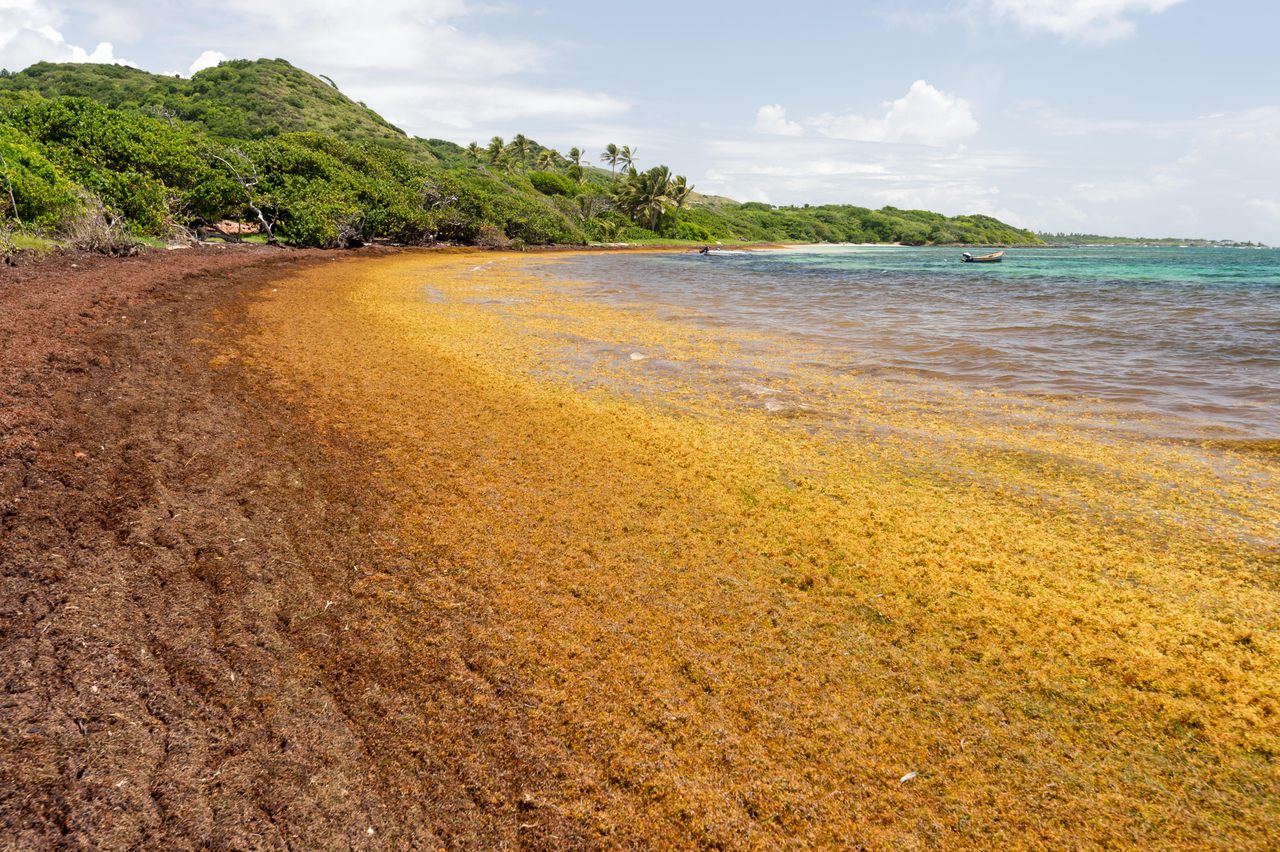 Around the world, sand and waves reveal and conceal all manner of finds—the stumps of ancient forests; bottles stuffed with messages; shells, large and small; the occasional lump of sea pork. Some of these sights are fleeting: The stumps might be visible only when the tide slinks out, for example, or a bottle may wash in one day, then vanish into the waves the next.

But on many beaches, you don’t have to look very hard at all to find huge, festering mounds of seaweed—especially the macroalgae known as sargassum. It’s a big, smelly problem, and researchers have recently suggested that it’s not going away any time soon.

Out in the open water—where the seaweed drifts freely across a region of the Atlantic called the Sargasso Sea—sargassum is a happy home for several creatures, including species of eels, shrimp, crabs, and Histrio histrio, also known as the sargassum fish. (It looks a whole lot like the seaweed, but with fins and eyeballs.) But when thick mats wash ashore, things get foul. The brown-gold plant sloshes up on the sand in thick, gloopy waves so dense that, from the air, it looks like soil. The seaweed stinks as it rots in the sun, attracting flies, imperiling sea-turtle nests and fish, and churning the stomachs of beachgoers, who help prop up the economy of many coastal communities.

Since 2011, the seaweed has made a mess across the tropical Atlantic, Caribbean Sea, Gulf of Mexico, and east coast of Florida. Sargassum has mounded up as much as four feet high in Antigua; the Mexican government funneled millions of dollars toward efforts to haul it from the country’s beaches; Barbados treated its inundated shores as a national emergency. Speaking to The Economist in 2015 about the smelly summits, Hilary Beckles, vice chancellor of the University of the West Indies, called sargassum “the greatest single threat to the Caribbean economy I can imagine.”

By analyzing satellite images collected over the past 19 years across the region they’ve dubbed the Great Atlantic Sargassum Belt, researchers led by the University of South Florida’s Mengqiu Wang have untangled some of the factors that contribute to the blooms—and predicted that shorelines will continue to be choked with seaweed.

It’s easy to spy on sargassum with satellites because the seaweed contains chlorophyll, a green pigment that reflects infrared light much more markedly than seawater does. (“To satellites that detect infrared,” Ed Yong wrote in The Atlantic, “sargassum blazes like a bonfire.”) That’s how the team computed that last year the belt contained more than 22 million tons of seaweed, sprawling from the Gulf of Mexico to Africa’s western edge.

It’s trickier to determine exactly why the blooms have gotten so huge. Sargassum isn’t a new plant on the block, but it has become an especially obtrusive neighbor over the past few years. In a new paper in Science, the researchers report that the blooms are probably fueled by several factors. “The ocean’s chemistry must have changed in order for the blooms to get so out of hand,” said co-author Chuanmin Hu, a USF oceanographer, in a news release.

The team suspects that the blooms are fed by fertilizers and other nutrients washing in from the Amazon River and nourished by upwelling from deeper waters off the coast of West Africa. The researchers found that the mats tend to spike between April and July, then dissipate by the end of October. When the water temperature is right and enough seeds persist from the previous year’s batch, the conditions are ideal for another supersized bloom the following spring.

The researchers note that the data is preliminary, and that they’re eager for more granular information. But for the communities that often find themselves digging out from a mountain of sargassum, the whole situation stinks.

“Based on the last 20 years of data,” Hu said in a statement, “I can say that the belt is very likely to be a new normal.”

Before America Got Uncle Sam, It Had to Endure Brother Jonathan

The Sargasso Sea Is Plenty Wide, and It's Growing

What happens when you have too much of a good thing.
turtles

Turtles Have Led Us to Their Secret Seagrass Meadows

Whether you call them gaps, rings, or fairy circles, these unexpected formations in seagrass beds are keeping scientists guessing.
flora

Riverside Nature Center is a 2-acre property that packs in over 200 species of wildflowers, grasses, and ferns, 140 species of trees, and a Monarch Waystation for butterflies to stopover on their way from Canada to Mexico.
Sponsored by  Kerrville Convention & Visitors Bureau
Video