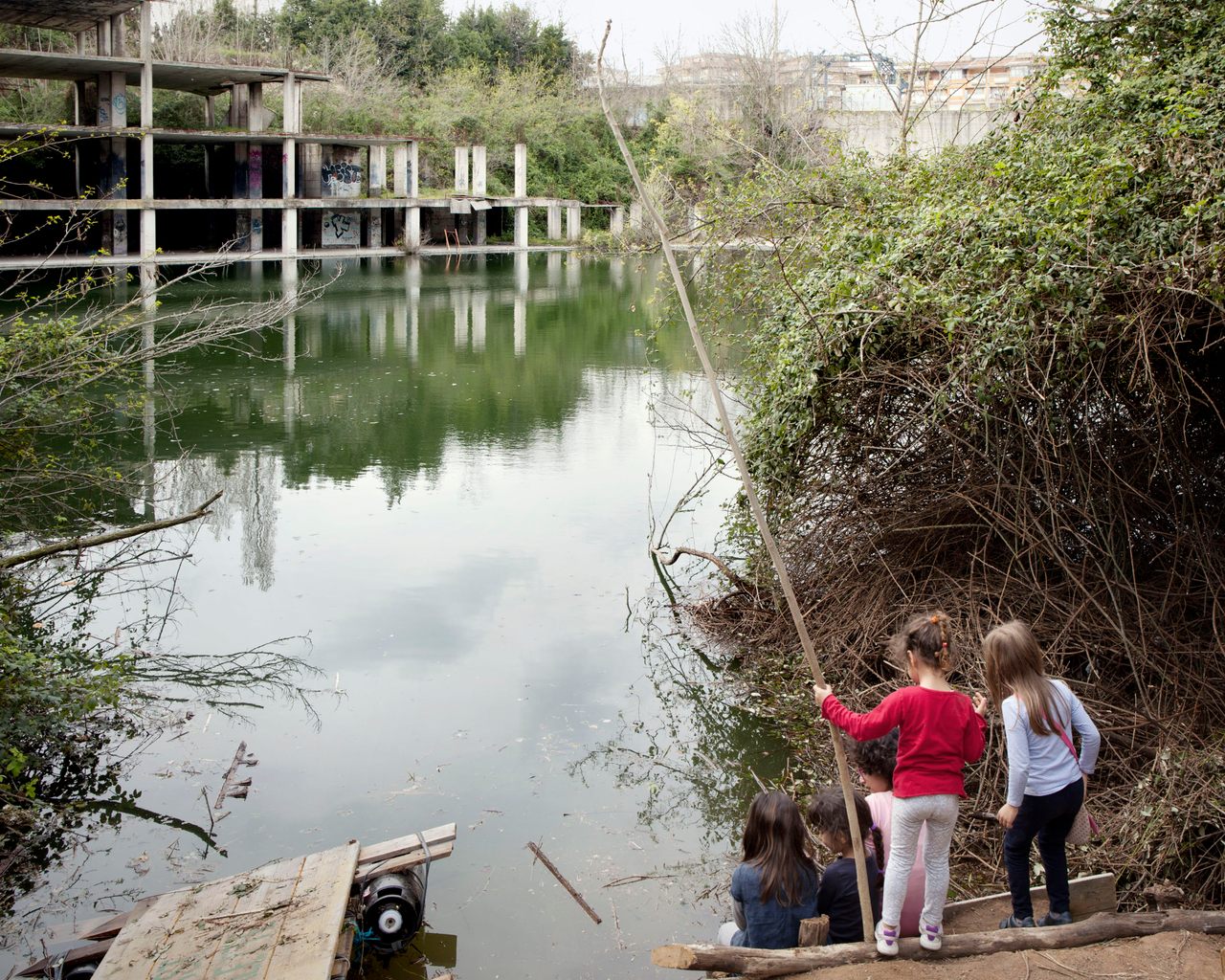 Children at the edge of Lago Ex SNIA, an accidental lake in eastern Rome that resulted from a construction error in the 1990s. Valeria Scrilatti/Contrasto/Redux
In This Story
Destination Guide

The story of Rome’s unlikeliest lake begins with fake maps, an angry community, and a patch of very dry land. In the 1990s, at a construction site just a couple miles east of the storied Colosseum, a crew was digging into the ground, excavating the site of a planned underground parking lot. It was part of a grand development project to turn a sprawling old textile factory, squeezed between train tracks and the busy Via Prenestina, into a massive, modern shopping center and business complex.

Members of the local community opposed the new construction. A local citizen’s group had filed a complaint against the project on the grounds it lacked proper authorization. But work continued, until the excavating crew nicked an aquifer—investigators later learned the maps used to plan the dig were counterfeit. The dig site flooded, as did the surrounding streets when attempts to pump out the water, or to divert it into the sewerage system, failed. The construction project was abandoned, and soon a lake rose around the skeletal, half-built mall.

Today, the lake goes by many names: Lago Bullicante, Lago Sandro Pertini, and Lago Ex SNIA, after the adjacent SNIA factory, shuttered in 1954 and now mostly overgrown and in ruins. Tucked into a corner of Rome’s trendy Pigneto neighborhood—previously touted as The Eternal City’s Brooklyn equivalent by both Vanity Fair and The New York Times—the lake’s dramatic creation isn’t even its most noteworthy chapter. Over the last three decades, Lago Ex SNIA has inspired filmmakers and musicians, galvanized environmentalists and community activists, and, during the grimmest days of the COVID-19 pandemic, provided a welcome refuge for Romans weary of lockdowns and loss.

“People started visiting the lake more and more” during the pandemic, says Marco Ferrari, 46, a local filmmaker whose most recent project is inspired by the lake. “It has been healing.”

With a surface area of about 7,000 square meters—roughly six Olympic swimming pools—and a maximum depth of seven meters, or 23 feet, the lake is not large. Spring-fed, its level is stable and its bacterial load low. While the water is not potable, it has been declared safe for swimming. The lake and surrounding undeveloped area are home to hundreds of plants and more than 60 bird species.

In July 2020, a portion of the site—roughly 18 acres, including the lake—was officially declared a natural monument, an “ecological corridor” in the middle of a dense urban area. Most of the area, however, is still privately owned and does not enjoy the same protected status. For years, developers have made sporadic attempts to salvage their investment: A few months before the natural monument declaration, bulldozers at the edge of the site ripped out trees, including Aleppo pines and other species that provide shelter to the adjacent park’s wildlife.

The uncertain future of the lake, park, and surrounding area has long been a rallying cry for environmentalists and other advocates for the urban oasis. In 2014, Italian hip hop group Assalti Frontali released the song “Il Lago Che Combatte” (“The lake that fights”), which brought national attention to the long-running tension between developers and environmental activists. Meeting in one of the old SNIA factory buildings that’s still standing, activists have organized public awareness campaigns and outreach events. In June 2020, for example, the group screened footage Ferrari created onto the concrete columns, remnants of the abandoned shopping center project, that still rise up from the lake. Local residents who feel protective of the lake serve as informal guards.

“It’s very impressive to see people themselves taking care of the lake and the park,” says Shiva Boroumand, a professional tour guide. She first visited the lake this spring and became interested in the social cohesiveness it seemed to promote in the neighborhood. “If I were to organize a tour of Rome for my family or friends, or even for tourists who I think would be interested in such places, I would bring them to Ex SNIA.”

While the lake has been an environmental cause célèbre for decades, it was only during the pandemic that locals really began to appreciate it as an escape from the asphalt and concrete of the surrounding city, says Ferrari. “It has been a nice secret,” he says, without regret for the lake’s newfound popularity. Its status as an urban oasis has reinvigorated the long campaign to obtain protection for the entire site, not just the portion that’s been declared a natural monument.

“It is a striking reminder of what people can do together when they refuse to reduce nature to resources and urban spaces to economic assets,” says Miriam Tola, a researcher in environmental humanities at Switzerland’s University of Lausanne. In a 2019 paper, Tola called the lake and the support galvanizing around it a transformative “cosmopolitical commons.”

She adds: “In spite of all difficulties, this has been a generative struggle that has created new relations among people and with the environment, with plants, birds, and the urban lake. The struggle has forged a new sense of place.”

Meet the Italian Brothers Who Grew the World's Biggest Cherry

The adorable appearance highlights an unexpected ally in conservation.
animals