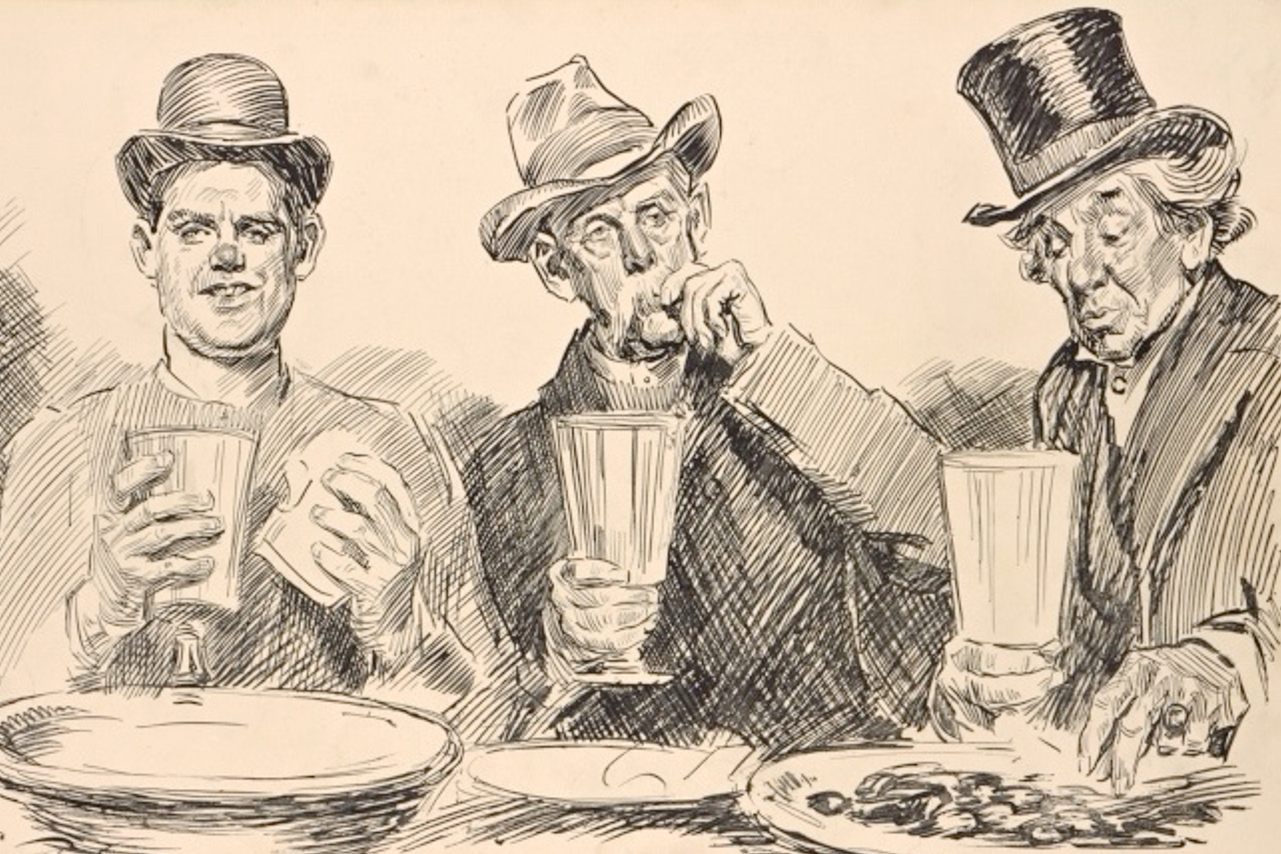 Three men feast on free lunch in this drawing by Charles Dana Gibson. Public Domain
In This Story
Place

Touching mementoes from those who didn't make it back from World War I still hang in one of New York's oldest bars.
Destination Guide

Near the end of the 19th century, New Yorkers out for a drink partook in one of the more unusual rituals in the annals of hospitality. When they ordered an ale or whisky, the waiter or bartender would bring it out with a sandwich. Generally speaking, the sandwich was not edible. It was “an old desiccated ruin of dust-laden bread and mummified ham or cheese,” wrote the playwright Eugene O’Neill. Other times it was made of rubber. Bar staff would commonly take the sandwich back seconds after it had arrived, pair it with the next beverage order, and whisk it over to another patron’s table. Some sandwiches were kept in circulation for a week or more.

Bar owners insisted on this bizarre charade to avoid breaking the law—specifically, the excise law of 1896, which restricted how and when drinks could be served in New York State. The so-called Raines Law was a combination of good intentions, unstated prejudices, and unforeseen consequences, among them the comically unsavory Raines sandwich.

The new law did not come out of nowhere. Republican reformers, many of them based far upstate in Albany, had been trying for years to curb public drunkenness. They were also frustrated about New York City’s lax enforcement of so-called Sabbath laws, which included a ban on Sunday boozing. New York Republicans spoke for a constituency largely comprised of rural and small-town churchgoers. But the party had also gained a foothold in Democratic New York City, where a 37-year-old firebrand named Theodore Roosevelt had been pushing a law-and-order agenda as president of the city’s newly organized police commission. Roosevelt, a supporter of the Raines Law, predicted that it would “solve whatever remained of the problem of Sunday closing.”

New York City at the time was home to some 8,000 saloons. The seediest among them were “dimly lit, foul-smelling, rickety-chaired, stale-beer dives” that catered to “vagrants, shipless sailors, incompetent thieves, [and] aging streetwalkers,” Richard Zacks writes in Island of Vice, his book-length account of Roosevelt’s reform campaign.

The 1896 Raines Law was designed to put dreary watering holes like these out of business. It raised the cost of an annual liquor license to $800, three times what it had cost before and a tenfold increase for beer-only taverns. It stipulated that saloons could not open within 200 feet of a school or church, and raised the drinking age from 16 to 18. In addition, it banned one of the late 19th-century saloon’s most potent enticements: the free lunch. At McSorley’s, for example, cheese, soda bread, and raw onions were on the house. (The 160-year-old bar still sells a tongue-in-cheek version of this today.) Most controversial of all was the law’s renewed assault on Sunday drinking. Its author, Finger Lakes region senator John W. Raines, eliminated the “golden hour” grace period that followed the stroke of midnight on Saturday. His law also forced saloon owners to keep their curtains open on Sunday, making it considerably harder for patrolmen to turn a blind eye.

The Raines Law took effect on April 1, 1896. Progressives scored its first weekend in action a bone-dry success. Bars closed Saturday at midnight; the liquor flow on Sunday slowed to a trickle. RAINES MAKES A THIRST, a New York World headline quipped. But while the teetotalers celebrated over lemonade, plenty of booze-deprived New Yorkers were fuming.

Behind this lifestyle tug-of-war lay a cultural conflict of national proportions. Those in favor of the Sunday ban, generally middle-class and Protestant, saw it as a cornerstone of social improvement. For those against, including the city’s tide of German and Irish immigrants, it was an act of repression—an especially spiteful one because it limited how the average laborer could enjoy himself on his one day off. The Sunday ban was not popular, to say the least, among the city’s Jews, who’d already observed their Sabbath the day before.

Opponents pointed out that existing Sabbath drinking laws were hypocritical anyway. An explicit loophole had been written into the law itself: it allowed lodging houses with ten rooms or more to serve guests drinks with meals seven days a week. Not incidentally, wealthy New Yorkers tended to dine out at the city’s ritzy hotel restaurants on Sundays, the usual day off for live-in servants.

Intentionally or not, the Raines Law left wiggle room for the rich. But a loophole was a loophole, and Sunday was many a proprietor’s most profitable day of business. By the following weekend, a vanguard of downtown saloon-owners were gleefully testing the law’s limits. A suspicious number of private “clubs” were founded that April, and saloons started handing out membership cards to their regulars. Meanwhile, proprietors converted basements and attic spaces into “rooms,” cut hasty deals with neighboring lodging-houses, and threw tablecloths over pool tables. They also started dishing up the easiest, cheapest, most reusable meal they could get away with: the Raines sandwich.

Law enforcement declared itself satisfied. “I would not say that a cracker is a complete meal in itself, but a sandwich is,” an assistant D.A. in Brooklyn told an assembly of police captains as the first Raines hotels sprouted up. Remarkably, the courts upheld these definitions of “meal” and “guest.” Reformers were understandably flabbergasted. The law itself was sound, Raines complained. It was the police and the courts that had made it laughable. He and his progressive allies had seriously underestimated just how far New Yorkers would go for a drink.

The court decisions were a turning point. With summer approaching, “Raines hotels” sprang up everywhere. By the next year’s election season, there were more than 1,500 of them in New York. Brooklyn, still a separate municipality at this point, went from 13 registered hotels to 800 in six months, and its tally of social clubs grew tenfold.

For the libertines of New York City, Zacks writes, the second half of 1896 was “too good to be true, a drunken daydream.” The hotel carve-out allowed drinks to flow at all hours. There was no obligatory last call, and the city’s liveliest drinking spots now offered cheap beds mere steps away. For Raines and the law’s other architects, this was the most alarming unintended consequence: their efforts to make New Yorkers virtuous had caused a spike in casual sex and prostitution.

The state government ratified a set of clarifying amendments a year later. The free-for-all atmosphere faded, albeit slowly. Still, for years following the passage of the Raines Law, a general state of confusion and case-by-case dealings reigned. Following a wave of enforcement in 1902, hotel proprietors arrived at a creative solution: charging a premium for the obligatory sandwich. The Waldorf-Astoria went the classy route, offering unwanted meat patties instead, but the result was the same: a 50- or 100-percent markup to each drink ordered. The police seem to have appreciated the clarity of this arrangement. As long as Sunday drinking remained “an expensive luxury,” the Times suggested, its excesses would be tolerated by the average upstanding citizen. And for many a Sunday drinker, even some of the poorer ones, the inflated tab was preferable to risking arrest in an illicit backroom. Raines himself saw this as “the only compromise that is possible in New York.”

The Raines Law tussle continued well into the 20th century. The New York Supreme Court ruled in 1907 that a Sunday meal must be ordered and delivered in “good faith” for the accompanying drinks to be legal. Under pressure, brewers started refusing to supply Raines hotels. A new state excise law in 1917 contained a minimum-room requirement that effectively prevented the opening of new ones.

But the Raines Law debacle was merely a prelude for what was to come. New York reformers had long allied themselves with the Anti-Saloon League, a civilian organization with Midwestern origins that would morph into one of the most powerful pressure groups in U.S. history. By 1919, the efforts of the ASL made nationwide Prohibition the law of the land, putting an end to such quaint half-measures as the Raines sandwich and replacing the Raines hotel with the speakeasy.

Grabbing a drink once meant moonshine in a neighbor's living room.
bars

Drinking eight pints of beer a day was once routine.
food

Explore the unexpected and tasty tradition of chinchorreo along the "Pork Highway" of Guavate.
Sponsored by Discover Puerto Rico
Video • AO Docs

The French deconstructionist had a weakness for baked goods.
Ithaca, New York

At this small shop off a dirt road in the forest, the specialty is eel the owner caught and smoked himself.
Staten Island, New York

Crammed into several rooms of a Staten Island home, this museum is a vodka-soaked paean to the pleasures of drinking.
Want to see fewer ads? Become a Member.
From Around the Web
THE GASTRO OBSCURA BOOK
Taste the World!
An eye-opening journey through the history, culture, and places of the culinary world. Order Now