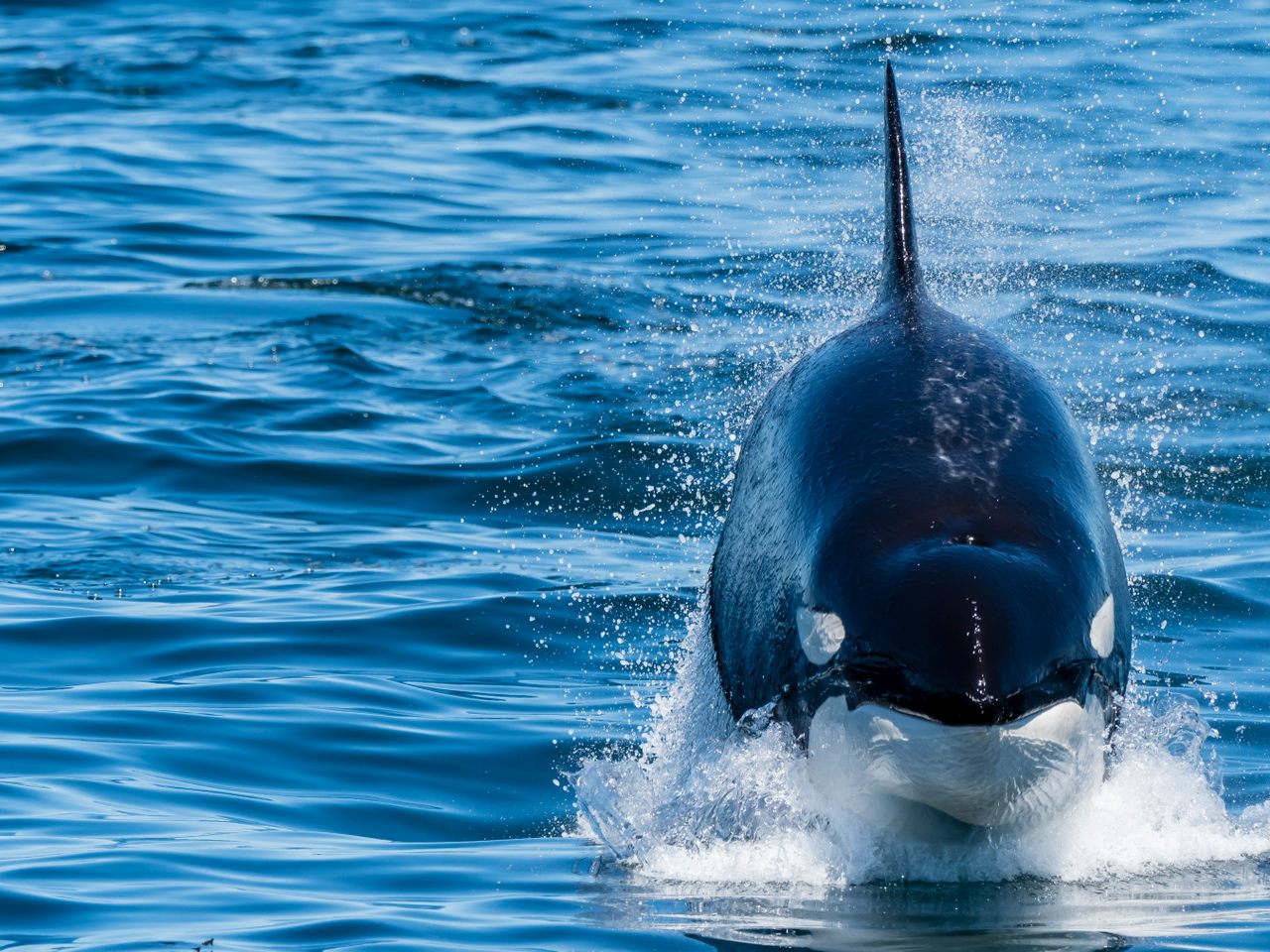 This piece was originally published in Canada’s National Observer and appears here as part of our Climate Desk collaboration.

There’s a mysterious killer whale that prowls deeper waters and specializes in hunting big game, research by a Canadian scientist suggests. West Coast residents are familiar with the iconic and endangered, chinook salmon-eating resident killer whales in the Salish Sea, and the more numerous Bigg’s killer whales, or transient orcas, that ply the shallower waters of British Columbia’s coast and inlets in search of seals and other marine mammals.

But growing evidence indicates there’s a population of orcas, known as outer coast killer whales, that are a distinct subgroup of transient whales, and which frequent the ocean depths along the continental shelf off the coast of central California and Oregon, says lead author Josh McInnes, a scientist with the Marine Mammal Research Unit at the University of British Columbia.

Once believed to be part of the larger West Coast population, these outer coast killer whales have a vocal dialect and culture distinct from their transient cousins, and they specialize in hunting big game, such as gray whale calves and massive elephant seals or sea lions as well as other smaller cetaceans in the open sea and around the Monterey Submarine Canyon, McInnes says. “It’s very, very complex and exciting, and we’re just starting to scratch the surface,” he says.

Identifying and cataloging 150 members of the outer coast population involved combing through more than 100,000 images and survey data taken over 13 years from Marine Life Studies, a non-profit organization, the National Oceanic and Atmospheric Administration, the Victoria-based Transient Killer Whale Research Project, and various whale-watching operations. More individuals are likely to be identified over time as research continues, McInnes says.

While most of the outer coast orcas seem to stick to the ocean south of Canada’s border with the United States, 26 members of the group have been sighted in British Columbia’s waters, mixing with coastal transient groups, McInnes says. The reverse is also true, with sightings of B.C.’s transient whales mingling with orcas from the coast group in the ocean south of the border.

“This is really exciting because this kind of shows how complex in nature these animals are, and that we still don’t know enough about their socializing and this connection between (them),” says McInnes.

The outer coastal killer whales may be traveling north to take advantage of the large seal populations in the northern waters, he adds, or the different whale populations may be sharing knowledge about other feeding grounds and hunting techniques. “It could be that we’re also seeing an opportunity for meeting and socializing in spreading the genetics between regions,” he says.

The outer coast whales specialize in hunting gray whale calves that migrate north with their mothers through California waters in the spring to arctic feeding grounds, and again in the fall when they return south to breed in Mexico.

“We believe them to be big whale hunters,” McInnes says. “It’s a fascinating event that happens every spring.” The orcas congregate in the ocean canyon at Monterey, particularly in April and May, to ambush the gray whales.

The hunts, though gruesome, are very dramatic as the orcas take turns chasing the gray whales to exhaust the calves, which can’t keep up. The killer whales work to separate the offspring from the adults and repeatedly ram the calves to incapacitate them.

If successful, the orcas will often feed on a calf for up to two days. The remains don’t go to waste, says McInnes, noting many marine organisms derive nutrients as the carcass sinks to the ocean bottom. He says that, when gray whales are absent, the outer coast killer whales predominately prey on California sea lions that can weigh up to 900 pounds and are capable of fighting back.

The pods rely on techniques similar to hunting gray whales, but they also throw the sea lions into the air as they try to tire and drown them. The orcas also prey on other smaller cetaceans, such as dolphins, porpoises, and minke whales, as well as seals.

More research is needed to sort out whether the outer coast whales are genetically different in some way from the transient orcas further north, and what other dividing lines beyond geography exist between the two groups.

There’s even emerging evidence to suggest that there may be an additional subtype of orca that inhabits the deep ocean, hundreds of miles offshore, McInnes says, though little is known about these “oceanic” killer whales—only 48 have been identified so far. This group of orcas don’t seem to be associated with other transient groups and are most commonly seen up to 200 miles offshore.

The oceanic whales often have a specific type of ocean barnacle on their dorsal fin, and tell-tale bite marks and scarring from a small parasitic shark with razor-sharp teeth called the cookie cutter shark, which frequents deep ocean waters far from shore.

These killer whales may form a population of their own, or they may be part of a transient orca community, says McInnes, noting it’s difficult to study killer whales given their speed and the distances they travel.

But more research is needed to study all orcas and their possible subgroups, he adds. “Understanding the population dynamics or community structure of a species is so important,” McInnes says. “It helps us set up specific management plans to protect killer whales—apex predators that are very beneficial to marine ecosystems.”

Lauded for her research on gentle giants of the sea, Andrea Marshall is using her fame to find hope for our troubled oceans.
temples

The region's first and only locally-run hatchery provides a boost for both fishers and the imperiled royal sea snail.
nature

No one was sure about the size of these almost-mythical wildlife events—until we got it all on camera.
Video • AO Docs