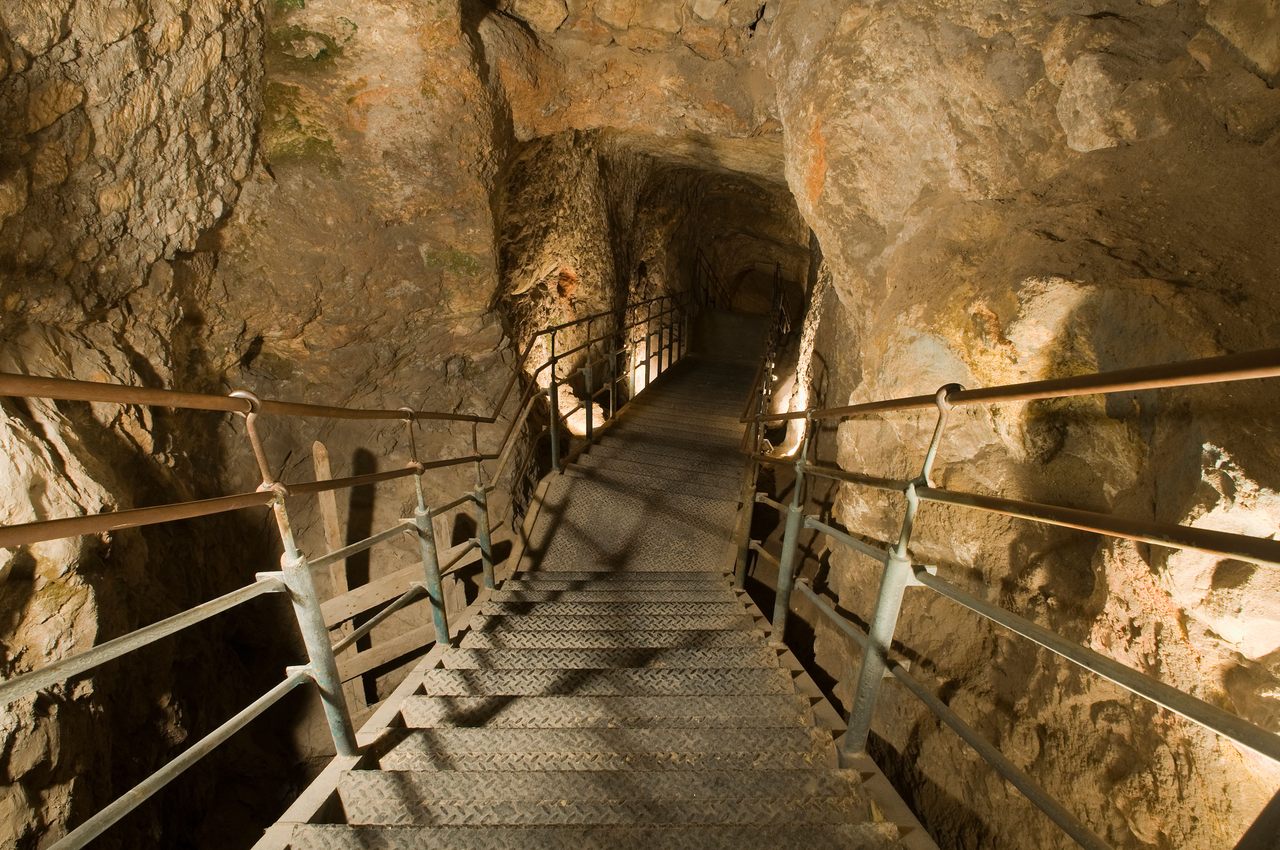 A tunnel in Warren’s Shaft System, which he and his team explored—not particularly safely. Eddie Gerald/Alamy
In This Story
Place

Descend 2,030 years into the past in an ancient tunnel built to support Jerusalem's most famous wall.
Destination Guide

Twilight falls on the City of David in East Jerusalem, while a film about Jerusalem’s past plays in a set of virtual reality goggles. In it, the kings of Judea are preparing for the Babylonian siege inside an ancient, virtual palace, the ruins of which are today, in the real world, underfoot. As the virtual soldiers close in on the virtual city, a scent fills the air—a real one, an invader from the modern world: marijuana. Then another real sensory experience, the voices of muezzins, rising from the mosques of Silwan, the predominantly Palestinian village in which the City of David archaeological site is located. Ruins, an ancient city rendered with technology, the smell of weed, the sound of prayer. These are the layers of Jerusalem.

Under the visible city today, there is another, of tunnels, pits, and cavities. This undercity is one of the world’s densest ancient archaeological sites. The City of David—the name now given to the site of the city’s first major settlement—is a part of it, outside the southern walls on the slopes of the Temple Mount. The site remains a sore point in the ongoing conflict over the identity, past, and future of Jerusalem itself. And among its most impressive features is deep below, a system of waterways that, improbably, have a connection to one of Victorian London’s most notorious moments—a connection that continues to color how the site is excavated, interpreted, and fought over.

In the fall of 1888, during the weeks-long reign of terror over the streets of London by the man who came to be known as Jack the Ripper, Britain’s more progressive news outlets were unkind to the head of the Metropolitan Police, a former officer in the British Royal Engineers named Charles Warren. The famous letters from the killer were sent to Warren and mockingly addressed “Dear Boss,” and he had been accused of incompetence and lack of experience. As victims emerged, he became a regular punching bag in the press. Finally, on the day that the body of the fifth (and last) victim, Mary Jane Kelly, was found, the papers published Warren’s resignation. The Pall Mall Budget bid him farewell with a cartoon: Warren falling over a wall representing Whitechapel, with a brief caption: “At Last.”

Occasionally, and perhaps perfunctorily, the newspapers sometimes mentioned that Warren had also been an archaeologist. Anxious Londoners, who were only interested in catching the Monster of the East End, didn’t care much for the fact that the man tasked with doing so had once helped uncover the secrets of an ancient kingdom.

Warren was a 27-year-old engineering officer when he was sent to dig in Jerusalem on behalf of the Palestine Exploration Fund, a society based in London that still operates today. “PEF was founded by Christian gentlemen from London who wanted to explore the Holy Land,” says Ronny Reich, a world-renowned archaeologist who has dug at sites discovered by Warren since the 1960s. “They couldn’t raise enough funds, because fantasies are one thing and facing reality, the heat and the dust, is another. Nevertheless, they left us a treasure trove of information on Palestine, which can be found today in the fund’s archives. To their credit, they also found the most suitable person for excavations in Jerusalem: Warren was a talented, precise, and daring engineering officer. Before coming to Jerusalem, he scaled the Rock of Gibraltar, which was too steep and dangerous to map.”

After receiving £300 from the PEF (the equivalent of nearly $50,000 today), Warren arrived at Jaffa on February 15, 1867, accompanied by three young corporals. From there they rode mules to Jerusalem. At this point, he discovered that these funds were the last of the PEF’s financial reserves, and in the years to come he invested more than double that from his own pocket to support the expedition. “Jerusalem under Ottoman rule was a small, dirty town,” says Reich, “but Warren dug there for three years, feeling like a kid who fell into a pot of chocolate.”

Warren’s famous finds reside today within the City of David site, and in the area of the Western Wall Tunnel. His team began digging even before being granted a permit by Ottoman officials, and that permit, when, it did come through, did not allow Warren to dig beneath the Temple Mount—though he later did anyway. Warren and his assistants, with worker teams from the villages of Silwan and Lifta, at first explored under the excavations that had been conducted earlier next to the Haram al-Sharif compound on the top of the hill, in places such as Wilson’s Arch and Robinson’s Arch. They discovered what came to be called Warren’s Gate, thought to be part of the first-century A.D. site of Herod’s Temple, which led into the Temple Mount. They also found the passage between the Hasmonean Channel, which supplied water there, and the Struthion Pool. This happened when Warren noticed a hidden opening leading into a dark space, a tunnel buried under dirt and debris, draining sewage from the houses above. The stench, he reported, was unbearable. Warren found some old doors, and he and his assistant used them to float over the dirty waters. “We laid the first door on the sewage, then one in front of it, taking care to keep ourselves on the door,” he later wrote in his book, Underground Jerusalem. “Everything had now become so slippery with sewage that we had to exercise the greatest caution in lowering the doors and ourselves down, lest an unlucky false step might cause a header into the murky liquid—a fall which must have been fatal—and what honor would there have been in dying like a rat in a pool of sewage?”

Warren and his team also dug a pile of earth to the south—now called the City of David. Next to it flows the Gihon Spring, the only natural water source inside ancient Jerusalem’s walls, which helped shape its character throughout history. The Canaanites built a great fort on top of it and dug waterways and pools, while the Judean kings built the Siloam Tunnel around it. Those subterranean tunnels, important remains of the water system attributed to biblical Jerusalem, had been buried for centuries.

“He was curious and eager, and went into every hole he could find,” Reich says. “He wasn’t satisfied with finding the source of the water, but tried to trace every space he found while excavating. The Gihon is a rhythmic spring, which does not flow continuously but in bursts that can drown anyone who gets inside. Despite this, Warren crawled in.

“The entry to a rocky tunnel inside the spring brought him, after about 20 meters, to a vertical cavity which opened above him,” Reich continues. “He wasn’t the first to visit this place. Other explorers and visitors have been there before 1867, but Warren was the first to dare and climb up the vertical shaft into the unknown. With the aid of Sergeant Birtles, he built a makeshift scaffold from wooden boards, and bravely climbed about 13 meters up the shaft. Warren entered for the first time into a large system of spaces hewn in the rock, which has since been named after him: the Warren’s Shaft System.”

Despite the prohibition on digging under Haram al-Sharif, or the “Noble Sanctuary,” Warren conducted clandestine activities there. He avoided attention by digging horizontal shafts, working at night, and bribing guards when necessary. By the end of June 1868, painter William Simpson documented the dangerous excavations. “Over the course of two weeks, Warren guided Simpson through the subterranean labyrinths beneath the Temple Mount/Haram al-Sharif and around the ruins of the ancient city,” writes the Palestine Exploration Fund in its website. “Together they scrambled through tunnels that Warren and his men had dug and caverns they had excavated, burning magnesium wire so that Simpson could draw in the darkness.” The teams had a succession of “lucky escapes,” when falling stones nearly crushed them.

In 1870, Warren stopped excavating and returned to England due to his health. He served in a variety of military capacities in South Africa between 1876 and 1885, and the next year he was appointed to lead the Metropolitan Police. As a military figure of some standing, Warren’s appointment was not initially met with dismay in the press, but the daring and acumen he showed as a young archaeologist made little impression when he was tried with one of the city’s most notorious crises.

Warren’s excavations cast a long shadow over today’s archaeological work in Jerusalem, including ongoing digs in Silwan. Excavation under Haram al-Sharif is still prohibited by Islamic authorities, but the City of David site on its slope has been managed since the 1990s by the Ir David Foundation, an association dedicated to strengthening the Jewish connection to Jerusalem. The foundation supports the settlement of Jewish families in the Muslim neighborhood, and has been accused of emphasizing the Jewish history of the site and overlooking its long, multicultural heritage. Another Israeli nonprofit, Emek Shaveh, which was formed to combat the politicization of archaeology and support cultural diversity, sees parallels between Warren’s illegal excavations with current excavations in the City of David, asserting that both seek the nature of Jerusalem underground instead of in the city today.

Reich has experienced this tension throughout his work there. “Christian explorers in the 19th century came here to follow in Jesus’s footsteps,” he says. “They all had a touch of fundamentalism about them.” Accordingly, over the course of his career, Reich has experienced pressure to influence the historic narrative from both Israeli and Palestinian researchers. He says that he works to be nonreligious and apolitical, which means he can draw criticism on all sides.

Warren, for his part, concluded, perhaps obliviously, in Underground Jerusalem: “It is a subject above all politics; It is a country connected with our religious life … and should be free to all.”

To uncover new clues about the secretive world of Mithraism, scientists considered evidence right at their feet.
churches

The discovery adds to our knowledge of Makuria, which ruled a vast region of Africa for six centuries.
politics

Destroyed by Fire in 1849, Canada's First Parliament Building Gives Up Its Secrets

Scientists know people were in Yukon 24,000 years ago. But what were they doing there?
Video