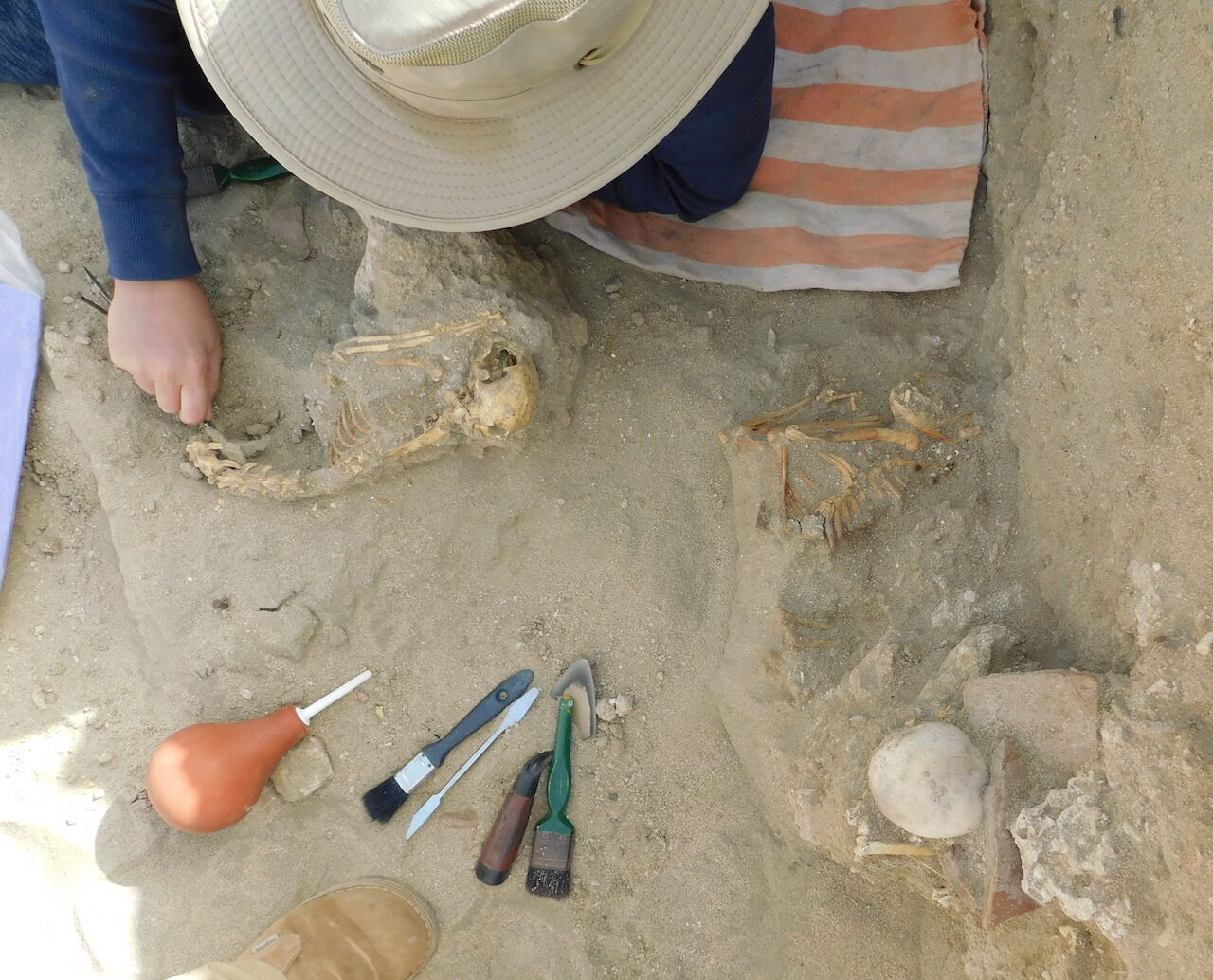 Berenice's history as a port may partially explain why so many cats were buried there. P. Osypiński/The Berenike Project: the Polish Centre of Mediterranean Archaeology, University of Warsaw, and the University of Delaware
In This Story
Destination Guide

In Egypt, a decade of excavations at the ancient Red Sea port of Berenice (Berenike) has revealed what some researchers are calling the world’s oldest pet cemetery. Nearly 600 animals, mostly cats, but also dogs and imported monkeys, have been found buried just beyond the walls of what was, almost 2,000 years ago, a bustling port. Many were laid to rest wearing metal or delicately beaded collars, their bodies covered in textiles or ceramics. But were they pets? And is this the oldest known site where humans bid their furry friends farewell?

“It’s something completely different than what we see elsewhere,” says Bea De Cupere, an archaeologist at the Royal Belgian Institute of Natural Sciences in Brussels. De Cupere has studied domesticated animals throughout the ancient world, including in Egypt, but was not involved in the Berenice excavations.

“I’ve seen thousands and thousands of bones in my career, and maybe 10 cats,” she says. In addition to the sheer number of skeletons, De Cupere adds, the manner of burial is unique. Unlike in the Nile Valley and other Egyptian sites, these animals were not mummified, and there is no evidence they were used for ritual purposes. She hesitates, however, to call Berenice a pet cemetery.

“It’s incredible the huge amount of skeletons they have found. But it’s difficult to know what’s behind it,” she says. She believes Berenice’s role as a busy port along a trade route is an important clue. In a project published in 2017, she worked with paleogeneticists to determine how the domestic cat spread from the Near East around the world. Based on analysis of ancient DNA, the team found that such shipping routes were the cat highways of the ancient world. Every ship, she says, would have had cats aboard to control vermin. Ports also needed the slinky hunters to patrol docks and storerooms.

“Berenice is a port, so pest control is important. These animals may not have been solely companions,” she says. “We just don’t know. ”

Robert Losey, an archaeologist at the University of Alberta, also questions Berenice’s claim to the oldest pet cemetery. “It’s a very interesting cemetery,” says Losey, who was not involved in the research. “But they’re very far from the earliest burials of animals that had clearly strong emotional bonds with their humans.”

Losey specializes in understanding the archaeology of human-animal relationships, and has done extensive fieldwork in North America and Siberia, including at several smaller but much older animal burial sites.

Around Russia’s Lake Baikal region, for example, more than 7,000 years ago, a hunter-gatherer culture buried dogs at multiple sites, suggesting the humans had a special relationship with their animals. Losey’s voice softens when he talks about the most famous of the dog burials, at a place known as Shamanka II, surrounded by mountains at the south end of the lake.

There, a slim finger of land juts into the water. On a hillside above it, archaeologists have found the remains of about 150 humans. “People weren’t residing there,” says Losey. “It was a special place where they brought their dead.”

The site includes the remains of a dog. “The people clearly gave it a funeral, treated it like a human, placing objects with it, including a large antler spoon that must have taken a hundred hours to carve and been very valuable,” he says. “To them it was a member of the family. It had a soul.”

Sites even older than Shamanka II exist. In southern Illinois, for example, the remains of three dogs at two different sites were intentionally buried about 10,000 years ago. Analysis of their teeth and bones suggests the dogs ate fish, which means they either were fed by humans or allowed to scavenge near human settlements.

While the Illinois trio represent the oldest dog burials in North America, at a quarry in Bonn-Oberkassel, Germany, researchers have found evidence of two dogs buried with humans more than 14,000 years ago. Lesions preserved in its bones suggests that one of the dogs suffered from distemper for weeks before its death, and must have required human care to live as long as it did. In 2020, at a site in southwestern France, archaeologists identified another intentional burial of at least two dogs, from about 12,000 years ago.

At Predmostí, in the Czech Republic, researchers have unearthed the remains of multiple canids, including one found with a piece of mammoth bone placed in its mouth. At up to 27,000 years old, the find may predate the domestication of dogs entirely. Whether it was an early dog or an ancestral wolf, it was not a pet as we understand the word today, but it may have been a companion of sorts. Though none of these has the scale of the Berenice site, any one could be considered an older pet cemetery—depending on how one defines what makes up a cemetery, and the relationships between humans and animals.

“The term ‘pet’ doesn’t really characterize the relationship with the animals that the people had,” says Losey. “People throughout Eurasia were burying animals that were used in herding and sledding and other activities. A relationship with a working animal has just as much potential, or more, for building really close social bonds as keeping an animal for companionship [alone].”

De Cupere agrees that it’s difficult to determine whether any ancient remains belong to a companion animal or working animal that was valued as critical to its humans’ survival.

For example, two cat skeletons more than 5,000 years old were found at Quanhucun in central China. One of the animals, which died in old age, ate a significant amount of millet—an unusual diet for cats, which are carnivores. A 2013 paper in the journal PNAS concluded that the elderly cat may have been fed and cared for by humans. But does that alone mean it was a pet?

She notes that while intentional, reverential burials of animals have existed for thousands of years, they are the exception rather than the norm.

“Cats and dogs are always a rare find in archaeology,” says De Cupere. “When I find a dog in the archaeological record, it’s mostly one that’s been thrown away, dumped in a pit, without any ritual.”

That alone makes the Berenice discoveries stand out. And when we do find evidence in the archaeological record that people shared a bond with their animals, it can resonate in a deep way.

“I think it’s the commonality we feel with the ancient past, with people who loved their animals,” says Losey. “We see it going back to Oberkassel [the site in Germany]: dogs who suffered ailments, had broken ribs, lost teeth, experienced trials and tribulations of all kinds. These dogs would not have lived very long without human care. Seeing traces of that dog’s life, you see the suffering, but you see the care at the same time.”

Whether under the hot sun beside a busy port or on a quiet bluff surrounded by mountains and Siberian taiga, the idea of ancient humans laying an animal to rest with care is one that modern animal lovers recognize and empathize with—but should also be wary of overinterpreting. De Cupere cautions against projecting our own beliefs and values onto any site where animal remains are found, even today.

“When my elderly neighbor’s dog died, he buried it in his garden, but there was no emotional bond,” she says. “He just didn’t want to pay for it to be picked up and cremated.”

With proper training, dogs can follow their noses to human and animal remains from bygone centuries.
animals

During the 1918 Flu Epidemic, Pet Parents Put Masks on Their Cats

Yancia the bulldog even made the local paper: "This Seattle Dog Wears Flu Mask."
science

Sled Dogs Have Long Been Central to Life in the Arctic

12 places to marvel at the history of human language.
Video

3:38
Want to see fewer ads? Become a Member.
From Around the Web
Atlas Obscura Trips
Searching for Russia’s Northern Lights
View This Trip
Thanks for sharing!