There Are Way More Copies of Newton's Masterwork Than Anyone Thought - Atlas Obscura
Want to see fewer ads? Become a Member. 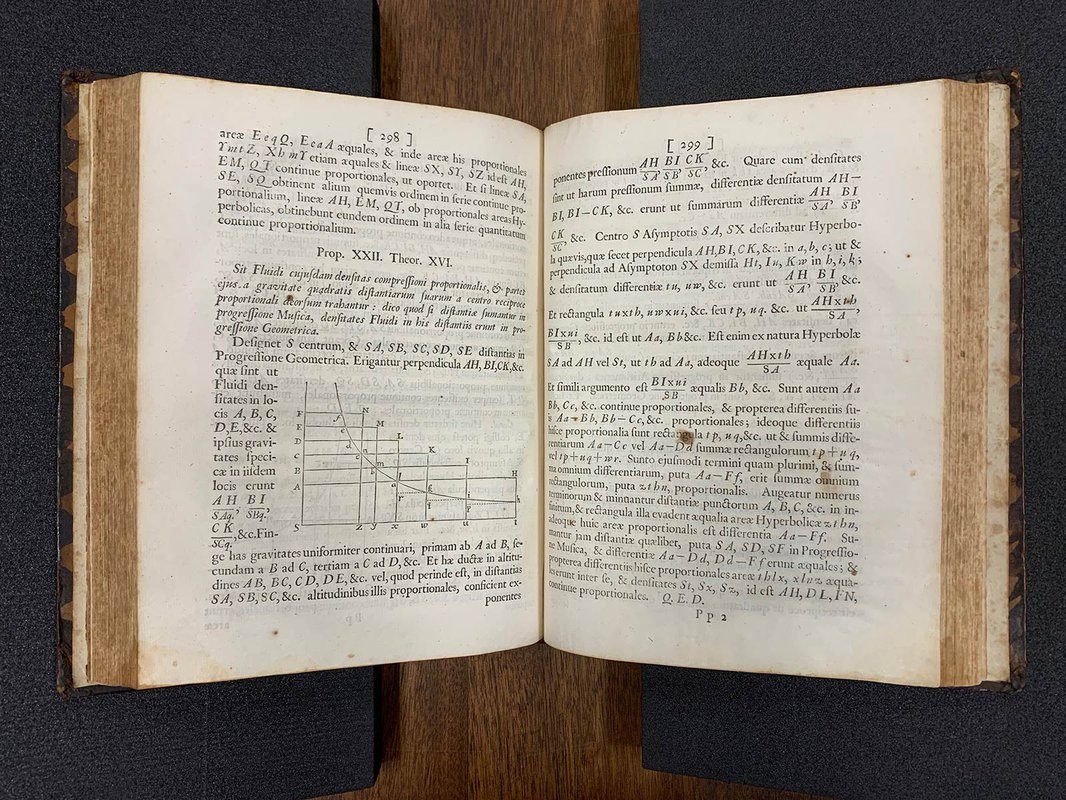 Caltech's copy of the Principia was owned in the 18th century by French mathematician and natural philosopher Jean-Jacques d'Ortous de Mairan. Caltech Archives

The impact of Isaac Newton’s scientific work is legendary today, and now it appears that his groundbreaking treatise of 1687 reached a wider audience during his own time than was previously thought. The tome, known as the Principia, transformed human understanding of celestial and terrestrial forces, providing a mathematical basis for the movement of planets, moons, and comets, as well as objects on Earth. A new archival census has more than doubled the known number of first editions of the book, including the first ones located in Asia.

“The Principia is perhaps one of the three most revolutionary books of ideas in the last 500 years, the others being those by Darwin and Einstein,” says Mordechai Feingold, coauthor of a paper on the effort, published in the Annals of Science, and a science historian at the California Institute of Technology. “Newton was the first one who basically managed to unify the celestial and terrestrial fields under a single law—the law of universal gravitation.”

Nearly 200 first editions of the Principia were newly identified in the survey, bringing the total known number to 386. The volumes cover 27 countries on five continents, including Africa and Australia, with many residing in the libraries of major universities or in national libraries. (The authors hope that the census, which they deem preliminary, will draw out more private owners of early editions.)

Nine copies turned up in Japan, likely the result of 20th-century book collectors and scholars acquiring them, says census coauthor Andrej Svorenčík. He was surprised to discover a copy in his home country of Slovakia, in a library full of rare books, and another in the library of a Swedish high school founded in the 16th century. “I have so far found only one castle library with a copy,” he notes—the opulent Nové Hrady chateau in Czechia—a onetime private collection that is now state property.

Until now, the size of the Principia’s first edition had been thought to be small—around 250—based on a 1953 census that put the number of copies at 189. That figure partly reflects a long-held notion that the book, formally titled the Philosophiae naturalis principia mathematica (Mathematical Principles of Natural Philosophy), was virtually incomprehensible outside of a small circle of expert mathematicians. But the new census suggests that the hefty volume, at 500 pages and written in Latin, may have had a broader audience.

“We want to mitigate the notion that this is a book nobody read,” says Feingold. He and Svorenčík now estimate that the first-edition run numbered between 500 and 600 copies.

Behind the pages of the Principia, in which Newton laid out his three laws of motion, is an intriguing history that involves the astronomer Edmond Halley and other eminent figures. Most famous today for the comet that bears his name, Halley sought Newton’s input on the shape of planetary orbits, a question that Halley and his colleagues had been puzzling over. Excited by Newton’s answer (an ellipse), and even more so by a paper he later sent to show his calculations, Halley pushed Newton to write the Principia, then funded its publication and was key to promoting it. (Newton’s work enabled Halley to accurately predict that a comet observed in 1682, 1607, and 1531 would return in 1758. It did.)

After seeing the book through the printing process, Halley sent Newton—then at the University of Cambridge—20 copies, “bound in calves’ leather,” to share. Halley also took it upon himself to present copies to influential people, including England’s King James II, Royal Society President Samuel Pepys, and German polymath Gottfried Wilhelm Leibniz, who is commonly credited with co-inventing calculus at the same time as Newton. A copy also likely went to Christopher Wren, architect of St. Paul’s Cathedral in London and a respected astronomer and mathematician.

With time, copies of the Principia (which Newton revised for a second edition in 1713 and a third edition in 1726) traveled beyond the spheres of science and learning in Europe. “In the 19th century, early copies arrived in South Africa and Australia, when people from England moved to those colonies and brought their libraries with them,” says Svorenčík, a postdoctoral researcher at the University of Mannheim in Germany. Educational institutions in the United States also started to expand and acquire important books from Europe.

A collector’s item by the 19th century, first editions of the Principia have fetched impressive prices at auction, including the record for a printed scientific book: $3.7 million, at Christie’s New York in 2016. (The copy reputed to be the presentation volume for King James II sold for $2.5 million at Christie’s in 2013.)

It has also made the Principia a target of theft. In the early 1990s, a copy was stolen from the Massachusetts Institute of Technology, and in 2017, a copy valued at nearly $1 million was found to be missing from the Carnegie Library of Pittsburgh—part of a stunning $8 million heist conducted over 25 years. (Fortunately, a rare-books seller in London recovered that volume from a buyer after learning it was stolen.)

Such a precious book of knowledge also carries intangible value. “In a sense, the Principia unified all the work that was done for the previous hundred years,” says Feingold. “It took Newton to put together the ideas that Kepler, Galileo, and Descartes had put forth insofar as heavenly bodies are concerned, to realize that the Earth is a planet like any other planet and there’s a mutual attraction between all those heavenly bodies.”

Feel free to judge these books by their covers.
libraries

The bookwheel helps readers browse eight texts at once. The only problem? It weighs 600 pounds.
objects of intrigue

Book waste can be beautiful.
Video • Object of Intrigue