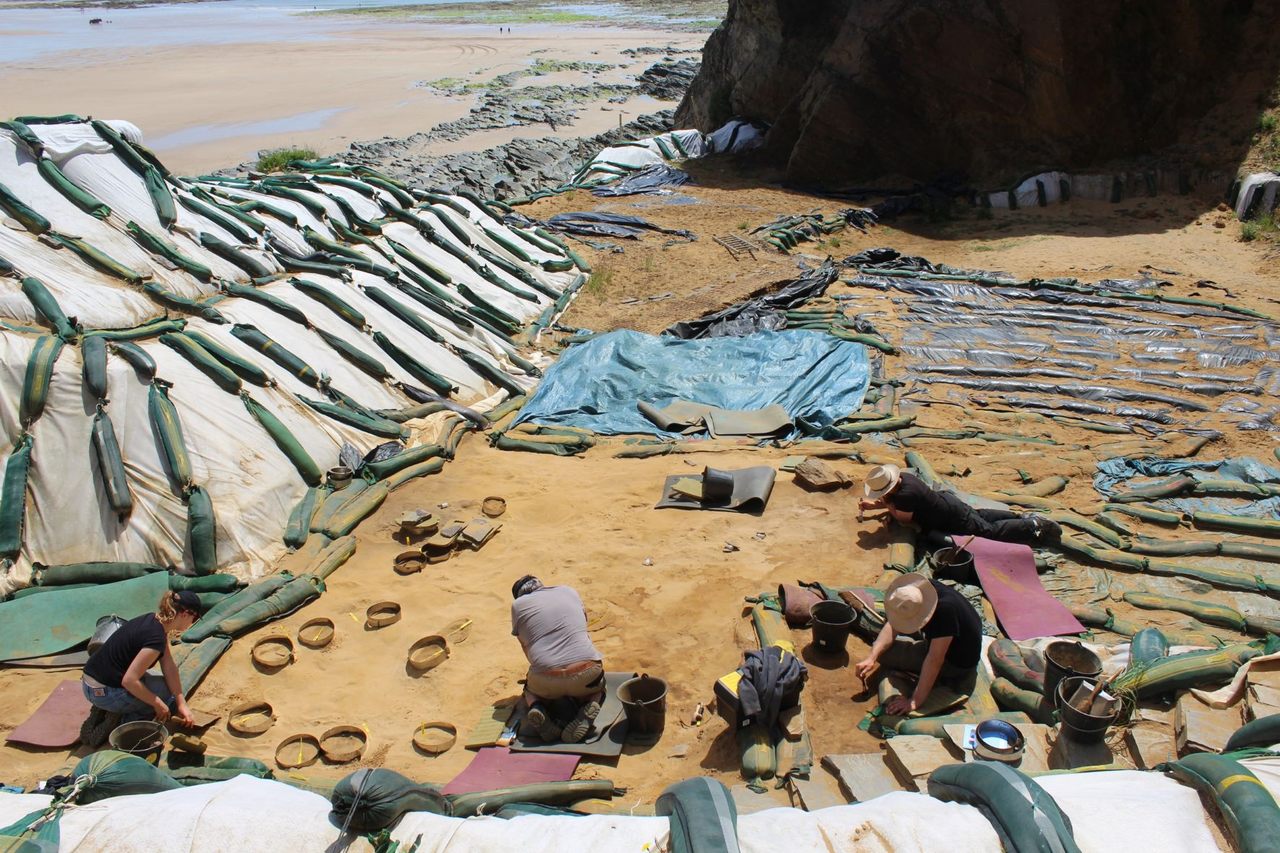 The Le Rozel site in Normandy, which has yielded hundreds of Neanderthal footprints. Courtesy Dominque Cliquet
In This Story
Destination Guide

Of the variety of ancient hominins who have roamed this planet, Neanderthals are among the most recently departed. Long stigmatized as lumbering, backwards versions of us—think “caveman” and all that implies—scholarship is increasingly overwriting this view. Neanderthals, it turns out, were culturally and socially complex beings (who interbred with humans for thousands of years).

We know what we know about Neanderthals from a sparse fossil record and a healthier lithic one, but a new discovery, published today in Proceedings of the National Academy of Sciences, has advanced our knowledge by baby steps—many, many baby steps. Ossified in the escarpments of Le Rozel, in Normandy, France, are hundreds of footprints of our close relatives, including those of children.

“The footprints were preserved by being quickly covered by sand brought by the wind,” says Jérémy Duveau, a paleoanthropologist at the Museum of Mankind in Paris and coauthor of the study.

Formed 80,000 years ago, the prints were made by about a dozen Neanderthals, who occupied the site seasonally. At Le Rozel, archaeologists also found evidence of stone tool making, and a butchery area where they processed carcasses they hunted or scavenged. There were even handprints, too, Duveau says, “maybe [caused by] individuals leaning on the ground when they are sitting, or when they wish to stand up.”

“I love footprints because they’re a moment in time,” says William Harcourt-Smith, a paleoanthropologist affiliated with the City University of New York and the American Museum of Natural History. “When we have a fossil, we can infer things about its behavior, but we can’t really say much about what it was doing in any one particular moment of time.”

Though no Neanderthal bones were found on the site, Duveau’s team was able to estimate the ages of the members of the group based on the size of each footprint—from what would today be a men’s size 11 to a baby’s size four. Most of the individuals at the site were children and adolescents, with the youngest being about two years old.

Whether the site was a sort of Pleistocene playground or something else is hard to say based on the footprints alone. Though prints of Neanderthals and even young ones have been found before, at the Greek cave of Theopetra in 1996, the Le Rozel site is the largest trace fossil site of any ancient human species, much less Neanderthals. In a fell swoop, the discovery at Le Rozel now makes up 95 percent of all known Neanderthal footprints.

“It is currently impossible to know exactly why there were so many children at Le Rozel,” says Duveau. “We can only make assumptions.”

Duveau says the children may have stayed while the adults went off-site to conduct tasks. It remains one of the big questions as work on the site continues. The seasonal camp at Le Rozel is a complex social tableau frozen in time, and a portal into Neanderthal life.

“Overall, it’s a lovely discovery,” says Harcourt-Smith. “The big question is how much it can really tell us.”

Children and even infants joined adults in making their marks, say archaeologists.
science

The self-taught naturalist found a site that would transform scientific views about Native Americans in North America.
List