Why 'Nature Is Healing' Might Be the Best Pandemic Meme - Atlas Obscura
Want to see fewer ads? Become a Member. 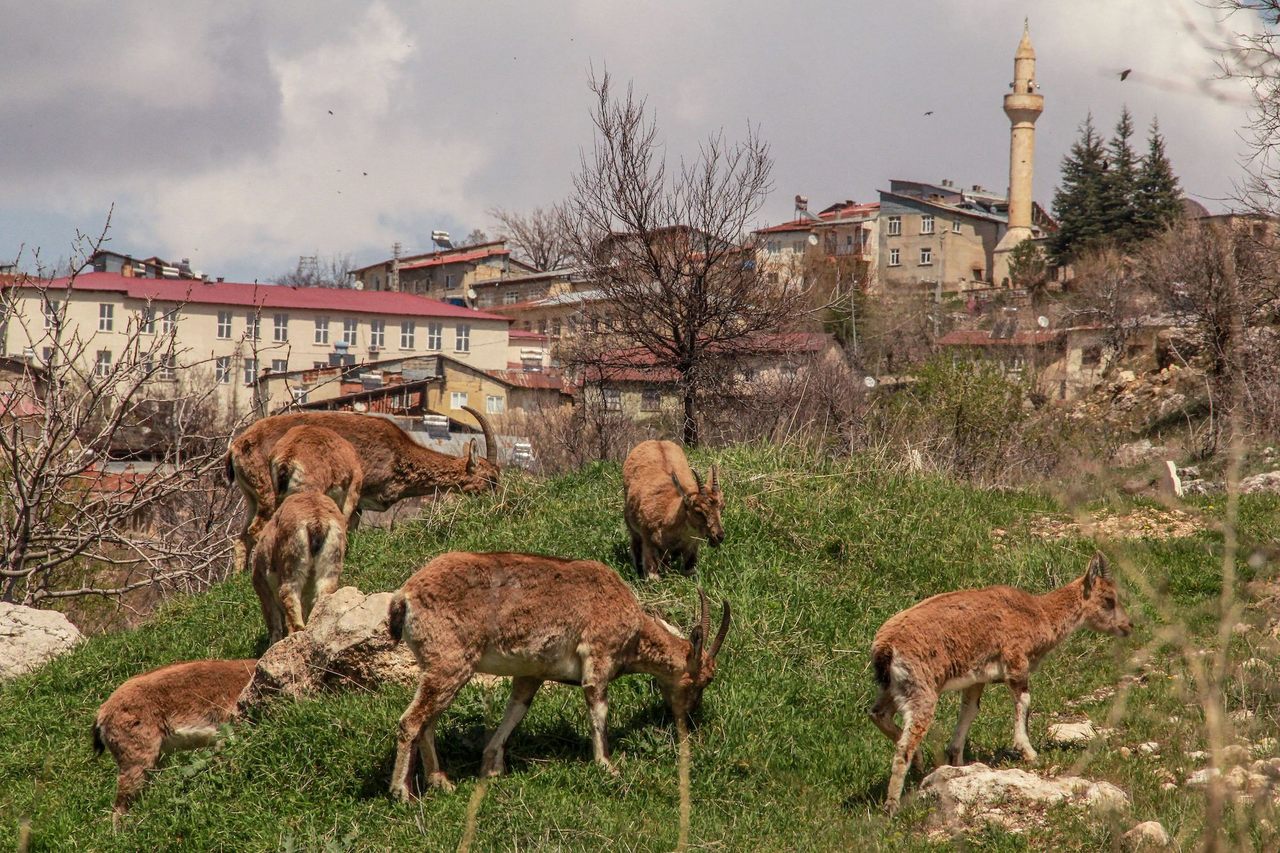 In the Turkish city of Çemişgezek, mountain goats left the Munzur mountains and began grazing in town. ALI HAYDAR GOZLU / AFP via Getty

Nature has been showing up in places you never expected. Dinosaurs roaming Times Square? A bunch of Lime scooters abandoned in a lake? According to the internet, the appropriate response to these situations is “Nature is healing.”

The memes started in earnestness. As the coronavirus pandemic tightened its grip on our lives earlier this year, people were suddenly stuck in their homes. With fewer cars on the move, streets were eerily quiet, and city dwellers started hearing birdsong. This lockdown period, now dubbed the “Anthropause,” temporarily improved air pollution around the world. Seismologists said that the absence of traffic quieted the Earth’s upper crust. Even carbon dioxide emissions took an unexpected dip. People latched onto reports of wild boars taking to the medians of Barcelona, goats commandeering the streets of a Welsh town, and a thousand monkeys brawling in a formerly touristy city in Thailand.

“It’s one of the COVID memes for sure,” says Gretchen McCulloch, an internet linguist and the author of the bestselling book Because Internet: Understanding the New Rules of Language. “I think it pretty quickly became this sort of parody version of itself.”

Some stories in this genre were fake. Dolphins, for example, did not “return” to the canals of Venice. Elephants never passed out drunk from drinking too much corn wine in the tea garden of a Chinese village.

These images were often captioned “nature is healing, we are the virus.” That rings of environmentalism’s dark side. The idea that human suffering is good for the planet is reminiscent of what’s been called “ecofascism,” or using oppression for purposes like climate action or conservation. In the 20th century, conservationists used this logic to justify eugenics and anti-immigration policies.

The earliest known “nature is healing” meme pushed back on this rhetoric with irony. On March 26, Ronnie Becker, a student in Minneapolis, shared an image of rideshare scooters submerged in a lake. She posted it because she was “annoyed” by the spread of “we are the virus,” and also happened to hate the scooter-share business, she told BuzzFeed News.

It went viral, and suddenly everyone and your grandma was using “nature is healing” to explain the abundance of squirrels in their local park. It became a stock phrase that got repeated in different contexts, from commentary on city living to pop-culture references. McCulloch compared the meme to the comic-strip-style image where a dog sips its coffee inside a room engulfed in flames, saying “This is fine.” It tends to be used in situations where things clearly aren’t fine—rather, they’ve gotten so bad that your brain turns off, unable to grapple with the reality you’re facing.

“Nature is healing” is a way of injecting a little levity into the situation. People are stuck at home, bored, and “trying to find some ironic optimism in this objectively pretty terrible situation,” McCulloch says.

Perhaps the proliferation of fake stories about nature rebounding was also a way of finding hope while dealing with a pandemic that arrived during a slow-burning ecological crisis. (People got very upset at the fact-checkers, after all.)

“I was really, really touched by the fact that people wanted so much for there to be dolphins in the canals in Venice,” says Alan Weisman, the author of The World Without Us. The book, a bestseller from 2007, imagines how the natural world would take over what we’ve built, pulling down bridges and submerging cities, if humans disappeared one day with a snap. “Say a Homo sapiens-specific virus—natural or diabolically nano-engineered—picks us off but leaves everything else intact,” Weisman mused in the book.

As governments ordered people indoors this spring, Weisman started getting a lot of emails. People were telling him about bird songs, animal sightings, and empty streets. “So much of these communications were wistful,” he says. “It was like, ‘Wow, isn’t this lovely?’” He says that people are desperate for a connection to the outdoors, and some respite from the sounds of the city. “It’s like we have some genetic memory of how nature once was before we started to trash it or maul it,” he says. “And something in us just misses it so much.”

Then he started getting a barrage of press requests asking him to talk about his book coming to life, first from news outlets in Italy, and later Spain, Taiwan, Argentina, and more. “It wasn’t that I had the realization, ‘This looks like The World Without Us,’ but everyone was telling me,” Weisman says. He lives in a small town in rural New England, surrounded by forests and sheep farmers. “Nothing really has changed much here,” he says.

As lockdowns gradually lift, bumper-to-bumper traffic and carbon emissions are rebounding. China’s air pollution has overshot pre-pandemic levels, with other countries soon to follow. But it looks like even as smoggy skies return, the “nature is healing” memes are sticking around.

“I’m glad that people are finding ways to keep laughing,” Weisman says, “because laughter is really one of the most healing things that human beings know how to do.”

Researchers are hoping to use the opportunity to get a better handle on their language.
forests

Tragedy set Sicelo Mbatha on a course to understand, and make peace with, the wild on its own terms.
islands