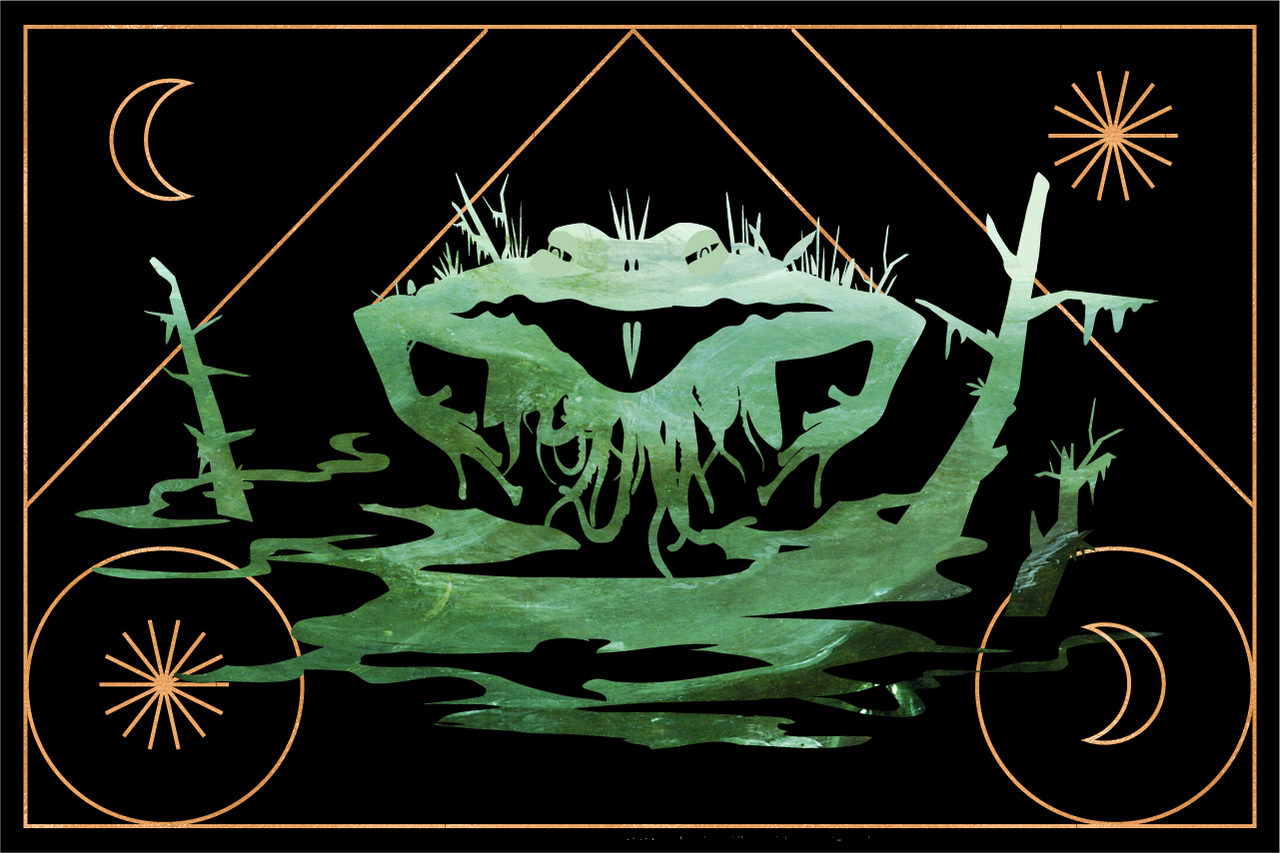 The vodyanoy was the traditional explanation for watery misfortune. W. Staehle / Unusual Co.

During the reign of Tsar Nicholas I in the mid-19th century, there lived a farm laborer with three sons, the story goes. The youngest, Ivan, was foolish and lazy. When it was time to mow, he dropped his scythe and slept in the hay. When it was time to fish, he paddled around the lake and did not cast his net even once. One cold, dark spring night, Ivan was returning home from a nearby village, his boots thick with mud. He walked through the fields until he heard the rushing river, swollen with melted snow, and approached it to cross.

A voice called to him from the river: “I have woken from my winter sleep. Give me a tribute, and I shall carry you to the other side on my back, unharmed.” Ivan replied, “River King, I have nothing, but I would like to be carried all the same.” A creature emerged halfway from the water. His eyes burned red, but his skin was the color of the river, and his beard was like moss. Ivan grew frightened as he saw white ice bobbing in the torrent. Before he could make the sign of the cross, the cold water rose up and pulled him in.

The next day, Ivan’s father looked into the river. There, under the water, he saw his son, his arms and back lacerated, his neck and face swollen blue and purple. But Ivan was working as he never had in the land of the living: tilling the riverbed and pulling heavy rocks for the vodyanoy.

The vodyanoy—literally, “the one in the water” or “water entity”—is a spirit found in rivers and lakes in Russian and Slavic legend. He is usually represented as a grandfatherly merman with monstrous features: a frog-like face, a long beard, scaly gray-green skin, and the tail of a large fish. Generally understood to be male, the vodyanoy is often attended by a retinue of naiads (water nymphs), an aquatic wife, or both.

Over centuries, Slavic folk traditions have faded dramatically in the face of political disruption, revolution, and generational shifts. But the vodyanoy endures, and its legends still circulate among Russians and Eastern Europeans of all ages. Most agree that he is a malicious spirit. “They prefer lakes known to have [a] traitorous nature like dangerous shores, deep torrents, and such,” according to one Russian local who wished to remain anonymous. “Long story short, whatever bad things happen near water, including swamps, it’s their doing.” The vodyanoy can pull people and animals underwater, break dams, drown crops, and wash away mills. And any “physical damage on [the] body of a drowned [person is] often considered a result of a beating taken from vodyanoy.”

Russian peasants maintained a belief that anyone who dared to approach a body of water after dark risked a vodyanoy attack—though, of course, staying away from icy rivers in Siberia at night is good advice for everyone. This belief was documented by Maksimov Sergey, a 19th-century ethnographer who compiled a swath of peasant folktales and theology in Unclean, Unknown, and the Power of the Cross (1903)—a meticulous, unfinished masterwork that has become a valuable source of pre-Revolutionary folk tradition. Of the vodyanoy, he wrote:

The ill-will of the vodyanoy towards people, the evil character of this demon, is expressed in the fact that he tirelessly watches every person who, for any reason, enters his damp domains. He carries away to his underground rooms, forever, everyone who takes it into his head to swim in rivers and lakes in the summer, after sunset, or at noon, or at midnight.

According to Sergey’s sources (“clever and keen-sighted millers … from Smolensk”), vodyanoy appeared “in human form with long toes on their feet, with paws instead of hands, with two, fair length, horns on the head, with a tail back, and with eyes burning like a red-hot coal.” He could also appear as overgrown grass, a man in a red shirt walking along the shore, a pig, or a large fish.

In Northern Russia, the legend includes a Vodyan Tsar, who appears as an old man armed with a club with the power to control the weather and shape the landscape with water. He rises to the sky on a black cloud, creating new rivers and lakes at will.

In Czech and Slovak folklore, the vodyanoy is markedly different. The Czech version has a more human appearance, except with gills, webbed fingers, and pale green hair. A Slovenian Redditor, u/pp86, states “I’ve heard of ‘povodni mož,’ some kind of a water-dwelling man, who’d steal people (women) and [keep] them in his underwater palace. But I don’t think he stole souls, as he needed them alive to keep him company.”

Regardless of their form, the various forms of this spirit, or vodnik, are universally considered to be proud and demanding. Fishermen, millers, farmers, and even beekeepers once left offerings to calm them, asking the water kings to please refrain from washing out their livelihoods each season.

Like many creatures that come from folk traditions, the vodyanoy has also adapted to Christianity. Scholars of Russan folk culture have noted many similarities between pre-Christian pagan myths and the suppressed, transformed versions of those myths that persist as folklore. In many accounts, “vodyanoy” and “devil” appear interchangeable, and more than a few Russian folktales involve the vodyanoy in direct conflict with an Orthodox priest.

Another belief holds that those who commit suicide by drowning should not be given Christian burials. The vodyanoy, after all, retains hunting privileges within his domain, and gets to keep his victims.

Unsurprisingly, the only way to protect oneself from the vodyanoy—besides steering clear of bodies of water—is to wear a crucifix and cross yourself before approaching a river. As Sergey writes, the vodyanoy “at the speed of lightning carries away into the depths of all who have forgotten, when immersed in the water, to cross themselves with the sign of the cross. With special triumph and pleasure, he drowns those who do not wear body crosses at all, forget them at home, or take them off their necks before swimming.”

A "terrifying pantheon" of ogres, sorcerers, and malevolent mermaids reflects a diversity in geography and environment.
mythology