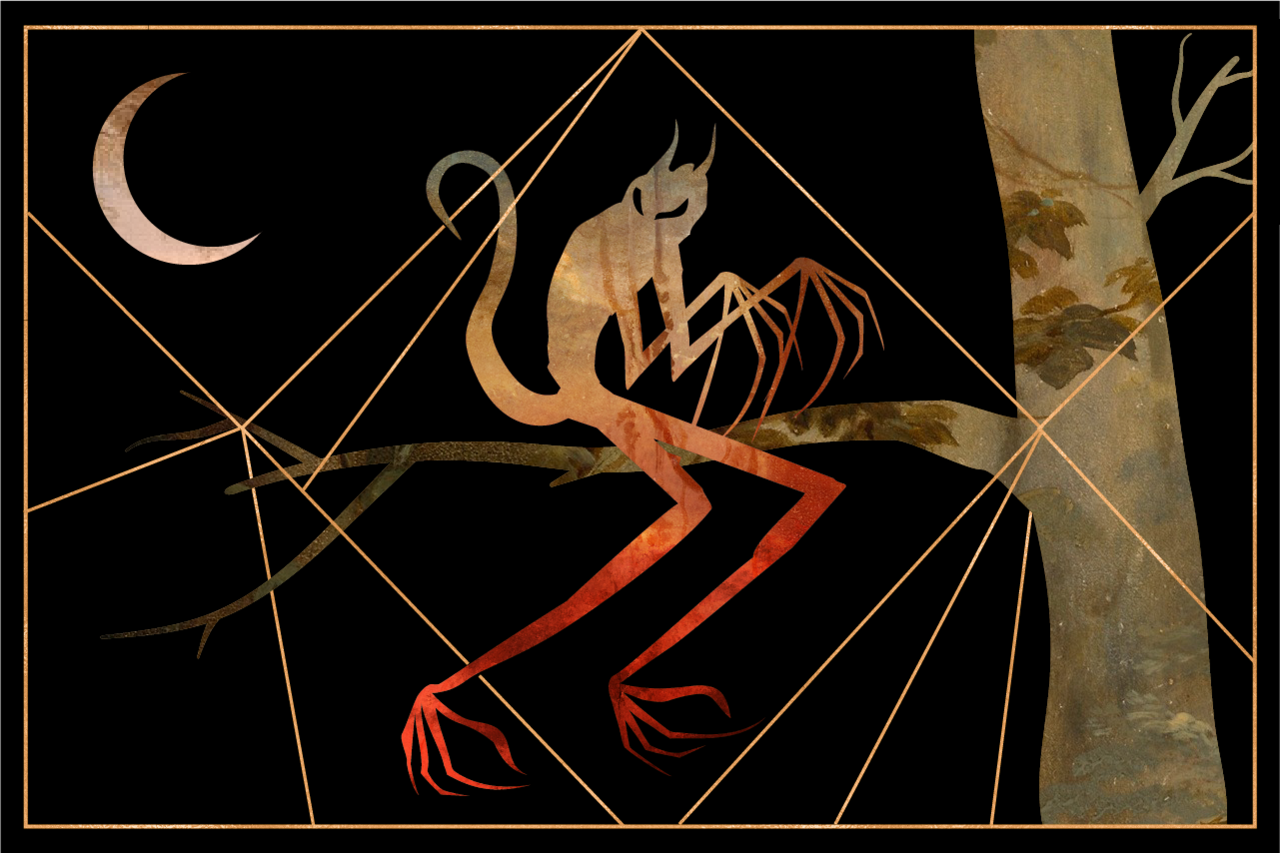 The legend of the sasabonsam became a way for Christian missionaries to exert control. W. Staehle / Unusual Co.

Among the Akan people in West Africa, there’s a story of a hunter. He had come from a long, storied lineage, and knew the rules of the land. He knew when he could hunt, when he could not, and where he could hunt, where he could not. But one day, for reasons unknown, he resolved to flout these traditional rules and pursue a kill on a day when humans were forbidden to enter the forest. As he tracked his prey deeper into the woods, he noticed that his sense of time and space began to warp. The forest, which had been so familiar to him, transformed into a labyrinth.

Disoriented and afraid, he tried to navigate his way out, but then the visions started. A bizarre monster drew him from tree to tree, only to vanish upon his approach. Confused and exhausted, the hunter fell into a deep sleep. When he awoke and made his way out of the forest and back to his village, he learned that he had been missing for days. Where had he been? What had he been doing? They asked. Even if he had answers, he could not offer them, as he had lost the ability to speak. Many believe that his life had only been spared as a warning, and the village understood what had happened. He had been a victim of the sasabonsam.

It is well known among the Akan, who live in Ghana, the Ivory Coast, and Togo that “You don’t go into the forest on Thursdays,” says Genevieve Nrenzah, a research fellow at the University of Ghana’s Institute of African Studies. The Akan believe that the land itself is a supernatural, feminine spirit called Asasseyaa, a goddess of fertility and an apostle of truth. Thursday is considered a sacred day, one that all sentient beings and the land should observe by resting, which means no tilling the land or hunting in the forest.

This restriction reinforces a centuries-old obligation to preserve the land and allow it to renew itself, and the sasabonsam is its enforcer. “Hunters visit the forest to hunt animals, and farmers go to the forest to plant crops, but on Thursdays, they should leave the land to rest and replenish itself,” Nrenzah explains. “It’s the one day of the week that humans are not supposed to visit the forest or the bush. The deities and spirits need to be able to come out to visit the physical environment [alone].” The spiritual implications mirror the ecological ones. The Akan adhere to the Thursday restriction as a form of traditional environmental preservation, one that merges nature, the divine, and respect for one’s ancestors.

The legend states that the sasabonsam lurks in the treetop canopies, waiting for victims to pass by underneath. There are different versions of how it might appear, but many know it as the “master of the most frightening appearance,” according to Nrenzah. It commonly has a bat-like head with long black hair, atop a lithe, lean, muscular humanoid body. Its mouth is full of sharp, iron teeth; its eyes wild, glowering, and red; its ears big and pointed to hear prey approaching from miles away. Its dexterous, hook-shaped feet allow it to suspend itself upside down. In some tellings, it also has a snake-like tail that it uses to distract and taunt its victims.

It is said that a sasabonsam immediately begins tracking a farmer or hunter who dares to venture into the forest on a Thursday. It’s been reported that the creature plays with its victims like a cat might play with a mouse, stalking prey as if by instinct, even when they’re not hungry. It might jump from tree to tree, or tap a victim’s shoulder with its tail. Once the sasabonsam has had its fill of taunting, it will stretch down to the forest floor to snatch up its prey, biting its neck, draining its blood, and gorging on its flesh and bone.

“These stories and legends [of the sasabonsam] are used to educate and socialize people,” Nrenzah says, something she has honored in her own life. “The same stories I heard as a kid are the same stories I tell my children.” They are cautionary tales carrying moral lessons about the necessity to respect the land.

Though terrifying, these beliefs help anchor Akan culture, and ensure its passing from generation to generation. And when colonial lines were drawn between Ghana, the Ivory Coast, and Togo, dividing the range of the Akan, it was traditional belief systems that tied them across arbitrary barriers.

This isn’t to say that the legend of the sasabonsam hasn’t evolved. A substantial shift in the narrative and meaning of it occurred in the 20th century, when Christianity brought about a new popularization and weaponization of the monster. “When the Christians came, determined to spread the gospel, they looked around and they couldn’t find the devil,” Nigerian playwright Wole Soyinka posited in a roundtable discussion on the negative effects of Christianity on African cosmology. “When they couldn’t find the equivalent of the devil, they took one of the deities. [Christianity] intruded for the sole purpose, very often, of preparing the way for the real stormtroopers of commerce, imperialism, colonialism, exploitation, disdain, [and] racial disdain.”

Recently, the creature played a prominent role in Marlon James’s acclaimed novel Black Leopard, Red Wolf, bringing African mythology into a fantasy epic and reappropriating the legend to a modern purpose. This sasabonsam is more monstrous than his ancestors: He is described as “the bloodsucker,” with red eyes and large, bat-like wings, and a penchant for killing alongside his brother, Asabonsam, “the flesh eater.”

It wasn’t the first time James wrote about the sasabonsam. In his 2009 novel The Book of Night Women, he describes the creature as follows:

Sasabonsam come straight from the Africa, not in the chains but by free will, and make him home wherever there be most misery. Sasabonsam live in the cotton tree and give any man him time if have a guinea… a shuman at your bed mean somebody setting evil on you, mayhaps death. Sasabonsam be the wickedest Obeah, worse than poison.

In this way, the Sasabonsam has proven versatile: Hundreds of years of oral tradition shaped the monster into various forms, from a deity necessary to deter exploitation of the land, to a placeholder for the devil, appropriated to instill fear, to a gruesome monster in a beloved fantasy book. Through all of this, the sasabonsam is there to enforce rules, unspoken and spoken, that must be followed.

These provincial specters are as gruesome as they are hungry.
mythology