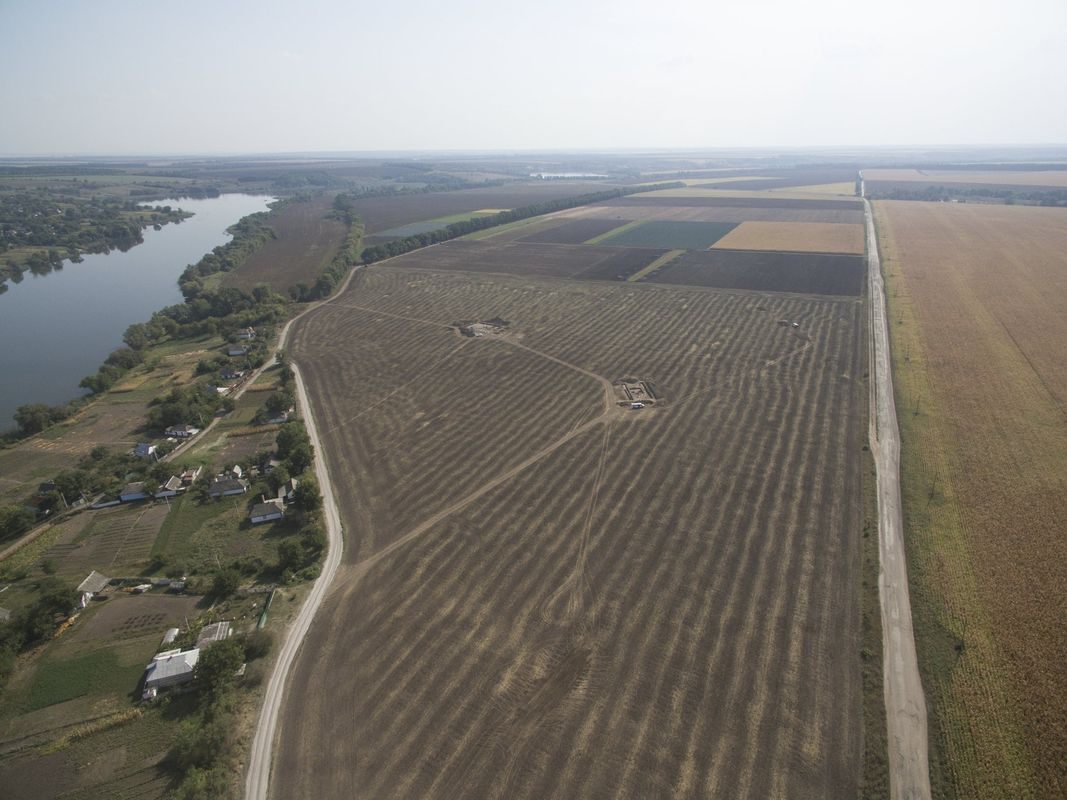 In Maidanetske, a massive Neolithic settlement is revealing a complex social structure. Collaborative Research Center 1266
In This Story
Destination Guide

Public squares have been so integral to communities around the world and throughout history that many venues are inseparable from the cultures that created them. Athens had its Agora. The Romans had their Forum. New York City has Times Square. And, as a new paper in the journal PLOS One has revealed, the ancient people of Maidanetske had their own version.

First identified through aerial photographs in the mid-20th century, the Tripolye mega-sites, including Maidanetske, are the remains of large Neolithic settlements in what is now Ukraine. Thousands of people lived on the sites until around 3000 B.C. The Cucuteni-Tripoyle culture that created them, which also extended into modern Moldova and Romania, used kilns for ceramic work, had animal-drawn sledges, and possibly invented the wheel. Though little is known about how the communities functioned socially, archaeologists are looking at the sites’ architectural layout to better understand them.

“The number of possible geometrical shapes for the settlements is not that high,” says Aleksandr Diachenko, an archaeologist with the National Academy of Sciences of Ukraine who specializes in Triploye culture, and was not affiliated with the study. “Settlement structure really matters in terms of social organization.”

Maidanetske was about the size of early Mesopotamian cities, and was built in concentric rings, about 100 miles south of Kyiv. A team of Ukranian and German archaeologists looked at the layout of the 3,000 houses and determined that 13 large structures—with areas of 2,000 to nearly 13,000 square feet—likely acted as venues for public events and social functions. These would have been large gatherings, perhaps political in nature.

“The unique spatial layout of the settlement plans suggest a unique social configuration,” says Robert Hofmann, an archaeologist at the Institute for Pre- and Protohistory at Kiel University in Germany, and lead author of the paper, via email. “The living together of 10,000 (±5,000) people was only possible through (democratic) sequential decision-making processes, made at different societal levels.” What he means is that the large community at Maidanetske relied on these civic centers in order to function; they were Neolithic negotiation rooms, for all manner of prehistoric problems.

Hofmann’s team compared the structures at Maidanetske with more than 100 others in various other ancient European settlements, and determined that they must have been critical parts of life in the settlement. While the dwellings were two-storied, the mega-structures were just one floor, and some lacked roofs, suggesting an open activity space. The unroofed ones tended to be located in central plazas, while smaller, roofed buildings may have served specific groups, farther from the city center. Researchers think most could hold more than 1,000 people at a time. Maidanetske was clearly an organized place, and persisted for 350 years.

But like all ancient cities that appear to us today as ruins, it was eventually abandoned. The archaeologists speculate that over time, the larger meeting spaces became more important than the smaller ones, which fell into disuse. Hofmann suggests that changes to the social organization—perhaps increasingly centralized in a way that discouraged or suppressed participation—was unsustainable.

“The case of Tripolye mega-sites seems to be an example,” Hofmann says, of “how humans should not govern. Dysfunctionality of social institutions, lethargy, and lack of democratic participation contribute to deterioration of the social fabric in a human society.”

It’ll be interesting to see what archaeologists of the distant future will make of Washington’s National Mall, Beijing’s Tiananmen Square, or London’s Trafalgar Square.

Native American farming was more sophisticated than your history textbook told you.
ancient

The Ancient Mesoamerican City That Spawned Copies of Itself

Found: The World's Oldest Footprints, Made by Ancient Bugs

They are tiny but mightily impactful.
architecture

Traces of prehistoric life are everywhere.
Video • Object of Intrigue

Researchers nudged the construction date of some these landmasses, known as crannogs, back to the Neolithic period.
Read more
Thanks for sharing!