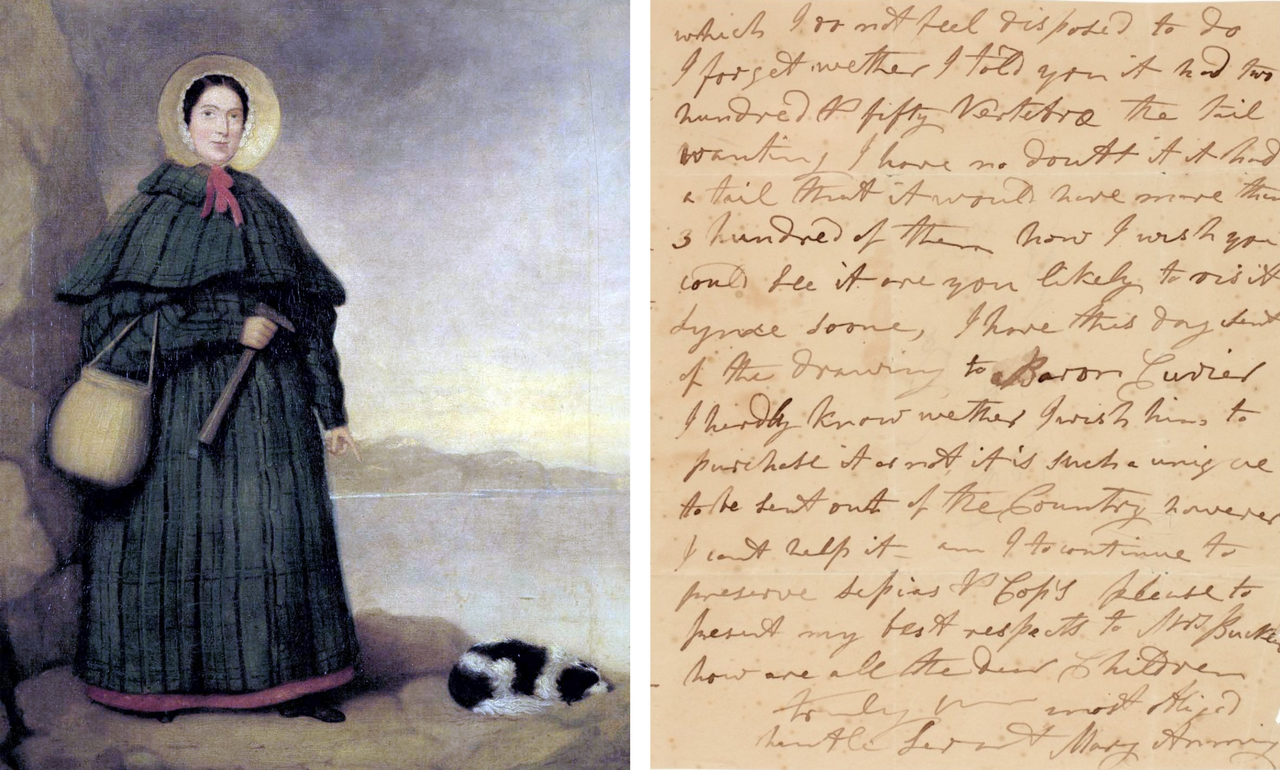 This marine reptile was discovered by one of the 19th century's greatest fossil hunters.
Destination Guide

Mary Anning had a knack for finding fascinating pieces of the distant past. In the 19th century, Anning regularly scoured the beaches of Lyme Regis, in the English county of Dorset. Her many expeditions turned up some fascinating and high-profile finds from millions of years ago, including fossils of plesiosaurs and ichthyosaurs, marine reptiles that prowled the waters of the Mesozoic era. Anning also collected some less-sexy specimens—particularly, coprolites. From the Greek for “dung stone,” coprolites are chunks of fossilized crap. They may not be as enthralling as the complete skeleton of a prehistoric predator, but the insights they can yield are nothing to sniff at—and Anning’s 1829 letter about them, sent to esteemed paleontologist William Buckland, recently went under the hammer at Sotheby’s, where it commanded about $131,700.

Anning seems to have sent some prime samples along with her musings: In a box, “there are few coprolites which I hope you will think good,” she wrote. They surely piqued Buckland’s interest. Coprolites can be full of scientific insight, says Carl Mehling, a senior museum specialist in paleontology at the American Museum of Natural History. “If bits of bone or teeth are in it, we can get a sense of which animals ate which animals at what time period,” he says. Sometimes, they also contain parasites that don’t appear elsewhere in the fossil record. And if the surrounding sediment, such as coarse sand, isn’t particularly conducive to preserving certain material—say, feathers and soft tissue—the environment inside ancient feces might be more welcoming. “Even if you’re not interested in the turd itself, it can act as a special matrix,” Mehling says.

But they can also be tricky to study, or even to find. “Most are missed because they look like rocks, and a lot of rocks get called coprolites because they look like turds,” Mehling says. “It’s incredibly easy to mess up the identification.” Strong candidates are studded with so-called inclusions—bits of bone, shells, or other things that traveled through an animal’s digestive tract—which lumpy, log-shaped rocks won’t have. (Anning wrote that one of her coprolites “had some remarkable bones in it.”)

Even if a researcher is pretty sure she’s looking at one, though, it’s hard to match the deuce to the creature that dropped it: “virtually impossible,” Mehling says, with a few exceptions. Tyrannosaurus rex’s foot-long feces is fairly easy to identify because “it’s full of bone, and huge, and from an area where they were the only carnivores at that time big enough to make it,” Mehling says. But size can be misleading, because while small animals tend to make only very small poops, big animals can make tiny poops, too. “They can look very similar across huge groups of animals,” Mehling says, though there are a few other clues to look for. A screw shape, for instance, points to an ancient fish with spiral-shaped guts.

Part of the reason that the letter fetched such a hefty sum could be that 1829, the year it was penned, marks an important event in the annals of coprolite history—in fact, the note appears to coincide with nearly the beginning of it. That’s when Buckland began plugging away on his first papers on coprolites, Scientific American has reported; he presented an overview of the coprolites at Lyme Regis to the Geological Society of London in February of that year. Anning’s shoreline observations were key. Scattered throughout the body cavities amid the bones of the creatures she found, she sometimes came across masses of scales and other stuff that led her to conclude, “What else would it be but a turd?” Mehling says. “She said, ‘I think this is shit,’ and that was the origin of the idea,” he adds. When she and Buckland corresponded about coprolites, Mehling adds, “This was a brand-new word they were using between each other.” And 191 years later, we’re still talking about it.

As the Arctic Warms, the Iñupiat Adapt

Scientists braved rain, mud, and a close encounter at a crocodile farm to learn what fossilized feces reveal about life 33 million years ago.
science

But they didn’t eat our ancestors—probably.
Want to see fewer ads? Become a Member.
From Around the Web
THE GASTRO OBSCURA BOOK
Taste the World!
An eye-opening journey through the history, culture, and places of the culinary world. Order Now