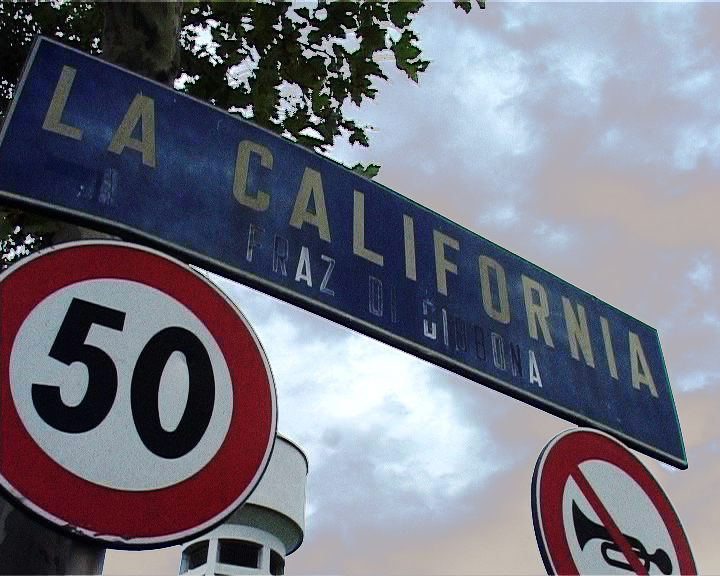 There are a lot of theories about why it's called La California. American Elections for Non-Americans
In This Story
Destination Guide

The SS1 Aurelia highway runs along Italy’s Tuscan coast, which makes it one of the most familiar holiday routes in the nation. Among the sites along the road is an oddity that never fails to catch the eye of drivers and passengers: a sign, at kilometer 273, on the edge of the city limits of Cecina. On it, an arrow points toward a small exit on the big highway: “La California.” “That sign is always brand new,” says local historian Marco Andrenacci. “It gets stolen at least once a year, never has the chance to wear out.”

Between Cecina and Bibbona, La California is a small village sitting on a plot of land that once belonged to the former commune and later passed to the latter. With a population of just over 1,000, as a settlement it dates back to the Paleolithic, and reached a peak during the Etruscan civilization in the first millennium BC. But it wasn’t until around 1860, when Tuscany joined the Kingdom of Italy—just a decade after California became America’s 31st state—that Italy’s own California was born. Eventually it would come to feel a kinship with its much larger namesake half a world away.

The genesis of the name is unclear and widely debated. Pretty much every “Gabbanese,” as the residents of La California are called, has their own version. The most famous one—actually turned into a movie by director Nello Correale in 1999—is that once Italians began immigrating to the United States in large numbers, swindlers coaxed poor Sicilians onto small boats with the promise of a voyage to California, only to drop them on the Tuscan shore (but keep their money). Lost and bamboozled, it is said, the Southern migrants named the town after their hoped-for destination. But Andrenacci has proven this story wrong, with evidence that the village called La California before that time.

Another legend involves the 1890 European tour of Buffalo Bill’s Wild West circus, and a challenge to local cowboys, called butteri. Andrenacci throws cold water on this one as well, and in his book California, Oltre il mito (California, Behind the Myth) offers another solution to the mystery: a man named Leonetto Cipriani.

Cipriani is a pivotal character in the history of La California. Born in Corsica in 1812, he grew up in Livorno and became active in the revolutionary uprising of the Risorgimento, or the movement to make Italy a single kingdom. His family owned some land in Cecina and, throughout his career as a military and political leader, Cipriani cherished those properties.

He stayed in Cecina until 1850, when he found a copy of the French newspaper Journal des débats featuring a report on the newly minted state of California that depicted it as a “paradise on Earth for its temperate climate, its astonishing vegetation, and its unlimited richness in minerals (gold had been discovered there less than a couple of years earlier),” Andrenacci writes. This was enough to persuade Cipriani to leave a still-not-unified Italy. He went to Turin to bid farewell to the Prime Minister of the Kingdom of Sardinia, Massimo d’Azeglio, who decided to entrust him with the role of consul in San Francisco.

Cipriani eventually settled in Belmont, in the Bay Area, and made his fortune there, where a primary school still bears his name. He traveled the country, and was among the first European citizens to visit and chronicle the Mormon settlement that would eventually become Salt Lake City. His American journey ended in 1855, when he was recalled to Italy.

It was around this time that the small plot of land hosting a restaurant owned by the Gabbani family took the name “La California” (which partially explains why they’re called Gabbanese and not Californian). Andrenacci believes that Cipriani’s own tavern, a few miles north of Gabbani’s, had been crucial to the name. People would travel from one roadhouse to the next, recounting the stories of America’s California they heard at Cipriani’s at the next resting point along the way. Eventually the place simply borrowed the name.

Over the years, the link between La California and the United States remained strong—so strong that in 2004 the Tuscan village hosted the first unauthorized polling station for an American presidential election outside the United States, so it claims. It was the brainchild of writer-directors Michele Cogo and Francesco Merini. Their idea was simple: “As the United States of America is the world’s greatest power, affecting and determining the fate of the planet, why shouldn’t we have the chance to vote for their/our President too?”

“Now the world’s power structure is a bit different, especially since Trump’s election, but back in 2004 everybody agreed with our theory,” Merini states. “We wanted it to happen in a place reminding of the States, and La California was perfect.” Mayor Fiorella Marini and Councilor for Culture Stefano Marmugi welcomed the idea. So on October 31, 2004, the project Are We All Americans? kicked off. On the ballot, next to the official presidential candidates, everyone could write the name of a local candidate for the vice presidency. Two famed residents of Bibbona at the time took part. Photographer Oliviero Toscani, notorious for his Benetton advertising campaigns, took care of the graphic design, while comedian-turned-populist-politician Beppe Grillo performed his stand-up routine on Election Day. Five voting booths—the same used for the real Italian elections, along with the ballot boxes—were placed behind a huge plasterboard White House. Conferences, debates, and concerts took place during the day. The voters of La California (like America’s California) chose John Kerry, followed by Ralph Nader. Incumbent president George W. Bush earned a scant 5.6 percent of the vote. Local councilor Marmugi won the “vice presidency.”

The ballots were brought brought before the American consul general in Florence, William W. McIlhenny, who stated that the voting represented “the future,” though rumors say that Bush’s third place finish caused a bit of diplomatic embarrassment. Merini and his crew documented the day and its aftermath in a movie titled Il Presidente del mondo (The President of the World).

La California, held another, smaller election in 2008, with Barack Obama seeing a landslide victory. After that the project has faded, but not La California’s attachment to its American namesake and American politics. As for 2020, “The right candidate for the American presidency at this moment in history would have been Bernie Sanders,” says Marmugi. “Too bad he didn’t make it in the primaries. So I would choose the lesser evil, Joe Biden. Trump’s reelection would be a planetary disaster.”

Walter Moses Burton was born into slavery, but eventually served four terms in the Texas state senate during the progressive but brief Reconstruction period. Visiting his gravesite in Richmond, Texas, offers an important glimpse into Texas’—and the South’s—political history.
Sponsored by DEVELOP Richmond TX
politics

Letters from the Loneliest Post Office in the World

A 19th-century excavation, a beleaguered police chief, and the ongoing tension over a city’s heritage.
Video