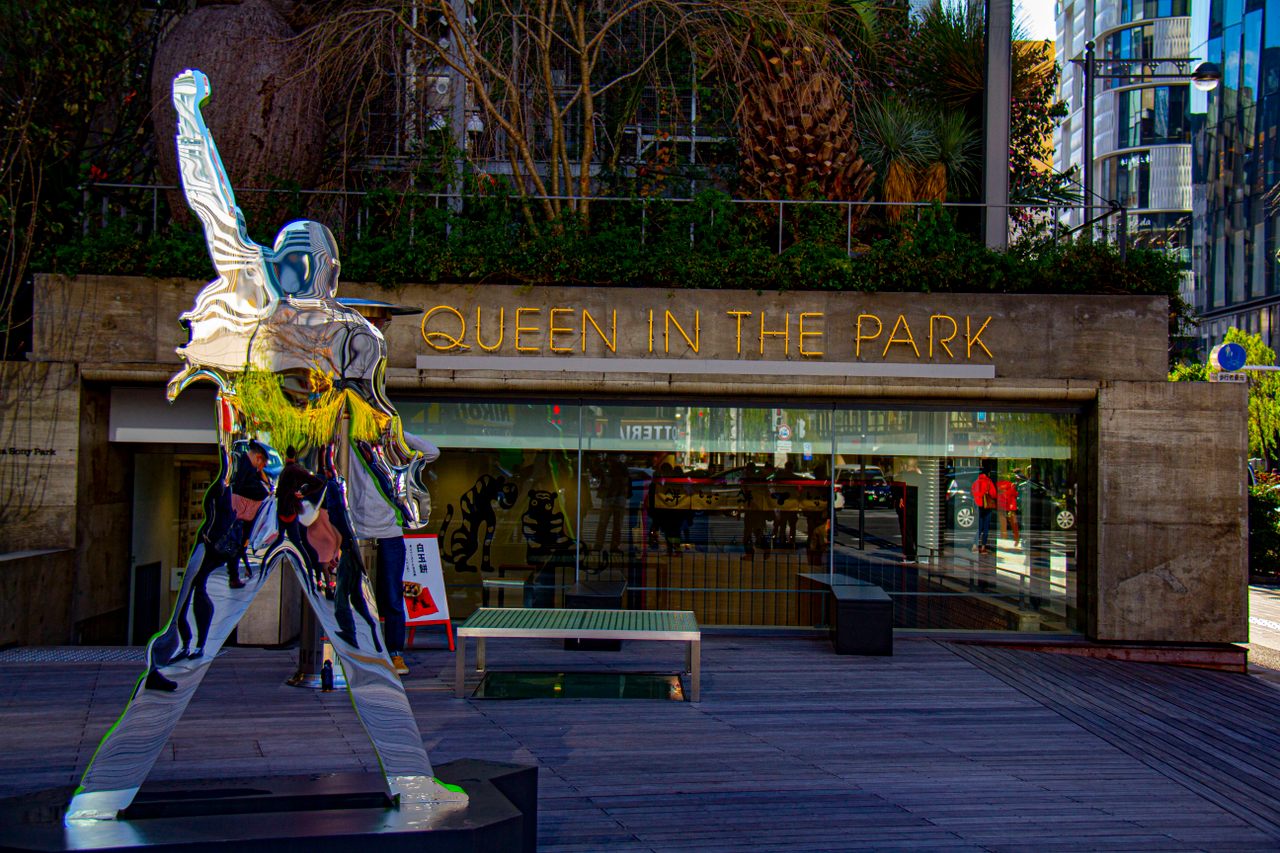 The entrance to the multimedia Queen in the Park art installation at Ginza Sony Park, in February 2020. Allan Richarz
In This Story
Destination Guide

There are few foreign bands that whip Japan’s famously stoic audiences into a frenzy the way that English rockers Queen traditionally have. Every April 17 is Queen Day there, with a slate of events to celebrate the day that the band first arrived in the country, back in 1975. This year the global pandemic has changed the celebration of Queen Day, but hasn’t blunted the intensity of Japanese fans’ ardor.

Throughout the spring, across the country there have been a series of one-off exhibitions and attractions to honor the 45th anniversary of the band’s Japanese debut. In-person events for “Queen no Hi,” as the unofficial holiday is known, were understandably canceled, but fans still found a way to celebrate.

On April 17, 1975, Japan Airlines flight 061 from Honolulu touched down at Tokyo’s Haneda International Airport. In the airport, 3,000 fans had packed the arrivals lounge to catch a glimpse of rising superstars, Queen. “April 17 was really the day when the close relationship between Queen and Japan began,” writes music journalist and Queen Day organizer Takayuki Ishizumi in an email.

The semi-official Japan Anniversary Association now recognizes Queen Day, and its festivities have grown over the years, with the largest fittingly held at Haneda Airport’s Sky Hall event space. The first major event, in 2015, sold out, and featured panel discussions with Japanese personnel from the band’s decade of tours in the country, as well as music journalists and Queen tribute acts.

Ishizumi, who has also authored several books on the band, worked with its Japanese label and publisher to organize the celebration at Haneda. “There were events [in Japan] where Queen fans could gather on [Freddie Mercury’s] birthday (September 5) and death day (November 24), but both are in summer and autumn,” Ishizumi explains. The need for a more formal springtime event is just another signal of the depth of the band’s impact there.

“Queen Day is an important occasion for Japanese fans to reaffirm the bond between Queen and Japan,” writes fan Yoko Doi of Tokyo in an email. In 2019, Doi—along with 300 others—marked Queen Day with an outdoor screening of the 2018 film Bohemian Rhapsody, featuring band cosplay and plenty of Moet et Chandon, naturally (see the lyrics to “Killer Queen,” if you’re not an initiate).

This year was marked with simultaneous online viewing parties of Queen concerts and Bohemian Rhapsody, kicked off with a shared toast. Though disappointed, Doi speaks highly of the online events, which were coordinated through a series of hashtags and message boards. “It was good to be able to celebrate with everyone [and] connect with [other fans], even online,” she says.

Even as Queen was still making inroads in its home country of England, especially among critics, the four-piece had developed a devoted following in Japan by the time the band’s first world tour kicked off in 1974. Music journalist Togo Kaoruko, who has long chronicled Queen’s career in Japan, attributes the band’s early success in the country largely to two groups: young female fans enraptured by Queen’s early androgynous, glam-rock aesthetic, and foreign music aficionados—“guitar nerds,” he calls them—impressed by the band’s technical chops.

Ishizumi agrees: “In 1975, 90 percent of the band’s Japanese fan base was teenage girls,” drawn to the members’ good looks and uncommon—for rock musicians—intellect. (Guitarist Brian May was studying astrophysics before the band hit it big, and returned to it to earn his PhD in 2008.) “Musicality was also a big factor,” says Ishizumi. He also notes that the band’s popularity has surged there—“Queen booms”— at various times over the decades.

The effect of the band on Japanese audiences was unmistakable. Performing to a sold-out crowd at the famed Budokan arena on April 19, 1975, frontman Freddie Mercury was obliged, mid-performance, to ask the raucous fans for calm. It was and remains an unusual occurrence in a country where audiences are known to sit politely during rock concerts. The love affair was not one-sided. The band and Mercury, in particular, were similarly captivated.

“All of the band fell in love with Japan,” says Greg Brooks, Queen’s official archivist, in an exclusive interview for this article. “I’ve heard all four band members waxing lyrical about Japan, about its people and culture.” Brooks, who was in Tokyo in January 2020 to open a Queen exhibition and for the release of the Japanese translation of his book on Mercury, notes that all four members even vacationed there when not on tour. Former Mercury assistant Peter Freestone told Lesley-Ann Jones, for her biography of the late singer, that “Things Japanese were an all-consuming passion for [Mercury], whereas everywhere else he stayed in the world was merely a bed for the night.”

Mercury filled his London home with artifacts purchased during his frequent, expensive visits to the country. “Freddie in particular was in awe of it,” says Brooks. So famous was his fondness for Japanese ceramics that one museum in far-flung Tochigi Prefecture, visited by Mercury with partner Jim Hutton in 1986, remains something of a pilgrimage for fans.

Today the band now tours as Queen + Adam Lambert (the band and younger singer have collaborated since 2011), and wrapped up a four-date, sold-out tour of Japan in January, featuring an emotional acoustic rendition of the band’s Japanese-language hit “Teo Torriatte.” “They love these guys,” Brooks says. “There is a love for this band here like you’d expect if it was family visiting.”

The 45th anniversary this year marks a special outpouring of this love, including a dedicated exhibition that was scheduled to travel to three cities, and features the largest collection of authentic tour costumes ever put on display, as well as props, original handwritten lyrics to a dozen songs, photographs, and other mementos from the band’s decade of tours in Japan.

Among the more eclectic items on display is a sword gifted by Mercury to the band’s long-time Japanese bodyguard, Hisao Itami, who also made appearances at the exhibit, to the delight of fans who lined up three-deep to enter the exhibit during its initial run.

And among the glittering buildings in Tokyo’s posh Ginza district, in Sony Ginza Park, a multistory indoor/outdoor park/art gallery, Sony Japan offered Queen in the Park, a free interactive art installation that ran through March.

In front, fans posed with a silver and neon statute of Mercury in an iconic pose. Visitors then descended a musical staircase equipped with laser triggers to play the famous stomp-stomp-clap beat from “We Will Rock You.” Time the steps correctly, and a light-and-audio show would activate, playing the song’s opening vocals.

Forty-five years have passed since Queen first set foot in Japan, but time and global uncertainty has not impacted the mutual affinity between band and country.

In this town located 15 minutes outside of Fredericksburg, musical performances are hosted 363 days a year. Grab a beer and kick back under 300-year-old oak trees that have heard some of the best country musicians of all time.
Sponsored by Fredericksburg Convention and Visitor Bureau
music

It's where legends like Tina Turner and Ray Charles launched their careers.
music

Join us for a daily celebration of the world’s most wondrous, unexpected, even strange places.
Sponsored by Discover Puerto Rico
Video