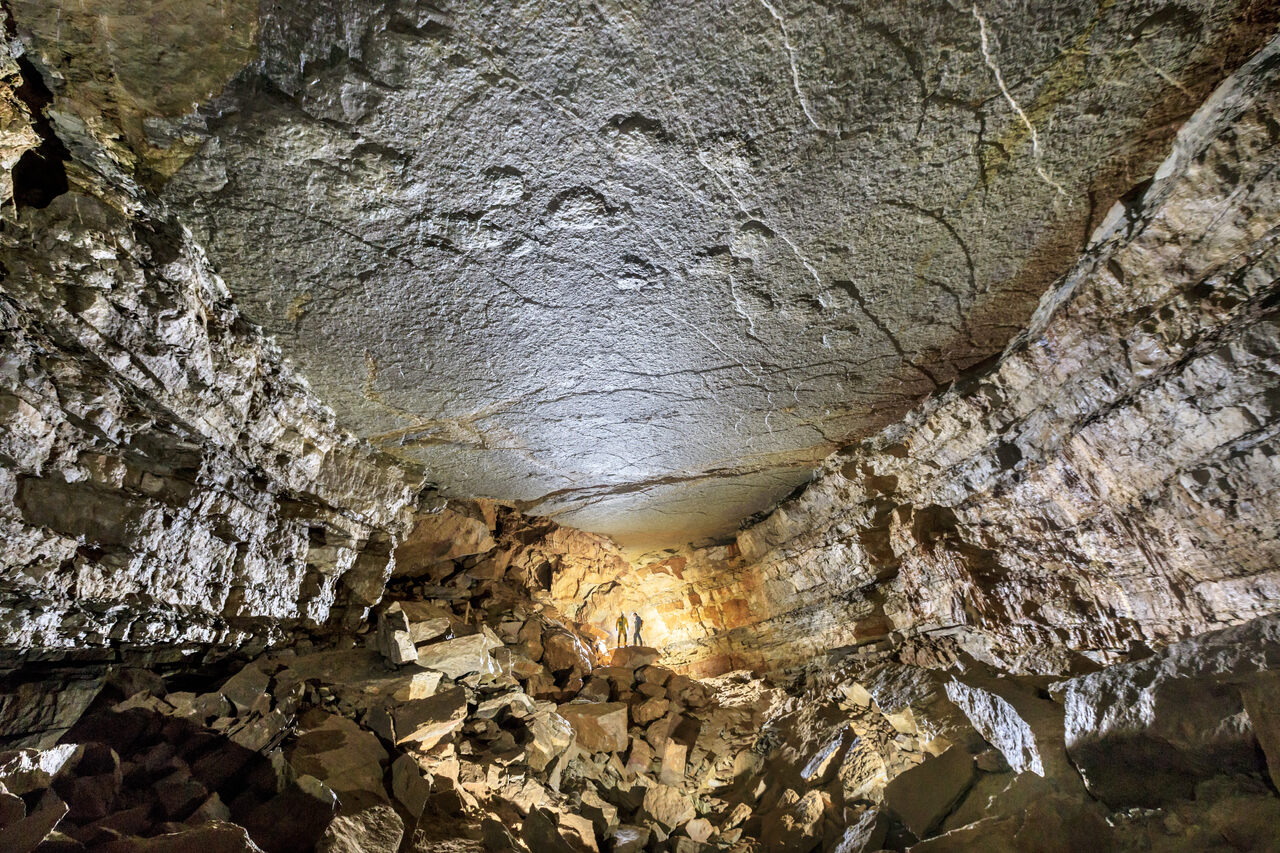 The massive gallery 1,600 feet below France has some pretty big feet on display. Rémi Flament
In This Story
Destination Guide

Under normal circumstances, hundreds of people pass through Castelbouc Cave in the south of France each year, many seeking to become more experienced cavers by training in the labyrinthine passageways under the surface. Little do they know that they’ve long been exploring—literally—among the footsteps of giants.

A few years ago, a crew of seven—speleologists and paleontologists, led by guide Louis Baret—crawled through a narrow passageway 100 stories below ground and into a vast karst corridor. There, high above their heads, were seven massive splotches.

“Just above me I [saw] huge circular structures,” says Jean-David Moreau, a paleontologist at the University of Bourgogne and lead author of a recent paper detailing the find, published in the Journal of Vertebrate Paleontology. “I screamed, ‘Louis, don’t move anymore!’ We were in front of the very first traces of giant herbivorous dinosaurs discovered in a deep natural cavity.”

More than 160 million years ago, stone that now forms the roof of the cave was a part of a route taken by titanosauriforms, some of the largest dinosaurs that lived. One day, a group of the animals trekked across a clay embankment abutting an inland sea, the bed of which now underlies much of France. The dinosaurs’ depressions on the ground remained, and over time, the area was buried under millions of years of sediment. As the land rose and sea level dropped, erosion eventually carved the limestone cave system, including a passage that ran directly under the original dinosaur impressions.

“By looking more closely at these structures, I noticed that they formed alignments and drew repeated patterns,” says Moreau, whose trip was organized by the Association Paléontologique des Hauts Plateaux du Languedoc, a local organization. “[It was] incredible … it didn’t take a long time to realize that we had just made a major discovery.”

The tracks Moreau’s team found weren’t flipped upside-down by time and geology, nor had they been made by mysterious spider-dinos.

“The tracks we see on the roof are not footprints,” Moreau says. “They are counterprints.” That is, they are convex structures rather than depressions, like a plaster cast of a footprint, except in the stone and only visible from beneath.

Portions of the cave flood during wetter periods, so the dino-track gallery is only accessible during dry spells—and only by cavers experienced and brave enough to get all the way down there without succumbing to claustrophobia.

Is your imagination as wondrous as reality?
paleontologydinosaursfossilsundergroundcavesancient

Their names are Molly and Darla.
dinosaurs

The reptilian critters may not have survived, but they made sure to sign off feet first.
dinosaurs

Why Does the U.S. Army Own So Many Fossils?

Prehistoric Sand Is Full of Secrets

Petrified wave ripples can tell us about the weather that dinosaurs saw.
Video • PinDrop

Found: Possible Traces of DNA, in a Fossilized Dino Skull

This ancient hadrosaur has some microscopic secrets.
Read more
Thanks for sharing!