The Incarcerated Inuit Artists Who Carve to Support Their Families - Atlas Obscura
Want to see fewer ads? Become a Member. 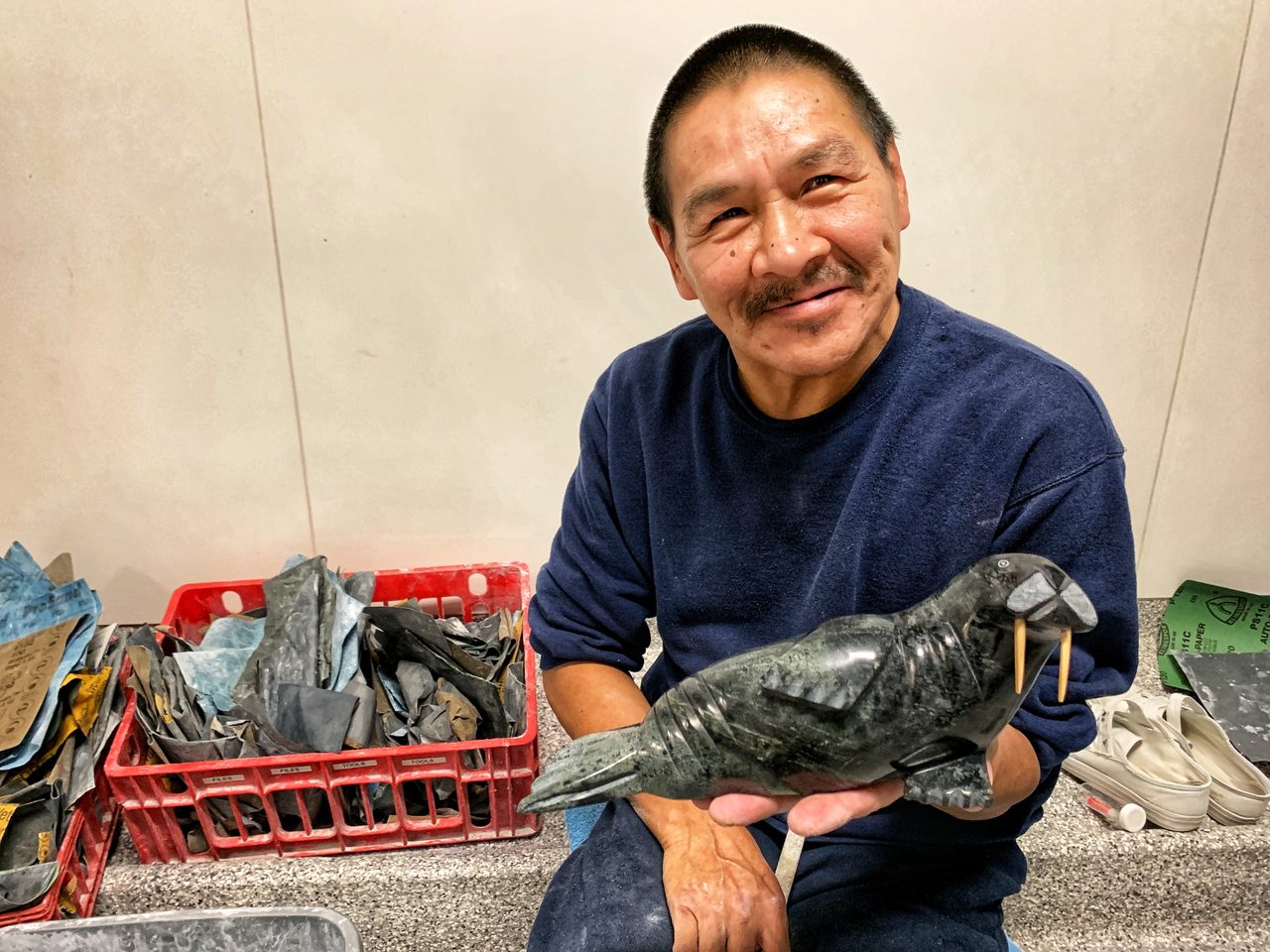 Eegeesiak Shoo holds up his carving of a walrus in Makigiarvik jail. All photos by Jennifer Bain
In This Story
Destination Guide

Of all the places to buy Inuit art in the Canadian Arctic, one of the most unusual is the minimum-security jail in Iqaluit, capital of the territory of Nunavut. The jail isn’t on the maps handed out to tourists. It sits between downtown and the airport, and taxi drivers know it simply as “new jail.” On Federal Road, below a small Department of Justice Crest, a sign shows photos of a drum-dancer sculpture and traditional fur boots, with the words “Makigiarvik Clothing and Carving Sales” in English and Inuktitut.

In the Inuktitut language, “Makigiarvik” means “to go through hard times and start over.” This men’s jail, Makigiavrik Correctional Centre, was named in consultation with Inuit elders. Every Friday, from 1:30 to 4:30 p.m., it hosts a sale of everything from soapstone carvings to crocheted hats to animal bone jewelry. “Typically, we sell out every week,” says Jean-Pierre Deroy, Nunavut’s Director of Corrections. “Word of mouth in this town goes very quickly.” Sometimes, there are crafts and carvings from the nearby women’s jail.

Makigiarvik is a territorial jail for men who are awaiting trial for a range of alleged crimes, or who are serving sentences of less than two years. (Longer sentences are typically served in federal prisons.) Locals tend to know when a renowned carver has been arrested—and they know that carvings here are priced to sell quickly, so the artists can help support their families.

Tall fences surround the jail. Once inside, visitors will find a reception area that features a large glass cabinet filled with carvings. Most visitors don’t get to meet the carvers, who work on weekdays for three hours in the morning and three hours in the afternoon. But on a dark December day, I arrive at 3 p.m. with special permission to interview some. I’m warned not to photograph any doors, for security reasons. In a fenced-in, outdoor area, two carvers are working with grinders and files, wearing winter overalls, steel-toed boots, safety goggles, and ear protectors.

Elijah Jonah, a marine engineer from Iqaluit, is making a black soapstone raven and a green owl that he expects to price at around $230 in U.S. dollars. Usually, he sells his carvings at the local museum or restaurants—not the local galleries, “because they’re the ones making the profits.” He says the carving program gives him “something to do outdoors, something I like to do, and get paid for it.” He has experimented with roses, hunters, drum dancers, and even a Guy Fawkes mask.

Toonoo Sharkey, a full-time artist from Cape Dorset, works on an abstract bird. He’s been carving since he was 10, so his work is more elaborate, priced from $610 to $1,500. He sells his creations through the West Baffin Eskimo Co-operative, or a shop owner who wholesales to southern Canada. He sends money from jail sales to his family for food and clothes.

Here in Nunavut, temperatures stay well below freezing for most of the year, and the average yearly snowfall would have to be measured in feet, not inches. Around 38,000 people live in 25 remote, fly-in communities that aren’t connected by roads. About 85 percent are Inuit whose ancestors have lived for centuries in what is now Northern Canada, Alaska, and Greenland, and whose way of life traditionally revolved around the land, family, hunting, and fishing.

Indigenous people—Inuit, First Nations and Métis—have long been overrepresented in the Canadian criminal justice system. A recent federal report found that around 30 percent of the people incarcerated in provincial, territorial, and federal facilities are Indigenous, even though they make up just four percent of the adult population. They tend to be jailed younger, denied bail more often, and granted parole less often. These are some of the devastating impacts of colonialism, residential schools, intergenerational trauma, racism, and socioeconomic inequity.

To case workers at the jail, the carving program is about therapy and helping families. They buy soapstone, sell it to the men at cost, and the carvers keep 80 percent from each sale. They can use it at the canteen, for stuff like snacks and toiletries, or send it home. The other 20 percent goes to the system, which says it spends the money on communal carving supplies, coffee machines, treadmills, and PlayStations.

Ryan Farrell, one of the case workers, says he sees “a lot of anticipation” during Friday sales at the jail. Musicians, actors, the prime minister’s security team, and the Royal Canadian Mounted Police have all been customers. I first visited in 2017, and bought two pieces. Though it’s not Friday when I visit for the second time, I’m given permission to buy Pugh’s $65 Spirit Loon and two polar bear sculptures by Eegeesiak Shoo. (Sharkey’s mesmerizing sculptures are out of my price range, and Jonah’s rare raven isn’t finished.)

Inuit artists have long created stone carvings, fur clothing, and ivory tools, and historically traded them with settlers for things like guns, ammunition, sugar, and tea. Art sales really started in 1949 at an exhibit in Montreal, according to Darlene Coward Wight, curator of Inuit art at the Winnipeg Art Gallery since 1986. The gallery’s historic Inuit Art Centre is slated to open later this year in Winnipeg, Manitoba, to showcase the world’s largest collection of Inuit art, culture, and history.

Wight hasn’t been to the Friday jail sales, and rarely stops in Iqaluit when she travels north to meet Inuit artists and do research in smaller communities. (Those communities don’t typically have museums, jail sales, or informal restaurant sales; some don’t even have restaurants.) But she likes the idea. “The practice by the jail in Iqaluit of allowing inmates to create carvings to support their families is a good one,” says Wight. “That income is welcome as the largely male population is not able to hunt or otherwise provide for their families while incarcerated. It allows established carvers to maintain or improve their level of skill.”

Wight adds that most Canadians and visiting collectors buy Inuit art from galleries in the south, and never visit Nunavut or the artists who live there. Carvings Nunavut, a local Inuit-owned company, will send carvings around the world.

Nunavut is only a three-hour flight from Ottawa, but the most affordable flights cost at least as much as a transatlantic flight, and few tourists make the journey. Hotels and meals are expensive. Outside of Iqaluit, communities such as Pangnirtung, known for its crocheted hats and tapestries made at the Uqqurmiut Centre for Arts & Crafts, have only one hotel. Some communities do get occasional batches of visitors, though: Cape Dorset, renowned for its limited-edition prints, attracts cruise ships that allow artists to make cash sales on the street or in a local community hall.

There are, of course, other ways to buy art in Iqaluit—namely, going to a restaurant or bar and waiting for artists to come by with carvings, prints, sealskin bracelets, and tiny sealskin owls on strings, which double as Christmas tree ornaments. It’s a northern thing—elsewhere in Canada, everything is sold in stores. The Nunavut Arts and Crafts Association tags all Inuit art with the artist’s name and home community, along with the artwork title, material, price, and date it was created.

In a community where food prices are many times the prices in large Canadian cities, haggling is frowned upon, whether in public places or at the jail. “Many artists live by art only,” says Eva Aariak, the former premier of Nunavut and owner of a boutique called Malikkaat, which specializes in sealskin clothing, carvings, and jewelry. “Don’t worry about getting ripped off,” an old- timer tells me at the Royal Canadian Legion. “If you like it, buy it.”

The gift shop of a local nonprofit, Nunatta Sunakkutaangit Museum, is said to have great deals. Jessica Kotierk, a manager and curator, add a 40 percent mark-up on the art she purchases. But she pays up front in cash, and believes artists undervalue their work, so she sometimes offers more.

On a dark and blustery December afternoon, when Iqaluit only gets a few hours of daylight each day, Lucassie Kilabuk wanders in with seal-claw earrings and a necklace pendant. “Wow—those are so cool,” Kotierk says. “How much?” He asks for $30 each, and Kotierk quickly agrees. Then she sells one to me for $42.

The museum organizes its gift shop by artist, instead of theme, to show the scope of each person’s work. On a shelf full of polar bear, walrus, and inuksuit carvings, one of the names jumps out at me: Eegeesiak Shoo, whom I met in Makigiarvik jail while he was finishing up a walrus.

Shoo appreciates the ability to carve in jail, because it allows him to send several hundred dollars to his family each week and make purchases in the canteen. He lives in Iqaluit and prefers to sell to the museum, “because they give me the price I want.” On the outside, he also makes the rounds of the bars and restaurants. Sometimes, he says, people just drive up to his home in the nearby community of Apex, where he carves outside when he’s not doing his day job as a maintenance worker. “I’m a carver,” he says. “When I’m not working, I’m carving.”

A Native American filmmaker and Genius Grant recipient on what he's searching for on the road.
art

What Should Happen to this California Folk-Art Landmark?

The artist's descendants see a family legacy. The college where the statues are displayed sees harmful stereotypes.
art

A series of gift guides for the curiosity-seekers in your life.
Video • Wonder From Home