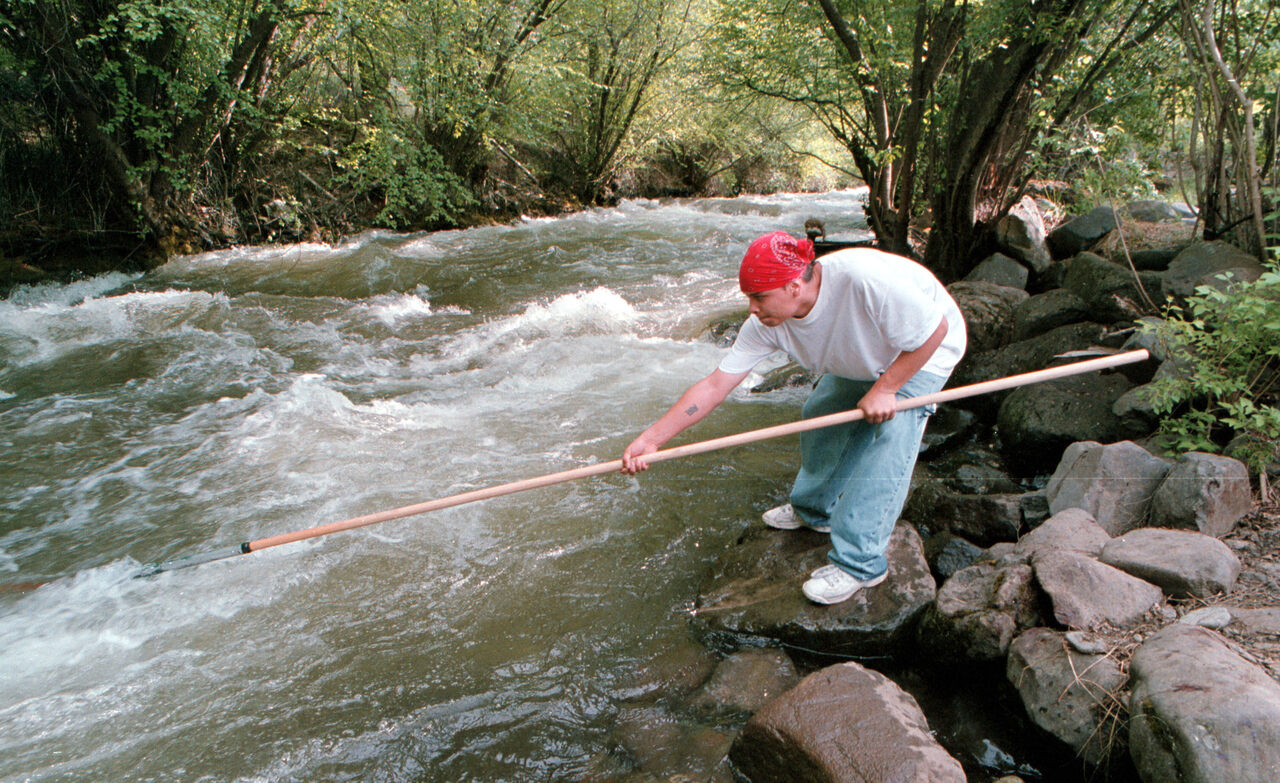 A member of the Nez Perce, Brian J. Pinkham, dipnets for Chinook salmon in Idaho in 2001. For the past several years, the tribe's climate change coordinator, Stefanie Krantz, has been conducting a vulnerability assessment and working on a climate adaptation plan. Bill Schaefer / Getty Images

This piece was originally published in Grist and appears here as part of our Climate Desk collaboration.

Temperatures in Idaho’s Columbia, Snake, and Salmon rivers were so warm in 2015 that they cooked millions of salmon and steelhead to death. As climate change leads to consistently warmer temperatures and lower river flows, researchers expect that fish kills like this will become much more common. Tribal members living on the Nez Perce Reservation are preparing for this new normal.

“The biggest and most poignant impact for Nez Perce tribal members has been the loss of fishing and fish,” says Stefanie Krantz, the climate change coordinator for the tribe. “For tribal peoples, they are absolutely essential for survival.”

After the 2015 fish kills, the tribe decided to hire Krantz to work full-time to assess the many ways that a warming planet threatens their way of life. The tribe has about 3,500 enrolled members, and its reservation spans 750,000 acres. For the last three years, Krantz has been conducting a vulnerability assessment and working on a new climate adaptation plan. The tribal government is expected to formally adopt Krantz’s plan after it has been finalized.

As other North American tribes have begun to experience the effects of climate change over the past decade, they too have started to adopt climate resilience and adaptation plans. According to a database maintained by the University of Oregon, at least 50 tribes across the U.S. have assessed climate risks and developed plans to tackle them. With more than 570 federally recognized tribes controlling 50 million combined acres, these adaptation plans could prove a crucial element in building resilient communities that can thrive despite weather-related catastrophes and changes to the natural environment.

“Tribes, because they are a separate sovereign, have a unique capacity to give us a lot of guidance,” says Elizabeth Kronk Warner, dean of the S.J. Quinney College of Law at the University of Utah. Federally-recognized tribes are sovereign governments and therefore can set climate policies independently of federal or state governments. The laws passed and programs adopted by tribes have the potential to significantly improve their resilience in the face of climate risks.

Warner has been researching the effects of climate change on indigenous peoples for about a decade and has noticed a “big, big increase” in the number of climate adaptation plans developed over the past five years in particular. “Increasingly, we’re seeing the impacts of climate change in Indian country,” she says. “As more tribes get into the field and are able to look at what other tribes have done, it increases the likelihood of proliferation.”

The process often begins with a community assessment to estimate the natural and cultural resources at risk from climate hazards. Following the assessment, consultants or in-house tribal staff can develop a specific plan to protect these resources. Tribes have conducted studies to understand how climate hazards—such as shoreline erosion from sea level rise and more frequent wildfires—might affect them, physically moved to higher ground to avoid being inundated by floods, and begun testing shellfish to ensure they are not poisonous due to phytoplankton growth caused by warmer temperatures.

The assessments vary widely from tribe to tribe, depending largely on geography and local environmental factors. Tribes in Western states, for instance, are particularly vulnerable to the impact of rising temperatures and its effect on water availability. Coastal reservations, such as the Swinomish on Washington state’s Fidalgo Island, are more concerned with adapting to rising seas.

Krantz, the climate change coordinator for the Nez Perce tribe, says that tribal members in particular are vulnerable to climate change because of their close ties to the land. Nez Perce tribal members, for example, pick berries, roots, and medicinal plants. As a result, they have a uniquely deep knowledge of the timing of ecological processes, such as the flowering of plants and migratory patterns of birds, she says.

“But those things are all changing,” says Krantz, and seasonal shifts are causing plants to move north and upslope. “Tribes have local, place-based cultures and their cultural survival depends on the land and the plants and animals.”

Indigenous ecological knowledge is a key component of many adaptation plans, and conversations with tribal elders and other community members often inform the assessments. After Yurok elders advised their tribe to “follow the water” in the wake of a massive fish kill on California’s Klamath River in 2002, the Yurok Tribe focused its attention and resources on aquatic habitats, drinking water, and the different species of fish that they rely on for sustenance.

The tribe has since developed a fish monitoring program that can detect diseases early. Since some diseases are worsened by higher temperatures and low water flows, the tribe relays information about the disease to the Bureau of Reclamation, a federal agency that manages dams on the Klamath River. The agency, which makes decisions about the amount of water released from behind the dam, may ultimately help decrease the spread of fish diseases. The tribe also lights controlled fires to reduce water use by thirsty plants on river banks and has been fighting to remove four dams from the Klamath by 2020.

The University of Utah’s Warner, who is a citizen of the Sault Ste. Marie Tribe of Chippewa Indians, also pointed out that tribal adaptation plans differ from state and local governments’ plans because they often examine the effect of climate risks on the community as a whole. “Usually [state plans] focus on the impact to the individual,” she says.

For instance, the Jamestown S’klallam tribe’s 2013 climate adaptation plan discusses the loss of salmon as both a nutrient-rich and culturally important species, unlike state plans which tend to focus on their economic benefits. Salmon not only provides a cultural connection with other tribes in the Pacific Northwest—it also provides a source of good fatty acids and protein that can counter diabetes and heart disease. In order to combat the spread of invasive species that threaten salmon habitat in the Dungeness River, the tribe has been mapping the presence of weeds and tracking the effectiveness of herbicides.

Tribes are innovators in this area, and local and federal governments can learn from their community-based approaches and use of traditional ecological knowledge, Warner says. Including community members early in the planning and implementation process, for instance, can increase buy-in and reduce costs through volunteer networks.

“Typically, we have a tendency to think of tribes as learning from the federal government, but this is definitely a situation where other sovereigns can learn from tribes,” she says.

The Uncertain Future of a Border-Straddling Liquor

“If you can’t gather shellfish then you’re going to starve.”
roads

Climate change is fraying these seasonal lifelines, causing hardships for the remote towns that rely on them.
mines

An analysis of the 10-foot-long appendages shows that as the Arctic warms, narwhal diets are changing, and their bodies are accumulating more mercury.
Video • PinDrop

6:50
Want to see fewer ads? Become a Member.
From Around the Web
Related

A slow, careful burn insulated Kule Loklo against a fearsome wildfire.
Read more
Thanks for sharing!