Why Italian Apple Farmers Are Coating Their Orchards in Ice - Gastro Obscura
Want to see fewer ads? Become a Member. 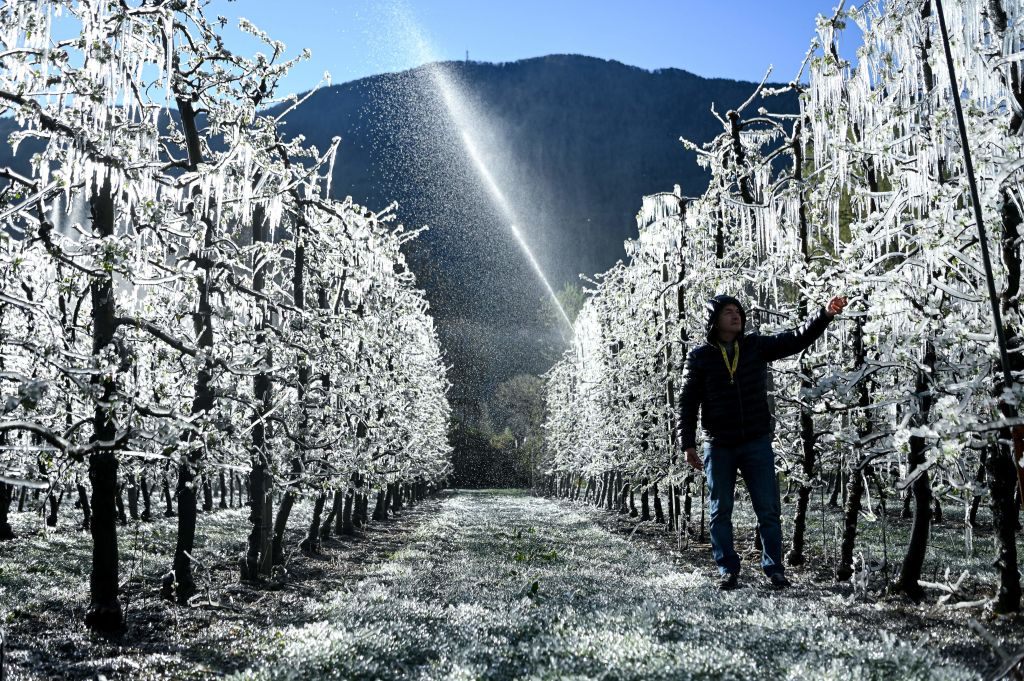 This dreamy scene may prevent a nightmare. Piero Cruciatti/Getty Images
In This Story
Destination Guide

Nestled among the Orobic Alps, the Italian valley of Valtellina is known across Europe for its glorious apples. The fruits grown on its terraced slopes are recognized by the European Union as products of protected geographical indication, due to their their distinctively crunchy texture and fragrant flavor.

The trees themselves have also turned the valley into a destination. During spring, hikers and bikers flock to trails among the flowering apple orchards and their stunning Alpine backdrop. But in recent weeks, the valley has made headlines for a dramatic reason. The farmers of Valtellina deliberately froze their flower-covered apple trees, sheathing them in ice.

After unusually warm weather in March, Arctic air swirled into southern Europe, driving April temperatures well below the monthly average. Farmers across France, Italy, and Spain rushed to defend their crops from the cold. Many winemakers, for example, lit giant candles along rows of wine to keep temperatures from dropping too low. For days, photos of eerie candle-lit vineyards went viral on social media.

The apple producers in Valtellina, on the other hand, resorted to an unlikely ally to fight the cold: ice. “Farmers rushed to the mountains to cover apple trees with a thin layer of water,” said Jacopo Fontaneto, a spokesperson for the local chapter of Italy’s farmers rights association, Coldiretti, in a press release. “This way they were able to freeze the plants, saving them from the frost.”

In photos, the trees look like ice sculptures shimmering in the April sunlight. Their ice coating stands in sharp contrast with the snowless mountains in the background. Beneath the thin ice, the apple blossoms look like they have been frozen in time.

No matter how beautiful, though, chilly temperatures generally wreak havoc on crops, especially delicate flowers. But instead of destroying either the trees or the buds, the ice actually protects them. When the ice melts, the apple trees will be able to resume their blooming, Coldiretti declared in an email statement. “Apple flowers can survive up until temperatures of -1.5 °C [29.3 °F]” the agency stated. “By spraying water when temperatures are still between 0.5 and 1 °C [around 32 °F], we create a thin layer of ice that keeps flowers at that temperature.” The same science applies to igloos. These iconic Inuit constructions stay warm inside thanks to the insulating properties of their snow walls, since ice has low thermal conductivity.

According to Silvia Marchesini, president of the local chapter of Coldiretti, around 25 percent of apple orchards in Valtellina are equipped with anti-frost irrigation systems. The giant sprinklers spray trees with water, so that when the air reaches a certain temperature, the trees will freeze.

Sadly, the trees in Valtellina without such protections suffered the full brunt of April’s unseasonal frost. The vast majority of the apple trees in the valley took significant damage. Overall, it’s estimated that farmers across northern Italy will lose as much as 75 percent of their annual production.

The culprit behind the freeze is well-known. “Italy is experiencing the impact of climate change,” the local chapter of Coldiretti declared in a statement. “The weather is becoming tropicalized with a higher frequency of extreme events.” Because of this, ice will become an even more important tool for farmers in the future. After assessing the damage done to apple trees in the area, Fontaneto said that both Coldiretti and regional authorities will take the first opportunity to equip more orchards with anti-frost irrigation systems. Hopefully, that means the valley will continue to bloom in the years to come.

How one of the country's favorite apples went from pint-sized to pound-sized.
trees

Which trees will live and which ones will die?
gardens