The ‘Torture Orchard’ Is a Testing Ground for the Coming Climate Crisis - Gastro Obscura
Want to see fewer ads? Become a Member. 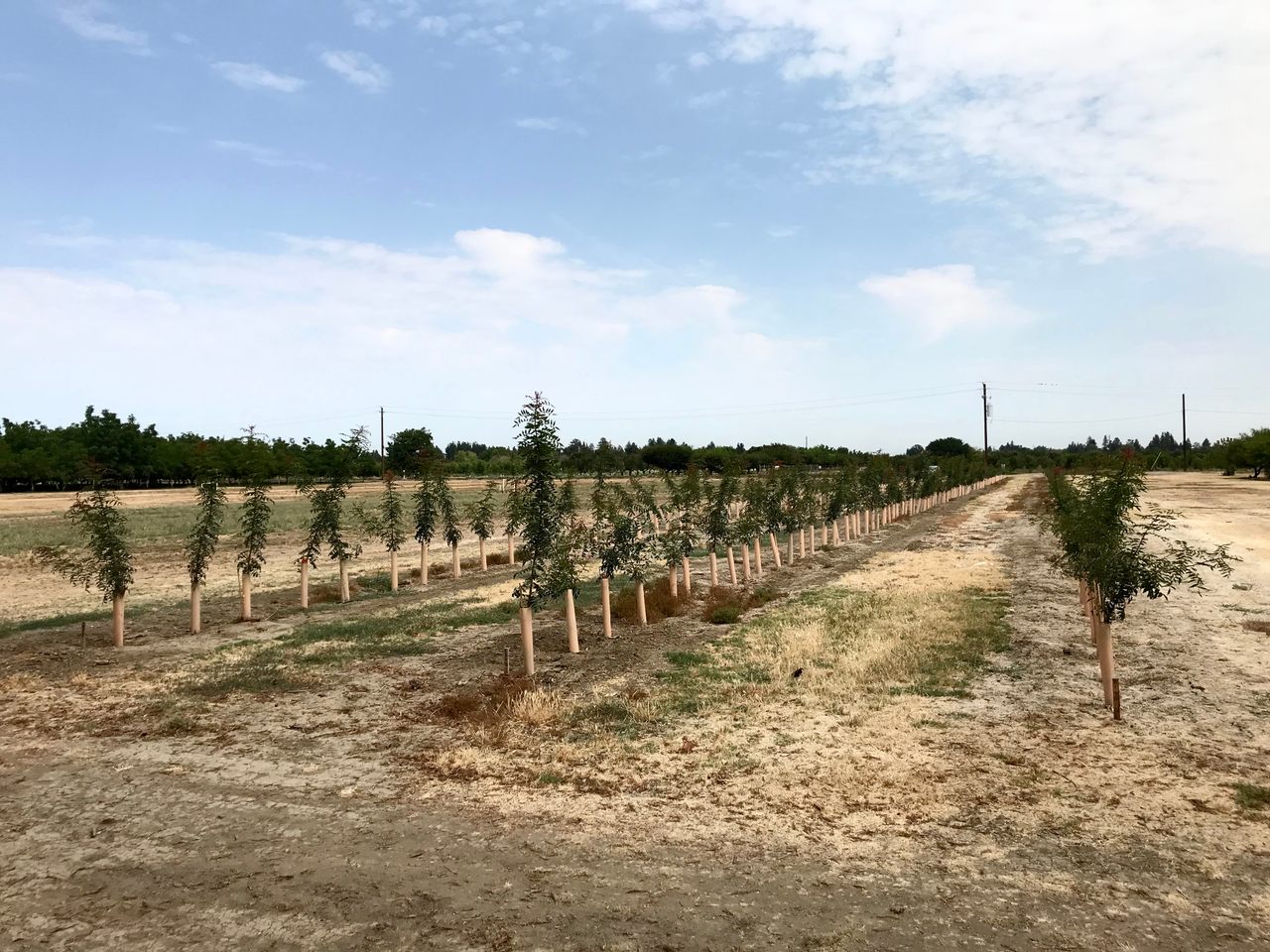 Trees suffering in the torture orchard. Courtesy of Pat J. Brown
In This Story
Place

One of the world's oldest and most massive living organisms is a grove of quaking aspens.
Destination Guide

For California’s fruit trees, 2021 was a thirsty year. Nearly 90 percent of the state experienced extreme drought. More than 70,000 farms, which grow a third of the country’s fruit and nuts, including $6 billion worth of almonds annually and nearly $1.6 billion worth of pistachios, scraped by on reduced water rations.

By all indications, these severe water shortages are just a taste of what’s in store as weather patterns grow more extreme. Fruit and nut trees live, on average, for 40 or 50 years, which means that the ones planted today need to be able to survive whatever conditions the climate crisis throws at them a half century from now.

“I’ve compared it to two great battles in World War II: You had D-Day, which was a frontal assault, and Dunkirk, which was a strategic evacuation,” says Pat J. Brown, a plant breeder and professor of plant sciences at UC Davis. In the case of our rapidly warming planet, scientists are already stocking the lifeboats. “With climate change, for a while we were talking about stopping it from happening. Now, we’re talking about adapting to it.”

Enter the “torture orchard,” the cheeky nickname for 80 acres of the Wolfskill Experimental Orchards where researchers see exactly how much abuse 20 varieties of trees can take. The hope is to develop a generation of pistachio, almond, walnut, pomegranate, and other fruit and nut trees able to withstand the inevitable droughts.

“The origin of the ‘torture orchard’ was we had a bunch of pistachios that we established in the fall, then we ripped up the irrigation in May and didn’t water them all summer,” Brown says. “The idea was to see who lives, who dies. That was extreme torture.” It turns out that pistachio trees are especially resistant to drought and the resulting high levels of salinity in the soil. “[The experiment] was sort of a failure because they all lived. We didn’t kill a single one.”

While those results sound promising for pistachio-lovers, we don’t yet know whether they will hold in a commercial orchard. That’s because both the conditions and plants differ dramatically from an actual fruit orchard. Rather than growing a whole tree from a single seed, most commercial orchards rely on a rootstock, essentially a stump and root system, grafted with a scion from a genetically distinct tree.

“You wouldn’t enjoy eating the pistachio nuts from the trees we had in the torture orchard, because they’d be tiny,” Brown explains. “In a commercial situation, you divide and conquer. You have one species that you use for the rootstock that you can breed for drought resistance or salt tolerance, but for the top, for the scion, you can use something that will produce big, tasty fruit or nuts.”

The rootstock half of these Frankenstein trees tends to come from a handful of genetically identical clones. Brown estimates that on California’s 312,000 acres of pistachio trees, there are only a half-dozen genetically distinct rootstocks. “The exciting thing about genetics and breeding is that these innovations can be completely free to everyone,” Brown says. “If we find a DNA variant that lets you use five percent less water, we’re basically getting that for free from the point of view of the planet.”

If he and his colleagues can identify the rootstocks’ pressure points and develop even a few new varieties, it could help save the industry. Whether it’s high levels of salt or boron in the soil, those weak spots are different for each species of tree. For instance, the high-salinity trial that the pistachio trees survived successfully slaughtered every walnut tree.

“Every tree has its Achilles’ heel when it comes to climate change and sometimes it might be tough to predict,” Brown says. “We should be worried about pistachios from the chilling perspective. A lot of these deciduous trees need winter cold in order to flower properly in the spring.”

Pistachio trees aren’t alone in their need to hunker down through the cooler months of the year. The more researchers study trees, the more evidence emerges of the multitudes they contain. We now know that trees communicate with one another through subterranean fungal networks, that a forest of 47,000 quaking aspens actually shares a single root system and genetic code, making it the single largest organism in the world, and that, much like humans, trees need their rest.

“We think of trees as dormant in the winter, but their metabolism inside is churning away,” says Ken Shackel, a plant scientist and professor at UC Davis. Like Brown, Shackel jokes that he “tortures plants for a living,” although since he routinely works in growers’ orchards, he usually tries not to murder them. “Just because something looks like it’s sleeping doesn’t mean that it’s not busy. The dormancy is an adaptation of the trees for waiting out the winter.”

Shackel likens the process to bears, who enter a state of torpor in winter. In the past, humans assumed that bears simply slept for up to seven months; after researchers placed cameras in their dens, they found out that this was far from the case. Like mammals, deciduous trees use these periods of low external activity for a whole host of biological functions.

“As things get warmer in the winter, they may burn out of their reserves and have nothing left in the springtime to blossom,” Shackel says. “That would be catastrophic for fruit trees.”

One of Shackel’s most troubling findings is that the ramifications of severe drought or other problems can last for multiple seasons. While the stressed-out trees managed to produce a few flowers in the spring, the following year was worse. “The next year, when you see the carry-over effect, then you actually have almost double the reduction in yield,” Shackel says.

In order to measure the amount of stress trees are under, Shackel developed a pressure bomb—so named because earlier iterations of the contraption looked like a bomb calorimeter—to measure the botanical equivalent of blood pressure. “Trees don’t have blood, they have water under tension, but it’s still the same principle,” Shackel says. “Our heart pumps blood using pressure and trees get water out of the soil through suction.” Using the device, Shackel and his fellow bombardiers found that under drought conditions the “blood pressure” of the almond trees soared to roughly four to 12 times the normal level.

Despite all the research underway, Shackel worries that growers aren’t taking the threat of water shortages seriously enough. Growers may soon need to rely on lower-quality water recycled from cities. Certain species of trees require so much water, however, that transporting it presents serious challenges. “Even the recycled water from Los Angeles wound be a fraction of the water needed for the states almonds.”

As with many issues surrounding climate change, the underlying problem is that few people want to spend money now on the problems of tomorrow. “Growers prefer that politicians just give them the water that they need, but it may be that there just won’t be enough water to go around,” Shackel says. “There’s a fear of the unknown because of the risk of adopting a new variety. If you have a new tomato or wheat variety, you can try it for a year and if it doesn’t work out, no biggie. With a tree, you’re making an investment for the next couple of decades.”

Not all of the news is dire, he says. California’s varied geography and latitudinal sprawl make the state well-positioned to keep growing a diverse array of crops. The vineyards of Napa may need to migrate north, as may the pistachio, almond, and walnut trees. Much like humans, trees are remarkably adaptable, provided they have time to adjust. “I’m of the opinion that plants just don’t like surprises,” Shackel says. “If something happens slowly, they function at a lower level, but they’re pretty good at surviving as long as something doesn’t hit them like a ton of bricks.”

The ton-of-bricks scenario, or the sudden onset of extreme drought or weather conditions, is what worries researchers. As the torture orchard proves, a single violent shock can have lasting repercussions. Shackel and his colleagues hope for a future in which humanity can continue to thrive on a diverse food supply that includes fruit and nut trees. But when talking about food security in the kind of dystopian nightmares envisioned by writers such as Octavia Butler, Paolo Bacigalupi, and Margaret Atwood, climate scientists tend to focus on ramping up production of utilitarian crops like corn, wheat, rice, and soybeans.

“I don’t want to sound like a survivalist, but push comes to shove, you need carbohydrates, calories, and maybe some protein,” Shackel says. “If it gets to that, maybe we’ll all be eating Soylent Green.”

Freezing the trees, blossoms and all, may be the only way to save the crop.
trees

How one of the country's favorite apples went from pint-sized to pound-sized.
farms

A new project emphasizes practical designs that may stave off desertification.
farms