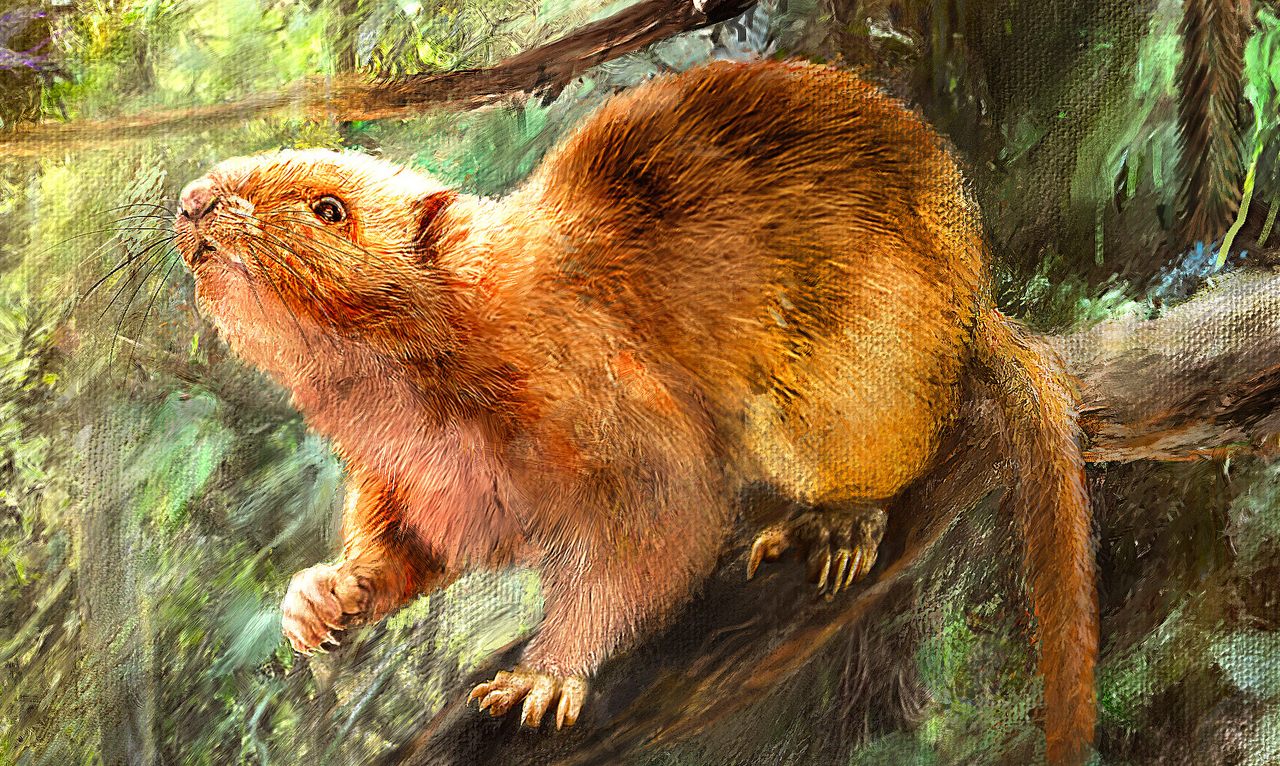 An artist's rendering of one of the three new giant cloud rat species. © Velizar Simeonovski, Field Museum
In This Story
Destination Guide

They are rodents of unusual size, in an unexpected place. Fossils of three new species of giant cloud rats have researchers in the Philippines scratching their heads: The find, on the island of Luzon, hints the archipelago—one of the most species-rich places on the planet—was somehow even more biodiverse in the past. But it also raises questions about how these fluffy, pot-bellied rodents ended up in a cave, outside their usual habitat, and why they went extinct.

The giant cloud rat fossils come from Callao Cave and its immediate vicinity. The site has made headlines before, in 2019, when researchers announced the discovery there of fossils of Homo luzonensis, the newest addition to our extended human family. The oldest cloud rat fossils date to about 67,000 years ago, and were found in the same layer of excavation as H. luzonensis. The youngest rodent fossils, from two of the three species, are just a few thousand years old.

“The living fauna here is already staggering in its biodiversity, but adding these animals, in the fossil record, is amazing, even to us. I didn’t expect them,” says Janine Ochoa, an archaeologist at the University of the Philippines Diliman and lead author of the new paper. “This is the first time we’ve had information about the prehistory of this tremendous diversity of animals,” adds Larry Heaney, a coauthor and curator of mammals at Chicago’s Field Museum.

Even though the fossils are mostly teeth—those recently found at the site as well as previously unstudied specimens collected there decades earlier—there was enough variation to confirm multiple new species. “When all you have is a tooth to go on, it’s hard to identify those animals,” says Louisiana State University evolutionary biologist Jake Esselstyn, who studies small mammal evolution on archipelagos. Esselstyn edited the paper but was not directly involved in the research. “The fact that they found teeth and fragments of skulls that are different enough to clearly show that they are new species is remarkable in its own right,” he adds.

There are nearly 20 living cloud rat species in the Philippines, the only place they are found, and each has carved out its own ecological niche, like the finches of the Galápagos. Some rats are arboreal leaf-eaters, while others subsist on earthworms. The shy, nocturnal furballs earned their nickname because most live in cloud forests: isolated, island-like mountaintop ecosystems. Several cloud rats, including the newly discovered fossil species, are considered giants, at least by rodent standards: They weigh about twice as much as your average backyard squirrel. According to genetic studies of living cloud rats, all of them descended from a single ancestral population that arrived about 14 million years ago.

Heaney notes that the vast majority of the Philippine archipelago has never had a land bridge connection to the rest of Asia. “For any animal to get there, they had to fly, float, or swim,” he says. He thinks the cloud rats’ ancestor may have hitched a ride on a log that floated from mainland Asia, perhaps driven by a storm. Arriving on an island without predators or competitors would have been like landing in paradise for that founder population. “There’s nobody else like you living there. So there are lots and lots of opportunities to evolve in different ways and use different resources.” The animals’ diversity makes them a popular subject for researchers studying island biogeography and evolution—two fields that attract scientists to the Philippines.

“Archipelagos are often thought of as natural experiments in evolution by biologists,” says Emily Roycroft, an evolutionary biologist at Australian National University who was not involved in the new work. In addition to being separated by ocean, each island tends to have a range of habitats, from lowlands to cloud forests. Smaller, more isolated gene pools can also accelerate the development of unique traits as the populations adapt to their specific habitats.

Roycroft says finding multiple extinct giant cloud rat species is important because of the near-absence of any rodents in the Philippine fossil record. “These three new extinct species act to remind us that the living species we observe today are only part of the diversity of life, some of which persisted until quite recently,” she says.

Most cloud rats today live at higher elevations, but Callao Cave is in the lowlands. While Ochoa and Heaney are cautious about speculating how the animals ended up in the cave, Esselstyn is less circumspect. “People bringing them there is the obvious explanation,” he says. “It could be a coincidence, but rats don’t really have a reason to go deep into caves on their own.”

Roycroft, however, isn’t so sure. She notes that while it’s possible that H. luzonensis or our own species brought the cloud rats into the cave, all the other mammals found so far at the site are lowland species, or generalists that moved between elevations. “It seems plausible that these extinct species did in fact occupy lowland habitats,” Roycroft says.

If these giant cloud rats turn out to be lowland species, biologists will have to rethink what they know about the animals. “Rat diversity in the Philippines is highest at middle and high elevations. There are not a lot of rat species that live in low-elevation forests,” says Esselstyn. “For a long time, we thought that was a natural phenomenon, not caused by human impact, but this makes me wonder if it was simply the result of low-elevation species extinction.”

While it’s unclear what happened to the giant cloud rat species found only in the oldest layer of the dig, the other two species “made it until a couple thousand years ago and, apparently, at that point disappeared,” says Heaney. And yes, it’s probably thanks to the usual suspects behind species extinction. “The fact that it lines up temporally with when modern humans arrived [to the Philippines] and brought invasive species and livestock is an interesting clue,” says Esselstyn, drily.

The now-extinct giant cloud rat species may have been outcompeted by animals introduced by humans or, given their meaty size, hunted to extinction. Ochoa says she and her colleagues are just at the start of understanding this previously unknown chapter in the giant cloud rat story. “The sad part is, they’re gone now,” says Ochoa. “We want to investigate why.”

From a flightless giant heavier than a polar bear to a super-glider with a 24-foot wingspan, avians ancient and modern compete for the crown.
islands

More room to roam for the islands' unique fauna.
science

Scientists have pieced together a detailed biography—including a search for love and a violent end.
islands

Back when reptiles were all the rage, Adalatherium really stood out.
Video • PinDrop