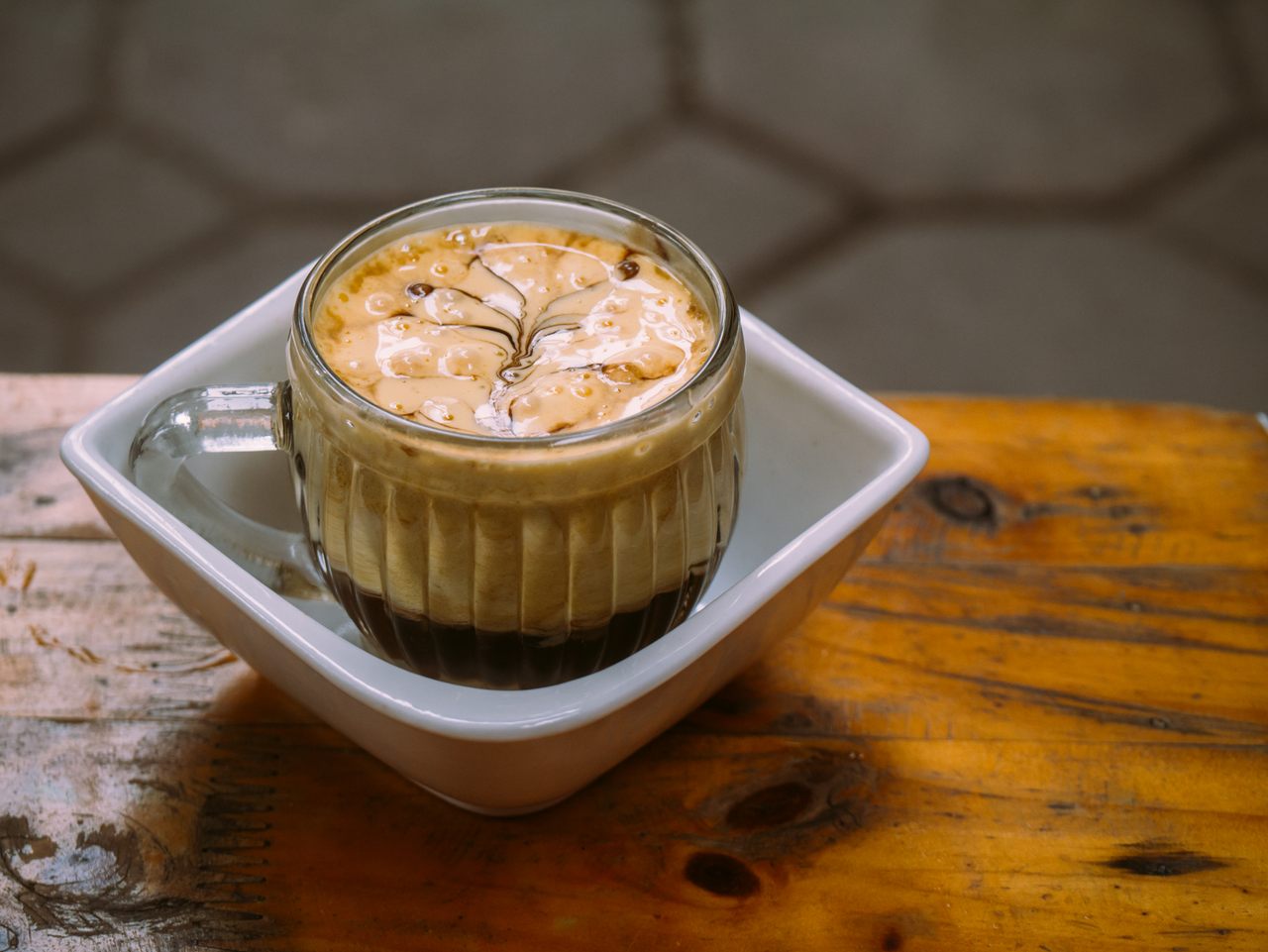 An egg coffee in Hanoi. Rafa Elias/Getty Images
In This Story
Food

A decadent blend of coffee, whipped egg, and butter have made this wartime invention a modern-day favorite.
Destination Guide

During World War II, Nguyen Gian faced a problem: a milk shortage. He was working in a hotel in Hanoi, Vietnam, and his solution was to mix whipped eggs into the coffee. This classic case of constraints spurring creativity is widely credited as the moment that cà phê trứng, or Vietnamese egg coffee, was invented.

Over the years, Gian, along with other residents of Hanoi, a highly caffeinated city, developed egg coffee into a drink you want even when plenty of milk is on the table. It combines the strength of Vietnamese coffee—whose unique coffee culture is powered by robusta beans, rather than the arabica beans ground and brewed in most of the world’s coffee shops—with a sweet frothiness that makes lattes taste like diet drinks.

I’ve long been curious about cà phê trứng, which occupies the Venn-diagram center of my coffee preferences: sweet and strong. So, last week, I spoke with Sahra Nguyen (no relation to Gian) of Nguyen Coffee Supply about Vietnam’s coffee industry, egg coffee, and how to make it.

I know the idea of putting eggs in coffee is unfamiliar to many people, maybe even strange. Can you tell us what the egg is up to in egg coffee?

I’m a huge fan. It’s not something I make regularly—at least in my world, it’s regarded as a bit of a treat, a bit decadent. It’s insanely delicious. You only use the egg yolk, but the flavor is not super yolky. When whipped, it’s the texture, not flavor, that comes through.

You want to add the egg cream when the coffee is still pretty hot to “cook the egg.” When taking a sip, the best part is the hot, bold coffee and cool, silky cream. Those contrasts create this heavenly experience.

Could you tell me about the backstory of egg coffee?

Vietnamese coffee is thought of as paired with condensed milk. Why is that? Because for generations, people did not have fridges, and many still don’t. So condensed milk became popular.

Egg coffee is really famous in Hanoi. It’s because of the limitations of not really having espresso machines until recently, not having fresh milk until recently. Egg was a feasible way to complement coffee and give it a dessert treatment, to make it special.

What is different or unique about Vietnamese coffee in general?

Vietnam is the world’s second-largest producer of coffee. And it’s #1 in robusta beans. There are two main varieties of coffee beans: robusta and arabica. In the U.S., almost 100 percent of craft coffee is centered around arabica. In Vietnam, it’s 99 percent robusta.

It’s so wrong, and harmful to communities at the end of the supply chain that farm robusta. They’re boxed into economic exploitation, poverty. They can’t advance their product and livelihood because the industry decided it’s not good, which is just not true.

How did this happen?

That’s a deeper conversation for a historian or anthropologist, but I’d say Vietnam has been pushed into the commodity market, like instant-coffee products, because the communist government standardized the price of coffee across the board, so farmers had no incentive to improve their coffee’s quality. That’s when Vietnamese coffee entered the market, and that’s the root of the perception.

Yeah, actually. I drink our Vietnamese coffee every day. It hits me still, but not like it did three years ago [before starting Nguyen Coffee]. When I drink a non-robusta blend, I feel nothing. It’s like water.

How to Make Egg Coffee

Additional recipe notes: If you are kinda cheap (like me) or a masochist (like me), you can hand whisk instead of buying or borrowing an electric whisk. My colleague Sam O’Brien recommends listening to “Freebird” while hand whisking, which I found helpful. Nguyen’s video tutorial contains a trick for telling if you’ve whisked well enough. You may also want to stir the egg cream before taking your first sip!

Lampreia de ovos comes loaded with sugar, eggs, and the long history of glorifying a most peculiar parasite.
military history

Walk through a clothing store, across a courtyard, and up several flights of stairs for delicious coffee with a side of beautiful views.
Hanoi, Vietnam

The spot where the two men ate together now stands enclosed in glass.
Genoa, Nevada