Eat Like a 19th-Century Shaker With This Simple Lemon Pie - Gastro Obscura
Want to see fewer ads? Become a Member. 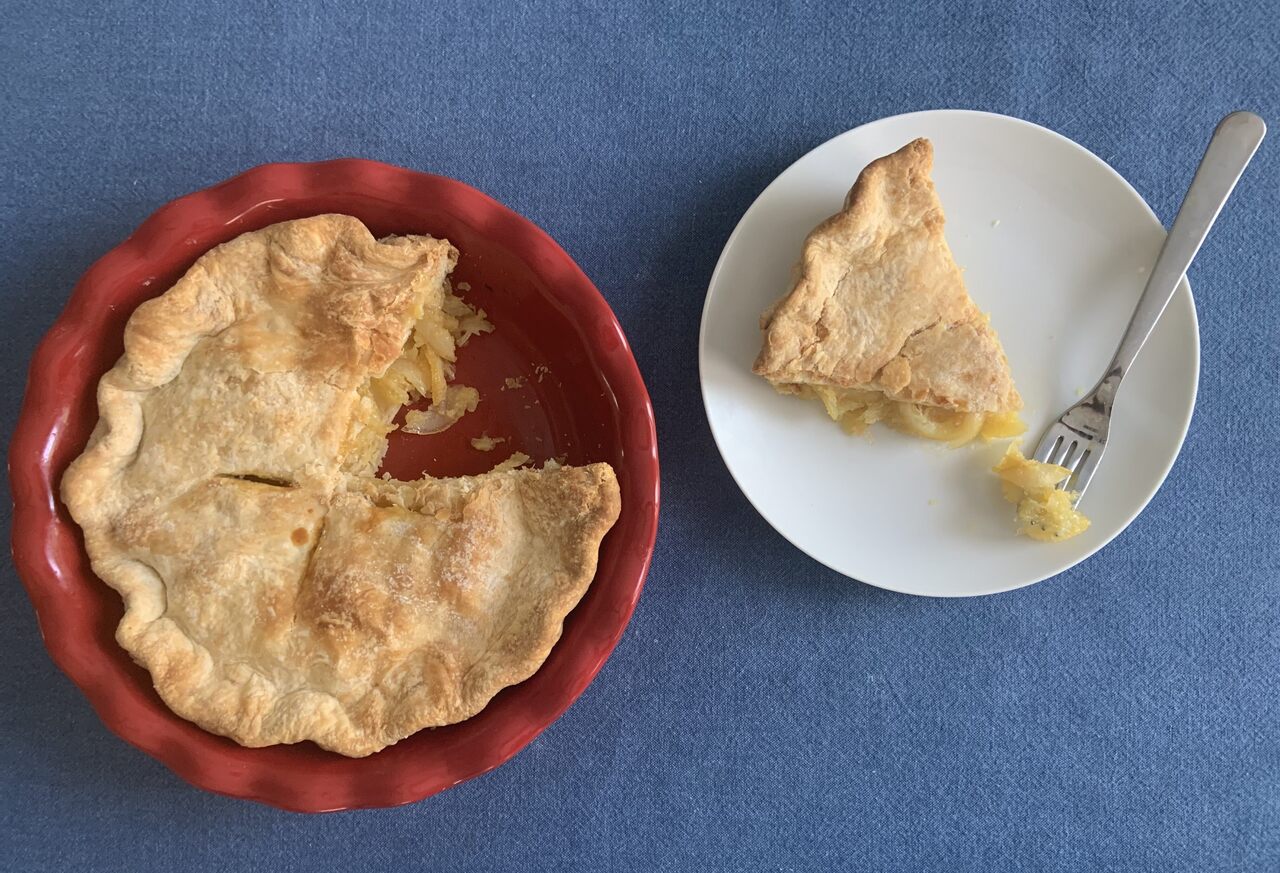 Just three ingredients go into the filling of this humble pie. Sam O'Brien for Gastro Obscura

In 1888, a woman named Hester A. Pool recounted her visit to a Shaker village in Mount Lebanon, New York, in a periodical known as The Manifesto. While the community lived simply, Pool found herself marveling at the advancements within its kitchen, “a large handsome room fitted with every convenience” that left her “with the feeling of pity for the housewife who does her cooking in the ordinary way.”

While Pool doesn’t describe everything she saw, it was not uncommon for Shaker kitchens to impress visitors with their tools and the exacting precision of the “kitchen sisters” who operated them. Giant ovens with revolving shelves baked multiple pies and loaves at a time, double-stacked rolling pins created awe-inspiringly thin dough, and slicers clamped to tabletops allowed for easy, speedy vegetable chopping.

Kitchens showcased the artful efficiency that became a hallmark of Shaker communities. Also known as the United Society of Believers in Christ’s Second Appearing, the Shakers originated as a sect of dissenting British Quakers. The small group fled to North America in 1774 to escape persecution (although they’d adopt their nickname, “Shakers” or “Shaking Quakers” were initially insults that mocked the ecstatic trembling or whirling that occurred at services in their early years). By 1840, more than 3,600 Shakers were living according to the tenets of equality, celibacy, separation from “worldly” society, and a faith in God expressed through goodness in all tasks. As communities appeared across the Northeast and as far as Ohio and Kentucky, this drive for self-sufficiency and well-executed labor spurred the Shakers to develop or adopt incredibly efficient methods and tools.

Shaker furniture is the most well-known embodiment of the culture’s elegant execution of humble work. But those looking for a more delicious example can turn to Shaker lemon pie. Beyond the crust, it consists of just sugar, lemons, and eggs that bake into a sweet-and-sour filling. The epitome of thrift, the 19th-century recipe uses every part of the lemon but the seeds.

“At first, I was a little skeptical,” says Amber Hokams, the head chef at the historic Shaker Village of Pleasant Hill, Kentucky. “With the rinds and everything, I thought, This can’t be good. But it’s very well balanced. It’s not punching you in the face with sugar, but it’s also a little tart.”

While Pleasant Hill’s days as an active Shaker village ended in 1910, the site now operates as a living museum that showcases the architecture, agriculture, craftsmanship, and cuisine of its original residents. Hokams works with an archives team to find old journal entries that inform her menu. “Most of the food that they were eating was a little bland compared to what people find palatable now, ” she says. For that reason, Hokams adds modern, Southern spins to most of the dishes at the village’s Trustees’ Table restaurant. Otherwise, “I would have a hard time filling seats,” she says. But the one dish Hokams does not modernize is Shaker lemon pie. It’s not only the most historically authentic dish on the menu; it’s also the most popular.

Despite its deliciousness, one would never devour the pie voraciously at a Shaker table in the 1800s. Table manners dictated slow, mindful, quiet dining. According to Ann Lee, Shakerism’s first leader, diners were to “eat their food with thankfulness, without murmuring, and therefore be able to worship in the beauty of holiness.” Scarfing food was frowned upon, but so was not finishing it. Those who failed to do the latter would be admonished to “Shaker your plate” and polish off every last crumb.

By the early 1900s, Shaker populations started to dwindle. The commitment to celibacy required constant recruitment, which proved unsustainable, especially as the world advanced well beyond the Shakers’ simple lifestyle. Outside of villages that became living museums like Pleasant Hill, only one active Shaker community, Sabbathday Lake in New Gloucester, Maine, remains. But even though Shakerism has largely disappeared, its contributions can still be appreciated. Try the below recipe for Shaker lemon pie from Pleasant Hill for a taste of how this humble culture made simplicity into an art.

Adapted From the Shaker Village of Pleasant Hill’s Recipe

The key to this pie is slicing the lemons paper-thin. A mandoline is ideal, but if using a knife, briefly freeze the lemons first for cleaner cutting. One evocative recipe says the slices should be so thin that they flop over a bowl’s edge like a surrealist clock in a Salvador Dalí painting. Remove the seeds and place the slices in a bowl. Mix in 2 cups of sugar and let the bowl sit at room temperature for 24 hours, occasionally stirring to mix further. Some recipes say two hours will do, but sufficiently offsetting the lemons’ bitterness with sweetness takes time. For beautifully syrupy lemons, wait the full 24 hours or, if you can, two to three days.

Use whatever pastry crust recipe you’d prefer, but the “Flakier Pie Crust” recipe from The Best of Shaker Cooking blends 1½ cups flour (sifted) with ½ teaspoon salt, ¼ cup cold butter, ¼ cup lard (for a tutorial on how to make lard, see Gastro Obscura’s pemmican recipe), and cold water. The recipe doesn’t specify water amounts, but 4 to 6 ounces should work; add a little bit at a time and see how your dough responds. Divide the dough in two pieces (with one half slightly larger than the other), form each into a round shape, and place in the refrigerator for 30 minutes. Roll the larger portion an inch or two larger than your pie tin, then line the pie tin with the dough. Roll the other half about one inch larger than your tin (this will serve as the top crust), and chill both in the refrigerator while you prepare your filling.

Beat 4 eggs and mix in 1 tablespoon cornstarch. Many old recipes don’t list cornstarch, but without it, the eggs sometimes bake too quickly. (This results in a pie of scrambled eggs resting atop citrus instead of one smooth, consistent filling.) Mix the lemons and any accompanying syrup or juice with the eggs and pour the mixture into the unbaked pie shell. Add the top crust and cut small vents for releasing steam. Place in a 425-degree oven for 15 to 20 minutes (the crust should turn light golden), then reduce heat to 375 degrees. Bake for about 20 to 25 more minutes, or until a knife inserted into the pie comes out clean. Cool for an hour, then tuck into a slice. Don’t forget to Shaker your plate.

Qurt is salty, long-lasting, and packed with protein.
festivals

History and legend collide in the story of one seriously suggestive sweet.
Video • Wonder From Home

Dine like an American revolutionary at Colonial Williamsburg.
Vienna, Austria

Visiting this café is like visiting the Austrian grandma you wish you had.
Córdoba, Spain