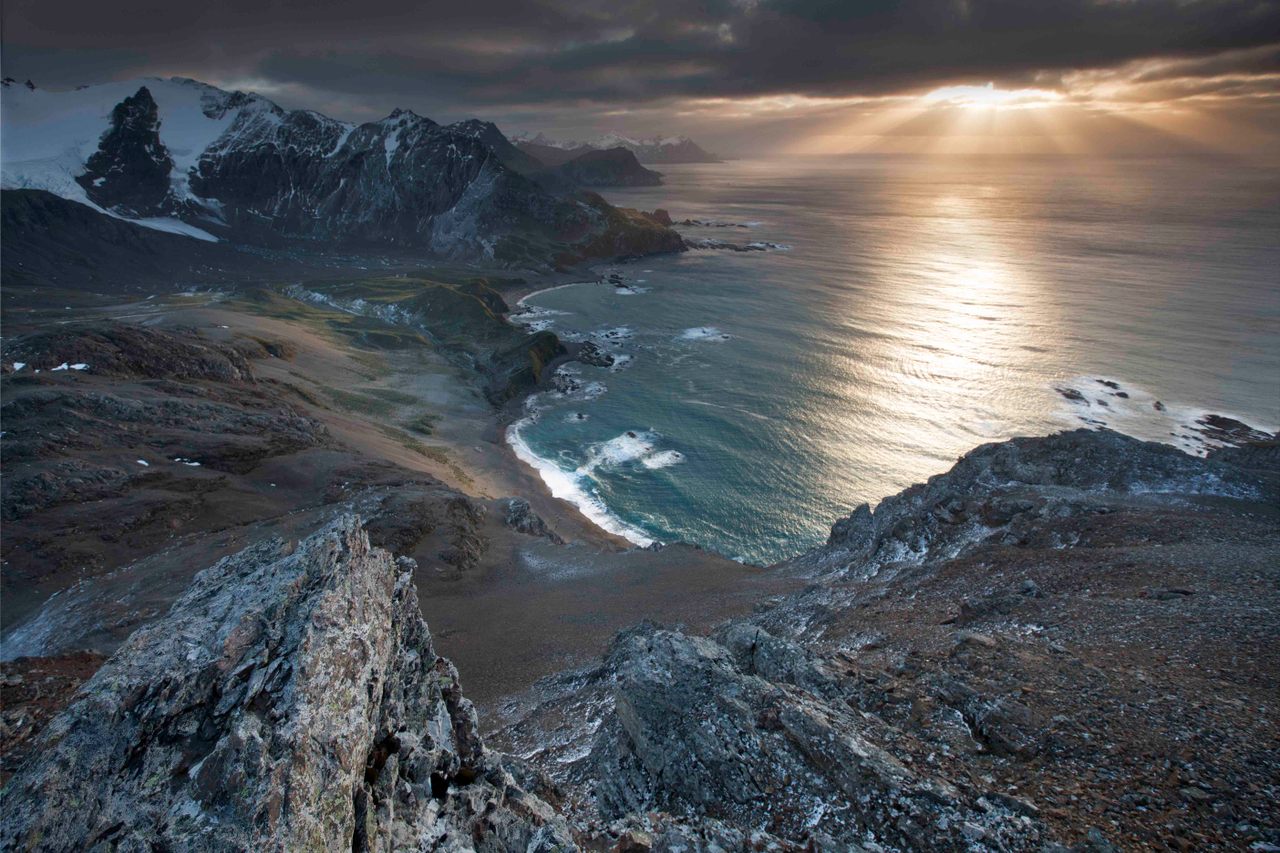 Remote South Georgia Island was once overrun by rats. Oliver Prince
In This Story
Place

The Grave of Ernest Shackleton

Erik Sörling was doing everything he could to catch a rat. It was 1905, and the assistant taxidermist at the Swedish Museum of Natural History had tagged along with the Swedish Antarctic Expedition on a voyage to South Georgia Island. This rocky, windswept landmass is the largest of a smattering of islands—all now designated British Overseas Territories—in the southern Atlantic Ocean, near the Antarctic Circle. Sörling knew it was plagued by rats. He just couldn’t find them.

He followed their footprints in the mid-April snow, then laid out steel traps baited with fish, fried pork, and chunks of carrots and apples. These enticements weren’t enough, and the traps stayed empty. Weeks passed. When the moon was bright, Sörling ventured out at night with a shotgun. He kept spotting their little prints and tracked them through tufts of tussac grass, but all he found were dead ends—at the foot of a stone heap or at the water’s edge, where he suspected the rats scavenged for food. “I was not lucky enough even to see any,” he recalled.

Conservationists have long been concerned about the rodents scurrying around the island. The brown rats are thought to have landed in the 18th or 19th century, as stowaways on sealing or whaling ships that stopped there. While black rats on some of the neighboring islands have kept to a largely vegetarian diet, their brown cousins on South Georgia have been omnivorous and indiscriminate, chowing down on greenery, insects, and the South Georgia pipit—the world’s southernmost songbird, which doesn’t live anywhere else. Apparently, rats have a thing for them. “The pipit is almost absent wherever rats occur,” noted Robert Headland, a former officer in the British Antarctic Survey.

To give the birds a fighting chance, the South Georgia Heritage Trust kicked off a massive rodent eradication effort in 2011. The $13.5-million project covered roughly 400 square miles of the 1,500-square-mile island, and had the tenor of a military assault—tactics included flinging millions of poisoned pellets from helicopters. (The pellet rain was a late-summer project, to limit the collateral damage to king penguin colonies that lay eggs there from November to April.)

Since the island is segmented by glaciers, which rats can’t scramble across, the team could work on one portion at a time. It was slow and methodical work, but by the end of 2016, scientists were pretty sure that they’d gotten all of the rats. They weren’t positive, though, and the stakes are high: “Even one pregnant rat getting back on to South Georgia could restart this whole cycle,” Mike Richardson, the chair of the restoration project’s steering committee, told BBC.

As Sörling had learned, failing to see rats doesn’t mean they’re not there. Finding them sometimes requires superhuman senses. So, for the final stage of the project, the team enlisted some furry, four-legged sleuths with excellent sniffing skills.

Dogs have amazing noses that we can’t even begin to imagine or understand, really,” says Miriam Ritchie, a dog handler and trainer with the New Zealand Department of Conservation, who joined the project as a contractor.

Ritchie starts introducing the dogs early to the animal they’ll be asked to find—months before they deploy. She devises games around the scent, and rewards the dogs with heaps of praise when they successfully follow a trail. “It’s just making use of their natural instinct,” she says.

At home, Ritchie’s working dogs sleep in kennels; older, retired ones, curl up indoors. On the island, the team spent months living out of a little tent with no bathroom or running water. The terriers, Will, Wai, and Ahu, woke up at 6:30 a.m. each morning. After a quick morning walk and breakfast—dry food, canned food, and sausage—they got to work.

The project directors passed along a list of sites for the dogs to check. So, for hours at a time, that’s what they did—off-leash and muzzled, across brown, barren hills and around lakes reflecting white peaks. Most days there was no one else around, but cruise ships occasionally stopped by so passengers could marvel at the penguins.

Massive penguin and seal colonies may look stunning in photographs, but “when you’re right next to them, they absolutely reek,” Ritchie says. “They basically wallow in their poo.” Seals would call to each other, and the sound bounced off the cliffs. “It was endless,” she says. “So noisy, in a good way.” Sometimes, as they descended from a glacial valley, Will and Ahu got excited, thinking that the barking seals were other dogs.

Ritchie says the dogs are “best mates,” but have different demeanors. “Will is very waggy and quite needy—he always wants to bump your foot or hand to get you to pet him,” she says. Ahu, on the other hand, “is quite a cool character,” she adds. “He acts like he doesn’t care, and it’s a privilege for you to pet him.” All of them were focused on the task at hand, and Ritchie watched the dogs closely to see whether they were swinging their tails or scratching a line in the dirt to point to a rat burrow.

They weren’t. “Everyone wants to find nothing, but as a handler, it’s more fun when something does happen,” Ritchie says. It isn’t unusual, she adds, for the dogs to walk around “looking for something that might be there but generally isn’t.” That’s the best-case scenario for ecologists—a clean bill of health for the island—but it’s kind of boring for the dogs. To keep the terriers interested, Ritchie sometimes planted frozen rat carcasses for them to root out. But they never found any live ones.

Once the dogs smelled their way back and forth across the island, the South Georgia Heritage Trust officially declared it rat-free. After a couple of weeks in quarantine, where the three dogs were checked for diseases they may have picked up on the island, they went back to work at home in New Zealand, noses to the ground in search of mice. The dogs didn’t need a lot of down time, and they seem to like running around all day, Ritchie says. “They took it in stride.”

It's not meant to be pleasant.
rodentsratsecologydogsconservationislandsanimals

How Intrepid Biologists Brought Natural Balance Back to the Aleutian Islands

To save birds such as the cackling goose, first the foxes had to go.
islands

A Giant, 'Coconut Eating' Rat Has Been Discovered in the Solomon Islands

Four times the size of the biggest subway-dweller.
science

Invasive predators and other threats have pushed the Key Largo woodrat to the brink. A small but passionate group of scientists and volunteers is pushing back.
Video