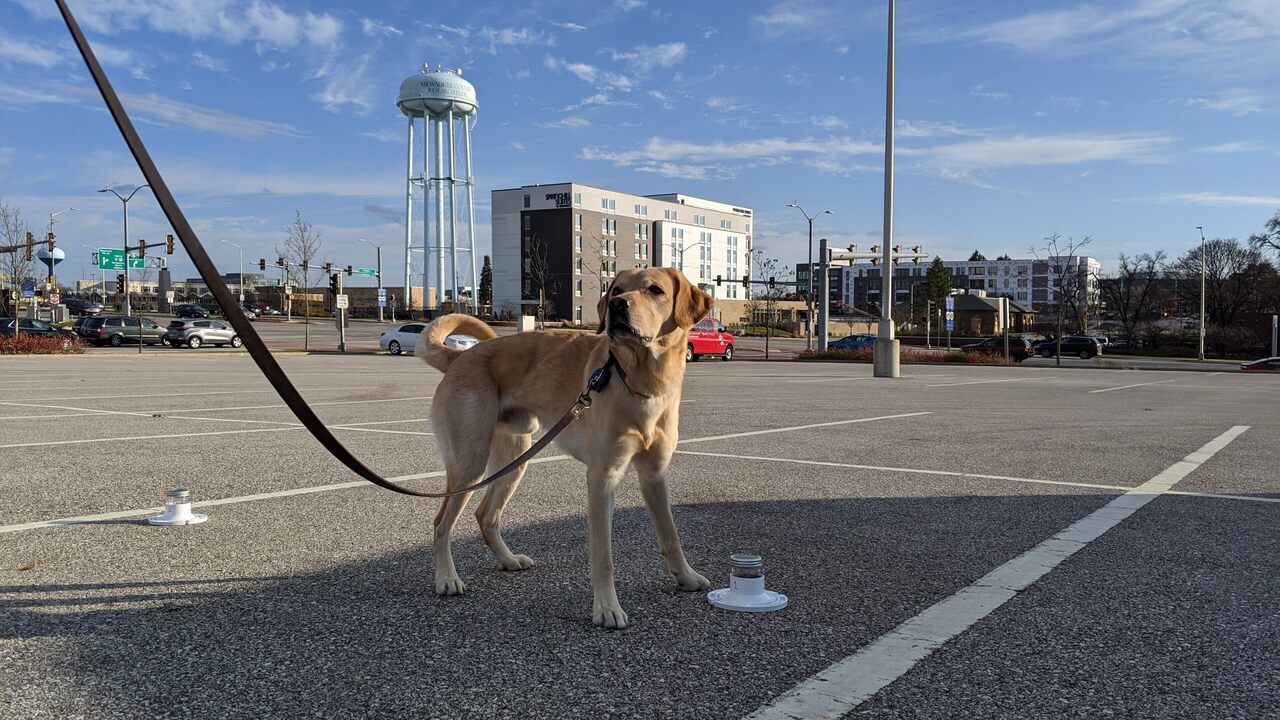 The basement of Laura Holder’s 1925 bungalow looks like many others in her Milwaukee neighborhood. Dappled sunlight streams through glass-block windows onto an assortment of exercise equipment and her husband’s woodworking tools. An unfinished corner houses the washer and dryer and a second fridge and freezer.

But instead of meat and leftovers, Holder’s basement freezer is full of dirt. Eighty-five bags of sediment, to be exact, double-bagged, numbered, and frozen solid. They were collected by biologists with the Wisconsin Department of Natural Resources (WDNR) and sent to Holder’s home, which doubles as the headquarters of Midwest Conservation Dogs Incorporated (MCDI), the organization she oversees. (It will be renamed Conservation Dogs Collective in early 2021.)

One day, MCDI’s Labrador retrievers, Ernie and Betty White, may patrol state-run boat ramps the way dogs have for years canvassed airport security lines. Instead of sniffing for bombs or drugs, they’ll be inspecting anglers for invasive snails smaller than a peppercorn.

At one-eighth of an inch long, New Zealand Mud Snails are so tiny, “you don’t realize they’re there until you’ve got thousands of them,” says Maureen Ferry, Statewide Aquatic Invasive Species Monitoring Lead for the WDNR. The snails’ diminutive size—as well as their ability to survive out of water for 24 hours and on damp surfaces for 50 days—has allowed them to spread from rivers in the American West, where they were introduced in the mid-1980s, to the Great Lakes states. Once established, mud snail populations explode almost instantaneously. One female and its offspring can produce 40 million snails in a year, quickly outcompeting native creatures for food.

In Wisconsin, officials have struggled to control the snail population largely because it’s so difficult to figure out where they are. Relying on eDNA testing—scanning water samples for snail DNA—is slow and expensive. That’s where the dogs come in.

Holder’s dogs are a part of a growing trend of conservation dogs, canines who track invasive or rare plant and animal species for removal or research. Holder has trained her other MCDI dogs—there are five in total—to find wild parsnips, blue-spotted salamanders, and bumblebee nests. Could these dogs learn to sniff for teeny-tiny snails? Holder was game to find out.

The first step is to get the dog used to a creature’s smell. The initial phase of “target odor training” is a process called “pairing”—establishing that when the dog smells the target, they “get paid,” as Holder calls it, usually with treats or toys. To accomplish this, Holder headed to MCDI’s training facility— her basement—and placed about 100 snails (also collected by WDNR) in the bottom of a mason jar, topped with a mesh lid and a bit of string cheese. The first day of training was an easy one for the dogs: All they had to do was smell the snails and get paid.

The next session was slightly more challenging. Holder set up a line of jars, only one of which had snails in it. Instead of getting a treat simply by smelling the target, the dogs had to provide an indication at the jar with the snails—anything from a double-take to a pause in breathing would suffice.

The dogs reported to the basement for work every other day for eight weeks. As training continued, Holder introduced curveballs—other species of snails, for example, or a cotton ball that had spent time in the same jar as a mud snail. “They’d give me an indication, but, like, one with a question mark,” Holder says.

Holder then took the dogs to offsite locations, introducing distractions they would encounter in the field, like passersby and other enticing smells. Two months after training began, Holder finally began digging into the bags of sediment in her basement, transferring the dirt into jars for Ernie and Betty White’s first field trial in front of WDNR officials.

The demo took place on a mild day in November in a Milwaukee parking lot. “I have to tell you, I was really skeptical,” admits Ferry. She and the other WDNR staff members who gathered to watch were the only ones who knew which samples had tested positive for snail DNA.

Holder ran each dog down five rows of seven jars, spaced about two feet apart. At the end of each run, she announced which jars received an indication from the dogs. The results were better than even she expected: Betty White was correct 72 percent of the time; Ernie was 80 percent accurate.

“We were really pleasantly surprised,” Ferry says. Because snail populations are so firmly established in the state, she and other officials at WDNR are beginning to turn their focus from eradication to prevention—stopping the snails from invading new waters. Ferry thinks the dogs could play a role in that effort, sniffing out snails on shoes and watercraft, as well as raising public awareness about how to stop the spread.

Holder confesses she was nervous, but that in her line of work, it’s vital to trust your partner. “Dogs,” she says, “are super freaking smart.”

It took 200 years to rid the island of rats, and three dogs to make sure they were gone.
islands

Researchers are now focused on the coconut palms, to make the atoll more friendly to seabirds.
railroads

Khulan have been on the wrong side of the tracks for far too long.
science

Keep an eye out for the giant sea bass's spots.
Video • AO Docs

The 21st Century Might Not Be So Magical for Fireflies

Experts are flashing a warning for the future.
Read more
Thanks for sharing!