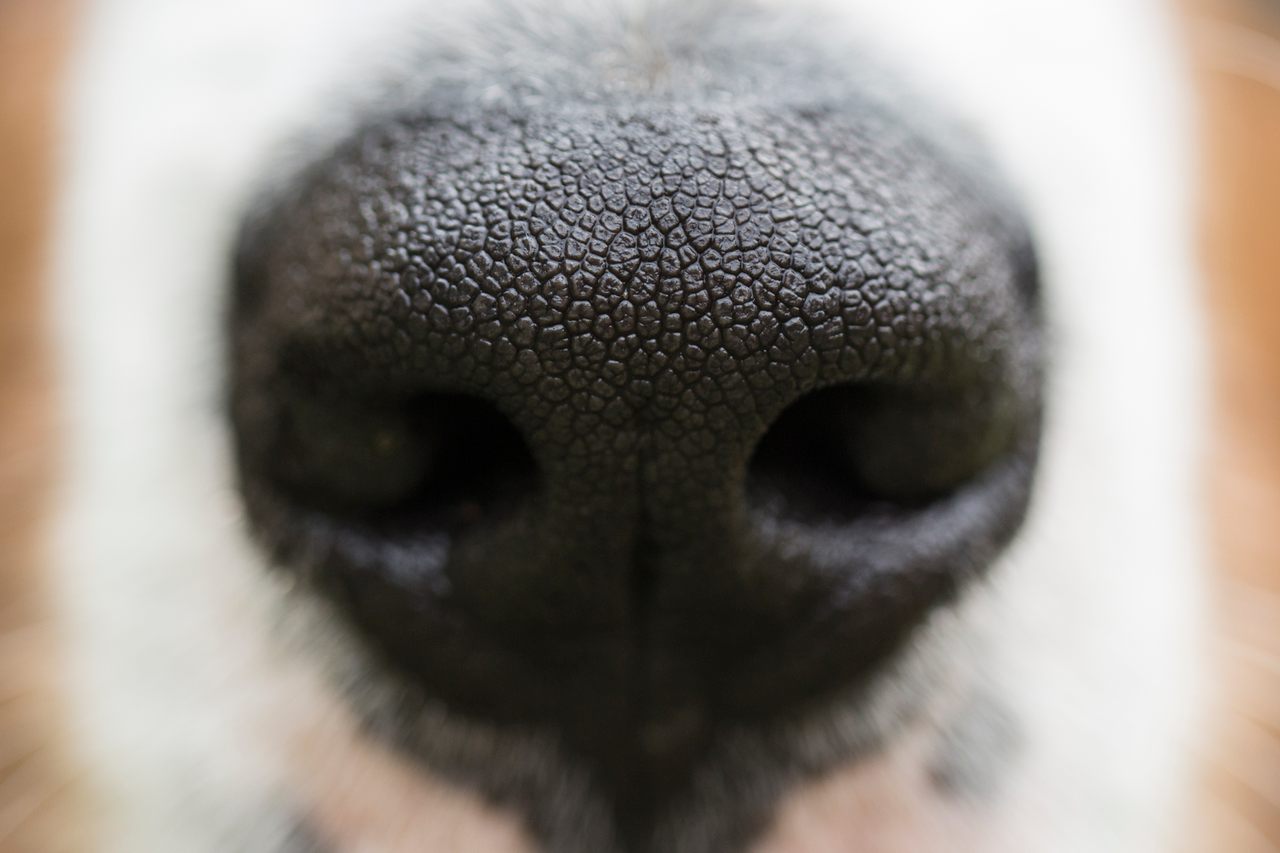 The nose knows when invasive species are present, thanks to dogs' innate superpowers of scent and extensive training. Jennifer A Smith/Getty Images
In This Story
Destination Guide

This piece was originally published in Canada’s National Observer and appears here as part of our Climate Desk collaboration.

At first glance, the boat stopped at a highway checkpoint near Golden, British Columbia, was unremarkable. The smooth, brightly painted hull was scrubbed clean, with nothing to tip off the conservation officers checking the craft for clumps of invasive mussels that anything was amiss.

Kilo—the team’s invasive species detection dog—wasn’t so sure. After a quick sniff and a glance back at his master, the black-haired German shepherd sat down and stared at the boat. It was a sure sign that a mussel was hiding somewhere in the machine, said Sgt. Josh Lockwood, a recently retired B.C. conservation officer and Kilo’s first handler.

Zebra and quagga mussels are small freshwater mussels originally from the Black and Caspian seas. First seen in North American lakes and rivers in the 1980s, they were probably imported by ships dumping their ballast water into the Great Lakes. The mollusks rapidly took hold, growing on everything from irrigation lines to hydroelectric dams, and spread around waterways from the Eastern Seaboard and Ontario to California via contaminated boats.

Only waterways in B.C. and a handful of other western provinces, territories, and U.S. states remain unscathed. Keeping them out is a full-time job for Kilo, his fellow canine mussel-detection partner Major, and about 45 conservation officers scattered throughout B.C.

The dogs are “amazing” at their job, detecting mussels faster and more accurately than people, Lockwood said. With thousands of boats passing through the province’s mussel-detection checkpoints each year, the pups are indispensable to the province’s efforts to keep the mollusks out.

Learning that skill isn’t easy. Training starts when the dogs are still puppies, Lockwood explained. The young dogs live with their future handlers, who introduce them to basic commands. Once they move out of puppyhood, dog and handler both head to the Royal Canadian Mounted Police’s main canine training center in B.C.’s Lower Mainland for a three-month course in the craft of detecting specific smells, like firearms, drugs, or invasive mussels.

Lessons start by introducing the dog to several smells—including the one they are being trained to detect—and rewarding them when they sniff out and react to the desired smell. Once they start linking the reacting to the smell with something fun like a treat or a game of fetch, the trainers start presenting the dog with several scent-filled metal cylinders and asking them to figure out which one is full of the desired smell. “When he finds it and you pay him with his reward, he goes insane and has a lot of fun,” Lockwood said. “It becomes fun for the dog.”

For the human handlers, the trick is learning how each dog reacts and picking up on their cues, he explained. With Kilo, that’s giving his handler a quick glance when he first detects an invasive mussel before taking another sniff. “He kinda goes, ‘Oh, there’s something here… I got it, boss, are you looking at me?’” before sitting down in front of the contaminated boat to show that something is amiss, Lockwood said.

Building that closeness between dog and human takes time and commitment from the dog’s human handler, making it a work relationship that spills over into daily life. Kilo lived with Lockwood full-time during the four years he was the dog’s handler. The job is a “big commitment.” While Kilo is technically “the Queen’s dog,” in practice, he was like a family pet. It was up to Lockwood to take Kilo out for daily walks and evening pee outings.

Lockwood was already well into a career as a provincial conservation officer when he first got involved with the program in 2015. At the time, he “had just no idea” the mussels existed until he was called out by the provincial environment ministry’s environment department to inspect a boat being imported from Texas. The vessel was contaminated, and the province asked him to set up a formal mussel monitoring program.

The mussels can transform aquatic food chains, threatening native fish species like salmon, and grow in thick carpets that can clog farm irrigation lines, hydropower dams, and municipal waterworks. According to a 2013 provincial estimate, cleaning up these carpets would cost B.C. about $43 million, excluding the impact on fisheries, tourism, and other industries that rely on the province’s fresh waterways.

The program grew fast, hiring dozens of inspectors to man checkpoints on highways from the Okanagan to the Peace Country. Soon, the team was joining forces with other zebra mussel inspectors across North America, tapping into a sort of spy network for boats carrying the mollusks. Inspectors from one jurisdiction typically tip off their counterparts in another region when they notice a potentially contaminated boat heading their way, Lockwood said. B.C., Alberta, and Washington state are the only jurisdictions with invasive mussel detection dogs.

When Lockwood retired, he also passed on the responsibility for Kilo’s care to a new person. Letting the dog go—a months-long process where he helped Kilo and his new handler form a bond—came with a mix of emotions, Lockwood said. He was happy the dog found a new home and relished the freedom that came with having no dog to care for. He grew up on a Saskatchewan farm and lived most of his life with animals, meaning that “it is actually nice not to have any commitments.”

As for Kilo, he is busy doing his favorite thing: sniffing out mussels.

A wildlife ecologist specializing in large carnivores unfolds a mystery for listeners.
temples

The region's first and only locally-run hatchery provides a boost for both fishers and the imperiled royal sea snail.
Video • AO Docs