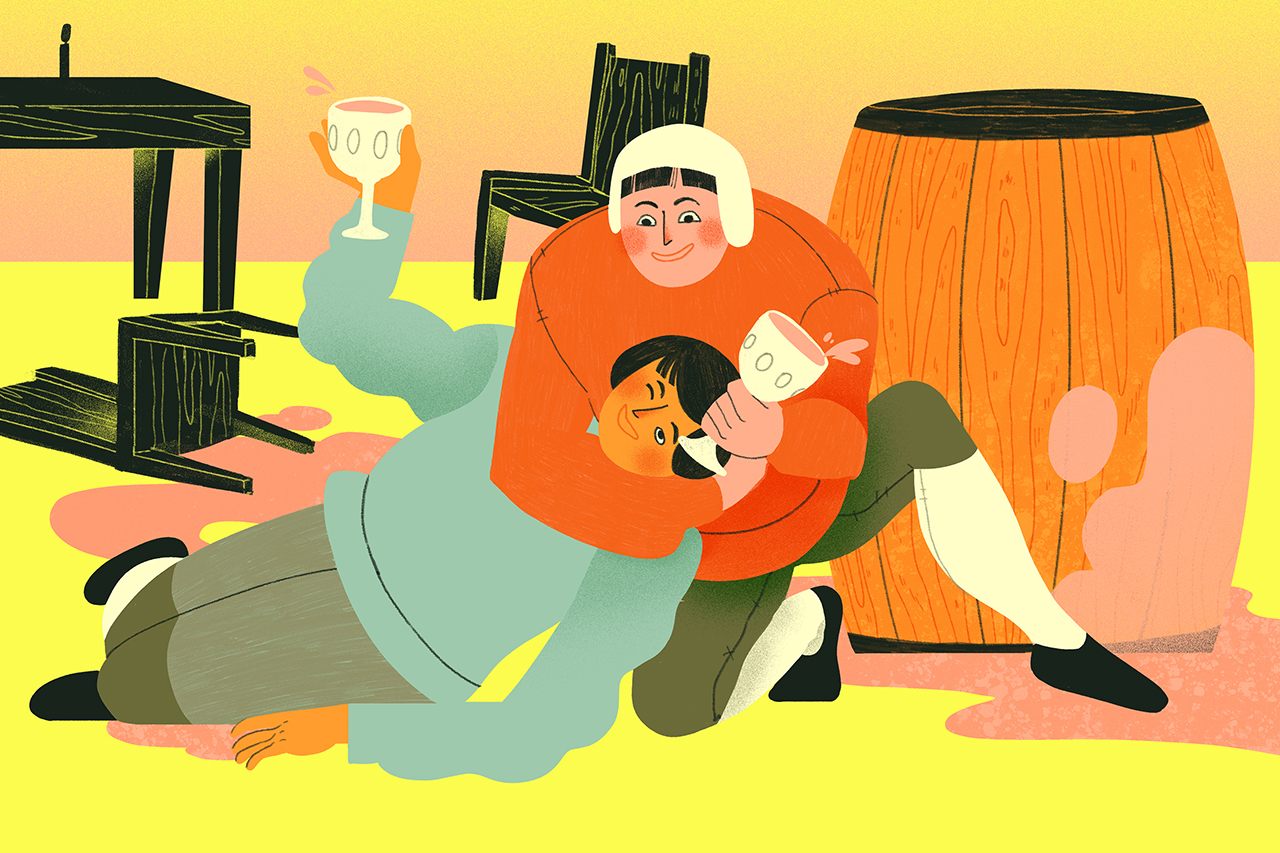 Nothing hits the spot like a bit of wrestling! CHELSEA BECK

This week, we’re remembering historic leisure activities—ways that people kicked back, chilled out, and expressed themselves throughout the centuries. Previously: Ancient hominids painted; the swole women of Sparta wrestled, danced, and drank; ancient Mesoamericans kicked back and hooked up in steam baths; and Vikings hunted on skis skated on bones.

At first glance, the life of a medieval peasant might seem laborious, with long hours spent toiling away in a field from dawn till dusk, interrupted only by the occasional bowl of gruel. But while we may not envy their work conditions—no health care is no joke for a physical laborer—peasants living in the Middle Ages actually had a lot of time to chill.

In stark comparison to the stringently capitalist workweek of the so-called modern era, work patterns in medieval Europe—loosely defined as the years 500–1500—were decidedly more relaxed. For one thing, the calendar back then was stuffed full of religious holidays, writes sociologist Juliet B. Schor in The Overworked American: The Unexpected Decline of Leisure, including long vacations at Christmas, Easter, and midsummer. Not to mention the many saints’ and rest days sprinkled throughout the year.

By one estimate drawn from 14th-century manorial records—documents generated by the administration of manors and estates—most servile laborers in England worked 27.7 hours a week. Compare that to the 47 hours a week that most full-time adult workers in the U.S. toil, according to a 2014 Gallup poll.

Blessed with all that extra time and no access to, or concept of, the internet, medieval peasants in Europe developed a number of lo-fi revelries that helped spice up the slow march toward death that unites us all.

That included a number of games, according to Eleanor Janega, a medieval historian who runs the blog Going Medieval. One was a needlessly complicated dice game called Hazard, beloved in France and England. Written into law in the 13th century by King Alfonso X of Castile, it evolved—in a simplified format—into the game we call craps today. In Great Britain, peasants often played Skittles, an outdoor variant of bowling where players would try to knock down nine pins with a round disk called a cheese.

There were also more physically involved games, including an early Gaelic one that Janega calls “weird wrestling football,” and kolf, an early form of golf that originated in the Netherlands.

Regardless of a game’s particular rules, however, virtually every European medieval amusement ended in a similar kind of chaos. “Everything devolve[d] into wrestling,” Janega says, noting that peasants also considered pure, unadulterated wrestling a worthy pastime in itself.

The medieval equivalent of a sitcom was the farcical play, acted out on small wooden stages in public squares. The bawdiest of these came from France, writes theater historian Jody Enders in “The Farce of the Fart” and Other Ribaldries, and chronicled the foibles of the human mind and body—with a heavy emphasis on the latter. Titles in this genre included Playing Doctor, or, Taking the Plunge (The Farce of the Woman Whose Neighbor Gives Her an Enema) and Shit for Brains, or, The Party Pooper-Scooper. (After all, there are only a few letters standing between a farce and a fart.)

One quintessential farcical play called The Ointment Seller hailed from Bohemia, a historical region in what is now the Czech Republic. Its satire does not stand the test of time, as it mocks Jews, Germans, women, and other groups and communities. In the play, a merchant persuades three ladies, all named Mary, to buy his ointments in order to anoint the body of Jesus Christ. The plot soon devolves when Abraham arrives with Isaac’s dead body in tow and asks for an ointment. The seller delivers an “ointment” that is, in fact, just feces, and Abraham thanks him profusely. “Peasants were not into tragedies,” Janega says.

After seeing a matinee play full of farts, peasants would revel in the opulent bounty of the countryside, hunting, fishing, and swimming. Many of them also took advantage of seasonal gifts, such as gardening in the spring and eating fruits in the summer.

“Peasants were kind of obsessed with spring,” Janega says, referencing the many poems and songs that villagers would write in homage to their favorite season. And when seasonal fruits came to harvest, they binged on berries and drupes. “For a medieval peasant, cherries were really the good stuff,” Janega says.

And, of course, peasants everywhere shared in that one eternal pastime that began long before them—and may outlive us all: drinking. While lords drank wine, peasants drank beer. Many actually brewed beer in their own homes, and made other fermented drinks, like brandy, out of pears or plums.

Ultimately, the peasants of Europe in the Middle Ages loved many of the same things we do today, except with a particular penchant for communal brawls. “It’s wrong to say, ‘Oh, peasants—what a horrible life they led,’” Janega says. “They had really hard work, and life was difficult. But they were also really into having fun.”

Respect the Hammock, One of Humanity’s Greatest Creations

Why Is Wine (Almost) Always Made From Grapes?

On the merits of blueberry, cherry, and pumpkin wine.
monkeys

But proving the “drunken monkey” hypothesis has been an exhausting—and messy—endeavor.
games

Strategic flicking was the name of this game, known as kottabos.
vikings

Vikings Relaxed by Skating on Bones and Hunting on Skis

To chill like a marauding Norseman, drop your sword and take up these ancient winter sports.
Video