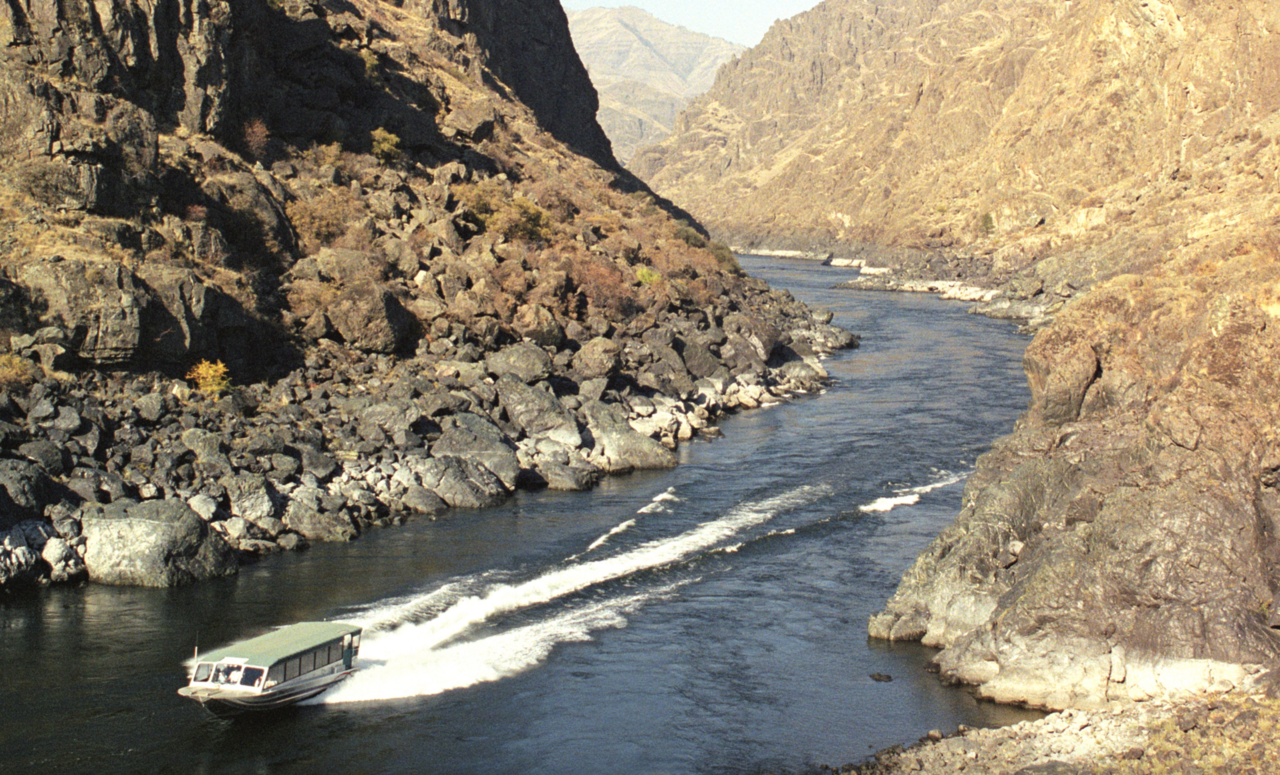 Every Wednesday for nearly 30 years, Jill Koch and her husband Jim go to Hell and back. By jet boat. The couple have weathered storms, swirling currents, and other perils to bring mail, year-round, to the residents of Hells Canyon National Recreation Area—a desolate expanse of the Snake River that traverses Eastern Oregon and Northern Idaho. It’s one of the most remote mail routes in the Lower 48, and has been in operation since 1919.

Stretching for 125 miles along the Oregon-Idaho border and the southeast edge of Washington State, Hells Canyon is North America’s deepest river gorge, its lowest point sitting almost 8,000 feet below the rim. The area had a population boom in the early 20th century when miners settled there in hopes of finding gold, but today the canyon is home mostly to cattle ranches.

The Kochs have been working the river route since 1993. They deliver to 52 registered mail stops along the rugged canyon in their 42-foot boat, sometimes with tourists aboard. Atlas Obscura spoke with Jill Koch about the challenges and joys of bringing mail to “the middle of nowhere.”

How did you get started delivering mail in Hells Canyon?

My husband Jim is a lifelong mariner who operated two 100-foot commercial crab vessels in Alaska. I was the deckhand for eight years. We then moved to Asotin, [eastern] Washington so we could raise our children near their grandparents. In 1993, a realtor knocked on our door to see if we were interested in purchasing a neighboring ranch. When we explained that our main industry was commercial fishing, the realtor told us of a Hells Canyon Jet Boat Tour business for sale. One thing led to another and we purchased Beamers Hells Canyon Tours in 1993 from Wally and Myrna Beamer who started it in 1974, which meant we also acquired the mail delivery contract. Beamers has held the mail contract for 47 years now. Jim operates the boat and I deliver the mail.

When did tourists start riding along on the route?

It didn’t become a tour until 1937 when the Saturday Evening Post published a story on Captain Kyle McGrady, who delivered mail by boat in Hells Canyon to 350 patrons at the time. That’s what started tourism in Hells Canyon. Before that it was mainly delivering the mail, maybe catching a few sturgeon, and trying to sell that to carve out a living—especially through the Depression years. However, once that Saturday Evening Post article was published, everybody wanted to ride along with Kyle and deliver the mail.

What are some of the items you deliver in addition to paper mail?

There is way more mail in the winter than there is in the summer because it’s more difficult for Hells Canyon residents to travel by road. Most of them are stuck there for the winter. So, in addition to letters, periodicals, and packages, I’m also delivering veterinarian supplies, groceries, library books—just about anything anybody could want, they’ll ask me to pick it up for them. We deliver to Washington, Oregon, and Idaho. Everyone in Hells Canyon has the same address: Snake River Route, Lewiston, Idaho.

What are the most challenging parts about the job?

It’s just under a 200-mile round trip that begins at 8 a.m. and finishes by 6 p.m. And we do it every Wednesday no matter the weather. During high water, Jim can pull the vessel in closer to the mail boxes, so I can reach some from the bow of the boat without disembarking. However, during the low water season in summer, it is a longer trek. The mail boxes are not all conveniently located right along the river because as soon as we have high water, it rises 30 or 40 feet. So, the boxes are up high. In the summer I watch for rattlesnakes, spiders, and poison ivy along the rocky shorelines getting to the boxes. Sometimes I have to get in the water to get to them. And not all of them are boxes. Some are 55-gallon drums. I remember once while shoving off at barely dawn we almost ran into a deer swimming across the river. There’s a lot of wildlife in Hell’s Canyon—deer, bighorn sheep, and we have a wonderful eagle population.

There isn’t a whole lot of tourism during winter. The Wednesday before Christmas is always very festive since the patrons are super excited to be receiving their holiday gifts. I always love that day. Most of the time they’re not right by the mail boxes but on that Wednesday before Christmas they’re there anxiously awaiting the delivery of the mail and whatever packages are coming in to celebrate the holiday. We also have Forest Service volunteers along the route who work at facilities that require year-long caretakers. In the middle of winter, the volunteers will bake us cookies to show their appreciation. We really are out in the middle of nowhere, so there’s no one around. Hells Canyon National Recreation Area is 650,000 acres. And so when we untie and shove off in the winter, we really are the only people, besides maybe the mail patrons, that each of us is going to see throughout the day.

The Ups and Downs of Being a Canal Lockmaster

Keeping a 170-year-old tradition alive on the mighty Muskingum.
aircraft

The Pilots Who Risked Their Lives to Deliver the Mail

Being an airmail carrier was one of the most dangerous jobs in America.
museums

Is This the End of Switzerland’s Chimney Sweep 'Mafia'?

The long history and new face of a sooty industry.
boats

Yes, sometimes they fall in the drink.
Video