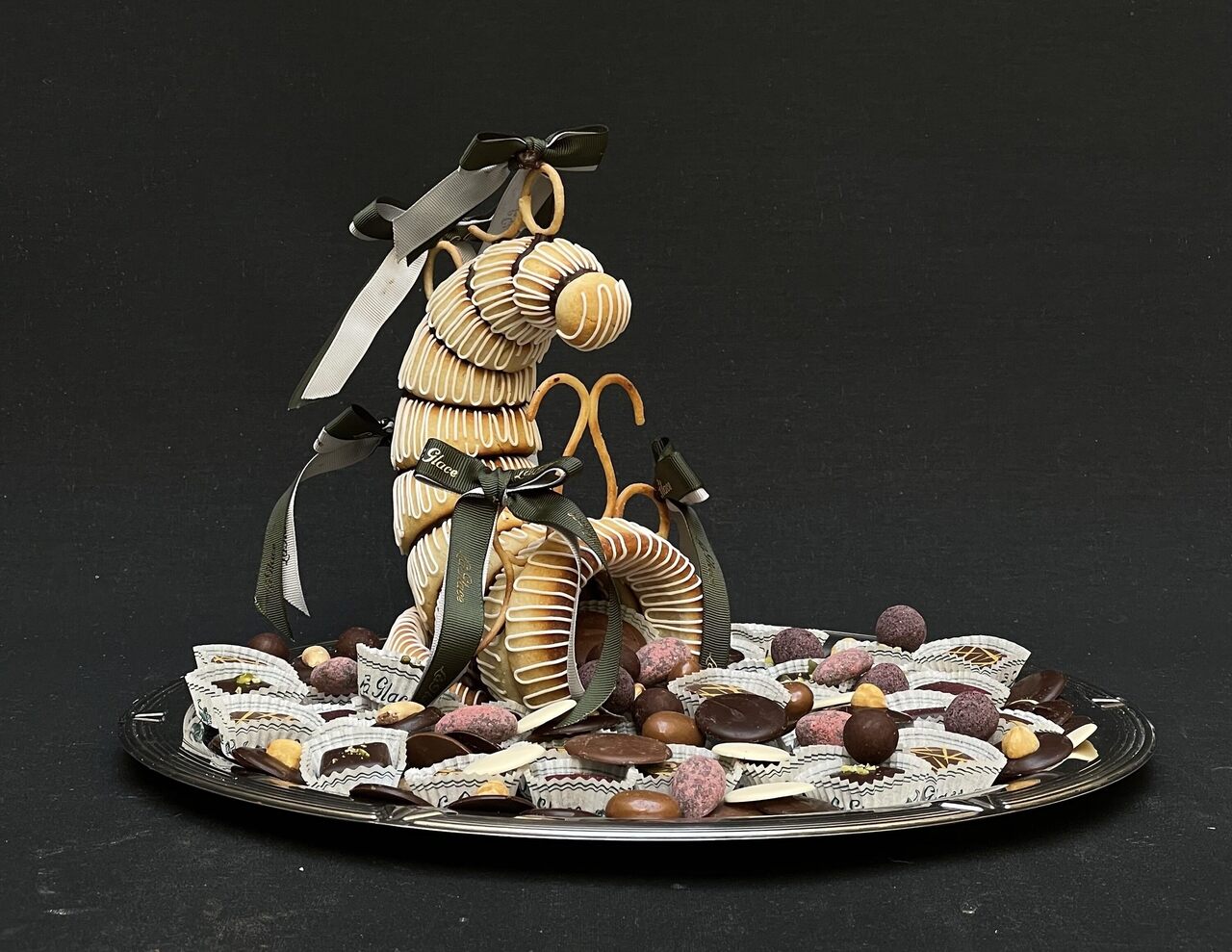 From the cavity of this florid horn emerges dozens of petit fours and chocolates in a bountiful display of plenty. Priya Mani
In This Story
Destination Guide

IN June 1967, the future Queen Margrethe II of Denmark raised many eyebrows when she refused to accept a classic wedding cake from a local baker’s guild. The young princess and her fiancé instead ordered two overflødighedshorn, the cakes that she proclaimed to be “truly Danish.”

Cornucopia-shaped cakes are baked the world over, usually around harvest-time. But the Danish cornucopia cake is more than an expensive celebratory cake; for many Danes, a major life event is incomplete without a serving of overflødighedshorn.

This unique marzipan cake has a deep cultural meaning. The name is a transliteration of Latin cornu copiae, meaning horn of plenty. In Greek mythology, Zeus snapped off the horn of Amalthea, the magical goat, causing a fountain of food to appear. Legend also had it that Hercules broke off one of the river god Achelous’s horns, which nymphs then filled with seasonal abundance. Meanwhile, in Norse mythology, the goddess Idun poured the elixir of immortality and youthfulness from a horn. All of this symbolism is captured in the form of the Danish overflødighedshorn.

But the cakes weren’t made in ancient times. Instead, marzipan cakes appeared in Denmark after almond paste arrived via Persia in the Middle Ages. Almonds were imported and expensive, making marzipan a status symbol. Food historian Gunvar Maria Juul translated a description for making marzipan cakes from Denmark’s oldest cookbook, published in 1616, as “a paste of peeled almonds, sugar and rose water … shaped and cooked in a copper pan between layers of embers.”

Marzipan cakes achieved their iconic design as Copenhagen’s bakeries became centers of creativity and extreme competition for royal favor. Bi Skaarup, the late food historian, noted that cornucopia-shaped marzipan cakes are a relatively modern invention, created by a Copenhagen baker in the late 1700s. Ever since, they’ve remained the epitome of a baker’s skills and a mark of the high class of his clientele.

Recently, I received an invitation to attend the baking of a grand overflødighedshorn at La Glace, a legendary Copenhagen institution founded in 1870. When I arrive at the bakery, owner Marianne Kolos points out that the two trumpet-shaped motifs adorning their logo are, in fact, overflødighedshorn.

Early mornings at La Glace are especially busy when there’s an enormous overflødighedshorn to bake, with employees working on the cake in relay to assemble it in time. It is so time-consuming to prepare that a celebratory cake for 80 people, consisting of just 28 rings of marzipan, can take up to 2 days. La Glace’s version is perhaps the country’s most expensive cake at 6800 Danish kroner, or a little over 1,000 USD.

For all the effort and money needed to make one cake, overflødighedshorn is made of just three ingredients—marzipan, egg whites, and sugar. Most Danes believe that locally produced almond marzipan is the main ingredient in an overflødighedshorn. And it’s true that the world’s largest producer of marzipan is a Danish company, Odense Marcipan A/S. But what most people do not know is that the baker’s choice for overflødighedshorn is Odense’s speciality product, Kranse XX, a paste made primarily of apricot kernels that’s only 15 percent almond.

The cake demands great skill and patience. Bakers form sweet nutty paste into rings, pop them in the oven until they’re golden brown, then carefully glue them together with chocolate to form a horn. The final exam to qualify as a baker in Denmark requires making an overflødighedshorn. “Basically everything else can be learned rather easily,” notes Kolos, but overflødighedshorn requires a certain flair.

Teis Jensen, the master baker at La Glace, works with the exactness of a goldsmith. “With patience and practice, my hand has learned the profile of the ring,” he says, weighing out marzipan for each circular section. “They must sit in a smooth transition, matching together. ” Making the overflødighedshorn’s iconic shape may seem disarmingly simple, but it’s all too easy to make a lumpy or unbalanced cornucopia.

Jensen freezes the rings prior to baking, making them as cold as possible. This creates a perfectly crisp crust in the oven, while keeping the rings moist inside. Then, he briefly bakes them. The complex noyaux scent of apricot kernels and almonds, at once bittersweet and nutty, floods the room. Nearly every baker I talk to emphasizes the thrill they feel when the rings emerge from the oven as perfect golden rounds. Even the slightest error prior to baking can result in lopsided rings, and when making a cake out of expensive marzipan, mistakes are costly.

Erik Ellitsgaard, president of the Copenhagen Baker’s Guild, notes that, in the past, caramel was often used to bind the rings. “This is very tricky,” he says. If the caramel sets too hard, eating the overflødighedshorn is an unpleasant experience. Too soft, and the whole sculpture risks falling apart. “Using chocolate to stick the pieces is a great innovation in the history of the overflødighedshorn,” he says proudly.

With its hefty price tag, the cake is always made to order at La Glace and a handful of other bakeries in Copenhagen. Nevertheless, it remains the pinnacle of old world tradition and rigorous handiwork, despite this era of stand mixers, silicone molds, and modernist cakes. The overflødighedshorn is still served at the Queen’s New Year’s Eve Ball, made by celebrity baker Morten Heiberg. Despite the royal patronage, it remains a rare treat, due to the effort and expense needed to make a single cake. So seeing an overflødighedshorn prepared and presented is a special experience all by itself. Yet, when it’s time to feast, the magnificent overflødighedshorn is cut like any other cake, into crumbly pieces.

This Jelly Cake Captures the Wonder of the Cosmos

Centrifuges and syringe-tipped knives are behind this edible miniature galaxy.
restaurants

An entire generation associated the beloved riff on Baked Alaska with teen romance and rebellion.
food

It was likely the country's first cake made with cacao.
More Food & Drink
Sæby, Denmark

The dishes at this restaurant by The Sioux Chef celebrate indigenous heritage.
Want to see fewer ads? Become a Member.
From Around the Web
THE GASTRO OBSCURA BOOK
Taste the World!
An eye-opening journey through the history, culture, and places of the culinary world. Order Now