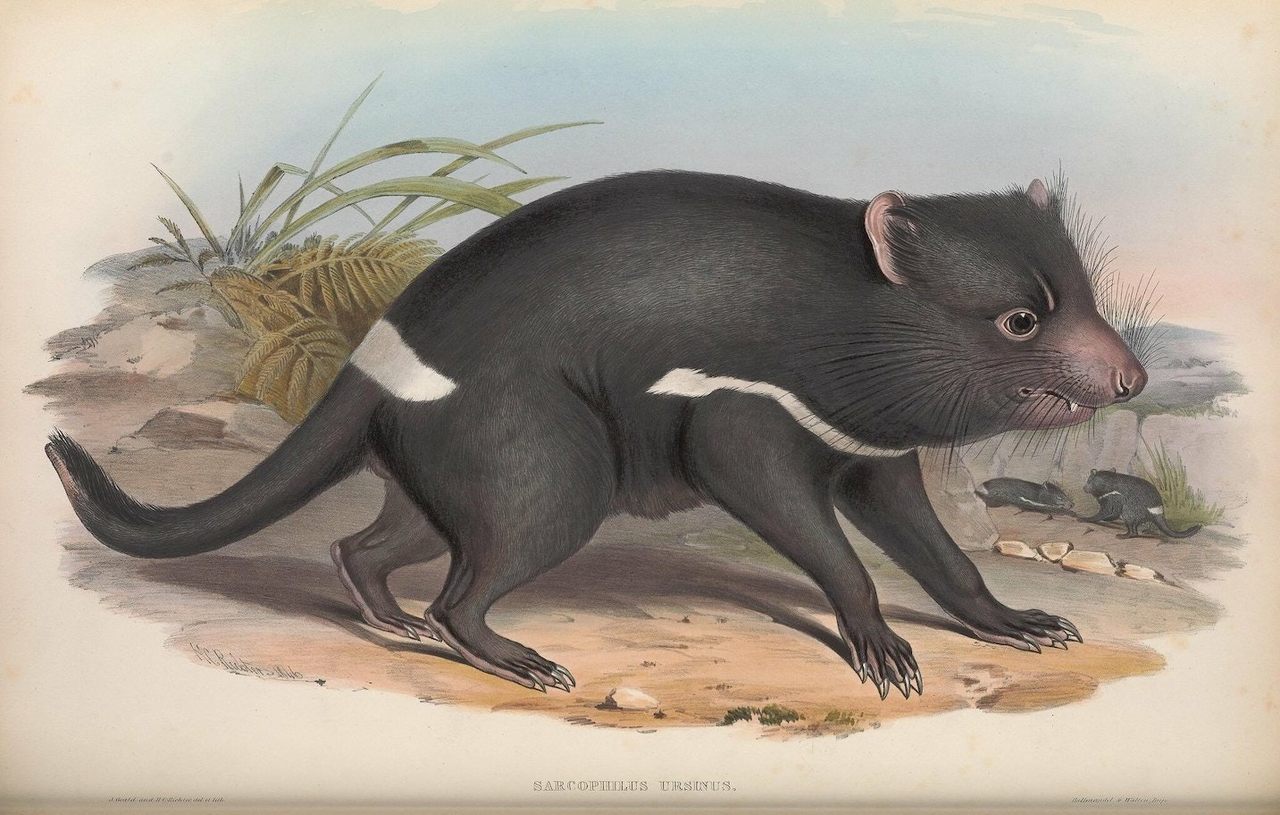 The Tasmanian devil, a talisman of Australian wildlife, was catalogued and illustrated by John and Elizabeth Gould in the mid-19th century, then rendered as a lithograph by H.C. Richter. All photos Smithsonian Libraries / Biodiversity Heritage Library / Flickr Commons / Public Domain
In This Story
Destination Guide

When John Gould and his wife, the artist Elizabeth Gould, first set foot in Australia, in 1838, they were ready to start something new. John Gould had spent the previous year helping Charles Darwin with his revolutionary work on evolution in the Galápagos Islands, off the coast of South America, naming and classifying Darwin’s finches and correcting the more famous naturalist on multiple counts of avian misidentification.

In Australia, the Goulds were to study, write about, incidentally eat, and lavishly illustrate birds. But on seeing the eclectic array of mammalian life on the continent, the couple couldn’t help themselves. They produced a three-volume work, Mammals of Australia, with lithographs by H.C. Richter, according to The Public Domain Review. Reminiscent of John James Audubon’s work, the Gould’s efforts put evolutionary theory to paper, with vivid depictions of life’s diverse manifestations.

“If the Birds of Australia had not received that degree of attention from the scientific ornithologist which their interested demanded,” Gould writes in the preface to his corpus on Australian mammals, “I can assert, without fear of contradiction, that its highly curious and interesting Mammals had been still less investigated.”

Despite the extreme diversity of creatures that inhabit Australia’s harsh environs, life on the continent is more fragile than meets the eye. From the bush to the Outback, Australia has always been home to a slew of bizarre creatures: During the last Ice Age, Mini Cooper–size marsupials clambered up trees to snack; today, large pink slugs thrive on one of the continent’s volcanoes.

But all life is susceptible to the upheavals of climate change, which has recently sparked bushfires that have obliterated animal life and habitats. Though charismatic creatures like the thylacine were eradicated by humans last century, other marsupials—and the larger category of Australian mammals—have persisted.

At least until now. The fires in the southeast of the continent have pushed many of those animals closer to the brink of extinction. (Gould called Australia the “great country of these pouched mammals,” speaking to the continent’s bevy of marsupials, which are otherwise sparsely represented on Earth.)

These 19th-century illustrations of Australian mammalian life offer a melancholic glimpse into the continent’s biodiversity as it was seen back then: replete with perplexing creatures with bizarre anatomies—inexplicable leaves on the evolutionary tree. Seen in 2020, these lithographs strike an eerie chord, envisioning life in a moment and environment now long gone—thanks to us.

The Joy of Collecting Stamps From Countries That Don't Really Exist

A new member of the family.
art

Our Favorite Illustrations of the Mysteries, Histories, and Heroines of 2022

Bringing a visual spark to some of our most unusual stories of the year.
science