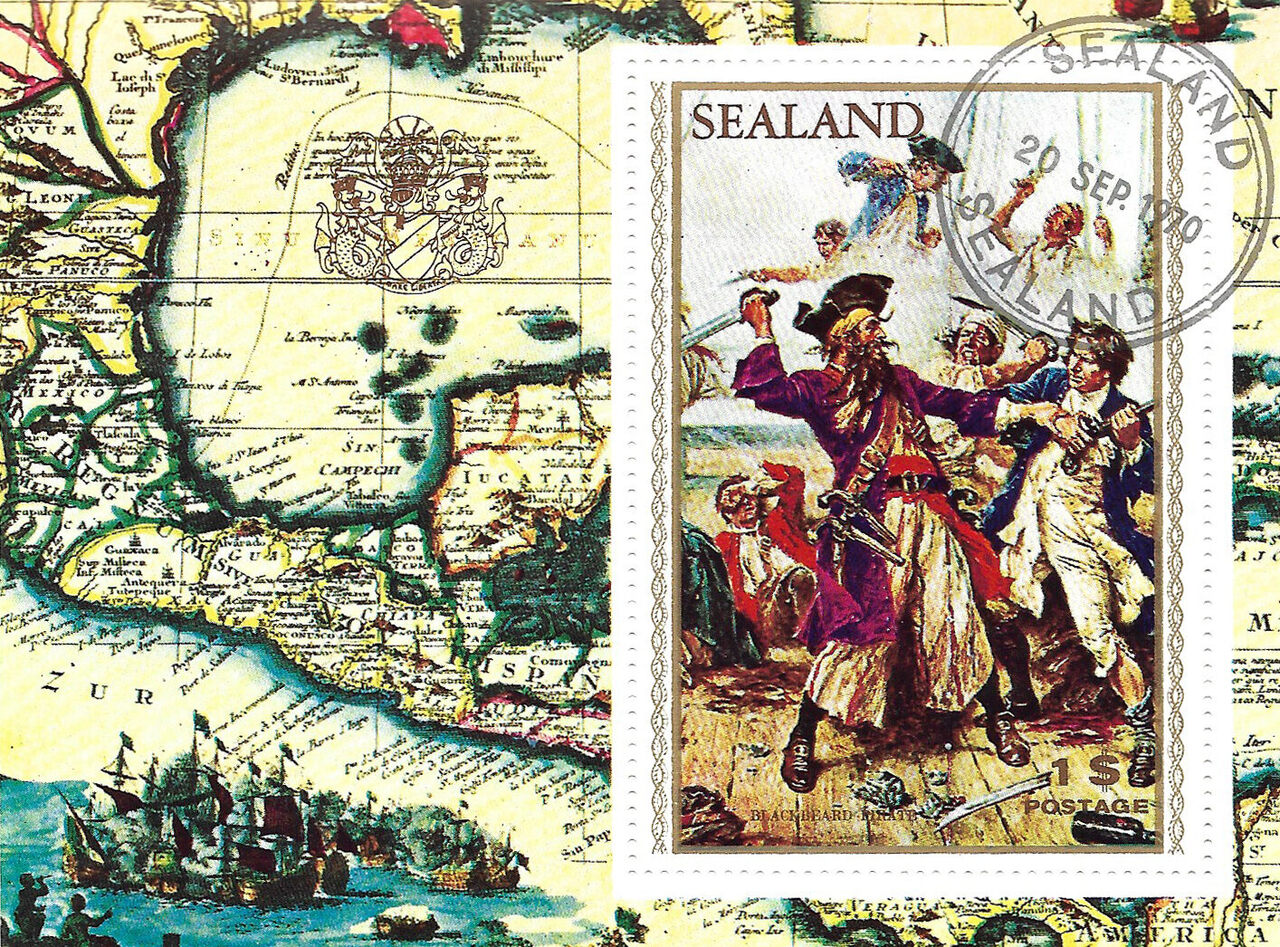 Sealand is perhaps the best known and most persistent micronation. It was created, first as a pirate radio station, and then as a state, by Paddy Roy Bates. Courtesy Laura Steward
In This Story
Place

The Republic of Molossia

The smallest country in the world.
Place

A 550-square-meter micro-nation off the coast of Britain.
Place

A micronation of epic proportions.

The postage stamp looks like a postage stamp is supposed to look: white, perforated edges, and part of a circular cancellation mark in the corner. It also has the country and postage clearly printed, though its depiction of the pirate Blackbeard during an attack might be more dramatic than most philatelic subjects. But it’s not a postage stamp, not really, because its country of origin is Sealand—a metal platform about the size of a tennis court, off the English coast. Sealand is one of the quirky, strangely numerous states known as “micronations,” or self-proclaimed polities with no legal recognition. Some of them, to simulate legitimacy or at least make a little money, have issued their own flags, passports, coins, and yes, postage stamps.

Laura Steward, curator of public art at the University of Chicago, who organized an exhibition at the 2020 Outsider Art Fair in New York of stamps from micronations and other dubiously defined places, believes that these tiny squares are more than a toss-off: They’re art, proof of imagination, and rather sophisticated bids for public recognition. “A postage stamp is a small but mighty symbolic emissary from one particular nation to the rest of the world,” Steward writes in text accompanying the exhibit. “A functioning postal service, made visible in stamps, is an unmistakable expression of national legitimacy…. As a result, the postage stamp is an excellent vehicle for spurious, tenuous, or completely fictitious states to declare their existence.”

Steward, who’s a stamp collector herself, refers to these types of stamps as “Bogus Cinderellas.” They are “bogus” because they don’t represent officially recognized entities, and “Cinderellas” because they are stepchildren to genuine postage. “Most serious stamp collectors consider them illegitimate despite their extraordinary ability to conjure an entire nation on a tiny piece of paper,” Steward wrote. Some collectors are fascinated by them nonetheless, and so micronations (and other not-quite-places) keep putting them out. The Republic of Molossia issued some as recently as 2019.

Atlas Obscura spoke with Steward about the wonders of discovering and collecting stamps from these rather curious, suspect places.

What was your first encounter with tanglible “proof” of a micronation?

I was working on an exhibition of unusual forms of currencies in support of a scientific conference, and came across Sealand’s currency, and then Sealand itself.

Why would a micronation go through the trouble of making stamps if they’re no good for postage?

Stamps are routinely used to reify state power. If your state’s existence is rather tenuous, making a stamp is a gesture of legitimacy and seriousness. It is an opportunity to visualize your state’s identity and share that with others.

Tell us about your favorite bogus Cinderella.

My favorite stamps are from Heliotown, which is more like an art project than a micronation. It is easiest to think of Heliotown as a parallel reality, and there are two “portals” to it in Santa Fe, New Mexico—one downtown, one at the Santa Fe Institute, the independent research institute that created it.

What’s the micronation stamp with the most interesting story?

I’m drawn to Celestia, the Nation of Celestial Space. James Thomas Magnan, founder of Celestia, registered the acquisition of “outer space” with the Recorder of Deeds and Titles in Cook County, Illinois, on January 1, 1949. Magnan laid claim to outer space to prevent any one country from establishing hegemony there. Later in 1949, he banned all atmospheric nuclear tests, and notified the United Nations of his decision.

What’s the allure of these stamps for collectors?

For me, the appeal of the stamps is their ability to stand for the political culture of an entire nation in just one square inch. And I love to think about micronations—the boldness of the project, the many decisions that must be made to invent an entire nation and culture out of nothing. And to then express such a vast project in such a tiny form is something I find enchanting to think about it. I love the handmade qualities of many stamps, which show us the character of their makers.

For Sale: Fancy Canceled Stamps That Recorded Daily Life in a Connecticut Town

It changes from an eclipse to a moon when touched.
stamps

The Subversive World of 'Cinderella Stamps'

These tiny artworks can't be used for postage, but they do send a message.
Video