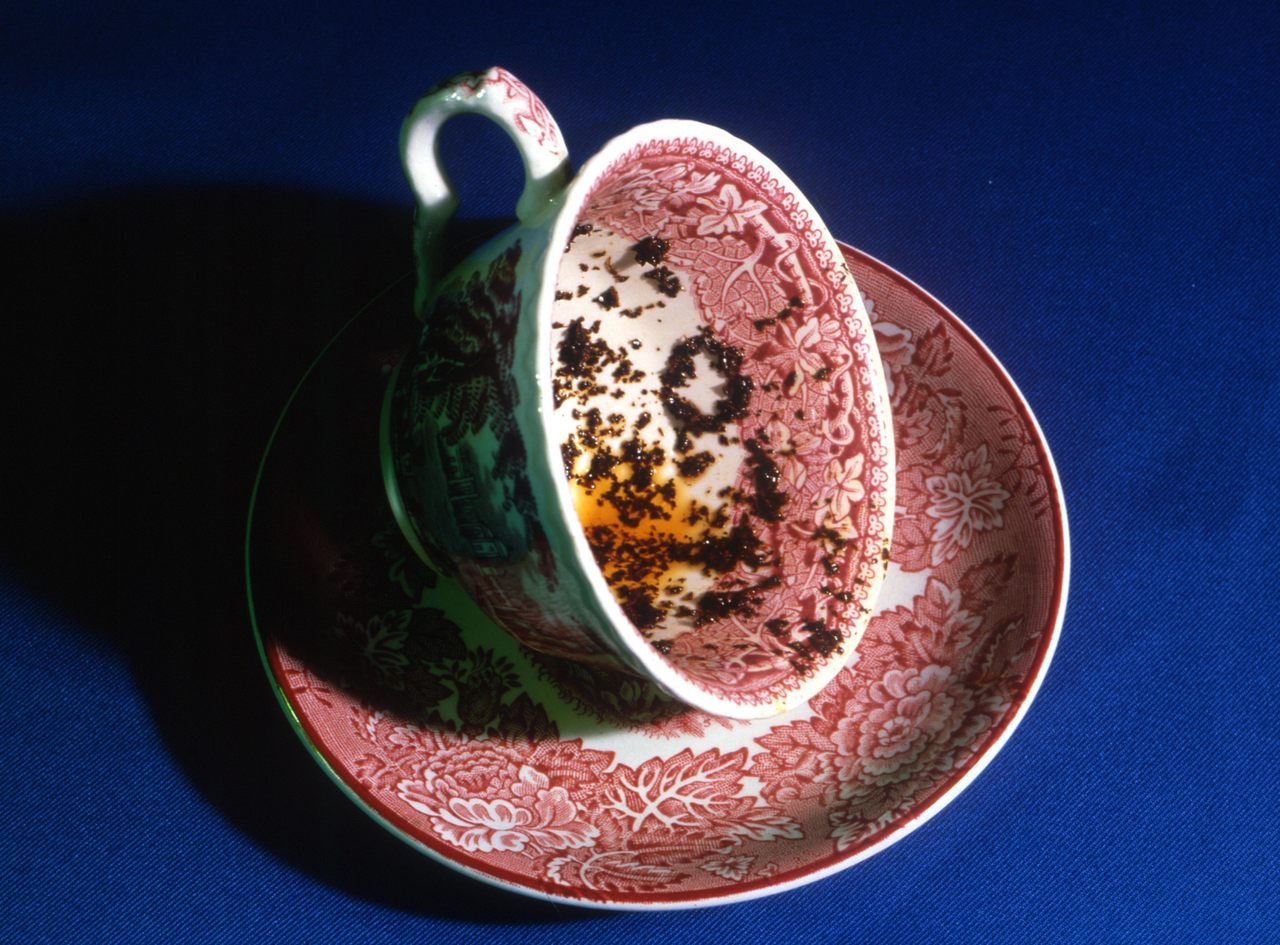 THIS ARTICLE IS ADAPTED FROM THE OCTOBER 15, 2022, EDITION OF GASTRO OBSCURA’S FAVORITE THINGS NEWSLETTER. YOU CAN SIGN UP HERE.

Long before anyone had Co–Star on their phones, people still wanted to peer into the future. “They didn’t have tarot cards or crystals. They would use whatever was available for them,” says Peter Muise, author of Witches and Warlocks of Massachusetts. In most cases, that meant one thing: food. In premodern Scotland, England, and North America, “there’s a lot of magic with apples, nuts, eggs, and cabbages, because that’s what people had around the house.”

In some cases, these fortune-telling methods were deadly serious; in others, they were more of a light-hearted party game for Halloween gatherings. And while they may have fallen out of fashion, they’re generally pretty easy to do, provided you have a stocked pantry and a little imagination. Here are a few to try this spooky season.

Curious though it may sound to us now, American Halloween used to kick off with a mass theft of brassicas. “An old name for the night before Halloween is ‘Cabbage Night,’ because you would steal cabbage,” Muise says. “Stealing the cabbage was part of the Halloween prank. The trick would be one night and the treat would be the next night.”

It’s not entirely how widely this cabbage thievery was practiced, although several accounts point to Massachusetts and New Jersey. In all likelihood, it stems from the Scottish tradition of “kaling,” which involved wandering blindfolded into a field of kale around midnight, right around the time the barrier between the worlds of the living and the dead grows thin. The blindfolded participant would yank up the first available bunch of leaves, then analyze the stalk for clues about their future romantic partner.

Robert Burns’s 1785 poem “Hallowe’en” describes two teenagers heading off to the field for some kaling and losing their virginity in the process (an ideal premise for an off-kilter slasher film, if ever there was one).

What exactly can kale tell you about your boo-to-be? In A Halloween Wraith, William Black wrote, “Maybe you would rather pull a stock that was tall and straight and strong.” Or, he adds, that you “had got hold of a withered old stump with a lot of earth at the root,” implying “a decrepit old man with plenty of money in the bank.””

How to Practice it: Maybe don’t? Even on the off-chance that you live near a kale or cabbage farm, Gastro Obscura can’t condone the stealing of vegetables. Instead, you could try making colcannon, the hearty Irish mash of potatoes and kale often served around Halloween. Cooks in 16th-century Ireland would sneak a little secret ingredient into this humble staple. If one of the diners pulled out a ring, it meant they would soon be married, while a thimble meant they would wait a while, and a coin implied impending wealth.

Whether you call it oomancy, oomantia, or ovomancy, eggs have been used to glean knowledge about unborn children, unfound spouses, and impending deaths since ancient Greece. In ancient Rome, Empress Livia Drusilla incubated an egg between her breasts in the hope that the chick’s sex would predict that of her unborn child. One Ozark superstition later held that if a girl hollowed out a hard-boiled egg, filled it with salt, and ate it, she’d dream of her beloved-to-be bringing her a much-needed pail of water.

The most common method of oomancy is surprisingly simple. During the hysteria surrounding the Salem Witch Trials, ministers issued dire warnings against using a “Venus glass”—essentially, just egg whites in a glass of warm water.

How to Practice It: To make your very own “Venus glass,” just pour hot water into a glass, puncture an eggshell with a needle, then drop the egg in the water. As the egg white solidifies, try to decipher what the resulting shapes resemble.

Around the 1920s and ‘30s, fortune-tellers with tea leaves and crystal balls in American cities had become a common sight. In New York City, these seers were forbidden from accepting payment. The local police force was so bent on catching them plying their trade that they organized sting operations of teahouses.

Today, tasseography is once again seen as harmless and one of the easier methods for would-be fortune-tellers to get into the game. Like oomancy, it hinges on your ability to interpret the shapes at the bottom of your cup.

How to Practice It: Make a cup of strong loose-leaf tea without milk, concentrating hard on your question all the while. When you’ve drunk most of it, swirl the dregs clockwise three times, pour them onto the saucer, and see what you can make of it. If you’re looking for a little help, you could always up your game with specialty cups made for tasseography.

In addition to kale thievery, Burns writes about another fortune-telling practice in his poem “Hallowe’en.” The old goodwife’s well-hoarded nuts, Are round and round divided, And many lads’ and lasses’ fates, Are there that night decided.

One popular method was to take two chestnuts and roast them side-by-side in the fire; if they stayed in place without rolling away, it was a good omen for a happy marriage. Alternatively, you could take a hazelnut, representing your lover, and throw it into the fire. If it burst into flame, it was a sign of trouble to come.

How to Practice It: Stick to throwing nuts in the fire from a safe distance—unless you fancy risking singed fingers with another Victorian party game. In snapdragon, participants try to extract nuts and dried fruits from a plate of flaming brandy (I’ve tried it and, yes, it’s terrifying.) Usually, this questionable feat of bravery was performed closer to Christmas and New Years, when fortune-telling games and ghost stories were common ways to pass the long, dark evenings.

Thrusting your face into a barrel of water in an attempt to bite a slippery, moving apple in front of your peers seems like a recipe for public humiliation. It turns out that the stakes in bobbing for apples used to be a whole lot higher: In 19th-century England, this party game had all sorts of elaborate variations designed to show who your future spouse might be.

The spiciest version involved writing down the names of all the party guests on the apples before diving in open-mouthed. Whichever apple you managed to snag represented who you were going to marry. Despite the risk of some ensuing social awkwardness, it’s a whole lot better than another Halloween game from the era. In “snap apple,” participants lunge at spinning apples suspended from the ceiling with flaming candles in them.

How to Try It: If bobbing for apples isn’t your thing, try removing an apple peel in one piece and tossing it over your shoulder. Whatever shape it forms represents your lover’s initial.

Cromniomancy, or the practice of onion divination, isn’t the fastest way to get otherworldly answers, but it has been in practice for centuries. If a woman is struggling to choose between suitors, all she has to do is carve their names onto two different onions, then pick the potential mate whose designated onion sprouts first.

In Germany, a tradition for New Year’s Eve, or Silvester, is to make a Zwiebelkalender, literally, an “onion calendar.” Gustav Jungbauer described it in 1927: simply set out 12 pieces of onion, one for each month, and sprinkle them with salt. The amount of moisture that appears indicates the amount of rainfall in its corresponding month.

How to Practice It: If you find yourself caught in a love triangle, it can’t hurt to grab a pair of onions and see what sprouts. No need to plant the onions: after carving, leave them in a cool dry place to await the green shoots.

Only You Can Prevent Sad Pumpkins

From ancient Greece to the Salem Witch Trials.
witchcraft

Can a "dumb cake" help you discover your fate?
Video