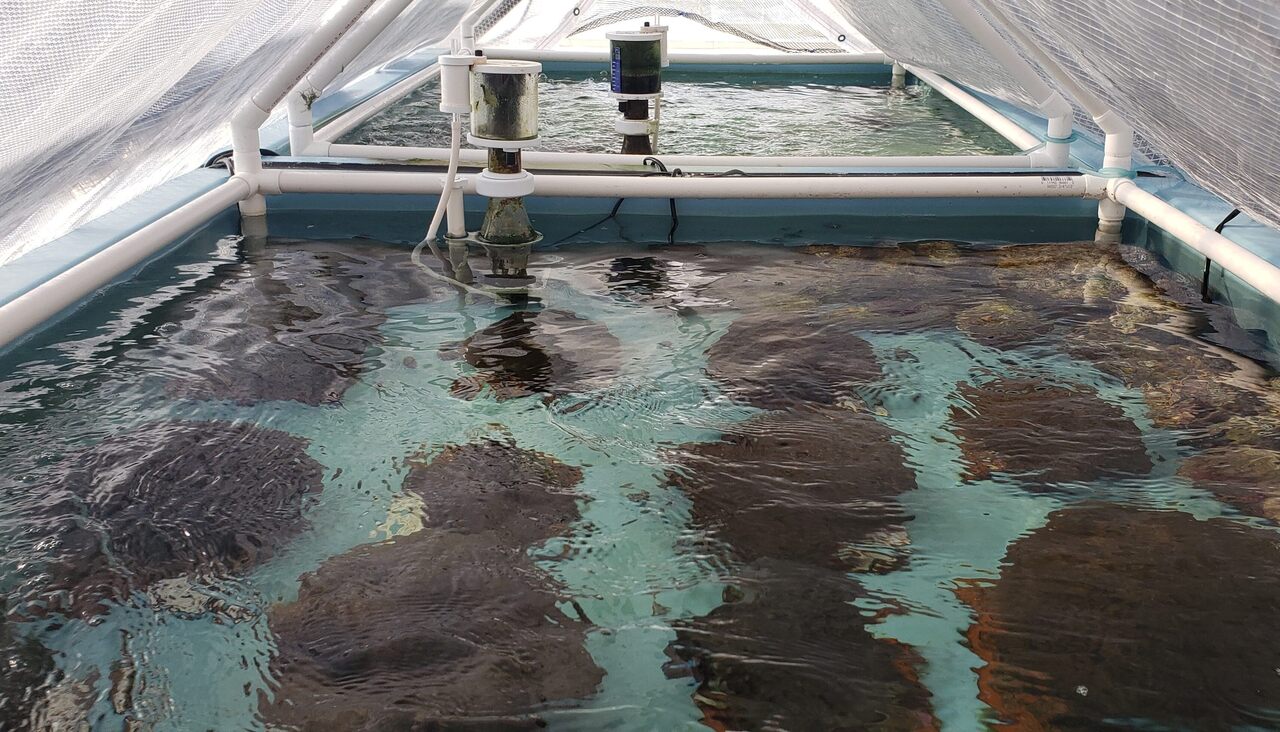 Welcome to a thoroughly 21st-century ark. Kyle Pisano
In This Story
Destination Guide

Long ago, according to the Bible, an ark saved all land animals from extinction as the world was engulfed by a punishing flood. Today, in Fort Lauderdale, Florida, a new ark is aiming to give Noah’s a run for its money. Sure, the oceans are rising, but this ark is more concerned with denizens of the sea than those on land: 22 species of stony corals, which take on a menagerie of shapes, from squat and bulbous to plant-like and branching. The Coral Rescue Project’s ark, operated by Nova Southeastern University (NSU), is part of a much larger project to save Caribbean corals from a mysterious disease that turns lush reefs into bleach-white skeletons.

Passengers on one of the berg-like cruise ships docked in Fort Lauderdale might look inland and see what appears to be just another flashy South Florida condo, but the modern building they’re seeing is actually NSU’s glossy new Oceanographic Center. “It’s nice here now,” says Abby Renegar, who manages coral conservation at the center. “But in the summer, we call it ‘Hell’s front porch.’”

Inside the center—all seafoam walls peppered with vivid paintings of sea life, including one of a sawfish slicing through a school of jacks above the security desk. The art is by Guy Harvey, wildlife artist and conservationist-cum-philanthropist whose name is emblazoned on the building’s exterior in bright blue paint. Renegar and I stop at her lab, where we pick up Kyle Pisano, a graduate student and NSU’s self-described “coral nanny.” He gathers his rolling cart of caretaking supplies—some tubing, tanks, and pipettes—and we head out back.

The ark, well, arks, are a series of table-sized tanks with pitched roofs, resembling a line of longhouses, each elevated above an extensively engineered filtration system. I ask Pisano if the salt water in the tanks comes from the ocean—an inlet is just yards away—and he laughs. It’s way too dirty from ship traffic, so he makes his own seawater in the temperature-controlled tanks. Each tank represents corals collected at a specific place and specific time, so no healthy corals get infected by newcomers that might carry the mysterious disease that is causing the bleaching.

“We don’t actually know when the disease started,” says Lisa Gregg, coleader of the Coral Rescue Project and a program coordinator for the Florida Fish and Wildlife Conservation Commission. Stony coral tissue loss disease, it’s called, first appeared off Virginia Key in Miami-Dade County in 2014, when divers noticed patches of white skeleton peeking out from among coral polyps. In the waters off Hollywood, Florida, a colony of mountainous star coral older than the United States and nicknamed “Big Momma” died within three or four months of contracting the disease, according to the National Oceanic and Atmospheric Administration (NOAA), which manages the Florida Keys National Marine Sanctuary. Over the next few years, the disease crept north to Pompano Beach, Palm Beach County, as far as the St. Lucie Inlet, as well as south, into the Florida Keys, and then out, from Belize across the Caribbean to St. Thomas. As of this winter, the disease has been reported in St. John, Puerto Rico, and the Bahamas. “There’s no rhyme or reason that we can discern right now,” Gregg says. “We thought warm waters would increase the spread of the disease, but it hasn’t happened that way.”

Even before the disease hit, Florida’s reefs were in bad shape, battered by things as mundane as wayward anchors and the bleaching caused by climate change. So NOAA, the National Park Service, and the state’s Fish and Wildlife Conservation Commission and Department of Environmental Protection joined to assemble nine teams—each tackling a different angle of the coral crisis. One team, the Coral Rescue Project, began collecting healthy specimens from parts of the reef with no sign of disease. Divers carved out pieces of corals with hammer and chisel and then took them back to the ark at NSU, where each received a dip in an antibiotic solution before going into their designated tanks.

The project has collected 1,747 colonies since 2018, focusing on 22 species—16 high priority and six medium priority—that are most severely affected by the disease. Among these are the spectacular, endangered staghorn and elkhorn corals. “We’re gene-banking the corals,” Gregg says, adding that the team aims to collect corals across a wide geographical range to ensure genetic diversity. “We’re trying to collect everything ahead of the disease front, but we’re running out of space.”

Though NSU’s ark offers these individual colonies safe haven, it doesn’t represent a permanent home. The goal is to eventually return these colonies to the reef, once scientists have developed a way to combat the tissue loss disease. But no one knows how long that will take, and NSU’s facility isn’t on the scale of the Biblical ark (about half the length of Titanic, according to the Old Testament). In November 2018, the Coral Rescue Project approached the nonprofit Association of Zoos & Aquariums (AZA) to see if their institutions might provide more coral lodging space. Within a month the AZA had hired a full-time employee to oversee its end of the project.

“It was a no-brainer when they asked us to partner with them,” says Beth Firchau, the Florida Reef Tract Rescue coordinator for the AZA. Firchau left a job at the Audubon Aquarium of the Americas in New Orleans to join the coral rescue effort.“Public aquariums and zoos have been doing conservation for hundreds of years,” she says. “It’s all about cracking the nut of what it takes to keep these particular species, which are already in trouble, healthy and happy.” Currently, 18 zoos and aquariums from across the country are holding Florida corals, and Firchau expects that number to grow.

Even facilities with a history of taking care of coral faced a steep learning curve with the Florida colonies, which have historically been underrepresented in many aquariums. “They’re not the corals we normally keep,” says Barrett Christie, the director of husbandry at the Maritime Aquarium in Norwalk, Connecticut. This is, aesthetically speaking, Florida corals’ own fault. “We tend to gravitate toward Indo-Pacific corals, which come in every color of the rainbow,” he says. “Florida corals are very beautiful but not as striking. They mostly come in blue, green, and yellow.”

The Maritime Aquarium’s Florida corals, which inhabit a tank that used to belong to a rescued sea turtle, are relatively high maintenance. Christie says the colonial animals are more sensitive to light than other kinds of corals, and also have certain, unprecedented demands. “We had no idea how much these corals can eat, and the size of the shrimp these corals can pack away,” he says, adding that he had to revise the team’s 2020 food budgets based on how much they were consuming. Christie even hand-feeds them. “We use a very highly technical device,” he says. “It’s called a turkey baster.”

At the National Mississippi River Museum & Aquarium in Dubuque, Iowa, the coral caretakers grappled with another unexpected obstacle: certain corals were bullying each other. “Some corals are kind of crazy and have tentacles that can sting,” says Marisa Foster, who cares for the museum’s Florida corals. One species in particular, Meandrina meandrites, also known as maze coral, boasts tentacles that can reach out as far as six inches—and sting other species nearby. It’s how some corals have adapted to protect themselves and stake out territory. “They’ll have chemical warfare trying to poison other corals,” she says. “We had to house them appropriately so they aren’t just picking on each other.”

The Coral Rescue Project’s original goal was to collect 5,000 colonies, but with the disease advancing relentlessly throughout the Caribbean, it might already be too late. In waters by St. Thomas in the U.S. Virgin Islands, researchers have begun removing diseased corals in an attempt to save the reefs, according to Reuters. “We’re running out of areas to collect from, and at some point we’re going to have to start thinking about doing collections from the corals in the endemic zone,” or the areas where the infection has begun to take hold, Gregg says. The colonies currently housed NSU’s ark probably represent the last batch of certifiably healthy Florida corals, Pisano says. As they’re shipped out to new, temporary homes across the country, Gregg and Pisano will begin to replace them with corals taken from less-healthy sections of reef—and the scientists may have no choice but to watch them die in the tanks. But with an entire ecosystem at risk of collapse, they might have to, in the hope that they can provide refuge to a few more healthy colonies.

In the Great Lakes region, what some consider a weed is actually a sacred seed.
reefsscientists at workcoral reefsdiseaseconservationoceans
Keep Exploring
coral reefs

The Staggering Scope of the Plastic Threat to Coral Reefs

Garbage floating in the ocean is likely to be swarming with bacteria, which can make corals sick.
science

An online video raised a strange question: Do whale sharks make sounds? And would it matter if they did?
oceans

The Fight to Resurrect the U.K.'s Underwater Meadows of Seagrass

Seagrass captures carbon and creates marine habitat—so scientists are bringing it back.
Video • Object of Intrigue

"If you build it, they will come."
Read more
Thanks for sharing!