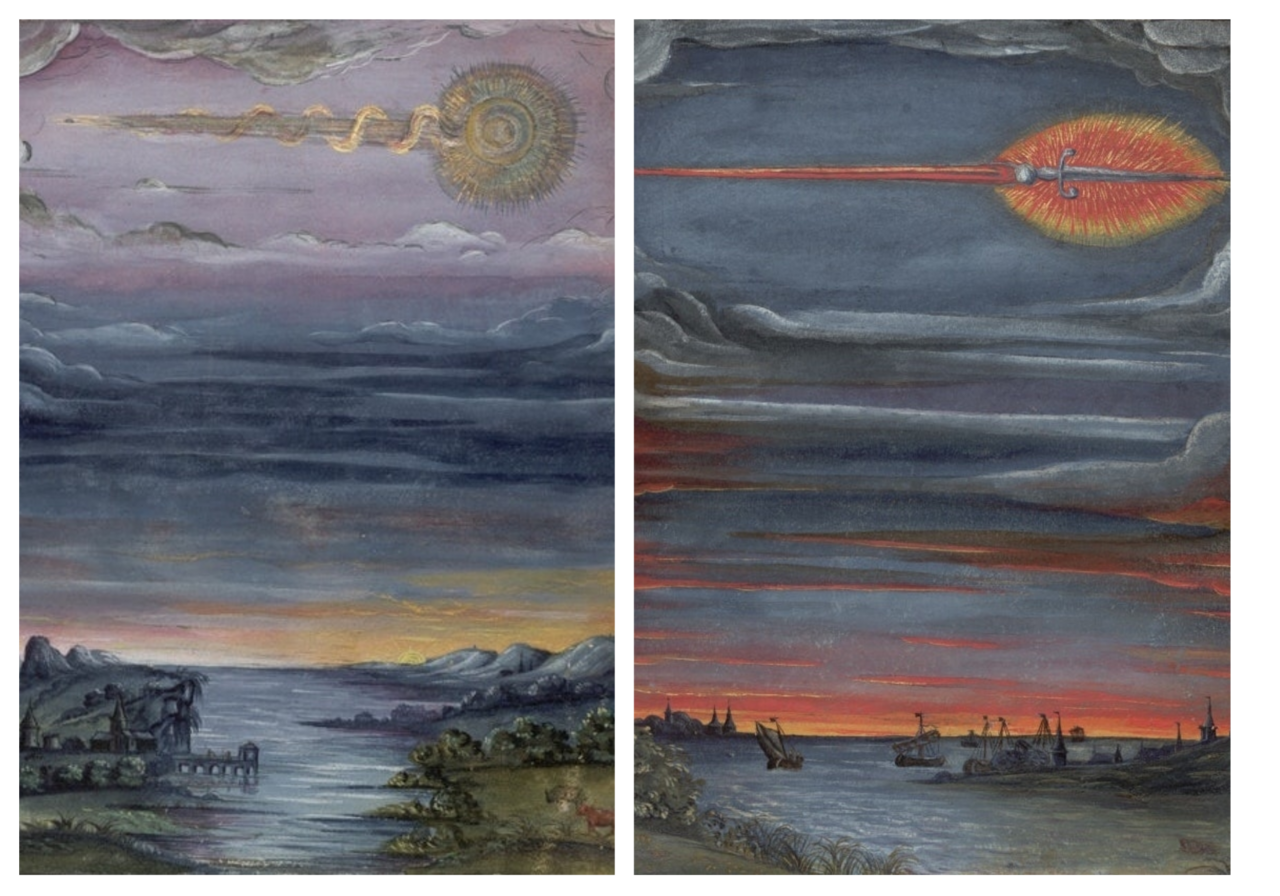 Humans have long regarded comets with a swirling mix of wonder and fear: The cosmic characters figure on Babylonian tablets and a sprawling, 11th-century European tapestry. Before scientists knew exactly what caused these bright smears across the sky, comets were often interpreted as portents of doom or destruction. (Occasionally, they were blamed for less-dramatic shenanigans, such as inspiring chickens to lay oddly shaped eggs.) Given their rich history, it makes sense that an unknown artist in 16th-century Flanders compiled a lavishly illustrated compendium of comets blazing as humans cowered or gawked.

The French-language manuscript, which now resides at the Universitätsbibliothek Kassel in Germany, is colloquially known as The Comet Book. As the Public Domain Review points out, the book is preoccupied with symbolism and significance over science; its full title translates to Comets and Their General and Particular Meanings, According to Ptolemy, Albumasar, Haly, Aliquind and Other Astrologers. The Comet Book leans heavily on folklore about the objects’ supposed consequences, from fires to famines.

Today, we know that comets are essentially ‘dirty snowballs.’ They’re made up of frozen clumps of gas, dust, and rock that are billions of years old, remnants of the early days of our solar system. As these cold, sediment-studded masses hurtle closer to the Sun, they warm—and then fling that no-longer-so-icy material behind them in bright, smudged “tails” that can wag millions of miles across the sky.

But none of that was known when The Comet Book was created. This volume, the Public Domain Review notes, drew on an abridged, 15th-century version of a 13th-century treatise, originally written in Spain. Long before telescopes helped bring the heavens into focus, the artist of The Comet Book depicted comets in ways that emphasized the feelings of fear or awe that they stoked. One is drawn as a sharp blade; another appears to be a sun or a blisteringly hot sunflower, petals flapping cheerfully in the wind. In some images, the sky and ground are flecked with billowing flames, suggesting that the comet was seen as a harbinger of disaster.

Here, Atlas Obscura has compiled some of the remarkable images from The Comet Book. Once you’ve surveyed these historic offerings, check out some contemporary counterparts—photographs of the comet known as C/2020 F8 (SWAN)—that lit up the sky in April and May 2020.

How to Appreciate Saturn as Abstract Art

In an image captured by Cassini, the gas giant's rings look like razor-thin blades.
astronomy

Who Keeps Track of All the Craters on the Moon?

For generations, women have been critical to bringing order to the chaos of the solar system.
libraries

A new global census doubles the number of known copies of the scientist's treatise on gravity and more.
paintings

The Mystery of a Medieval Blue Ink Has Been Solved

Turns out it was hiding in plain sight by the side of a Portuguese road.
Video • AO Docs

2:41
Want to see fewer ads? Become a Member.
From Around the Web
Related

What have we learned about the cosmos over the past 60 years?
Read more
Thanks for sharing!