The world's largest drain sits below the city of Kasukabe, Japan.
Place

Deep under Manhattan is the largest construction project in city history. So far, the project has taken the lives of 23 workers, or "a man a mile."
Permanently Closed
Place

There’s an age old adage that says you’re never more than six feet away from a rat in any urban setting. What people aren’t so aware of is exactly where those rodents may be hiding. In the case of many towns and cities the world over, the streets we walk along are as little as six feet above some truly amazing and ingenious tunnel systems. Some are still in use, some have strange histories, and the very existence of some remains a mystery. 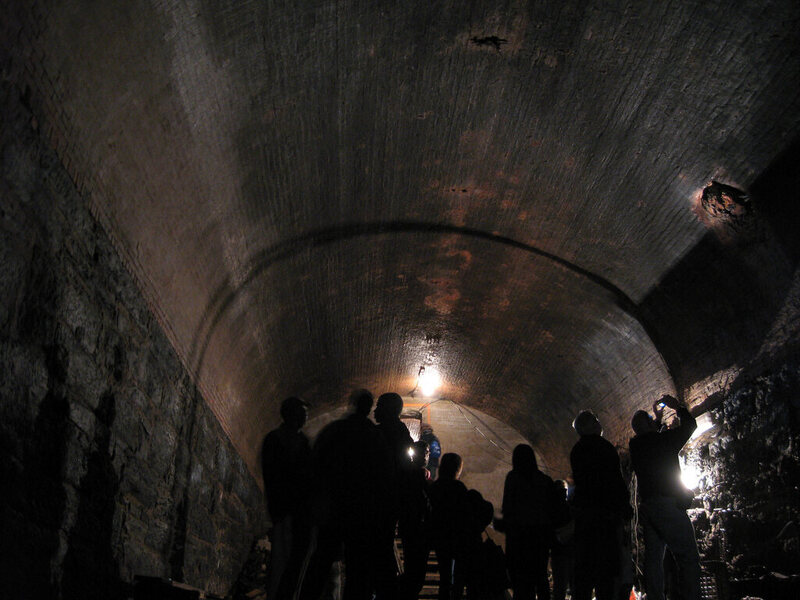 Built in 1844 under the direction of Commodore Cornelius Vanderbilt, this 2,517 foot (767 meter) excavation is the oldest underground railway tunnel in North America and, some claim, the world’s oldest subway tunnel (although it had no station of its own). Prior to the Atlantic Avenue Tunnel being built, train carriages had to be pulled by horses from one terminus along Atlantic Street to the next station where they were re-coupled to steam locomotives. Useful though it was, the tunnel’s working life was a short one, and in 1861 its entrances were sealed.

Having passed into the realm of folklore, the tunnel was rediscovered in 1981 by a young man named Bob Diamond. After entering via a manhole on Atlantic Avenue and Court Street, Bob crawled along a narrow passageway for 70 feet (21 meters) to locate the bulkhead wall that sealed off the main portion of the tunnel. He then enlisted the help of a Brooklyn Union Gas Company engineering crew to break through the wall and reopen the tunnel.

Diamond went on to conduct guided tours of the tunnel for several years. Recently however, New York City Department of Transportion decided to ban all such events and have closed the tunnel until 2018. 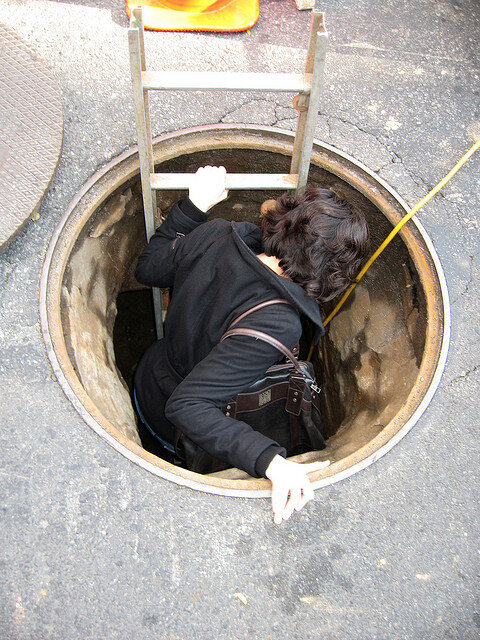 In the Atlantic Avenue Tunnel (photograph by Matt Baume/Flickr user) 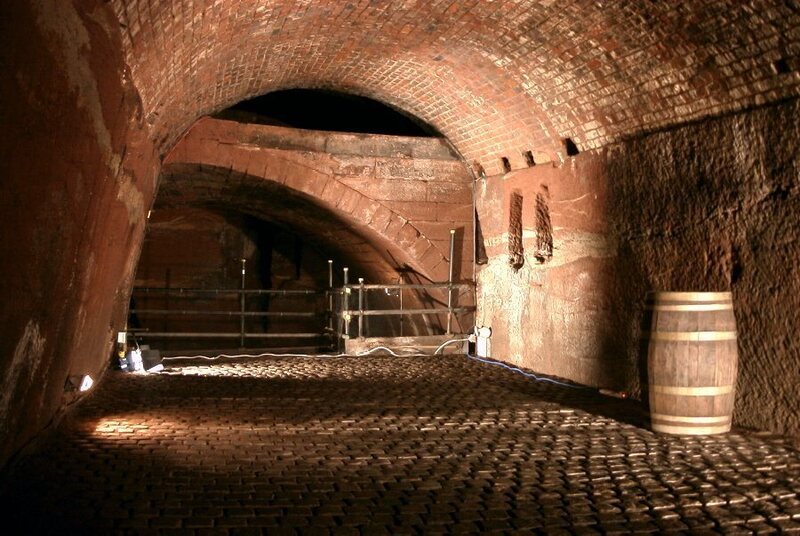 The Williamson Tunnels (via weekendnotes.co.uk)

During the early 1800s, wealthy Liverpool businessman Joseph Williamson employed a workforce of thousands to carve out a vast, uncharted labyrinth of tunnels beneath the city. The purpose of the Williamson Tunnels remains a mystery — some suggest philanthropy, while others say Williamson was a cultist preparing a safe haven for the coming apocalypse. Sealed when Williamson died in 1840, the tunnels were tapped into from above and used as an immense pit into which the household refuse of the city was tipped for over a century.

Today at The Williamson Tunnels Heritage Centre in the Old Stable Yard on Smithdown Lane, visitors can take a guided tour through a section of tunnels cleared over the last 25 years by volunteers from the Joseph Williamson Society and the Friends of Williamson’s Tunnels. The majority of the brick-lined warren still remains unexcavated and unexplored. 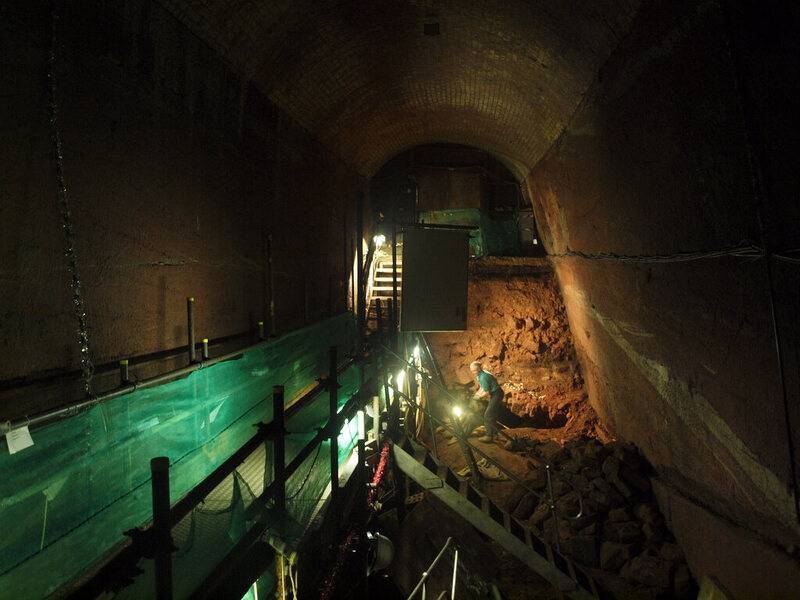 Inside the Williamson Tunnels (photograph by Adrian Hon/Flickr user)

Construction on New York’s six billion dollar, 60 mile (97 kilometer) Tunnel Number 3 was authorized in 1954, began in 1970, and is not expected to end until 2020. Designed to provide New York City with a third connection to the Upstate New York water supply, the finished tunnel will extend across the city from Yonkers through Central Park, the East River, and Roosevelt Island, finally ending in Astoria, Queens.

Since work began, 23 workers have lost their lives, giving the tunnel the eerie reputation of killing a “man a mile.” Inside the tunnel construction (via NYC DEP) 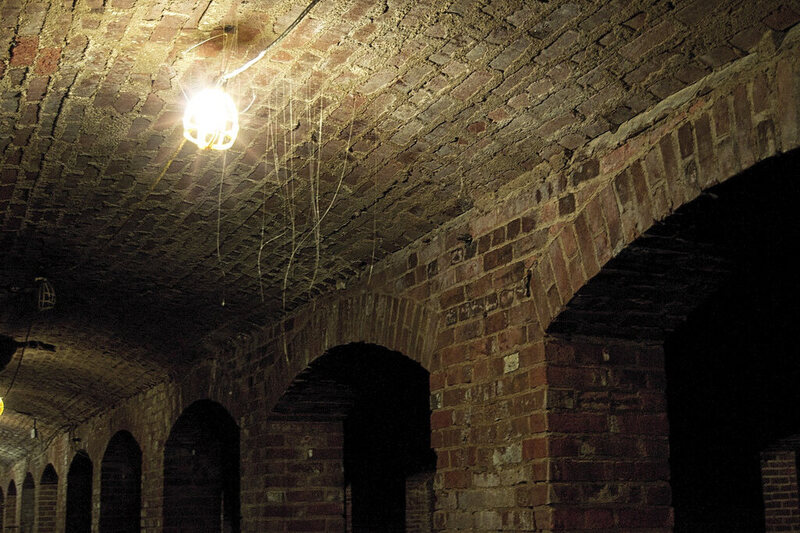 Beneath Indianapolis’ historic City Market lies a hidden 20,000 square foot (1,858 square meter) maze of passageways. Built in the 1880s, the impressive vaulted Market Street Catacombs were constructed as a pre-refrigeration means of preserving the meat and other foods overnight, so that they would remain fresh enough for sale at the market the next day.

More than a century later, many parts of the catacombs remain remarkably intact, chiefly because of the preservation of the City Market itself. Although not currently officially open to the public, there has been increased interest in the catacombs in recent years. Guided tours and other events are becoming more frequent as the popularity of the catacombs grows. 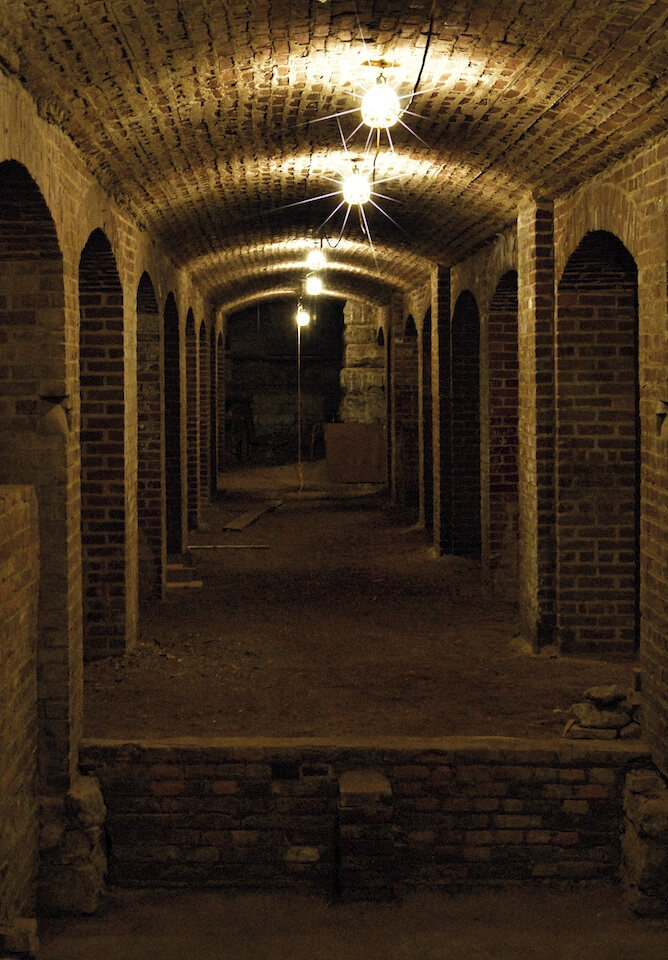 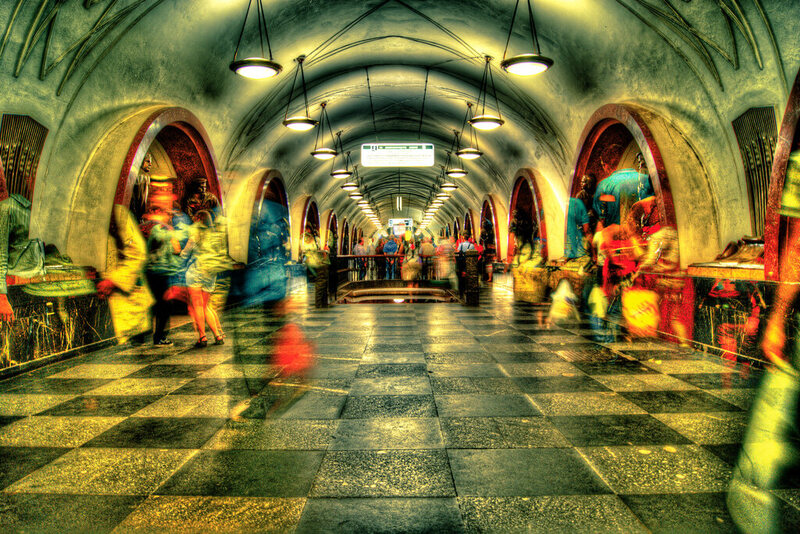 The KGB’s successor, the Federal Security Service of the Russian Federation (FSB), neither confirms nor denies the existence the existence of Metro-2, and many think it no more than a mere conspiracy theory or urban myth. But could that just be deliberate misinformation?

The story goes that during the time of Joseph Stalin, work on a secret underground metro system, parallel to the known Moscow Metro, was begun. Codenamed D-6 by the KGB, the clandestine network’s Metro-2 moniker came from Russian author Vladimir Gonik’s 1993 fictional work Preispodniaia (“Abyss”) which he claimed was heavily based on information he had uncovered concerning the real secret bunkers beneath Moscow and the underground railways connecting them.

In 2005 a program entitled Diggers of the Underground aired on the UK’s BBC Radio 4. In the program, an urban explorer took a journalist on a journey beneath the streets of Moscow, entering the subterranean world via an innocuous-looking manhole cover in an urban park. Although he was not taken to see Metro-2 personally, the BBC journalist was shown images of what his guide (Eugin) claimed to be the secret network:

“Images of huge tunnels, well-lit, a floor of concrete with rails set into it: ready for a train, a truck, or perhaps a tank. According to Eugin, the tunnels run for 25km, out into the countryside.”

Images and stories of Metro-2 continue to surface online and elsewhere, but the real truth about the network, its condition, and current purpose remain elusive. 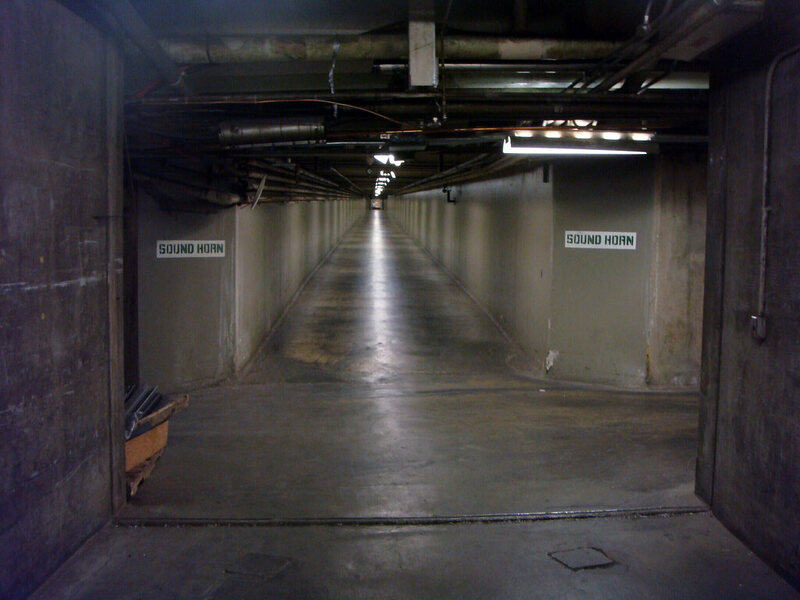 Hidden behind the Hall of Records on Temple Street in Los Angeles, there’s an all too easy to miss elevator, ready to transport the curious down into the bowels of the City of Angels and its tunnels. The ancient elevator shudders to a halt, the doors open, and a subterranean passage filled with mysterious grafitti and rusted machinery is revealed. What a great place for a party!

During the Prohibition of 1920 to 1933, when the sale, production, and transportation of alcohol was banned across the United States, 11 miles (17.7 Kilometers) of service tunnels beneath LA became passageways to subterranean speakeasies.

Aside from the service tunnels, there are also abandoned subway and equestrian tunnels. There are stories of these tunnels being used by police to transport prisoners, bank security to move large sums of cash safely, and both coroners and mobsters to store bodies. Now they are mostly closed off, but some are still accessible and are used as film locations, easy shortcuts by city employees between buildings, and a place for fitness fanatic runners to train in the rare event of inclement weather. 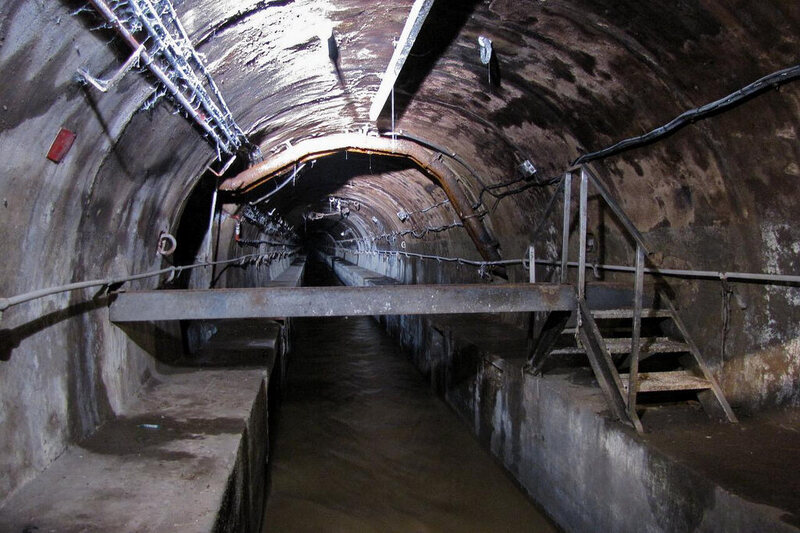 Paris’ first underground sewer was built in 1370 beneath the Rue Montmartre and, over the following centuries, the system continuously expanded and evolved into one of the most complex and impressive in the world.

In 1805, an engineer called Belgrand was commissioned to undertake the building of 182 miles (293 kilometers) of new sewers, all of which remain in use to this day. Each sewer “street” has its own blue and white enamel street sign, and each building’s outflow is identified by its real street number.

First opened to the public during the World Exposition of 1867 (when brave travellers could take a boat trip through the murky waters), guided tours of the remarkable and ancient sewers are still available via le Musée des Égouts de Paris on the left bank of the Seine. 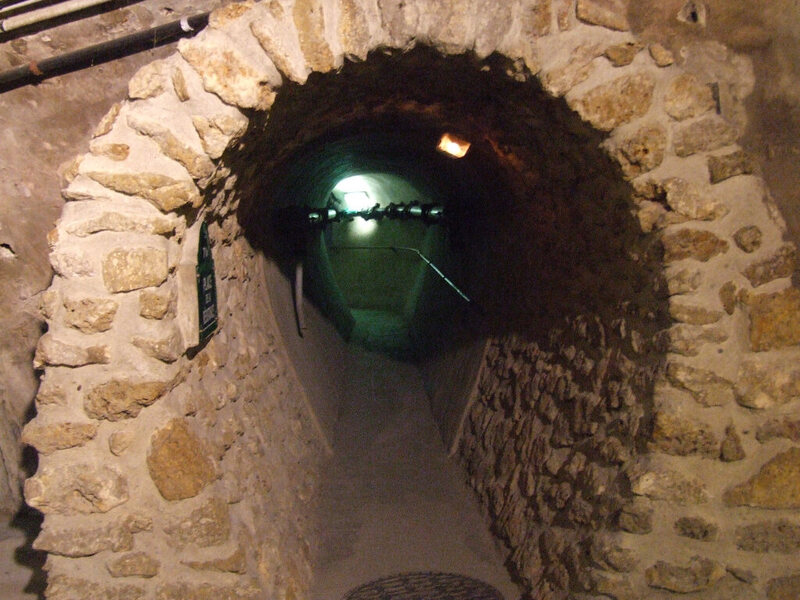 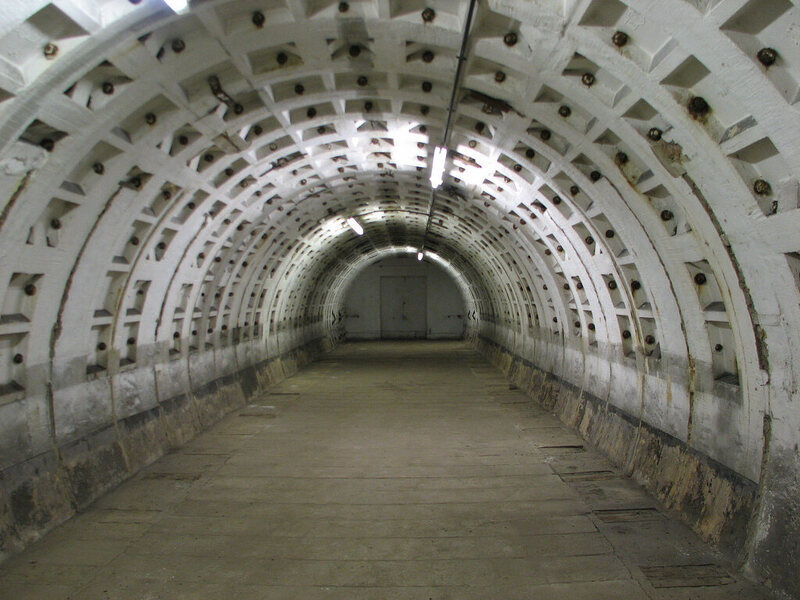 During the First World War, eight deep-level air raid shelters were specially constructed beneath eight London Underground subway stations. Each shelter consists of a pair of parallel tunnels 16 feet by 6 inches (5.03 meters) in diameter and 1,200 feet (370 meters) long. The tunnels are subdivided into two decks, and each shelter was designed to hold up to 8,000 people. Originally all were used by government personnel only, but as bombing intensified in 1944 five (Stockwell, Clapham North, Camden Town, Belsize Park and Clapham South) were opened to the general public.

Although all eight of the deep-level shelters are still in existence, Clapham North is the only one which remains more or less in its war-time condition. The other seven are now used for data storage but Clapham North has been deemed too damp for this purpose and so remains empty. 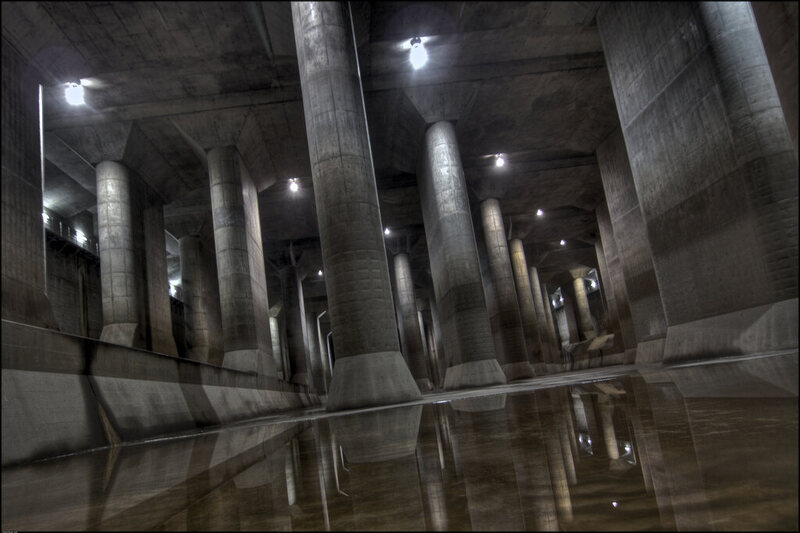 Also known as the G-Cans Project, the Metropolitan Area Outer Underground Discharge Channel in the city of Kasukabe took 17 years to build (1992-2009). Built to prevent the overflow of the city’s major waterways and rivers during rain and typhoon seasons, G-Cans is the world’s largest drain.

The Metropolitan Area Outer Underground Discharge is open to visitors and a free tour can be taken with prior booking. The tour is, however, in Japanese so non Japanese speakers need to be accompanied by a translator. Raised from the Depths, a 16th Century Ship and Her Crew Return to Public View

What You Told Us About Your Hometown’s Hidden Tunnels