Dolphins in the Red Sea May Use Coral to 'Self-Medicate' - Atlas Obscura
Want to see fewer ads? Become a Member. 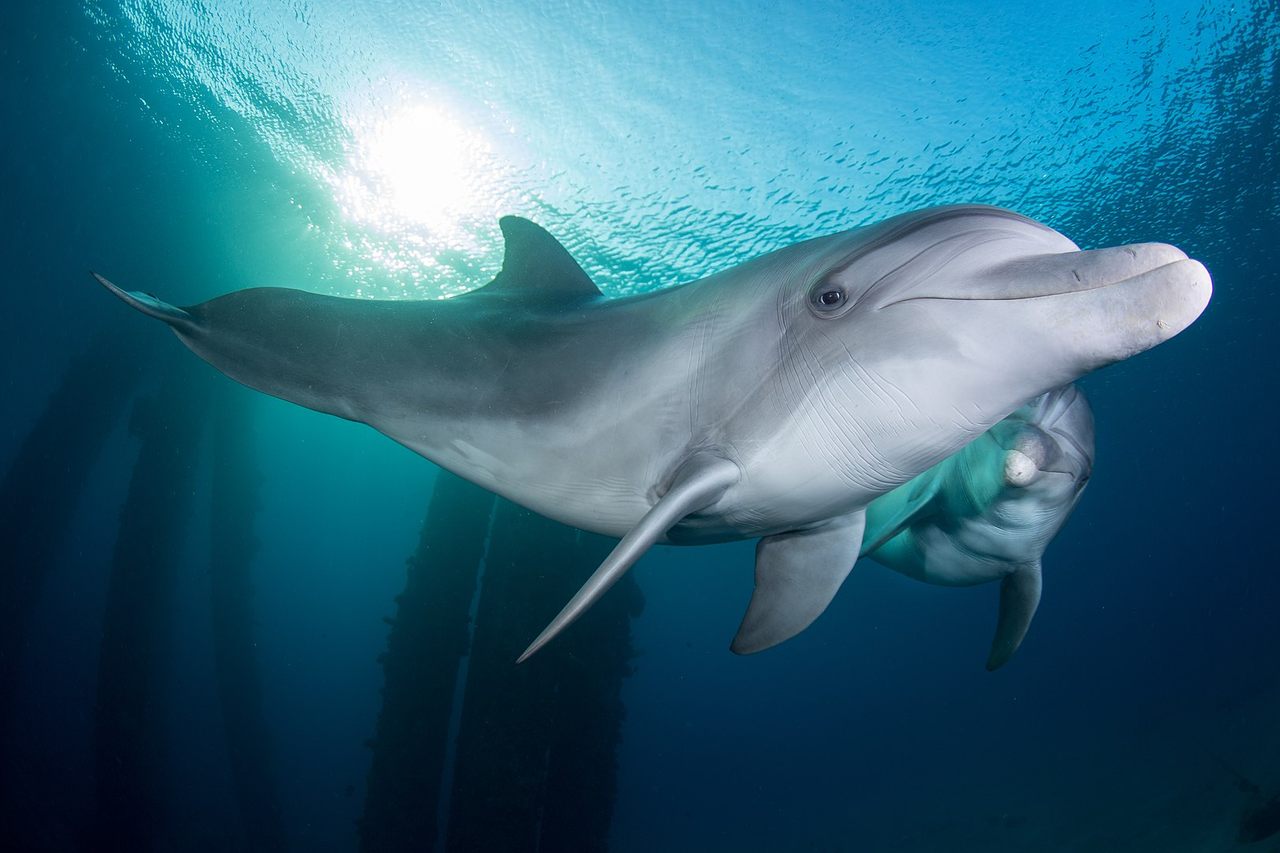 A bottlenose dolphin in the Red Sea near the southern Israeli coastal city of Eilat. Tal Shema, CC BY-SA 4.0/Wikimedia
In This Story
Destination Guide

Thirteen years ago, Angela Ziltener was diving in the Red Sea off the Egyptian coast, observing a pod of Indo-Pacific bottlenose dolphins as they played in and around a coral reef about 45 feet below the water’s surface. A marine biologist and president of the nonprofit Dolphin Watch Alliance, Ziltener dives with the animals as a matter of routine, but what she saw that day was unexpected.

“All of a sudden, they got very organized,” she remembers. The dolphins lined up, politely waited their turn, and, one by one, rubbed their body against a particular type of coral. “It was clear that the dolphins knew exactly which coral they wanted to use,” Ziltener says. “I knew there had to be a reason.”

After more than a decade of underwater observation of some 360 dolphins, as well as chemical analysis of the specific coral they preferred, Ziltener and her colleagues may have discovered what that reason is. In a paper published recently in iScience, they described how the animals might be “self-medicating” using mucus that the coral releases when the animals rub against it. Coauthor and University of Giessen chemist Gertrud Morlock, who led the analysis of the coral samples, says they contain “antibacterial, antioxidative, hormonal, and toxic compounds” that the dolphins could be using to prevent or treat skin infections.

While both scientists note that follow-up research is needed to confirm their findings, the work demonstrates the value of observing animal behavior up close in the wild. Most dolphin research is conducted in aquatic facilities or from the surface of the water—but Ziltener enjoys a dolphin’s-eye view of the animals, thanks to her skills as a diver and ability to put them at ease, “until they let us be part of the pod.”

Ziltener says earning their trust means being patient and approaching the dolphins carefully and respectfully: “Some are curious, some are more shy. The shy ones come around eventually.” The dolphins often greet scuba divers by swimming circles around them. “As a scientist, you try to be neutral and just observe,” she says. “But you have to greet them, too.”

Once hellos are out of the way, Ziltener says that the dolphins quickly settle down and do their own thing—and that includes interacting with coral, which plays an integral role in their lives. The marine biologist often observed the dolphins wake from a nap and immediately perform their coral-rubbing rituals. “It’s almost like they are showering, cleaning themselves before they…get up for the day.”

Ziltener noticed that the dolphins preferred two specific species of coral, toadstool leather and the gorgonian-type bushy sea rod, as well as ircinia, a sea sponge. The animals seemed to use them the way people use an exfoliant, rubbing a body part against the hard coral to abrade the skin and then absorbing the mucus it secreted on additional passes. Sometimes, the dolphins plucked the toadstool leather coral from the seafloor and swung it around, causing the coral to release green and yellow compounds that were visible in the water. Like a person walking through a spritz of perfume, the dolphins would then swim through the compounds, dousing themselves in the process. These behaviors, says Morlock, “are almost like a ceremony.”

Dolphin calves generally watched from the sidelines as the adults took turns with the coral. But as the calves grew older, they too began to take part, implying that “knowledge about the effects of bioactive compounds contained within the invertebrates is not innate but … socially transmitted to the next generations,” according to the paper.

Michael Walsh, a University of Florida professor and aquatic veterinarian who was not involved in the study, says he isn’t surprised to hear of adult dolphins appearing to instruct younger ones; it’s a behavior he’s witnessed in aquarium settings, too. However, he believes there are “alternative explanations” behind the coral-rubbing practices.

“They love to rub. They’ll rub on anything,” he says. “It’s common for them to slough skin on a constant basis and rubbing helps them get it off.” Walsh adds that this is why aquariums often place large, soft brushes in dolphin and whale tanks. While he doesn’t doubt that the coral contains medically beneficial compounds, he’s not sure those compounds could have much impact on the animals. For one thing, dolphin skin is highly impervious. Second, in an underwater environment, it would be difficult to keep those compounds on the skin for long. Walsh thinks the dolphins rub on coral for a very simple reason: “It feels good.”

Whether the wild dolphins are motivated by good feeling or good health, Ziltener has no plans to stop hanging out with them. Her deep affection for them is obvious: Although she can identify most members of the pod by the individual’s unique dorsal fin, Ziltener and her team also give many of them names. There’s Sefa, a young male they met as a calf who now is most often seen with “his buddies,” and Laura, a 17-year-old, friendly female who is “very popular” with tourists who swim with the dolphins. So friendly, in fact, that Ziltener and her colleagues were worried Laura was spending too much time with humans—and not enough time breeding. (When Covid-19 halted virtually all recreational and research dives, Laura finally had her first calf, which she “proudly presented” to Ziltener upon the scientist’s return to the water.)

As tourism returns to pre-pandemic levels, so do concerns over the stress humans cause the animals. It’s one of the reasons that Ziltener’s team at Dolphin Watch Alliance wants to establish an international code of conduct for guides and tourists who dive with dolphins—the other reason is to protect the coral the animals rely on for refuge, rest, and maybe even skin care. The researchers also plan to continue investigating the link between dolphins and the chemicals contained in that coral. Morlock says the beneficial compounds found in marine invertebrates could be useful for humans too—then quickly adds, “But let it be for the dolphins.”

Podcast: Phone Booth on a Roof

Revisiting the Weird and Wonderful Nature of 2022

This year, we met creatures (and other living things) great and small, from the world’s largest organism to microscopic parasites.
Video