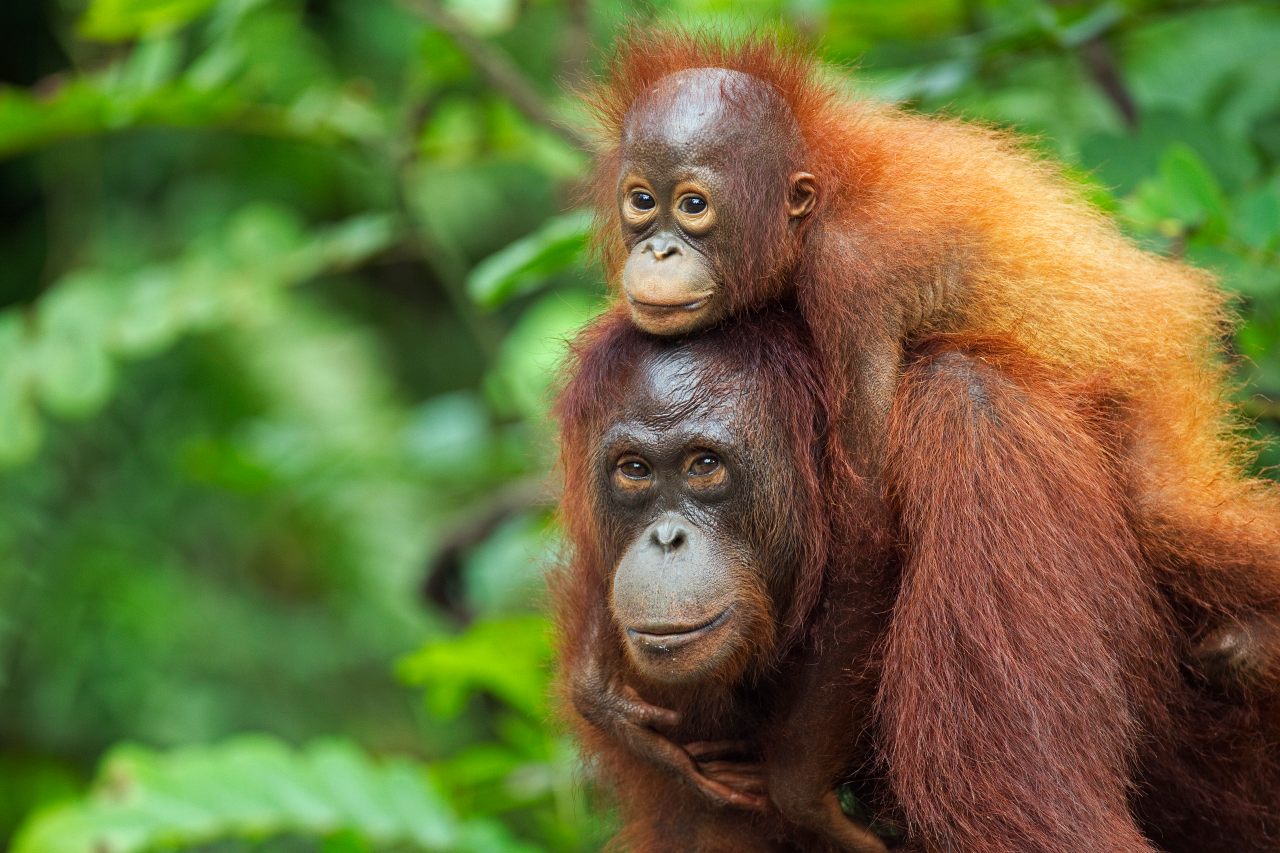 A female orangutan and her three-year-old offspring from Central Kalimantan, Borneo; primatologists found the primates reduced social interaction in the wake of destructive fires. Anup Shah/Getty Images
In This Story
Destination Guide

It’s around 4 a.m. on the island of Borneo, and a few researchers have already left camp. In darkness, they creep along boardwalk trails: lines of single planks of wood that offer solid footing in the swamp forest. Where the planks end, the scientists step gingerly into knee-deep muck and toe along tree roots.

The team hopes to reach a slumbering orangutan before she wakes and urinates. They’ll try to catch the stream in a baggie on a stick, as the animal pees from her leafy nest in the trees. Then, they’ll follow her, logging her activity every two minutes until nightfall. The morning urine sample, and more baggies filled throughout the day, will eventually be analyzed in the lab.

Stalking orangutans in a tropical swamp forest of Southeast Asia isn’t easy. “If you think you’re standing on solid ground at any point, that’s an illusion,” says Wendy Erb, a primatologist who has studied the animals in Borneo for the past decade. One slip from a root and the researchers will be fully soaked. Erb and colleagues refer to especially sodden parts of the forest as “the swamps of sadness.”

During the dry season, roughly March through October, the ground hardens and trekking becomes relatively easy. But then the researchers—and the animals they study—face a more serious risk than mud. The swamps are made of peat, slowly decaying dead stuff that is highly combustible. The slightest spark can set the forest ablaze.

That’s what happened in 2015, an extra-dry year due to El Niño. Hundreds of fires raged across Borneo. Orangutans and other forest-dwellers fled from flames, but could not escape the noxious, bleary smoke that smothered their habitat for months. “It’s like this yellowy orange haze. It’s something like a dream world,” Erb says.

Even after the smoke cleared, it continued to cause problems. The haze had starved trees of fresh air and sunlight, and fruit—the preferred food of orangutans—became scarce. Stuck in a less-bountiful forest, ape relations frayed. Adults avoided each other, scuffled more often, and cast off their own kids. A recent paper in the International Journal of Primatology documents these behavioral changes and shows, says study author and University of Zurich primatologist Maria van Noordwijk, “These fires really have a long-term effect.”

After chimpanzees and gorillas, orangutans are our next closest kin in the great ape family. In the wild, the critically endangered primates can only be found on the Southeast Asian islands of Borneo and Sumatra, where they spend most of their time resting, munching, or moving between tree branches. Some 2,500 wild orangutans dwell in the Mawas Reserve, about 1,000 square miles of swamp forest in Kalimantan, the Indonesian portion of the island of Borneo. On a small patch of this forest, in the early 2000s, van Noordwijk and colleagues built a few tin-roofed huts and opened the Tuanan Orangutan Research Station. Since then, thanks to more than 60,000 hours of observation, the team has documented over 70 different orangutans, most of which are habituated to the scientists’ presence.

“There’s nothing more magical in the world than being completely ignored by a wild orangutan, and just having them go about their day, and go about their activities,” says Alison Ashbury, a coauthor based at the University of Konstanz.

Socially, orangutans are “the introverts of the forest,” says Ashbury. At Tuanan, promiscuous males roam widely, mating with various females and then absconding. Females mostly keep to their own territories of about a square mile; offspring stay with their mothers for about eight years.

Despite their solitary proclivities, adult females do meet up for at least one reason: to let their kids romp together. Primatologists suspect these playdates are crucial for development. “Young orangutans learn so much socially, the same way that human kids do. They don’t have the innate instincts of other animals, where they can just figure it out on their own. They learn from their moms and their peers,” Ashbury says. And there’s much to learn: what to eat, how to climb and build nests from leafy branches, the dos and don’ts of orangutan society.

During the unprecedented 2015 fires, when more than 10,000 square miles of Indonesia burned, smoke particles in the air near the study site exceeded safe levels by up to 12 times. Because the swamps are peat, the fires can burn underground, travel along roots, and then pop up anywhere. About 10 percent of the Tuanan habitat burned, as the rest choked in smoke.

Researchers witnessed the orangutans coughing and physiologically stressed. “During the smoke time, they rest more. They travel less. They feed less… trying to save their energy,” says Sri Suci Utami Atmoko, a primatologist based at Jakarta’s Universitas Nasional. When males tried to make long calls—booming shouts to announce their presence—it sounded like they were choking, she says.

Ashbury, Atmoko, and colleagues analyzed recorded observations for 13 adult females over an eight-year period, from 2010 to 2018, that revealed changes in the apes’ lives before, during, and after the fires. During the fires and a subsequent three-year fruit “depression” with fewer resources, the animals ate lower-quality foods, including bark and leaves. They also rested more and roamed less—what Ashbury calls an “extreme energy saving strategy.” But most interesting to the scientists, the orangutans’ already low-key social lives took a hit.

“At first you had the impression that moms were just cranky,” says van Noordwijk. But the analysis showed more serious changes. Mothers spent less time with unrelated adults, which meant fewer playdates for their kids. The moms also pushed their older offspring away at a younger age than they did before the fires.

Erb, who was not an author on the study, wonders “about the long-term consequences to these baby orangutans in terms of their social development and their ecological competency.”

Beyond orangutans, the new research is “really fascinating,” says University of Denver anthropologist Nicole Herzog, who was not involved in the study but researches primate responses to fires in other habitats. “Ecological change,” she says, “does lead to social reorganization.”

Though the scientists focused on orangutans in the paper, the forest holds many other rare species including leopards, slow lorises, the world’s smallest bears, and its biggest bats. Understanding unexpected long-term impacts on the ecosystem is important as climate change fuels more frequent forest fires—and potentially more changes to animal behavior that may linger long after the smoke clears.

Biruté Mary Galdikas has quietly fought on the frontlines of some of conservation’s biggest battles.
science

Scientists observing a pod in the wild think the animals may choose specific species for a skin care wellness routine.
science

The Hoopa Valley Tribe’s wildlife division maintains some of the most detailed documentation of fishers in North America.
Video