Without a Source for Salt, This Tribe Created a Delicious Substitute - Gastro Obscura
Want to see fewer ads? Become a Member. 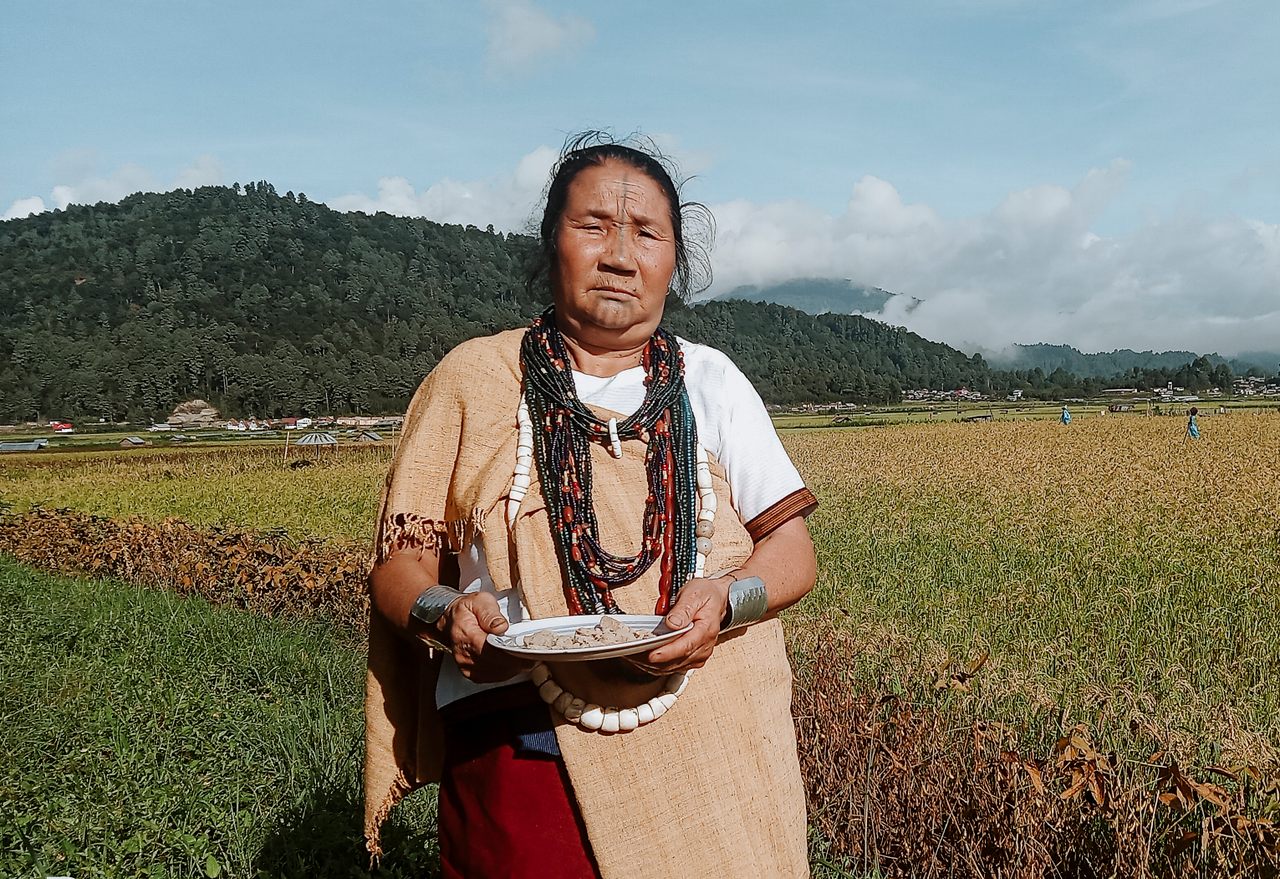 An elder Apatani woman holds a plate of tapyo in the paddy fields. Joyonto Chakraborty
In This Story
Destination Guide

Tired from a day of tour guiding and tending to his bamboo plantation, Pussang Punyo returns home for a pint of rice beer with tapyo (pronounced tup-yo). A homemade salt, tapyo adds a tartness to the drink, balancing out the sweetness.

“My aunt made it at home,” says Punyo of tapyo. “It took her about a week. She made it especially for my friends who are visiting over the weekend as we plan to make pike pila” (a dish traditionally used as a chutney and highly regarded by the Apatanis).

Punyo belongs to the Apatani tribe, one of the oldest non-nomadic tribes in India. They live among paddy fields and dense green hills in Northeast India’s Arunachal Pradesh. It is this location that explains why Punyo’s aunt, like many Apatani have for millenia, makes her own salt.

“We’ve always lived amongst the mountains and had little to no contact with the outside world,” says Hibu Rimung, another member of the tribe. The isolated area has no saltwater or salt deposits. “When we eventually learned about salt, we couldn’t afford it. It was overpriced as getting it to Ziro Valley was challenging for traders.”

Remarkably, the tribe responded by developing their own salt substitute that is not only a unique ingredient, but spared them from the health problems that often plagued regions without access to salt throughout history. Tapyo is not literally salt—rather, it’s made from plants and plays a similar role in terms of both health and taste.

Salt is ubiquitous today, but it was once as valuable as gold, collected, traded, and hoarded for its ability to preserve food and make just about anything taste better. In the Apatani diet of rice, vegetables, meat, and fish, with no salt and few spices, tapyo was similarly cherished, served on the side and used in minute amounts for flavor.

When I ask about the invention of tapyo, I learn that it was likely an accidental discovery. “Traditional Apatani houses have the chulha [a three-tier hearth] located in the center of the house. When people had finished eating, they would use the ash as an alternative to soap while washing their hands,” says Rimung. “It is how they realised the ash had a salty flavor and could be used to season meals.”

I naively wondered if eating ash was harmful, but Rimung tells me that medical researchers have concluded that it is safe, just not advisable to have by itself or in large quantities. I was not able to confirm this research, but since it’s bitter, the Apatani sprinkle it sparingly, and ash has played a role in food practices around the world and throughout history, such as the nixtamalization of corn in the Americas.

Instead, tapyo seems to have provided health benefits for generations. Unknown to the tribe at the time, they were obtaining the required amount of iodine, a mineral in salt that the body does not produce naturally. (Not all salt contains iodine, though, or high quantities of it, which is why iodine is now routinely added to make “iodized” salt.)

The Apatani’s Ziro Valley is not the world’s only salt-poor region. Areas in Western Africa and along the Sahara have some of the world’s least access to salt. Centuries ago, this led to empires rising based on the salt trade. But even today, in countries such as Sudan, the inhabitants consequently suffer from iodine deficiency, which causes goitre and increased infant mortality rates, especially in remote forested or mountainous areas. But as far as Punyo’s elders can remember, none of the tribe members ever had swellings or lumps at the front of their necks (from goitre); nor did babies lack cognitive skills.

Since they don’t use tapyo consistently and making it is lengthy and tiring, tapyo isn’t made regularly. The Apatani instead make it during the harvest season and when needed, mainly for festivals and special occasions.

As I watch, Rimung takes ash made from local shrubs such as pepu (similar to bamboo), banana leaves, sarshe (finger millet), and grass-like tarii, which she previously dried in the sun for several days and then burned.

She then places the ash in a conical basket filter called a sader and slowly pours in water, which passes through the ash and accumulates at the bottom—a process that can take from three days to two weeks. She then puts this dark filtered ash water, called pila, away for about three days before making tapyo.

When the pila at the bottom starts to taste slightly less intense, she stores it separately to flavor pike pila.

After three days, it is time to make tapyo. Rimung places the pot over the hearth, adds a little liquid starch collected from boiling rice, and lets it evaporate until it creates a sheer layer that prevents the pila from sticking. She then adds pila in small portions until it dries and forms a solid block that resembles lightly colored clay. She leaves it to cool and then wraps it in palm grass and leaves it above the hearth to stay dry. She’ll take out bits at a time, primarily for seasoning pike pila.

Only the elders know how to make tapyo, Rimung says, as younger generations are moving to cities to pursue education. But some are curious to learn.

When I ask Punyo if he thinks tapyo will ever vanish, he vehemently shakes his head from left to right. “Some people use store-bought salt to make pike pila, but it doesn’t taste right without pila, and for pila, we need tapyo,” he says. “People especially reach out to me when they visit the valley and ask where they can try it, so we need to continue making it.”

The Mysterious Street Snack That Has Baffled Botanists for Decades

Even DNA tests have yet to confirm its identity.
food

This elusive treat lives up to its nickname.
quarantine

Join us for a daily celebration of the world’s most wondrous, unexpected, even strange places.
trees

Which trees will live and which ones will die?
Video • PinDrop