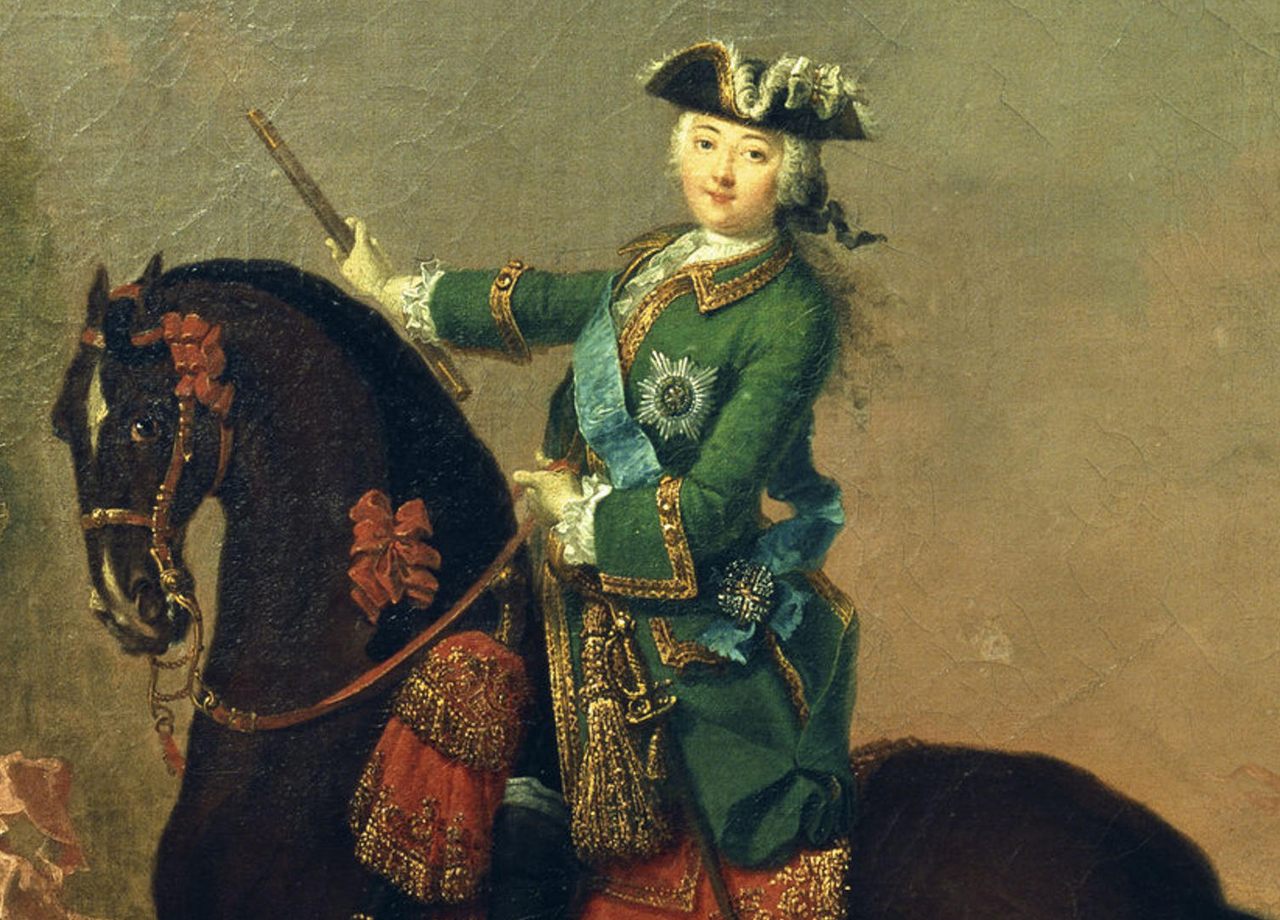 Way before businesswomen wore shoulder pads in the 1980s to shove their way into the male-dominated business world, Empress Elizabeth of Russia and her niece-in-law Catherine the Great pushed 18th-century sartorial gender norms to cement their authority. “The Empress [Elizabeth] had a fancy to have all men appear at the Court balls dressed as women and the women as men, without masks,” Catherine wrote in her memoirs. These “metamorphosis balls” became a weekly occurrence at the Russian court. Elizabeth dressed as a Cossack to one ball, a French carpenter to another, and, on special occasions, a Dutch sailor named Mikhailova.

Elizabeth held the first metamorphosis ball as part of the festivities celebrating her coronation—and then seven more across a week of revelry. “Elizabeth had tens of thousands of dresses. She loved dresses. She loved the balls. And, the balls, the dresses—it was all part of her father’s [Peter the Great’s] plan to Europeanize Russia,” says Hilde Hoogenboom, an expert on 18th-century Russia at Arizona State University and translator of The Memoirs of Catherine the Great. The metamorphosis balls, like most things in aristocratic 18th-century Russia, were part of this same effort. “Before the 18th century, Russia was a very different kind of country and its court culture was very different,” says Hoogenboom. “It wasn’t at all what we think of as European. Peter the Great set out to change that.”

Under the influence of Western European advisors, and his own travels across the continent, Peter instituted rules: He forbade traditional Russian dress, conducted court in French, required men to shave their beards, and even changed his title from Tsar to Emperor of All Russia to align himself more closely with Rome and Europe. He moved Russia’s capital from Moscow to St. Petersburg. He started hosting European-style balls and, for the first time in Russian history, inviting women to court. Then throughout the next century, four different supreme rulers of the country were Empresses of All Russia: Catherine I, Anna Ivanovna, Elizabeth, and Catherine II (also known as the Great).

It was a huge change for the society—from no women at court to being ruled by women for the better part of a century—but it wasn’t as if Russia had suddenly shed its roots. “Russia is obviously a patriarchy. It was then and still is,” Hoogenboom says. “But, at the same time, all of this [Europeanization] is new and so if it’s new and if it’s Western … they went for it.” Several countries throughout Europe had female leaders during this time, from Great Britain to Portugal to Austria, and all of them had to face down the patriarchy to enforce their rule. In Russia, it turned out, the best way to do this was to throw a party (as a way to look more European).

During her reign, Elizabeth held two balls a week. One would be extravagant, with a guest list of more than 800, and all of Russia’s premiere merchants and nobility would vie for a place on that list. If you were lucky enough to snag an invite, you’d get all dolled up in your best wig and mantua (or court dress), and arrive in your finest carriage at the massive Winter Palace in St. Petersburg (460 rooms at the time). Then you’d stand around and watch your superiors dance.

According to Pierre Rameau’s 1725 treatise on dance, Le Maître a danser, 18th-century royal balls were all about reinforcing power structures, particularly in Russia, where balls carried such heft. The mere act of being allowed to dance was an expression of rank.

The second ball of the week would be, by Imperial Russia standards at least, far more intimate. Every Tuesday, 150 to 200 of Elizabeth’s most trusted advisors, friends, and preeminent nobles attended a masquerade, which had grown from an Italian Carnival celebration to become a fixture of European nobility across the continent. It was these somewhat transgressive celebrations that hosted the metamorphosis balls. The men would be required to wear the stockings, corsets, petticoats (up to five was customary), ruffled lace sleeves, hoop skirts, and elaborate sack back gowns that, on any other occasion, the women of court would’ve worn. The women, on the other hand, had to wear men’s embroidered waistcoats, full-skirted coats, breeches, white silk stockings, shoes with ostentatious buckles, a powdered wig, and an unwieldy sword.

Masquerades, and by extension metamorphosis balls, were all about “turning power on its head for a day and disrupting the norms of society,” says Shaun Cole, a professor of fashion at Winchester School of Art in England who wrote about cross-dressing in Fashion Stylists: History, Meaning and Practice. “By dressing up, by disguising yourself, a masquerade was [a means to] liberate yourself for a night from the strictures of your class position, your social position, and allowed people to behave in ways that they might not be allowed to in other circumstances.” No one knew, at least in theory and as part of the performance of the thing, who was the empress and who sold lumber for a living.

In the metamorphosis balls, in which both men and women dressed as the opposite gender, there are two power shifts going on. First, Cole says, “there’s the power of somebody making you dress outside your gender.” Second, there’s the power play that “by doing it yourself, you are critiquing the power dynamics of gender and gendered dress.” By forcing their male courtiers to dress as women, Elizabeth and Catherine were reminding everyone who was boss. They made the rules. And even men had to follow them.

In her memoirs, Catherine explains how the men of court hated the metamorphosis balls “because they felt that they were hideous in their costumes.” The women of court weren’t much happier: “most of [the women] resembled stunted little boys, and the eldest had fat, short legs that hardly flattered them,” she wrote. Only Elizabeth and Catherine seemed to enjoy them. They also, according to Catherine, both looked quite handsome dressed as men. Elizabeth’s contemporaries, perhaps as a bit of a jab, claimed that her obsession with the metamorphosis balls came from a desire to show off her legs. Whether that’s really why Elizabeth held the balls is a matter of historical debate, but she does appear to have had great legs. Catherine wrote that Elizabeth had “more beautiful legs than I have ever seen on any man and admirably proportioned feet.”

After Elizabeth’s more than three-decade reign came to an end with her death in 1761, Catherine continued the tradition of metamorphosis balls. But Catherine didn’t become empress right away. Like Elizabeth and quite a few other Russian rulers, she assumed power in a bloodless coup. After six months of ineffective rule by her husband, Peter III of Russia, she took the crown with the help of her lover Grigory Orlov and his powerful family. How’s that for a power move?

During her reign, from 1762 to 1796, Catherine sometimes took the power play of cross-dressing beyond the ballroom. Soon after the coup, she paraded at the front of an army regiment dressed in the uniform of a male guard. In her memoirs, Princess Ekaterina Dashkova describes how “after a light meal, the Empress proposed to march to Peterhof at the head of the troops, and she appointed me to accompany her on this expedition. She had the idea of wearing a guard’s uniform and borrowed one from Captain Talyzin, and I, following her example, borrowed Lieutenant Pushkin’s uniform—these two young officers were about our height.” Catherine commissioned a now-famous portrait of herself by Vigilius Erichsen to commemorate the event. It shows her in the traditionally male guard uniform, in a style that dates back to Peter the Great. She took on the same superlative as well.

Women have continued to use traditionally male dress to claim and celebrate their power. In the 1870s, actress Sarah Bernhardt wore a customized trouser suit that scandalized her fellow Parisians. In the early 20th century, Coco Chanel designed suits and blazers for women, helping spell the end of the corsets that had dominated female fashion for centuries. Clothes have always carried political weight, especially for women, according to Cole, who can use them as means of “challenging power and trying to claim a certain personal power.”

A new book tells the tales of the queens of Jerusalem.
pyramids