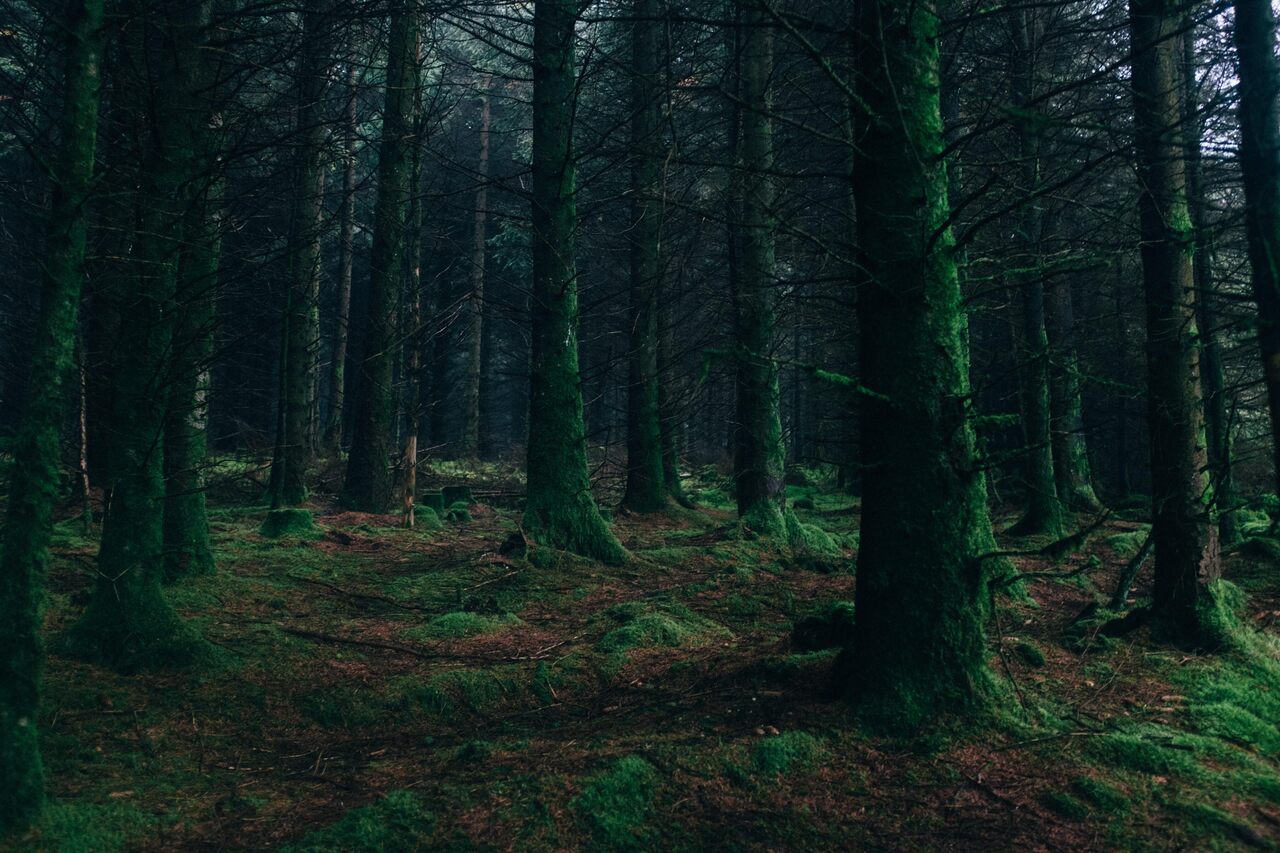 "It's scary and dark out in the dark forest." Vital Sinkevich / Unsplash

Inspiration can come from anywhere—a conversation overheard at the grocery store, a site you see while traveling, a story in the news. From these starting points, you never know what twists and turns a story could take. So, a few weeks ago when we gave you the opening lines from 10 Atlas Obscura stories and asked you to write something new from them, we had no idea what to expect.

We got a treasure trove of epic journeys and alien creatures, mysterious islands and everyday problems. The stories ranged from a few sentences to many pages long, and even a couple of poems thrown into the mix.

We’ve compiled a few of our favorite responses below. Some are full stories and some are excerpts (with full text available in our forums), but each one takes the opening line in a unique direction. If you have a story of your own you’d like to share, you can head over to our community forum as well.

On the island of Tashirojima in the Miyagi Prefecture, the cats outnumber people, and the people like it that way. But on the other side of the world, there’s a small village where the people are outnumbered by a herd of vicious, bloodthirsty alpacas, and no one goes outside during the new moon.

On a small island in the Pacific Ocean, the residents cower in fear as massive casts of crabs take over their dwellings twice a month. The crabs lie in bed, waiting for the people to bring them large baskets of fish, barnacles, plants, snails, shrimp, and worms. Only after they are satiated do the invaders return to the sea.

In a part of one of Switzerland’s cantons, which I have agreed not to name, the population stays at home every other Tuesday between the hours of midnight and 4 a.m. when the marmots and snow voles invade the town and devour everything in their path.

It’s hard to estimate the number of places where the people are outnumbered by local fauna; and there are those who swear that revealing the secret will bring on further attacks. I talked to a man would not reveal his birthplace, but shared the terrifying story of the dingoes who … well, it’s safe to say you’ve seen the movie and according to him “Doesn’t know it by ‘arf’”.

No one knows why these people suffer such tribulations, while others get along famously with their resident species. Scientists have been studying them for years, and some have also fallen victim to this phenomenon. A graduate student on one of the south Antarctic islands disappeared, having ignored his team’s warnings about the massive waddles of bitter, vengeful penguins who emerge when the temperature hits 11°C and take their toll.

On the island of Tashirojima in the Miyagi Prefecture, the cats outnumber people, and the people like it that way. I hope this continues, but to prepare for the inevitable day when the cats turn on them would not go amiss.

Marimo might be the cutest plant on Earth. And the deadliest. The agency needed a fail-safe emissary to infiltrate the target and knew Marimo, pretty, petite, fit, and brilliant, would easily charm the advance guards and outwit the superiors. The agency charged with dissolving threats and seizing assets could not have found a more capable or unsettling executrix than Marimo, who knew the culture, spoke the language, and was conspicuously motivated. When she was recruited her unique skills were known to the agency and her work ethic and efficiency both impressed and disturbed them. Their choice was foregone even knowing they could face trust and containment issues with Marimo.

It’s said that not all who wander are lost, and that’s mostly true.

Except in my case. I found myself lost. Completely. All alone in the depths of Marrakesh, Morocco. This was the first time my sense of direction and phone lost power at the same time. How could this be? I go through little alleyways with colorful shops on both sides. They are selling everything from olives to leather handbags.

At first I was wondering through the Sulk, this is what they call the thousand year old shopping district. It is a beehive of little alleyways filled with people, shops, motorbikes and odors. The colors drew me in. I kept walking down one alley into the next thinking I knew where I was going. It wasn’t until I started to try and find my way out that I realized I was lost, in Morocco, hoping and praying I could find someone that spoke English.

Initially I wasn’t too worried. Don’t all roads lead to home? As it became clearer that I was in fact lost I began to feel that little bit of fear in the pit of my stomach. Why did the men suddenly seem so menacing? Their dark hair and eyes along with their deeply tanned skin did not help to calm me. All I could think about was the headline “Old Woman Lost In Medina in Morocco” and that old woman was me! [Keep reading.]

It’s said that not all who wander are lost, and that’s mostly true. Apollo wasn’t lost. He knew where he was going. He just didn’t know exactly how to get there. He glanced at the picture he was holding again, of the vision he saw constantly. In his sleep, when he closed his eyes, or just out of the blue. At first the image of the building surrounded by sandy clouds had just seemed like something made by his imagination, a product of his fascination with geology and architecture. After seeing it on a constant basis and hearing voices telling him to go, however, he decided it was more of some sort of sign. So he left his house. He hadn’t even told anybody. Apollo lived in an old Victorian style house far away from the rest of society, with a beautiful view of the land around. He loved it there, but he felt he needed to go, so he did.

Apollo had been walking for about three days now. He’d brought a backpack filled with maps and blank paper to illustrate his own map, along with essentials like a sleeping bag and sustenance. Here he was, staring at the drawing he’d made of the palace looking building, wondering if he’d made a mistake. Maybe they weren’t visions. Maybe the image was just a creation of his mind that he was taking too seriously. The building didn’t seem like something that would still be around, and if it was it most likely would have been made into a museum or attraction of sorts. His mind swirled with a storm of reasons why this may not be a good idea, and yet he kept walking. Something inside of him, even though it was almost drowned out by the sea of pessimism, told him that he was doing the right thing. Somehow that was enough for him to want to continue. [Keep reading.]

In the Fishlake National Forest in Utah, a giant has lived quietly for the past 80,000 years. The giant, whom local residents will soon know by her preferred name of “Judy,” produces surprisingly deft woven mats and rugs, given her enormous hands, and has a penchant for word games. Unfortunately for her fellow players, her vocabulary is 80,000 years old.

“Get Me Chase Holden”

Just before nine on a drizzly, slate-colored Saturday morning, the grassy patches and paved paths around Central Park’s Turtle Pond were wild with activity. Everything seemed normal but it was all fake. Instead of New York, the scene was playing out on the backlot of a studio in Hollywood.

I was working on the set of a movie as an extra with my friends Kendra, Pam, and Brian. We’d worked on probably a dozen films together and it was always fun hanging out with them. This was good because despite the long hours, there’s a lot of down time on a set. Every new scene requires the movement of tons of cameras, lights, and people. While this is going on the actors go to their trailers and us extras go to a holding area which may or may not have food, working toilets, and comfortable seating.

On this shoot, though, we’d hit the trifecta: snacks were available at what’s called “Craft Service,” there were ample restroom facilities, and the holding area actually had sofas. Soft, comfortable, beautiful sofas! After the second or third scene of the day we had about an hour and a half to kill so we sat around and talked about the latest overnight success in town, Shonda Jenkins, and how every agent in the City of Angeles was calling her with audition offers.

In her best “Studio Boss” voice, Pam was yelling, “Get me Shonda Jenkins!” which put us all in fits of laughter for a good twenty minutes. Brian just smiled with an arched brow like he always did, and said, “We should make someone up, and start a rumor that everyone is looking for a meeting with them.” [Keep reading.]

“The Maidens of Sparta”

The maidens of Sparta spent long hours under the bright sun,
Their minds half on their games, half on the night
That waited for them, reward for a hot day done.

There torches glowed from doors half-shut but still in sight;
Within those rooms, musicians and cup-bearers lazed,
Their minds half on their games, half on the night

Soon to fill with dance, and strong red wine that dazed
Yet somehow brought the sharpness of a blade
To those dim rooms where musicians and cup-bearers lazed.

To thoughts of future practice outside town-
For hearts and minds must train to gain success
In deeds of sweat and blood and laurel crown.

Another dawn—they rise to give their all, no less;
The Spartan maids spend long hours under the bright sun,
For hearts and minds must train, to gain the success
That waits for them, reward for a hot day done.

Celebrate the Heyday of Sweet American 'Salads' With These 7 Dishes

Highlights from an era of convenience, creativity, and Cool Whip.
obscura academywritingpoetryliterature

A recently resuscitated online literary journal is dedicated to the humble napkin.
lgbt

In the 19th century, the poem "Don Leon" argued for British Parliament to drop the death penalty for homosexuality.
architecture

Even a short local walk can hold countless stories.
Video

Writing Challenge: Pen a Story Based on an Intriguing First Line

We'll get you started, the ending is up to you.
Read more
Thanks for sharing!