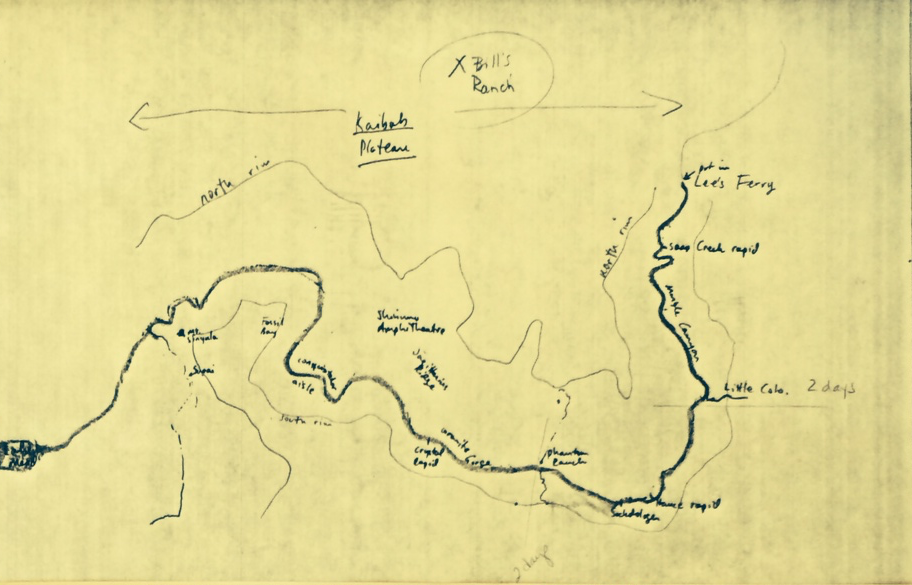 When writing Grand Canyon Odyssey, Leibold drew a map of the canyon and river, to keep track of his protagonist's progress down the canyon. The map of the various storylines is below. Jay Leibold

When Jay Leibold started writing Choose Your Own Adventure books in the 1980s, no one told him exactly how to create a branching story with a passel of different endings. “It was a seat-of-the-pants, use-your-intuition kind of thing,” he says.

As the story developed, dividing along different branches, Leibold would map its shape on 8 1/2-by-11-inch pages. One page, two pages, then a branching choice. “There was lots of erasing, crossing out, trying again,” he says. As the story grew and the first half became more settled, though, a standard, letter-sized piece of paper wasn’t large enough to hold the whole map of the story. Eventually, he had to tape two large pieces of paper board together in order to hold it.

After reading Atlas Obscura’s story about maps that reveal the hidden structure of Choose Your Own Adventure stories created by the publisher ChooseCo, Leibold sent us images of the original, hand-drawn maps he used to create some of his CYOA books. Here’s the final map of Sabotage, the first book Leibold contributed to the series:

Sabotage had 39 possible endings.* “It was so challenging, and it really did feel pretty great to have it finished and take it in all at once, on one chart,” he says.

Leibold would eventually write 15 Choose Your Own Adventure books, and each time he developed a better feel for how to shape the story, he says. Each branch, for instance, could not divide into many choices. Some had to come to an end relatively quickly. “We had the idea that there should be a choice on nearly every page,” says Leibold. “It was never dictated but I think that’s the feeling we all had.”

Building in so many choices to the story meant enough action had to be condensed in between each branching point. One challenge was telling enough story in between each branching point that the next choice still felt meaningful; another was building enough material into each storyline so that each different ending felt satisfying. “Part of the game for me was for the reader to find the story lines that went on the longest,” he says.

One way to make story lines last longer was to allow some of them to loop back to an earlier moment in the book. The challenge, though, was making what came next consistent with both paths that led there. Leibold also experimented with stories with fewer choices. One of his books, Surf Monkeys, has the fewest endings of any book in the series. Even when a story had a certain linear progression built into it, though, say when a plot revolved around a journey, it was possible to branch off in many directions. For the book Grand Canyon Odyssey, Leibold created stories that brought in geology, dinosaurs, and Native America tribes, and he found it helpful to map both the geography of the trip through the canyon (top image) and the structure of the story (below).

Having fewer choices, he says, “put pressure on the choices to feel really meaningful. When you’re doing a choice every page or two, sometimes you just scramble—you have to come up with some kind of choice. Not that much has happened. Sometimes the choices were more mundane or seemingly trivial, even though they might lead to very different consequences.” With fewer choices, each one could be a bigger, more weighty decision.

“Maybe the best way to describe writing these books is that it’s a real juggling act,” says Leibold. “You’re juggling storylines and possibilities. The number of pages and space. The choices and branches and how do they balance out. It’s like three different dimensions of things that you’re juggling. It requires a certain flexibility of mind.” Having a map to keep the whole picture in one place helps all those pieces stay in the air, tumbling and flying into graceful, shifting stories.

*Correction: This post previously said Sabotage had 30 endings, when in fact it has 39!

They were giants for their time.
secretsmapsbooksfeatures

Why the London of British Literature Barely Changed for 200 Years

An innovative mapping project uncovers just how limited the literary version of the city has often been.
maps

In Its First Decades, The United States Nurtured Schoolgirl Mapmakers

Education for women and emerging nationhood, illustrated with care and charm.
maps

A groundbreaking female cartographer charted the evolution of the United States—and the dispossession of Native Americans.
Video • Object of Intrigue

If you decide to see more, click on this story.
Read more
Thanks for sharing!