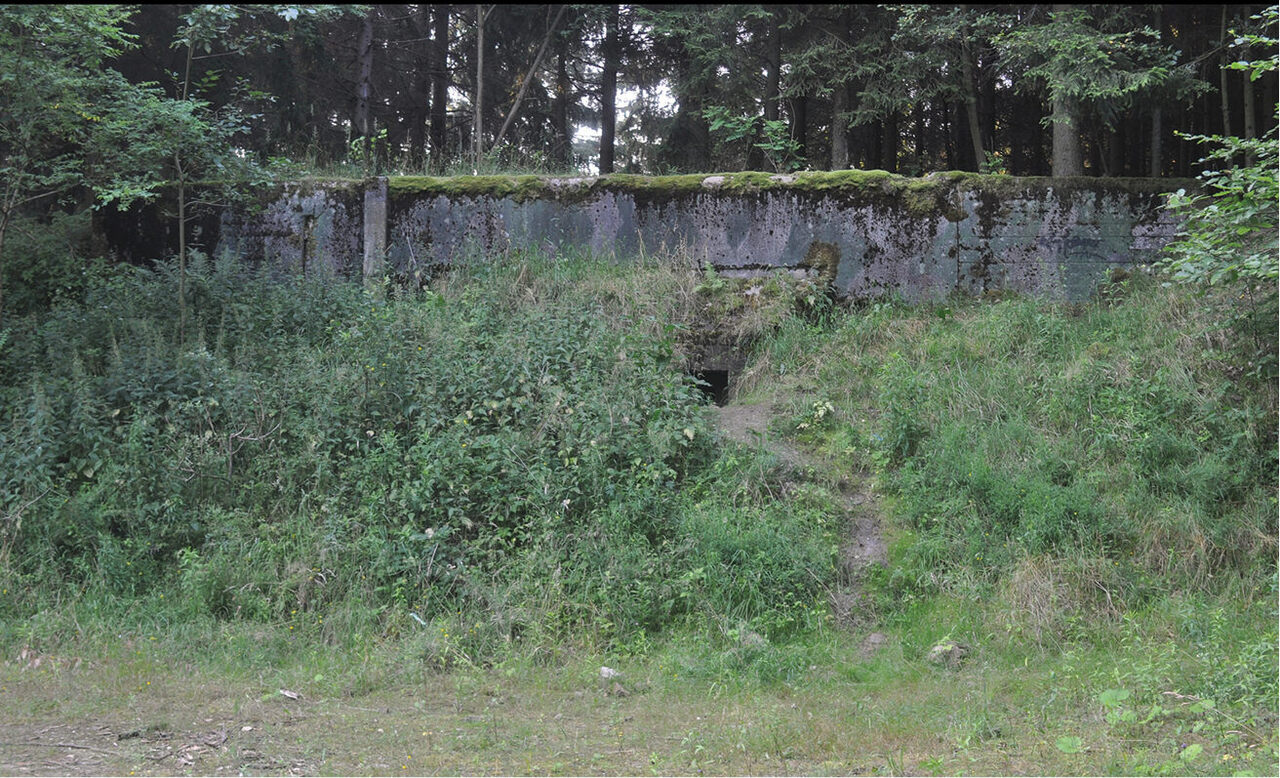 Deep in a forest in western Poland, is an abandoned Soviet bunker with an unusual ant situation. Stephan Wojciech
In This Story
Destination Guide

Somewhere near Międzyrzecz in western Poland, there is an abandoned Soviet nuclear installation. Patches of pine and spruce, which had been planted as camouflage, are still doing their job. Vegetation entirely envelopes the concrete entrance, which is blocked off but accessible to bats and determined, rule-breaking humans. On top of a ventilation pipe that juts out from the mostly underground facility, there is big, mound-like nest of wood ants. It is a perfectly normal place for wood ants to live. They feast on the sweet honeydew secreted by aphids dwelling in nearby pine trees, and soak up the rays of post-Soviet sun.

But within the bunker, in a small room at the bottom of that shaft, there was a second colony of ants. These ants had no sun, no warmth, no light, and no honeydew. So they survived on the flesh of their fellow ants. Their colony was the wretched result of individuals falling from the healthier colony above, and with no way to climb out of the bunker, they could never return. It feels like a mirror-horror that could have come straight out of the mind of Jordan Peele, except that instead of a commentary on race and class in America, it’s a testament to one population’s sheer will to survive. “It is a peculiar colony” says István Maák, a zoologist at the Polish Academy of Sciences in Warsaw. “They are doing the best they can, surrounded by dying.” This year, Maák had taken it upon himself to do something about it, and recently published the tale of a momentous rescue in the Journal of Hymenoptera Research.

The abandoned bunker was once known as Special Object 3003 Templewo, a military complex active from the late 1960s to 1992; it was abandoned right after the Soviet Union fell. Scattered throughout the forest like now-benign landmines, bunkers like this one were used to conceal the assembly and storage of both nuclear and conventional weapons, writes historian Jarosław Pałka in a 2018 paper in The Central European Journal of Social Sciences and Humanities. The core of the base comprised two underground magazines, and the whole thing, from certain angles, now looks like little more than a green mound bulging from the earth.

The ants were first discovered in 2013, during the first year of a campaign to monitor the health of bats known to frequent abandoned bunkers like these. They make great bat dens, with internal temperatures that hover around 44 degrees Fahrenheit in the dead of winter. Though the bunkers had been sealed, curious tourists and intrepid bat-lovers had made their way in, according to an earlier study in the Journal of Hymenoptera Research that first documented the existence of the colony, authored by Wojciech Czechowski, Maák’s colleague at the academy.

To understand the bizarre nature of this colony, one must understand the layout of the bunker. Somewhere inside its reinforced concrete walls, which are over three feet thick, there is a small, closet-like room, cryptically numbered 12. The aesthetic of its walls screams “abandoned Soviet nuclear bunker,” with peeling paint and swelling limewash. The floor, once terra-cotta, is now a pile of rubble and soil. In the ceiling is a hole that holds the ventilation pipe, which is approximately a foot wide and connects the chamber to the outside world, about 16 feet above. Ant Colony One, which rejoices in the light and imbibes sweet honeydew, lives right on top of the pipe’s opening. “These ants are mostly eating aphid [honeydew],” Maák says. But when an unlucky ant takes one wrong step, it can tumble down the perilous chute, where it becomes a member of Ant Colony Two. No light, no aphids, no escape. “These ants are eating corpses,” he says.

This is actually not an uncommon behavior for wood ants. The species is known to engage in battles among colonies, particularly in spring, when they extend their ranges in search of food. Maák calls this time of year the “wood ant wars.” After a battle, the victors feast on the bodies of the defeated. Down in the bunker there were no alternative sources of food—not enough bat guano or passing mites, for example—so instinct kicked in.

Ant Colony Two’s drive to survive resulted in an extraordinarily meticulous ant necropolis that lined the walls of the small room and spilled through the doorway. “They were organizing their corpses in waste piles, putting neatly in the corners, and transporting it away,” Maák says. There were approximately two million corpses, many of which displayed bores from bites and fret holes—signs that their contents had been consumed, he says.

Ant Colony Two seemed to have had some sense of its situation. “We have seen ants wandering quite far away from the bunker colony that couldn’t find a way out,” Maák says. “The hole was too far away.” The ants did not reproduce, but their numbers were sustained by their clumsy brethren above, which ensured that the population hovered at around a million since 2013 (compared with the much larger Ant Colony One, whose mound is two feet high and 10 feet wide). “They had no larvae and no queen,” he says. “But still they survived and kept their organization without any goal of life.” In 2015, the researchers dug into the second colony’s mound, directly below the shaft, to look for traces of pupae, but found nothing. When they returned 2016, the ants had repaired the mound.

Wood ants are remarkably resilient critters. For example, for the past 30 years, a colony has survived on Skeleton Islet, a barren rock of less than half an acre in the Tvärminne archipelago in southern Finland. Czechowski first established that colony in 1992 in hopes of identifying the most austere conditions that could support a population of wood ants. The insects exceeded his expectations, and subsist on the honeydew of aphids living on the island’s lone pine tree. When Czechowski published his study marking the discovery of the bunker ants in 2016, he cited the split colony as evidence of wood ants’ remarkable perseverance. But the general populace was less awed and more concerned. “Professor Czechowski got many letters saying how cruel it was to keep the ants down there,” Maák says. “People kept asking why we did not set them free.”

In most cases, the cardinal rule of wildlife conservation is to not intervene. David Attenborough, the voice behind Planet Earth and the field’s unofficial patron saint, is a staunch believer in this rule, according to The Sun. Maák says he grappled with this ethical dilemma, but his colleagues reasoned that they were not interfering with the course of nature because the ants had been trapped in a human-made structure. Plus, the researchers had learned what they could from the bunker ants, and wanted to study them further—as a united colony with an unusual duplex living arrangement.

And so, out of both compassion and scientific curiosity, Maák devised a plan. Before he could unite the colonies, he had to check if they would recognize each other. If not, the resulting carnage could wipe out both populations. Wood ant colonies each carry a hydrocarbon profile that’s as specific as a barcode, and ants will scan this to see if a newcomer is a friend or foe. In spring 2016, he took a group of around a hundred ants from Colony Two to Colony One, and let them scramble toward the mother nest. The ants were not attacked, and quickly—and perhaps with no small measure of relief—reimmersed themselves in the mother ship.

Maák’s solution would allow ants, after falling, to climb back up to the original colony. He calls it an “experimental boardwalk,” a term that conjures images of a flea circus of the future. It is some wooden planks. Maák’s colleagues installed the boardwalk just after the first trial encounter in 2016. A few ants hobbled over to inspect it.

Maák’s day job is, regrettably, not exclusively devoted to the study of these ants. So he left to conduct other research. When he returned in February 2017, Ant Colony Two was gone. The necropolis remained, but the swarming black mass had disappeared. A few lone ants wandered around the base of the boardwalk—presumably only the recently fallen.

According to Maák, the most significant implication of this research is how wood ants will maintain colony organization in even the most dire circumstances, in total darkness with no food save each other. “They couldn’t predict that we would come in to save them, but they were still surviving and fighting for something,” Maák says. “And that is exciting.”

How a Coffee Blend Defined an Era of Israeli Politics

Help us keep them coming by directly supporting Atlas Obscura.
Become a Member
$5/month $10/month $20/month
See All Membership Options
Already a part of our membership program? Sign in.
No Thanks
Keep Exploring
lenin

The same machine that popularized "The Oregon Trail" was secretly imported just a few years before the USSR collapsed.
soviet architecture

The treatments are no longer mandatory, but they're still available.
nature

The Secret to This Brazilian Coffee? Ants Harvest the Beans

The insects' trash is one farmer's treasure.
bunkers

And meet the determined enthusiast bringing them back to life.
Video

How to make the invisible visible.
Read more
Thanks for sharing!