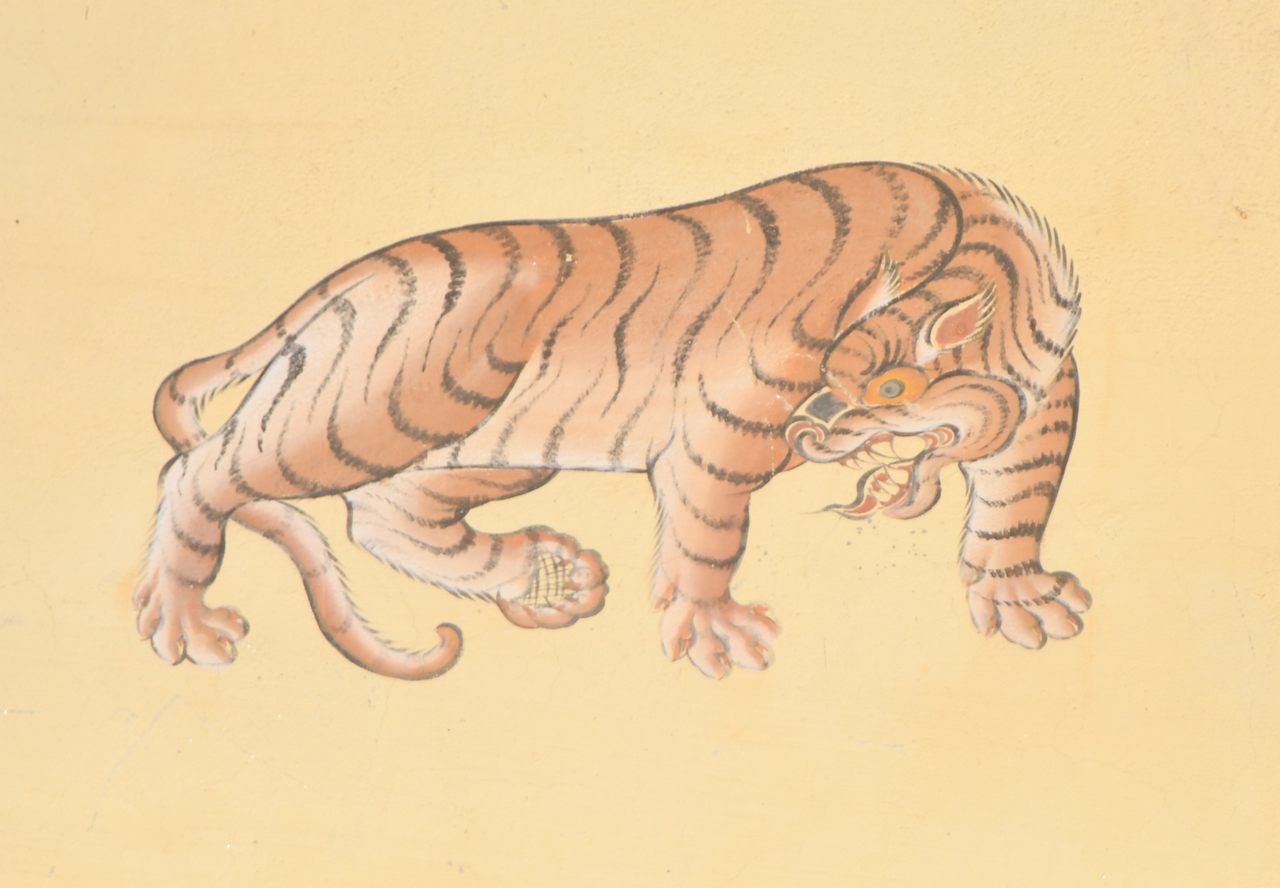 A tiger painted on a building in Thimphu; tigers are particularly revered in Bhutan. Courtesy Martin Gilbert
In This Story
Destination Guide

Martin Gilbert watched steep, green hillsides flash by as his plane descended in a narrow, winding valley to reach the airport for Bhutan’s capital city, Thimphu. The route is considered one of aviation’s most dangerous approaches but Gilbert, a veterinarian who studies wild carnivore diseases for the Cornell University College of Veterinary Medicine, is no stranger to remote locations and peril.

Gilbert began planning his trip to Bhutan the minute he heard the news. One of Bhutan’s rare, high-elevation tigers was wandering the outskirts of Thimphu in daylight—strange for a nocturnal animal—and so dazed that it ignored eager residents as they approached for a photo. Gilbert knew these symptoms well. He’d seen them before, in Russia’s Far East, in tigers infected with canine distemper virus. If the highly infectious virus took root in Bhutan’s wild tigers, it could be disastrous for the small population of roughly 100 animals, which live at elevations up to 11,000 feet.

Even worse, if canine distemper turned out to be widespread in tigers, there would be global consequences. There are only about 3,500 wild tigers left in the world. They are primarily threatened by poaching and habitat loss, but Gilbert believes that disease has the potential to snuff out small populations—and these days, most tiger populations are small. Gilbert flew to Thimphu in 2018 because he needed to know whether the disease had established a toehold among Bhutan’s tigers. Together with colleagues from Bhutan and around the world, he would find an answer that led to a new puzzle, and new partnerships that continue today.

After the plane landed, Gilbert was met by veterinarian Yoenten Phuentshok, a tall, dark-haired man wearing a gho, Bhutan’s traditional, knee-length robe. Phuentshok usually focused on domesticated animals at the National Center for Animal Health, but had stepped in to help with the strange tiger case, covering for a wildlife veterinarian who was on maternity leave—coincidentally his wife, Kinley Choden.

Phuentshok had his own ideas about what was ailing the tiger. He had been dealing with widespread tapeworm infections, fatal to young yaks, that had reached crisis levels. The symptoms of the infection, known as gid, were similar to what Phuentshok had seen in the tiger—an animal that enjoys a special status in the country.

“The tiger is quite an auspicious animal in Bhutan,” Phuentshok says. It’s one of four animals revered in the country’s Buddhist traditions. None of the others—the snow lion (not to be confused with the snow leopard), the mythical, bird-like garuda, and the dragon—can be seen in Bhutan today, he adds. The people of Bhutan have so much reverence for tigers that the animals are referred to as Azha Tak, or “Uncle Tiger,” specifically a maternal uncle, which in Bhutan carries greater attachment and respect.

When the Nature Conservation Division’s chief forestry officer, Sonam Wangdi, saw the tiger photos on Facebook one morning in March, he scrolled right past them, thinking they were from someone’s vacation in India. As the public started calling his office, he realized that this tiger was just six miles north of Thimphu.

The tiger eluded his division’s experienced animal rescue team for more than a day and they continued the search into the night by flashlight. On March 22, at two in the morning, they found the tiger lying on a heap of beer bottles, Wangdi says. It was a huge male.

After the tiger was brought to the rescue center, it ate a goat carcass and drank well, according to local media. “That day, the tiger was pretty healthy, actually,” Wangdi says. Soon, though, the tiger began circling its enclosure, clockwise. It shook its head, rubbing and pressing it against parts of the enclosure.

“We googled the symptoms and came across scientific papers describing tigers in the Russian Far East. The symptoms were similar, and there were examples of those tigers coming into town,” Wangdi says. “We were scared that this tiger was infected with canine distemper virus, because it’s highly infectious. Other tigers would be at risk.” Another wildlife veterinarian and researcher, already in Bhutan for an unrelated project, advised the team on medications for the tiger—and told them that they should contact Martin Gilbert.

Meanwhile, a government minister arranged for one of Thimphu’s many monasteries to conduct a Buddhist ceremony for the tiger. The head monk there told Wangdi about a scripture just for the animal’s well-being, “a prayer to prevent misfortune to a tiger.” A photo of the tiger was placed on the monastery’s golden altar, along with flowers and bowls of fruit. About 100 red-robed monks chanted to prevent the tiger’s misfortune in a ritual that lasted an entire day. Wangdi joined the monks in their prayers for about an hour.

All of the medical and spiritual efforts still were not enough. Two weeks and a day after it was captured, the tiger died.

At the animal rescue center, necropsies, or animal autopsies, are performed outdoors, Choden says, in an unlit space behind a taxidermy workshop. “We want it to be away from the other animal enclosures,” she says. While other necropsies could wait until daylight, this one had to be done immediately: The team had to know whether whatever killed the tiger was contagious.

Lights were brought in, and Choden’s parents came to take care of their infant grandson so she could lend her expertise to the postmortem. She and Phuentshok were part of a large team that examined the tiger, piece by piece, inside and out. It was cold outside in the middle of an early spring night in Thimphu, and the work was tiring. Choden remembers marveling at the massive size of the tiger’s head and paws.

“When we finally opened the skull, that was the eureka moment,” Phuentshok says. The team found a pale, coin-sized blob: a cyst, the larval stage of a tapeworm. They would find another cyst on the other side of the tiger’s brain. The discovery confirmed what Phuentshok and some of his colleagues had suspected all along*.

The team worked until dawn. Because it was a tiger and the circumstances were unusual, the carcass was frozen. “It took up a whole freezer,” Choden says. And there the tiger waited for Martin Gilbert.

By the time Gilbert’s plane touched down on the runway, it seemed like the mystery of the tiger’s death had been solved. But Gilbert had worked on many other puzzling animal illnesses, and too often had seen contributing factors overlooked. He had to be certain. When Gilbert got his sliver of frozen tiger brain back to the lab at Cornell, it confirmed what Phuentshok first thought: This tiger did not have canine distemper.

Parasite experts at the University of Zurich in Switzerland, also assisting in the case, reported that the cysts found in the tiger’s brain belonged to a species of tapeworm that had a two-stage life cycle, alternating between human and pig hosts. How this particular tapeworm got into a tiger is still unknown.

Wangdi says that the tiger case made people in Thimphu aware of the importance of wildlife health, and was a factor in his ability to expand the number of wildlife rescue teams from one in the capital city to 24 teams across the country. Finding a tapeworm with human and porcine hosts in a tiger illustrates the connection between human health, domestic animal health, and wildlife health, he adds.

The scientists, veterinarians, and laboratories that came together to solve the tiger mystery built lasting relationships, Gilbert says. He’s currently working on a project monitoring dholes, an Asian wild dog, with someone he met through the case. Wildlife veterinarians from across Asia who came together to consult on the tiger case are now working as a group to advise on an illness affecting Nepal’s rhinoceros population.

The tiger left one other legacy: With Gilbert’s encouragement, Phuentshok and Choden wrote a case study, published in a parasitology journal in 2021 and available for the next wildlife veterinarian faced with a sick tiger and a lot of questions. In that way, solving the mystery of the roof-of-the-world tiger is a beginning, not an end. Gilbert says, “We don’t know as much as we think we know about tiger health.”

* Correction: This post previously suggested Phuentshok was the only person to suspect a tape worm infection; a number of other team members also saw it as a possibility.

A wildlife ecologist specializing in large carnivores unfolds a mystery for listeners.
Video • Object of Intrigue

1:34
Sponsored by Visit St. Pete/Clearwater
Want to see fewer ads? Become a Member.
From Around the Web
Atlas Obscura Trips
Festivals and Temples of Bhutan
View This Trip
Thanks for sharing!