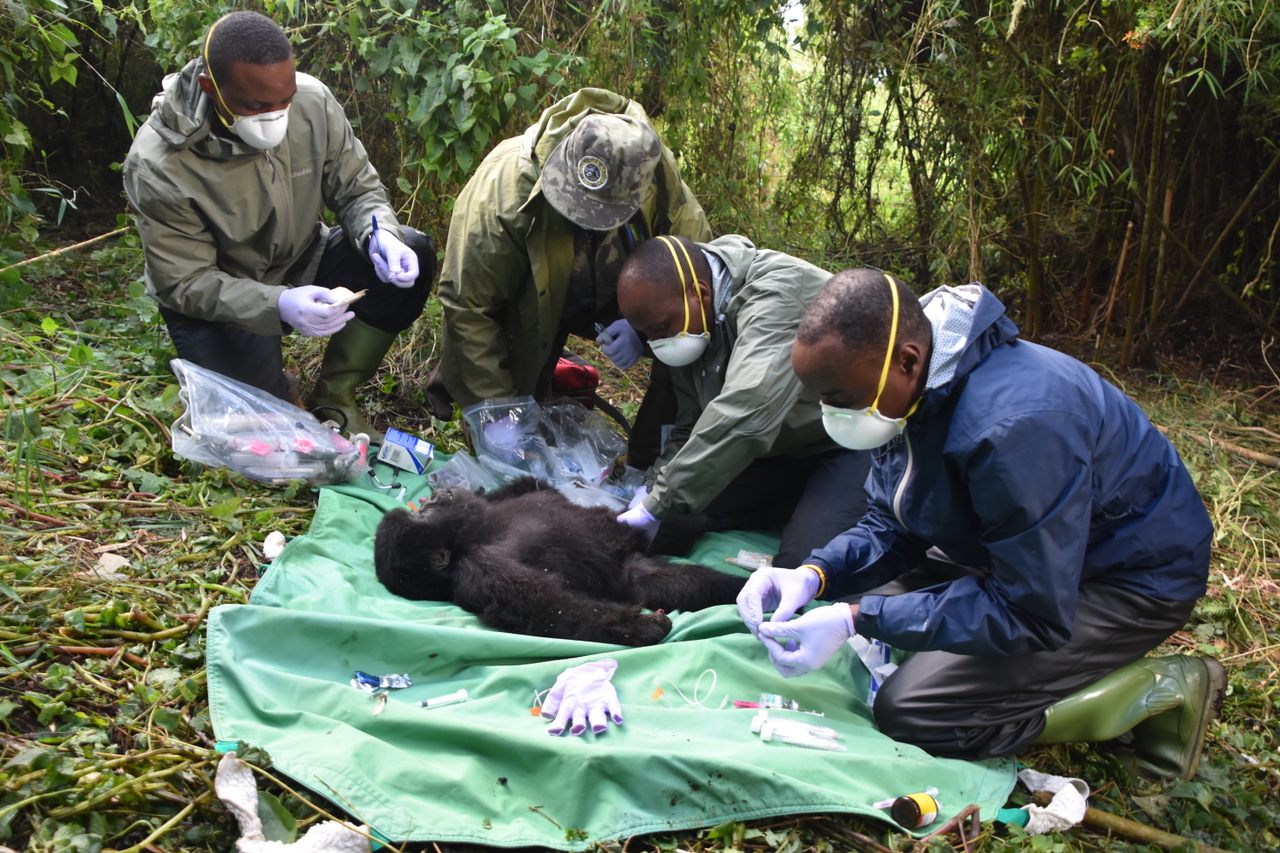 A team from the organization Gorilla Doctors removes a snare from an anesthetized infant mountain gorilla in Rwanda's Volcanoes National Park. © Gorilla Doctors
In This Story
Destination Guide

In eastern central Africa, the Virunga Mountains stretch across the borders of Rwanda, Uganda, and the Democratic Republic of the Congo as a line of formidable volcanoes rising above verdant forest. This is the home of the critically endangered mountain and eastern lowland gorillas made famous through the work of the late primatologist Dian Fossey. Today, the gorillas of Virunga continue to face threats from poaching, habitat destruction, climate change, and other human activity. There is reason for cautious optimism, however: The numbers of some populations have increased over the last decade, thanks largely to a dedicated conservation effort that includes the men and women of Gorilla Doctors.

The organization’s wildlife veterinarians head out into the field regularly, accompanied by armed rangers, to monitor the animals’ health and conduct life-saving interventions when needed. Trackers guide them through thick mud, dense forest, and heavy fog to different gorilla family groups that are always on the move. Once within sight, the vets conduct observational health checks of each member. Anything from coughing and a runny nose to a problem moving or lack of appetite may alert the team to the need for a closer look. Sometimes the problem is more obvious: Gorillas, particularly juveniles and infants, can become tangled in wire snares set for game animals, leading to serious and sometimes deadly injuries. The vets keep field kits prepped and ready to deploy for these critical cases, packed with antibiotics, glucose and other IV fluids, anesthesia, dart guns, painkillers, and other supplies. There’s even a portable X-ray machine on standby, ready to be carried wherever it’s needed.

The work the teams do is difficult, dangerous, and sometimes heartbreaking, but it can also be deeply rewarding, according to Jean Bosco Noheri, known as Dr. Noel. He joined the Gorilla Doctors’ Rwanda team as an intern in 2009 and is now one of 10 field veterinarians in the organization. Like most of his colleagues, Dr. Noel is from the region. He grew up just two hours from Volcanoes National Park, in the Virunga Mountains, where he now works.

Atlas Obscura spoke with Dr. Noel about what it’s like to be a field veterinarian caring for these remarkable primates.

How often do you and other veterinarians head out into the field?

We do health checks on each gorilla family at least twice a month. When there are health issues we decide whether the animal needs an intervention—carried out only in life-threatening cases—or if it can be monitored until the issue is resolved.

What goes through your mind when you’re faced with doing an intervention?

It’s very stressful. You’re not sure what might happen because it involves your team, the gorilla group, the weather, the forest. Is it too muddy? Is the group aggressive? There are several factors to consider in the beginning. Then once you finish, you’ve done what you could have done. The next morning you come and the gorilla is doing really well. You just feel like, wow.

What has been the most challenging moment of your career?

Every case is challenging. To be memorable, it must be challenging. We had a case where a baby had a snare around the neck. The group had several aggressive silverback gorillas. We had a very supportive team of trackers helping us, but we’d been trying unsuccessfully to treat the baby for a few days. We felt the baby was dying, and we thought, let’s make it work. Everyone would do whatever it would take.

We reached the group around 7:30 in the morning. The family was in the nest sleeping, and I thought, wow, we have a chance! So, we prepared the drugs. A silverback approached and was watching us so we had to sit there and do nothing. We waited until they moved from the nest and we tracked the group until noon, not talking. They became suspicious and started monitoring our movement, so we couldn’t make any move at all. Around 2 p.m. the gorilla group was attacked by bees and moved uphill.

We had the opportunity to dart around 4 p.m. We had to have two veterinarians darting at the same time because it was a baby: It would require anesthetizing the baby and mother gorilla at the same time. The female was lying down holding the baby on her chest. Darting was very risky because if you miss the mother and dart the baby, it’s too toxic so you’ll likely kill the baby. If you inject the baby medicine into the mom it doesn’t work because the dose is too small.

When we darted, the female dropped the baby and ran away. We sent teammates to look for the female but the whole gorilla group had moved away from the site. The baby had necrotic tissues that were turning black; we took it as a sign the baby would die if nothing was done. We removed the dead tissue, injected antibiotics and painkillers, took samples, and applied local antibiotics.

The next challenge was how to get the baby back to the group, which had moved far away. One team member sacrificed his rain poncho to carry the baby in. We walked for an hour to get to the gorillas and it was already dark. At that moment, we didn’t know where the female was.

We placed the baby 100 meters (330 feet) from the gorillas. When it woke up, the baby was screaming. The adult gorillas came and smelled the drugs we had administered and left the baby. Surprisingly, after about 30 minutes, the female came back. She smelled the drugs as well, but she picked up the baby, put it on her back, and left. We got to save the baby and because of her maternal instinct, she accepted it. All our cases are about saving life. We save one gorilla at a time.

In Bhutan, a Rare Tiger's Mysterious Illness Had a Surprising Source

Local vets collaborated with an international team to figure out why the animal was dazed and wandering near the capital city.
science

A conservation biologist in Argentina once hosted one of the animals in her living room, but finding them in the wild has proven far more difficult.
animals