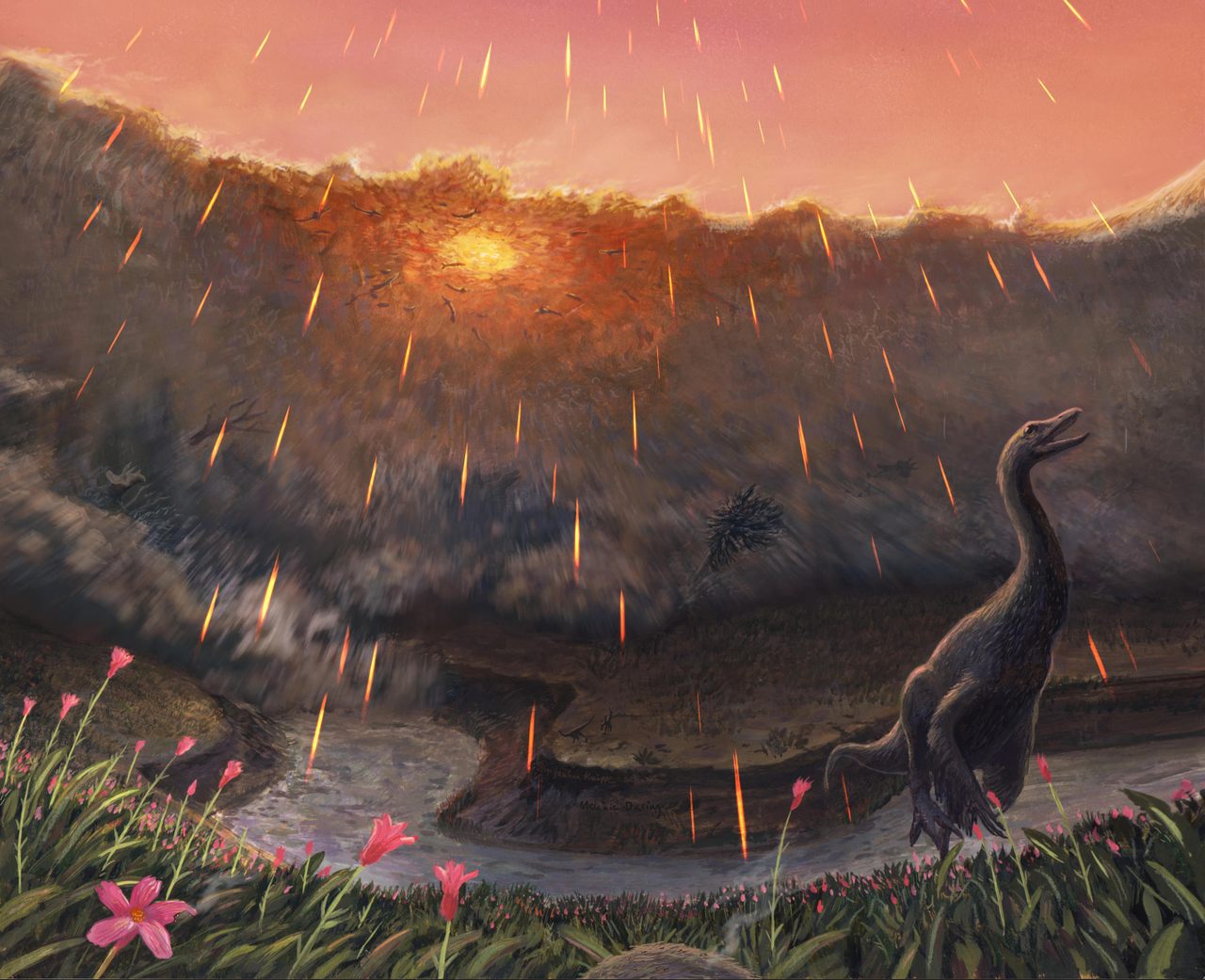 Spring was in full swing along the Tanis River that day. It curved lazily through forest and wetland on its way to the Western Interior Seaway, a shallow sea several miles away that covered much of what is now North America’s Great Plains. Winter’s chill, when temperatures dipped to just above freezing, was a distant memory, but the full heat of summer had not yet arrived. Plants were budding or starting to bloom, and turtles rested along the river banks, taking what warmth they could from the sun. The river was thick with fish, including animals similar to today’s paddlefish and sturgeon. They foraged for tiny plankton along the riverbed with their elongated snouts, or rostrums, and whisker-like barbels. Plankton numbers would not peak until summer, but there was still plenty to go around, and the fish were plump and healthy. About 66 million years ago, life was good that day. Until, say researchers behind a new paper, it wasn’t.

“It was like throwing a bowling ball into a sandbox,” said Uppsala University paleontologist Melanie During, describing in a recent press call what she and her colleagues believe happened 2,000 miles to the south on that spring day. A city-sized meteor slammed into Earth, clipping what’s now Mexico’s Yucatán Peninsula. A cascade of cataclysmic events occurred in seconds and minutes, including the ejection of particles of molten rock so far into space that some, said During, “may have even circled the Moon.” The material in these particles crystallized in a way that simply doesn’t happen within the confines of our atmosphere, forever recording their violent, long-distance trajectory. Then, the particles, called tektites or impact spherules, began to fall. They rained back down on the planet, onto the trees around Tanis River and into the water itself, lodging in the fishes’ gills.

Less than an hour after the meteor punched the Chicxulub Crater into Earth’s crust, During and her colleagues believe, the foraging fish were dead. A huge seiche—a wall of water kicked up by the global rattling from the impact, like a wave in a swimming pool during an earthquake—collected the bodies of the fish, turtles, other animals, trees, and more, and dumped it all at a sandy spit that jutted out into the river. And there they remained, buried by more falling tektites, sediment, and a layer of the metal iridium that can be found around the world, like a funeral shroud over evidence of what’s known as the end-Cretaceous event: The mass extinction that snuffed out an estimated 75 to 80 percent of all species, including the last of the non-avian dinosaurs, 66 million years ago.

“It’s like a car crash frozen in place,” During said of a distinctive layer of fossilized carnage at the site known as Tanis, in North Dakota. “It’s the most violent thing I have ever seen.”

During and her colleagues noted the cataclysmic sequence of events as part of a paper published in Nature, which pinpoints the Chicxulub impact to the middle of spring in the Northern Hemisphere. The researchers analyzed fish fossils as well as tektites lodged in the animals’ gills that show “they were buried alive,” said coauthor Jeroen van der Lubbe, a geochemist at Vrije Universiteit Amsterdam. Not everyone in the field agrees with the doomsday scenario the new paper is based on, however.

Paleontologists not involved in the research applaud the team’s approach and general conclusions about what killed the fish, but also voiced concern that it’s built on the assumption that the material from the Tanis bone bed was deposited in the immediate wake of the end-Cretaceous event; lead author During went so far as to say she’s confident the animals died within an hour of the distant impact. Other researchers who study what happened at the K-Pg boundary—shorthand for the moment in geological time when the Cretaceous ended (with a bang) and the Paleogene period began—are less certain. They don’t question the mass death and seiche that piled the bodies, but believe it could have been the result of a smaller, more localized catastrophe. Their concern over the new findings is that they rest on another paper—a controversial one that has not yet been fully accepted by the field.

“I totally buy that these fish died in the spring. I think the authors of this paper did a really good job on that,” says Tyler Lyson, a vertebrate paleontologist at the Denver Museum of Nature and Science. Lyson is not part of the team behind the new paper, but is familiar with it. He has also done extensive fieldwork in the Hell Creek Formation, a famously fossil-rich area that spans the intersection of the Dakotas, Montana, and Wyoming, and includes layers from the K-Pg boundary.

The Tanis site is part of Hell Creek, but Lyson, whose research focuses on the extinction of the dinosaurs and subsequent proliferation of other animals, is concerned that the new paper assumes the Tanis bone bed represents the K-Pg “kill layer,” that moment of mass death on, he says, “the single worst day for multicellular life on Earth.

“I think there’s still a lot of doubt about that,” says Lyson, who believes the fish and other animals may have been killed in a regional event not related to the Chicxulub impact. “It could be [from Chicxulub], but we’re still all waiting for more data…. Because it’s either the fish died in the spring, or the fish died in the spring when the asteroid struck. Those are two very different conclusions.”

The new research is not the first to suggest the dinosaurs’ doom came in the Northern Hemisphere springtime—another team’s paper, published in late 2021 in Scientific Reports, a sister journal to Nature, made a similar case based on similar material from the Tanis site.

Van der Lubbe said the two teams arrived at their conclusions independently, and that his team’s work is unique because it includes analysis of osteocytes, tiny pores or cells within the fish bones, that reveal additional information about the animals. Based on the regular patterns of growth preserved like tree rings in their bones, the fish from the Tanis site were in good health, and had not endured famine or drought before their sudden death.

But both papers, as well as other research on the Tanis site, build on a 2019 paper published in Proceedings of the National Academy of Sciences that confidently claimed Tanis was a “snapshot … of the immediate effects of the Chicxulub impact.” The lead author of that paper, and of the 2021 Scientific Reports paper, is Robert DePalma, a young paleontologist who was the central character in a lengthy story published by The New Yorker a day before his bombshell 2019 paper. Numerous paleontologists worried that DePalma’s bold claims had not yet been vetted with scientific rigor; the young researcher’s apparent reluctance to open Tanis to more scrutiny by other teams only heightened that skepticism.

Lyson and some colleagues have examined other blocks of fossilized fish, taken from the Tanis site before DePalma began work there a decade ago, and they failed to find a single impact spherule, the tiny, telltale tektite upon which much of the mass extinction “snapshot” theory rests. Summing up what other researchers have said privately, Lyson says that the initial 2019 paper is “a really good paper,” but, “everything about this (Tanis) locality is just bizarre. What I would like to see is more evidence that this is the K-Pg to begin with.”

He adds that he understands the desire for the core Tanis team, including DePalma, to protect their own research interests, but that “it would be nice for other scientists to go to this locality and have a look and collect their own samples. To have different folks with different eyes, because we’ve all seen different things from different K-Pg boundaries all around the world and we’re all experts in different areas.”

Lyson is also skeptical about some of the conclusions in the new paper, including the suggestion that the Chicxulub event’s occurrence in Northern Hemisphere spring—when many animals would be “out and about,” as During put it, actively foraging and reproducing—played a role in which species survived the mass extinction.

“I don’t really buy that,” Lyson says, adding that the pattern of the species around the world that survived the mass extinction has nothing to do with seasonality. Instead, smaller animals with slower metabolisms, and that lived underground or underwater, seemed to have had the best chance of enduring, regardless of which hemisphere they called home. These animals were shielded from much of the initial devastation from the asteroid impact. They also had lower energy needs, allowing them to survive a period of harsh cold and limited resources that resulted from particles blocking out the sun in what During called “a nuclear winter of unknown duration.” Species that did make it through this grim period included several mammals, and the end of the dinosaurs’ reign is widely accepted as leading to the rise of mammals, which quickly evolved to fill vacant ecological niches.

Lyson hopes more researchers will be able to access the Tanis site and conduct their own analysis to verify the work done there by DePalma and others. If proven to be a snapshot of the K-Pg boundary, Lyson says, “I think it’s really cool. I think it’s amazing to think that we could know what season this extinction was.”

“It’s such a critical interval of time,” he adds. “If it hadn’t been for that fateful day, we wouldn’t be here … there’s no doubt about that.”

Update: Following publication of the story, paleontologist Robert DePalma stated via email that researchers from a number of institutions have conducted fieldwork at the Tanis site, and that all research there has been undertaken following the standards of the field.

The monstrous menace known as Whatcheeria hints that our distant ancestors may have been more like us than we thought.
Video • Object of Intrigue