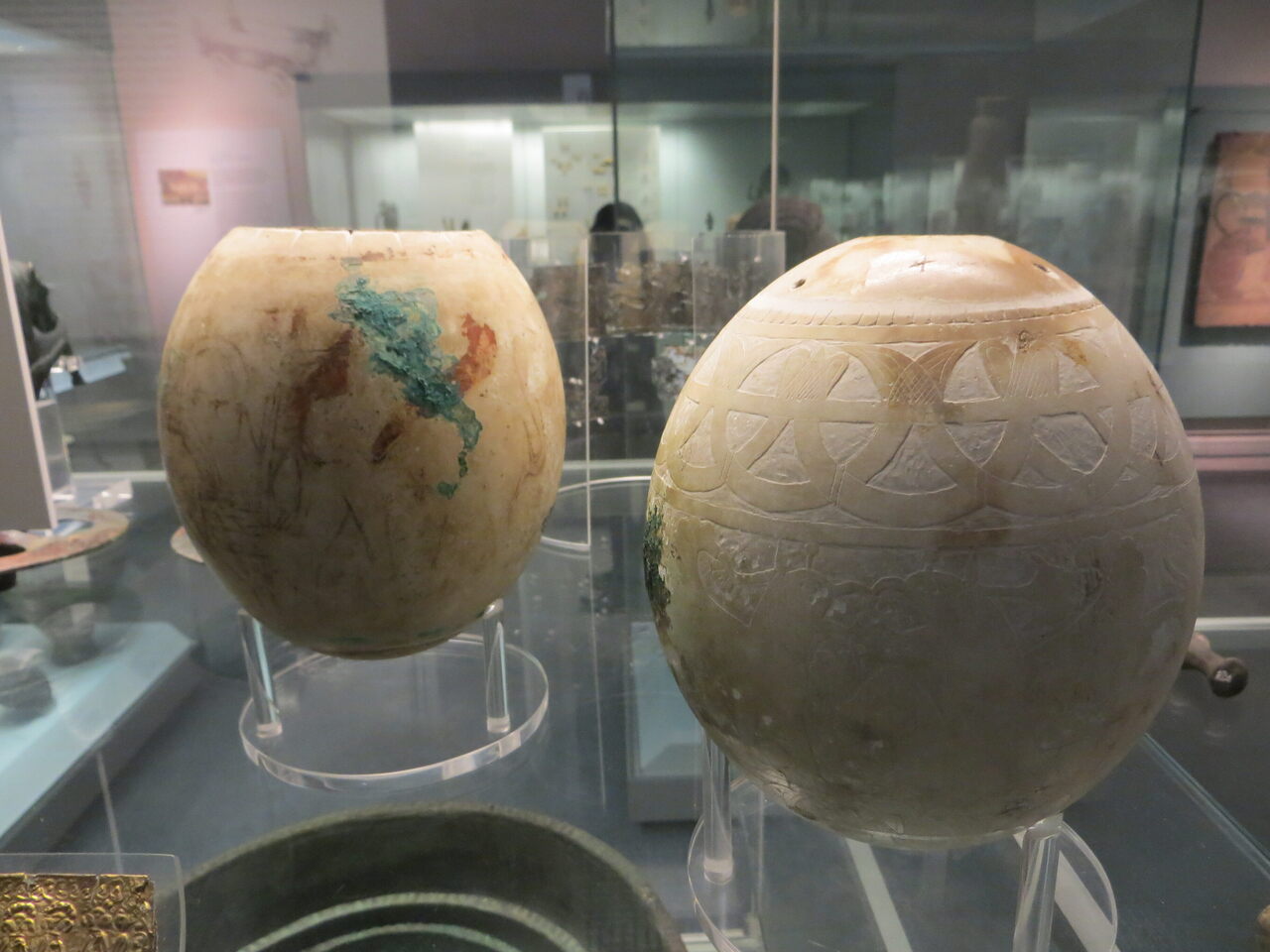 In all of the finds from all the ancient treasure hoards and tombs from Mediterranean civilizations that have turned up over the years, there’s a peculiar outlier. Among many, many funerary amphorae, pieces of gilt armor, and enticing piles of coins, there are also decadently carved eggs from the world’s largest extant bird: the ostrich.

The human relationship with these eggs dates back 60,000 years in South Africa, where ostrich eggshell fragments have been found in places occupied by humans. They had a use as food—after all, one ostrich egg is the equivalent of two dozen from chickens—but also provided a durable, attractive canvas for human art. In the Bronze Age, large, intact eggshells were decorated with carved motifs of animals and warriors, painted accents, and metal inlays, and placed in tombs or used as ornamented goblets by the ruling class. For decades archaeologists have wondered just how these gigantic avian baubles came to be. Were the ostriches farmed? How did ancient Greeks and Spaniards get their hands on delicate, perishable goods from the Middle East and Northern Africa? And once acquired, how were the eggs crafted and decorated?

No ostrich egg workshops have been identified in the archaeological record, and their bones aren’t found at ancient sites, further obscuring how eggs were sourced and then made into dazzling works of art.

But the hunt for more information hasn’t all been a wild goose chase, as a recent study published in the journal Antiquity suggests. A British and German team set out to analyze five whole ancient ostrich eggs and innumerable ancient eggshell fragments in the collection of the British Museum. (So large are the eggs that the scanning electron microscope they used had to be customized, and even then there were problems.)

The recent study also made use of modern ostrich eggs, for comparison—and for protein.

“It makes a lot of quiches, cakes, and omelets to keep you going in the basement of the British Museum while you’re looking at a scanning electron microscope,” says Tamar Hodos, an archaeologist at the University of Bristol and lead author of the new paper. “We ate well for three days down there.”

The results suggest a far-reaching geography to the ancient ostrich egg trade, as well as a complex chain of production. “We’ve just tended to focus on ostrich eggs turning up in elite graves, among the consuming cultural group,” says Hodos, “But not so much from the perspective of the producing groups.”

Today, an ostrich egg costs about as much as a boozy brunch for one. But in antiquity, the carved eggs were luxury goods, status symbols for the Mediterranean elite. Rulers and aristocrats worth their salt, from Assyria to Etruria, all had at least a few of them. To hash out how they made it around the Mediterranean, the scientists had to get molecular.

Ostrich eggs are rather like trees. Both are organic and grow, soaking in information about their environments as they do so. Using a triumvirate of oxygen, carbon, and strontium isotope analyses, Hodos’s team picked apart the climates in which the eggs were nurtured, and found that the eggs really got around.

“High-resolution microscopy has hardly been used for this region/periods,” says Philipp Stockhammer, an archaeologist affiliated with the Max Planck Institute for the Science of Human History in Germany who specializes in organic residue analysis. “It has been used a lot for Stone Age stone tools, but hardly for later periods, and Tamar shows the unique potential this method can have.”

At that level of analysis, it’s possible to tell the difference between wild-caught and farm-raised ostrich eggs. Farmed ostriches lay eggs that tend to be smooth, while wild eggs, on the other hand, have microscopic ridges, which Hodos believes are indicators of environmental stress.

Hodos’s study suggests that the ancient decorated eggs were sourced from the wild, which meant that they would have commanded a higher price than if they had been farmed. All of this suggests a vast supply and production line—chaine operatoire, to use a term of art—that fed the luxury market.

“You’ve got some schmuck who’s being sent to go track the ostriches to begin with, and has to then try to steal eggs from a vicious beast that will kill you with a single kick or a peck of it’s really sharp, nasty beak, and then bring them back, blow them [to remove their contents with the shell mostly intact], and then you have to let them dry out for an extended period of time before your artist can start crafting them,” Hodos says.

After that, she adds, there’s the challenge of perhaps fitting the eggs with metal accoutrements, sending them to port, transporting them across the sea, selling them to another merchant, and having that final seller convince a noble, probably speaking another language, to part with their own wealth in exchange.

“This is a shared understanding of bling, of what it means to be rich,” Hodos says. “It’s a really complex chain of operations in this luxury production industry.”

In a modern era in which we can have digital house parties with 20 friends scattered across the globe, it can be hard to imagine that the ancient, internet-less world was all that “connected.” Though it might have taken a little longer to make its connections, the ancient Mediterranean region was just that—a network of cultures and civilizations exchanging ideas and, evidently, eggs.

“We must not underestimate the connectedness in the past,” Stockhammer says. “For me, the second millennium BC Eastern Mediterranean was a globalized world.”

Social Distancing Is Bringing Drive-In Theaters Back to Life

If it weren't for aerial surveys and lidar imaging, Aguada Fénix might never have claimed the superlative crown.
caves

For skeptics, no amount of crab legs and speared shark are enough to upend the caveman stereotype.
ancient

An Ancient Ballcourt in Oaxaca Expands a Sport’s Footprint

3,000 years before the Aztecs, Mesoamericans were already playing ball.
islands

The token-size stones offer insight into life 20,000 years ago.
Video • Object of Intrigue

From Kushites to Christians, an old site in Sudan has new stories to tell.
Read more
Thanks for sharing!