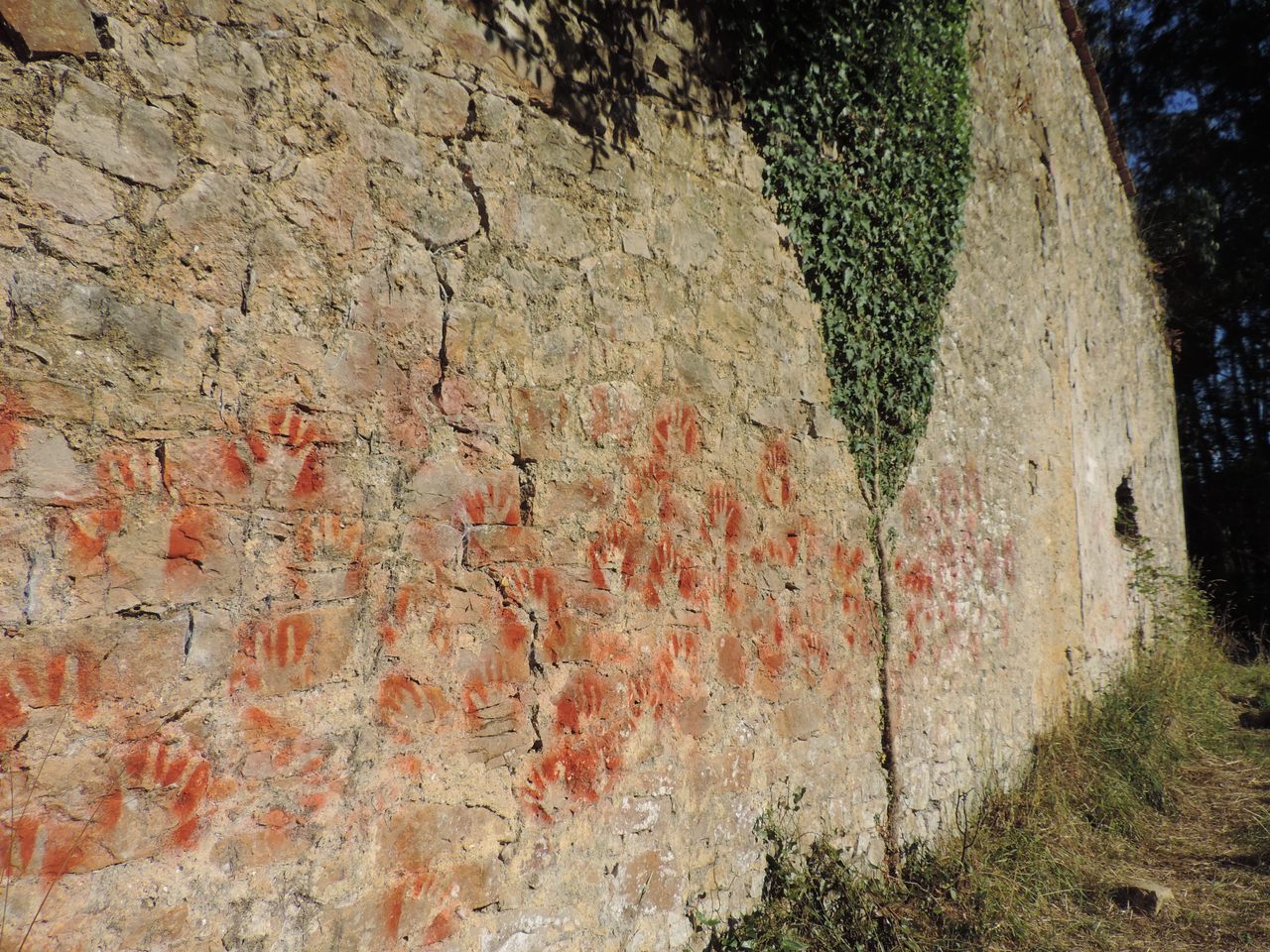 Volunteers' handprints cover a limestone wall, part of an experimental archaeology project to understand how ancient humans left their mark in caves throughout Spain and France. Verónica Fernández-Navarro
In This Story
Place

The walls of these four caverns are filled with art that dates back to the earliest human presence in Europe.
Destination Guide

On a breezy summer day just outside Santander in Spain’s northern Cantabria region, a group of children and adults gather around a 12-year-old girl. She presses her hand against an outcropping of gray limestone as a woman leans in, holding a straw to her mouth. The woman exhales sharply and blows ochre pigment over the girl’s hand. As the girl steps back to admire the outline her hand left on the rock, an eager eight-year-old boy walks up, cracking his knuckles, ready for his turn.

The scene might be mistaken for a children’s outdoor art workshop but for the three researchers documenting it all with high-end cameras. The archaeologists also measure the handprints and log them with notes on the age and gender of each volunteer. This exercise in experimental archaeology echoes activities in the region’s deep past: Similar handprints, some estimated to be more than 40,000 years old, can be found in several local caves—and, say the authors of a recent paper in the Journal of Archaeological Science, a good share of them, like other ancient handprints found around the world, were made by children.

A 30-minute drive from Santander, through verdant countryside peppered with cider houses, orchards, and timbered villages, is El Castillo, a richly decorated ancient cave that humans have frequented for the last 150,000 years. Cold Atlantic rain and gusty winds often sweep across the region, making it easy to imagine why ancient humans took refuge—and created art—inside the cave. Some of the art is so old that scientists have yet to determine who made it. Neanderthals were present in Cantabria until about 44,000 years ago, roughly the same time Homo sapiens arrived.

El Castillo itself feels like a sacred temple. People speak in hushed voices, treating the artworks with reverence. The cave’s numerous paintings feature a menagerie of deer, bison, goats, dogs, and mammoths, as well as abstract patterns of dots and lines that have been dated to at least 40,800 years ago. The cave also contains a rich and varied assortment of handprints and hand stencils, many of which are notably small—so small, in fact, that they were almost certainly made by, or with, children.

This isn’t a unique archaeological find. Ancient child-sized handprints have been found all over the world, from the Australian outback to the Tibetan Plateau. But Northern Spain and parts of Southern France are something of a handprint hotspot. More than 700 handprints and stencils have been found in dozens of the caves dotting the region.

Most of the handprints at El Castillo appear to have been made by adolescents and adults, but the researchers say about 20 percent of the hands stenciled belonged to children and even infants. “Because children aren’t strong enough to be able to blow the pigment over their own hands, this tells us that they must have been assisted in handprint and hand stencil making by adolescents or adults,” says Verónica Fernández-Navarro, a University of Cantabria archaeologist and a coauthor of the recent paper. With her coauthors, University of Cantabria colleague Diego Garate and Edgard Camarós of the University of Cambridge, Fernández-Navarro developed a methodology to estimate the age and gender of the ancient artists more accurately than ever before.

The team first spent hours scouring old and incomplete databases of previous research on the topic. They also reviewed existing photos, sketches, and some early 3D models by the HandPas Project, a research initiative to record and preserve all the cave handprints and stencils of Europe. The researchers then created the most accurate 3D images to date of handprints and stencils from El Castillo and other caves in the region—a difficult task when the art is faded, fragile, and painted on uneven surfaces. The team also made digital hand scans of 545 volunteers of all ages to provide a sample of modern hand sizes that could be compared with those of the ancient artists to estimate their age and gender.

Based on the new data, says Fernández-Navarro, “It can be assumed that hand stencil painting would not have been an activity closely linked to men and subsistence, as has traditionally been thought.” Instead, she says, women and children, even babies, appear to have been involved. The participation of the group’s youngest members suggests that making the art was connected to community, she adds. “This was likely a group activity, perhaps to reaffirm group identity or foster group cohesion,” Fernández-Navarro says. “It wasn’t some shaman alone in the cave as many assume.”

While the idea of people of all ages leaving their mark on cave walls may run counter to the conventional notion of how the ancient art was made, and by whom, other researchers in the field are not surprised. “While many contemporary societies tend to place people in age-based peer groups—daycare, high school, nursing homes—in most places and times, people have lived in extended family groups where a mixture of ages are seamlessly integrated,” says Cornell University research scientist Thomas Urban, who was not involved in the Spanish study, which he calls “fascinating.”

Urban recently coauthored a paper in Science Bulletin that reports findings of 200,000-year-old children’s handprints in a cave on the Tibetan Plateau. “There’s not a utilitarian explanation for these handprints,” Urban says. “So, what are they? I’d say we can think of them as an artistic behavior, a creative behavior, something distinctly human.” In this case, researchers don’t know what kind of human was involved; there is not enough evidence at the site to determine which species of Homo might have made the impressions. What we do know for sure, according to Urban, is “These young kids saw this cave wall and intentionally altered it. We can only speculate beyond that.”

The impressions themselves shouldn’t surprise us, adds Urban. “The brains of children, especially young children, are primed for symbolic behavior, rapidly absorbing language, ritual, myth, and other cultural symbols,” he says. “Artistic behavior resides on the same spectrum. These types of symbolic behaviors are what it is to be human, and they cannot be easily decoupled from various biological processes, such as the growth and development of the brain.”

Understanding the human instinct to create art drives the Cantabrian project, too. “Our main aim is to gain a much deeper knowledge, not of the art that these societies produced, but of the protagonists: the men and women who created these artworks so long ago,” says Garate.

The handprints also may be more than just art. The Spanish team hypothesizes that the finger positions may represent an early kind of language. “In some caves, patterns have been found. Some of the hands have missing or bent fingers, and the positions repeat in a specific way,” says Fernández-Navarro. “We want to find out if it is a code that they knew how to interpret, in the same way that today we interpret a road sign.”

Their work continues with the ongoing Mind2Wall initiative, as the archaeologists search for more signs left behind by ancient artists of all ages—and the meaning they hold.

Archaeologists test how our ancestors may have used this (nearly) lost skill to navigate caves and other dark spaces.
caves

Scores of ancient paintings and other works will soon succumb to the sea—but a passionate team is determined to preserve this 'bubble of memory.'
science

Archaeological work at Tombos reveals the stories of people who lived more than 4,000 years ago—and inspires new interest from the people who live there today.
Video

1:37
Sponsored by Explore Asheville
Want to see fewer ads? Become a Member.
From Around the Web
Atlas Obscura Trips
Barcelona & Catalonia: A Feast for the Senses
View This Trip
Thanks for sharing!