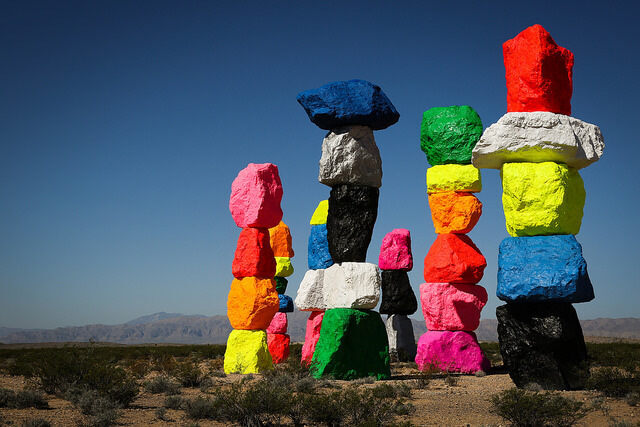 It’s easy to associate the artistic centers of the world with grand metropolitan cities, but Nevada’s vast desert landscape serves as the perfect blank canvas for artists. From sculptures to photography, there is striking art to be found in museums, warehouses, and city centers throughout the state. And that’s not to mention the creations in Nevada’s caves and beautiful desert, which have been decorated from the prehistoric era all the way up until the present day. With that in mind, here are six creative gems hidden throughout the Silver State.

In the valley below Daylight Pass, the Goldwell Open Air Museum draws surprisingly large crowds to its location in the middle of nowhere. Its “genesis piece” is Albert Szukalski’s “Last Supper,” a ghostly take on Da Vinci’s famous painting. The figures of Christ and the apostles, as well as the table, have all been removed, leaving only floating shrouds. The sculpture, installed in 1981, was predicted to only last two years at most, but it miraculously still stands, now flanked by other gigantic statues.

In an obscure patch of dusty desert ten miles outside of Las Vegas, the 30-foot-tall “Seven Magic Mountains” tower against the horizon. These neon totems are a public art installation by Swiss artist Ugo Rondinone. He used locally sourced boulders and chose this remote location (Ivanpah Valley) because it is “physically and symbolically mid-way between the natural and the artificial.”

It’s hard to say exactly what gets made inside The Generator, a communal workshop in Sparks. Aquaponic herb gardens, hot air balloons, giant dinosaur puppets, and, of course, massive installation sculptures and vehicles for the annual Burning Man festival have all come out of the workspace. The Generator and the projects made inside it are funded largely by donations and grants. Tools and labor are also volunteered. It represents a socioeconomic shift occurring in Sparks and the greater Reno area. “The Biggest Little City in the World” is being populated with innovative tech start ups. This is apparent on a microcosmic level in The Generator: artists are given a designated workspace all their own within the discrete stations for woodworking, agriculture, bronze-casting, painting, etc. and function as a hive to support one another.

World War II veteran and police officer Frank Van Zant moved to the desert outside Imlay, renamed himself “Chief Rolling Thunder” and began production on his life’s work: Thunder Mountain Monument. Using sand, cement, and scrap metal, Van Zant created a house, a three-story hostel, and a massive sculpture park. He died in 1989 and left the monument to his son, who cleaned it up and made it accessible to visitors. Some have even contributed to the monument.

Hidden behind the Las Vegas Louis Vuitton store is James Turrell’s “Akhob.” Unlike the fluorescent shelves of the designer handbag store, the art installation is a series of circular openings leading into two huge chambers filled with slowly shifting, rotating ”light fields.” Visitors are bathed in gentle, brilliant light. Vibrant hues shift imperceptibly from one to another, bleeding in and out of each other on a cycle that lasts 24 minutes. At times, the precise combination of colors makes it nearly impossible to find the door through which one just entered.

The Nevada Museum of Art is the only accredited art museum in the state, though its collection is large enough to fill several institutions. The museum has over 2,000 pieces of art ranging from the 19th to 21st century, but rather than organizing the collection by style or form, the curators present the works in a fashion that examines the relationship between humans and their environment. The pieces include everything from aerial landscape photography shot by drone to traditional paintings of women and animals in nature. Another highlight is the massive Burning Man sculptures works transplanted from the Black Rock Desert into the museum’s outdoor sculpture garden.

This post is promoted in partnership with TravelNevada. Head here to get started on your adventure.

Remarkable points of interest across the Silver State.
Sponsored by TravelNevada
atom bombs

Echoes of the hundreds of nuclear tests conducted in Nevada during the atomic age.
Sponsored by TravelNevada
abandoned

The abandoned treasures of the Silver State.
Sponsored by TravelNevada
nature

"Sky islands," secret caves, and naturally-grown bonsai trees are only a glimpse of what Nevada has to offer.
Sponsored by TravelNevada
List

4:00
Want to see fewer ads? Become a Member.
Thanks for sharing!