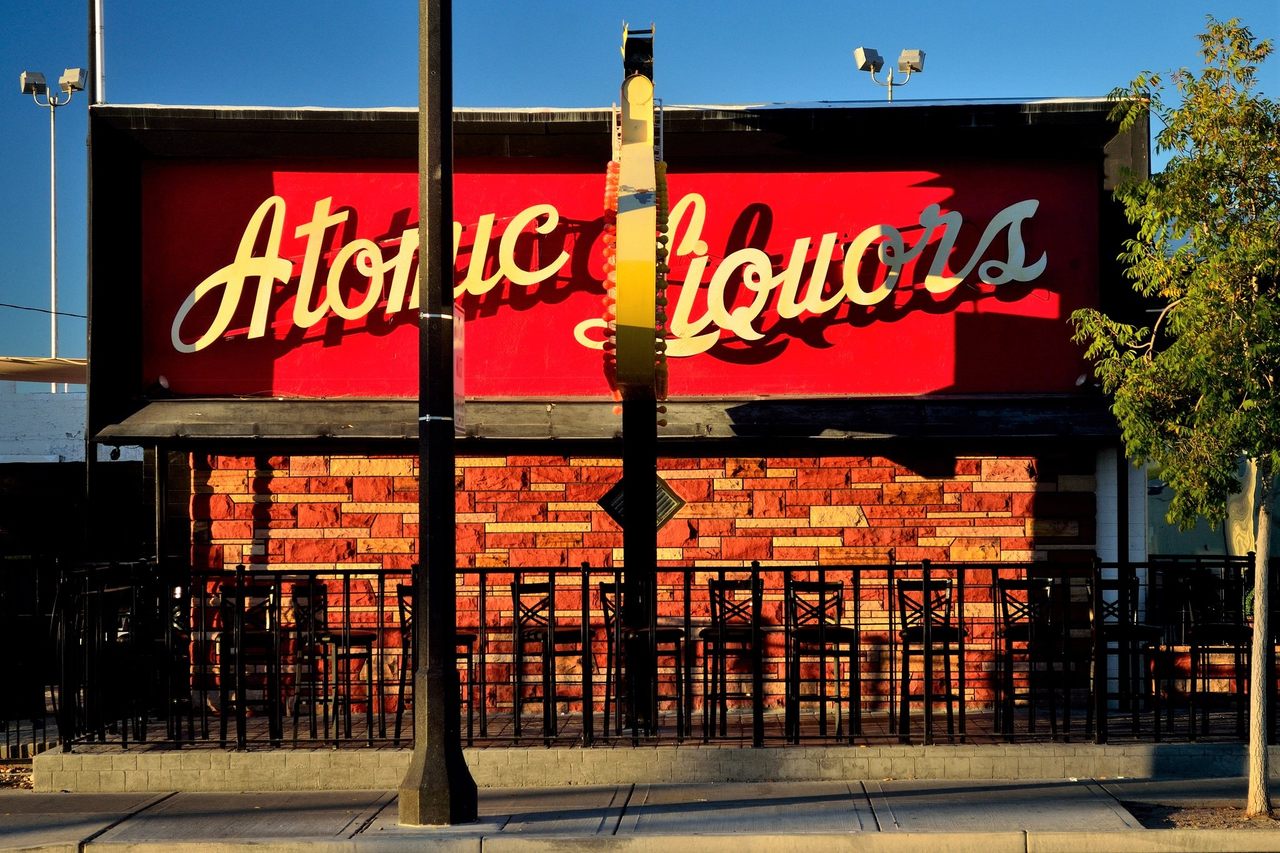 When the threat of nuclear weapons loomed during the 1950s, a whopping 928 atomic tests were performed in Nevada, mostly in Yucca Flat, a desert drainage site set aside by the U.S. government as the Nevada Test Site. This bout of nuclear experimentation also inspired a strange sociocultural movement uniquely tied to Nevada. In Vegas, there were “dawn parties” where gamblers would continue to carouse until the test signal alerted them to the impending mushroom cloud (and the end of the night). Numerous “Miss Atomic Bomb” pageants were held on the Strip, where the winner was guaranteed to be radiant.

The Cold War mercifully never turned hot, but half a century later, Nevada is left with the fallout of the atom age— literally and figuratively. Here are five spots that shaped atomic Nevada to pique your curiosity. (Please note that several of these spots are not accessible to the public, or are only accessible under particular circumstances.)

In 1955 a series of 14 nuclear test explosions known as “Operation Teapot” were set off in a swath of the Nevada desert, Yucca Flat, set aside just for this purpose. These tests were relatively common by this point, but this one was particularly memorable for the houses constructed at varying distances from the blasts to test the impact and effects of the explosions.

This cute little village was known collectively as “Survival Town”—or, somewhat less optimistically, “Doom Town.” The homes were populated by 1950s picture-perfect families (mannequins of course), bravely facing their imminent doom, frozen in their daily routines in dapper outfits. Much of Survival Town was decimated with the original blast along with other tests over the years, but some structures like the wooden house above still stand.

Tours of Survival Town and the surrounding test site are top security and in high demand, but well worth forgoing a cell phone for a few hours. They occur once every month.

The atomic age drew tourists to Nevada in droves. People would take a break from casinos on the Strip to sit in the hot desert sun, shield their eyes and watch the mushroom clouds from the biggest weapon known to man. Today, Las Vegas draws a whole new kind of atomic tourist with the National Atomic Testing Museum, a partner of the Smithsonian, which highlights the science, the history, the pop culture and sociology of one of America’s most controversial periods.

Nuclear experimentation didn’t end in the ’50s, far from it. Some high level nuclear waste has a half-life of up to 24,000 years, so in 1997 a three-mile-long, 25-foot-wide hole was bored through Yucca Mountain. Its purpose is to store radioactive waste for the next 10,000 years and beyond. Deep in the Exploratory Studies Facility in the mountain, pellets of spent nuclear fuel held in specially configured metal racks will be sealed in wheeled canisters made of a corrosion-resistant metal.

The project is still ongoing after a number of reversals, but the fate of the Yucca Mountain Repository is in question as review committees make decisions about how to properly dispose of nuclear materials. There were public tours offered in previous years in an effort to sway public opinion, but as of now the only way to visit the federal site is with permission from the government.

The Sedan Crater, the largest manmade crater in America, is the result of a massive underground nuclear test. Part of Operation Plowshare, so named to reflect the use of the destructive energy for good instead of as a weapon, the Sedan explosion was meant to test if nukes could be used to displace large amounts of earth. Clearly, they can. When the 104 kiloton bomb was detonated 600 feet below the ground level, it lifted the ground above it into a dome over 300 feet high before it broke the surface, sending a massive shockwave of dirt cascading from its epicenter. According to the informational site that sits at the site today, over 12 million tons of dirt got blown away.

Today the giant crater is still there in the middle of the desert and is safe to visit, although tours occur only on a monthly basis (you can’t just drop in). A viewing platform for these guided tours has been built on the lip of the giant divot so that atomic tourists can peer down into its depths. A small amount of plant life is even returning to the crater, making it seem a little less bleak.

While no actual atomic testing occurred at this bar, the oldest freestanding one in town, Atomic Liquors is certainly a part of Nevada atomic history. Originally a simple liquor store, a tavern license and rooftop service were added so customers could tipple a few “atomic cocktails” while watching the blasts 65 miles to the north (it being a time before people were aware of the dangers of observing nuclear testing).

All kinds of customers came: Construction workers drank alongside the Rat Pack, Barbra Streisand kicked back with the staff and played a little pool, and casino workers dropped by at all hours to cap off a long shift dealing blackjack. A kind of respite from the glitzier Strip, the Atomic and its classic good looks drew the attention of Hollywood too, eventually appearing as a set location in “The Twilight Zone,” and later in the films Casino and The Hangover.

Atomic Liquors has held down its corner of Fremont Street for over six decades. The bar was restored to its original configuration, with the famous neon kept intact. You can still order up some atomic cocktails, though the view of mushroom clouds is long gone.

"Sky islands," secret caves, and naturally-grown bonsai trees are only a glimpse of what Nevada has to offer.
Sponsored by Travel Nevada
outsider art

There are strange and beautiful creations in the desert and beyond.
Sponsored by Travel Nevada
abandoned

The abandoned treasures of the Silver State.
Sponsored by Travel Nevada

1:52
Sponsored by Travel Nevada
Want to see fewer ads? Become a Member.
From Around the Web
Thanks for sharing!