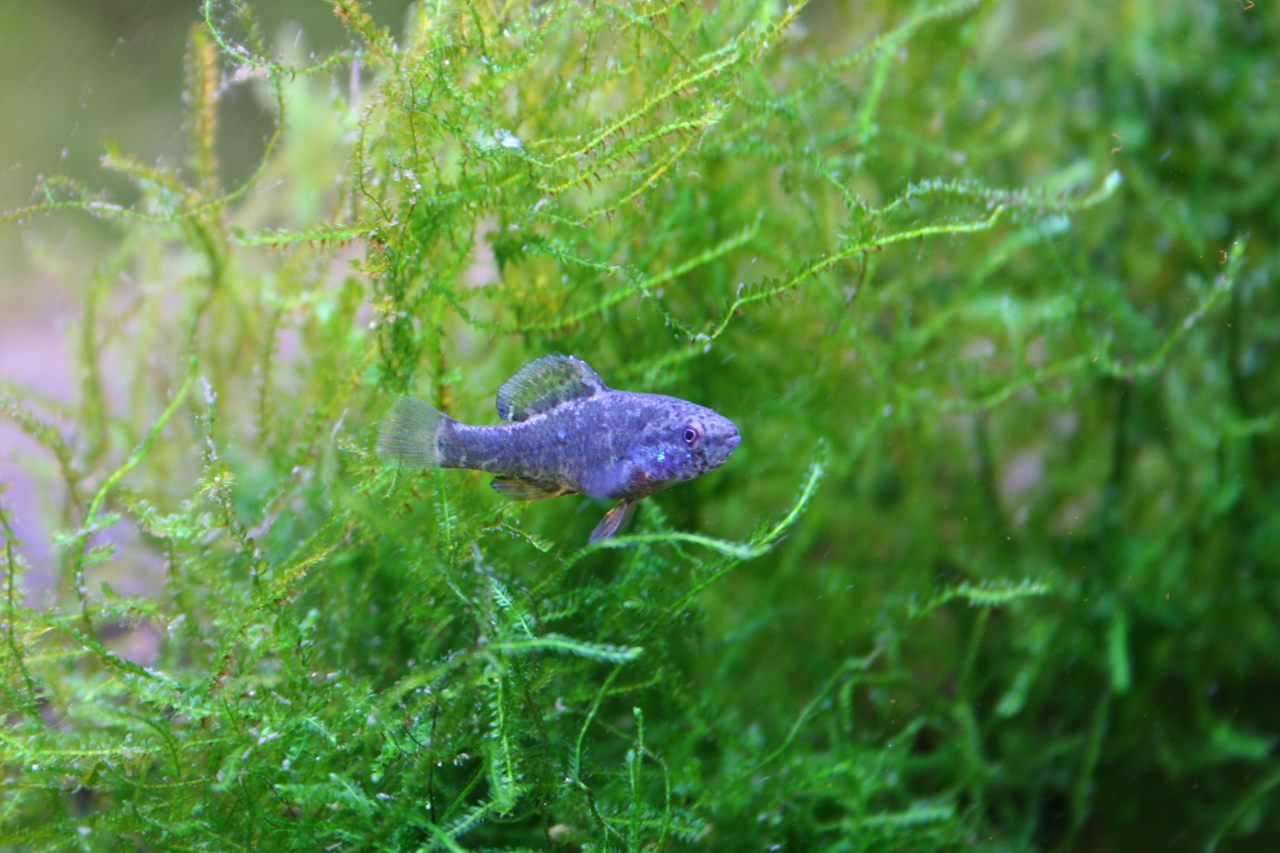 The spring pygmy sunfish, blue and ready to breed. Conservation Fisheries
In This Story
Destination Guide

The spring pygmy sunfish has already been declared extinct two times, and now its champions hope to ensure there won’t be a third. In 1938, one year after the tiny blue fish was first discovered in a spring in Lauderdale County, Alabama, the spring flooded, the sunfish died, and the species was thought to be extinct. In 1941, the fish was rediscovered in a different spring in Limestone County, Alabama. But that population, too, met a similar end, and the sunfish was once again considered extinct. In 1973, the fish popped up once again in the Beaverdam Spring complex near Huntsville, Alabama, where it survives today. “The fact that it’s held on for this long almost compels you to protect it,” says Elise Bennett, a staff attorney at the Center for Biological Diversity.

The unsinkable spring pygmy sunfish is getting a new neighbor soon: a Mazda Toyota manufacturing plant that can churn out 300,000 automobiles each year. A development that size, and the chemicals and soil disturbances that come along with it, could pose a serious threat to the diminutive fish, which has only two populations known to science, Bennett says. In 2018, the center, Mazda Toyota Manufacturing, U.S.A., and the nonprofit Tennessee Riverkeeper reached an agreement protecting the Beaverdam sunfish from a future extinction crisis, conserving 1,100 acres of land and creating a $6 million endowment for the fish’s welfare. The first purchase in the agreement was finalized last month, according to AL.com.

As its name suggests, the spring pygmy sunfish is incredibly small, rarely growing more than an inch. Females are a mottled brown; males are dark with iridescent blue bars across their bodies, and they turn sapphire blue when breeding. It’s picky about where it lives, requiring fresh, clean water near the springhead, Bennett says. The fish take refuge in filamentous, feathery plants, including spineless hornwort and two-leaf water milfoil, which protect both adult and juvenile fish from predators, according to a report from the U.S. Fish and Wildlife Service. Though Alabaman conservationists tend to know about the spring pygmy sunfish, it’s far from a household name. “People will ask, ‘What’s a sunfish, and can we fry it up?’” Bennett says. (Please don’t.)

After the spring pygmy sunfish was originally discovered, at Cave Spring in Lauderdale County, scientists located two other populations, at Pryor Spring and Beaverdam Spring. But over the past century, according to Bennett, these habitats have disappeared or declined due to a whole host of factors: pesticide and herbicide runoff from nearby farms, dam-induced flooding, sediment overflows from nearby developments. In 1984, scientists attempted to reintroduce the sunfish to a section of Pryor Spring, according to a report by the Center for Biological Diversity. The fish survived there for 20 years, but died off in 2008 due to nearby groundwater harvest and an influx of herbicides. (A few years ago, one more surviving population of the spring pygmy sunfish was discovered in Blackwell Swamp, in Wheeler National Wildlife Refuge.)

In 2009, the Center for Biological Diversity petitioned the government to protect the fish under the Endangered Species Act. They partnered with Mike Sandel, a fisheries scientist at the University of West Alabama, who helped secure the fish’s protection as threatened in 2013. But the incoming auto plant, in an increasingly developed Huntsville, seemed to pose a new threat. So the center turned to one of conservationists’ classic “tools in the bag,” Bennett says: buying land and putting it into a trust.

After months of negotiations with the center and Tennessee Riverkeeper, Mazda Toyota Manufacturing, U.S.A. agreed to set aside $4 million for the future conservation of the fish. Nearly 500 of the contracted 1,100 acres have already been purchased by the land trust, Bennett says. No high-impact development, such as lumber extraction, pesticides, or groundwater removal will be allowed in this tract of land, according to the agreement. These new protections will also benefit the other species living in Beaverdam Creek, such as the endangered slender campeloma snail, another Alabama native. “The hope is that, in the future, this land could be a publicly accessible area with trails,” she says. “Or even an educational center.”

Once, while visiting the Beaverdam site, Bennett spoke with a local high school teacher who had studied the spring pygmy sunfish in college, back when the population was so plentiful that you could catch one right under an overpass by a highway. “She said she thought about those fish all the time, that she’d bike by a few times a week and stop by the spring,” Bennett says. She often thinks of the tiny, resilient fish when she has a bad day. “You remember the sunfish has been hanging in there, and you know you can, too.”

Scientists and schoolchildren worked together to bring the tequila fish back from extinction.
zoos

Can a Salamander Find Salvation in San Antonio?

A zoo lab's successful captive-breeding program may be the best hope for this critically endangered amphibian.
architecture

For Sale: A Sprawling Carriage Factory and the House on Its Roof

How a Tiny Plant Made a Big Comeback in West Virginia

The running buffalo clover may soon be removed from the endangered species list.
Video • Object of Intrigue

2:48
Want to see fewer ads? Become a Member.
From Around the Web
THE GASTRO OBSCURA BOOK
Taste the World!
An eye-opening journey through the history, culture, and places of the culinary world. Order Now